Lights in the Sky Over I-80, Near Sacramento

Hello, I am here in the hopes of being debunked. I am but a simple yokel with a respect for science, and have a short fuse for conspiracy theorists. So this leaves me in quite the conundrum. Lol.

We were in the backseat of a car driving on I-80 East - departing Vacaville, headed towards Dixon, of northern California. It was night.

I was staring out the window - above empty fields, free of city lights or buildings - and observed a light traveling. It appeared to be a plane due to its light, how high it was in the sky, the rate of speed it was traveling.

...Was it above the field? I have no idea. In the same way, a constellation isn’t directly above your backyard just because you’re viewing it there. It could have been somewhere much further south. I am using the fields because that’s the *direction* we saw this. Point is, the thing was high.

Then I noticed more of these lights - varying in altitudes, traveling somewhat fast (again, like a plane).

It looked like they were planes traveling a great distance apart - e.g. if one "plane" was over Sacramento, another might have been flying over Fairfield.

I cannot recall an exact number of lights - at least 3, but no more than 10.

One of the lights travelled in a north east direction at wild speed. Stupidly incomprehensibly fast. On the image, this is depicted as a yellow dot over the town of Dixon - for all I know, it could have been over Lake Tahoe. Where is besides the point - this thing was hauling ass, and then it stopped on a dime. Even as a kid I realized that’s not how planes work.

Note that we were traveling along the purple arrow. 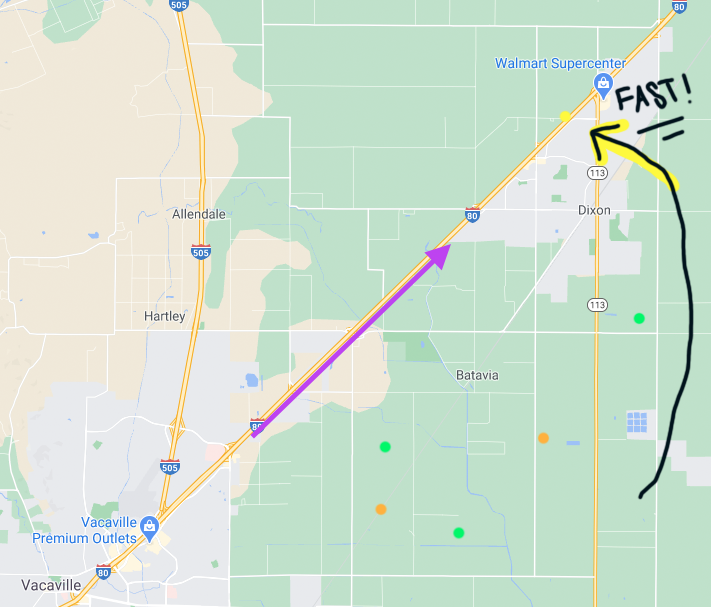 The lights that were still in the southern sky were beginning to behave similarly. The paths of travel were smooth. Sometimes back and forth, sometimes up and down. Nothing shaky.

By this point my sibling and I have our faces pressed against the window and are hollering at our parent to look but they were driving.

The lights, all at once, travelled to a central point in the southern sky. The lights created one much larger light, colors changing rapidly.

Then - the thing went down and disappeared from sight.

We got home, confused and spooked. We told our other parent, they believed our account and called the police to see if any craft went down in the fields. They never found anything. i remember feeling relief that our parent took us seriously, realizing how crazy it sounded.

So, a couple of points here….

1) I have never ruled out it couldn’t be military technology - there are Air Force bases in the area. But no such military tech exists that can duplicate what we saw.

2) I never really talked about it when I was younger because as far as I knew, UFOs were round cartoonish things with little green men. This didn’t fit the description of what I knew to be a “UFO."

3) Over the years I have considered - perhaps the lights weren’t coming together and going down…perhaps they all reached an equal, low altitude, and sped off straight into the horizon, giving the illusion of going down. (Does that sound plausible?) If this doesn't sound plausible, then i believe it only could have come down to land.

4) It wasn’t until I was an adult I heard people describe the same exact thing I saw (on Reddit). People described different colored lights flying at outrageous speeds, changing colors, then coming together all at once.

The last point threw me into the world of UFOs and UFO enthusiasts. I was eager to see what others have found as proof.

After a couple years of having this as a casual interest, I am disappointed in the UFO “community.”

I REALLY want to know what I saw! If it’s man-made tech, great. i just want the truth.

This mission of mine is impossible because the community makes me want to smash my face into my keyboard. Debunking SHOULD be encouraged to rule out what these things are not. But that’s not what they do. They discourage objectivity.

I do believe others have seen the same thing I saw. And I don’t think we’re crazy for that. My story wasn't influenced by knowing of these things at a subconscious level because i didn't know, and my story has stayed the same all these years later.

There are videos that really DO look like the phenomena, no doubt - it is easy to want to cling to these. I was quick to believe some of the military videos that have come out until I discovered Mick West.

Hence how I found myself in this forum.

Anyhow - colorful lights, being all weird, zipping around in the sky - ideas?

Staff member
Have you ever seen a video that resembles what you saw? Even something in the movies?

I'm seeing two airports in the general vicinity/ahead. To the east seems to a tiny dirt strip, not likely to be in use at night. Ahead on the left is UC Davis Airport, but it seems to be for small aircraft and I don't know how active they might be at night.

There's a chance that if you were looking to the right, you were seeing a reflection of lights on your left or ahead on the left. Some of the colors you mention are not aircraft navigation light colors.

Maybe you were looking to the right, and seeing a reflection of lights in a vehicle passing in the left lane, or on an overpass?

What was the apparent size of these lights? If you held an object in your hand with an outstretched arm... which object would be just big enough to cover the lights?
-a bb
-an aspirin tablet
-a dime
-a quarter

Imagine pointing to at these lights. Would you be pointing:

Were all the lights traveling in the same direction as your car was traveling? Northwest in other words?

What time of year was it? Winter? Summer?

I saw what you wrote about military traffic and the air bases but I think it should be mentioned that Travis AFB is just south of Vacaville. It sits at the centre of A-682, an Alert Area, which, to quote the Federal Aviation Administration 'is airspace wherein a high volume of pilot training or an unusual type of aeronautical activity is conducted.'

It's the somewhat rectangular area bound by the red hash marks. Vertically, it extends from the surface to 3000 ft south of the extended runway centrelines (which are more or less parallel to I-80) and from ground level to 6000 ft to the north. It's in use Mon-Fri from 8 am to 9 pm. You would have been looking directly at it.

This is taken from https://wingsflightschool.com/document/2017-Travis-AFB-ACA-Pamphlet.pdf, a small PDF with information about the area for private pilots intending to fly in this region.

This is an interesting graphic from https://riovistacity.com/airport/documents/travis-atc-procedures.pdf. Sadly it doesn't go into any details but I would assume that the black lines are ground tracks of departing and landing aircraft. Note how they appear to fly parallel to the highway before turning 90 degrees in the vicinity of Dixon.

This is of course all based on relatively recent information and it might well have been different back in 2004. I did however find a discussion on A-682 at https://narkive.com/mV6SstEO, dated Oct 2006.

Something to consider is that your recollection, and indeed your initial perception, might not be the best, as you were so young.

You were on a long dark straight stretch of road, in the back seat. So the reflections of car headlights, from cars traveling alongside you, would have been fairly fixed in position, and occasionally shift around as the car overtook you (or you it).

So perhaps you just saw a reflection of a car, or multiple cars, or a large truck, with some lights that, in reflection, looked like they were flying in the sky. Or some other cars on another road.


There are times when the lights out the window, looking forward and right, move strangely.


Not that it was this exactly (there are many angles and light sources possible), but your bored young minds might have fixated on something like this and misinterpreted it.