Is this sparkling effect a known CCD or lens aberration?

Staff member
It looks like a mylar star-shaped balloon sparking in the sun. The wavy shimmering is a combination of lack of focus and turbulent atmospheric distortion. It's somewhat related to the shapes that stars can make when viewed a bit out of focus.

I've seen a lot of UFO videos in which the person taking the video says, "It's not a..." when that is exactly what it is.

Thank you. That's about what I thought.

The sharpness is what I'm interested in. In the first example in particular, how does an out of focus object end up producing razor sharp edges in the recording?

Is that a failure/feature of the way CCD's function? Software processing?

The short answer is "diffraction spikes."

the process by which a beam of light or other system of waves is spread out as a result of passing through a narrow aperture or across an edge, typically accompanied by interference between the wave forms produced 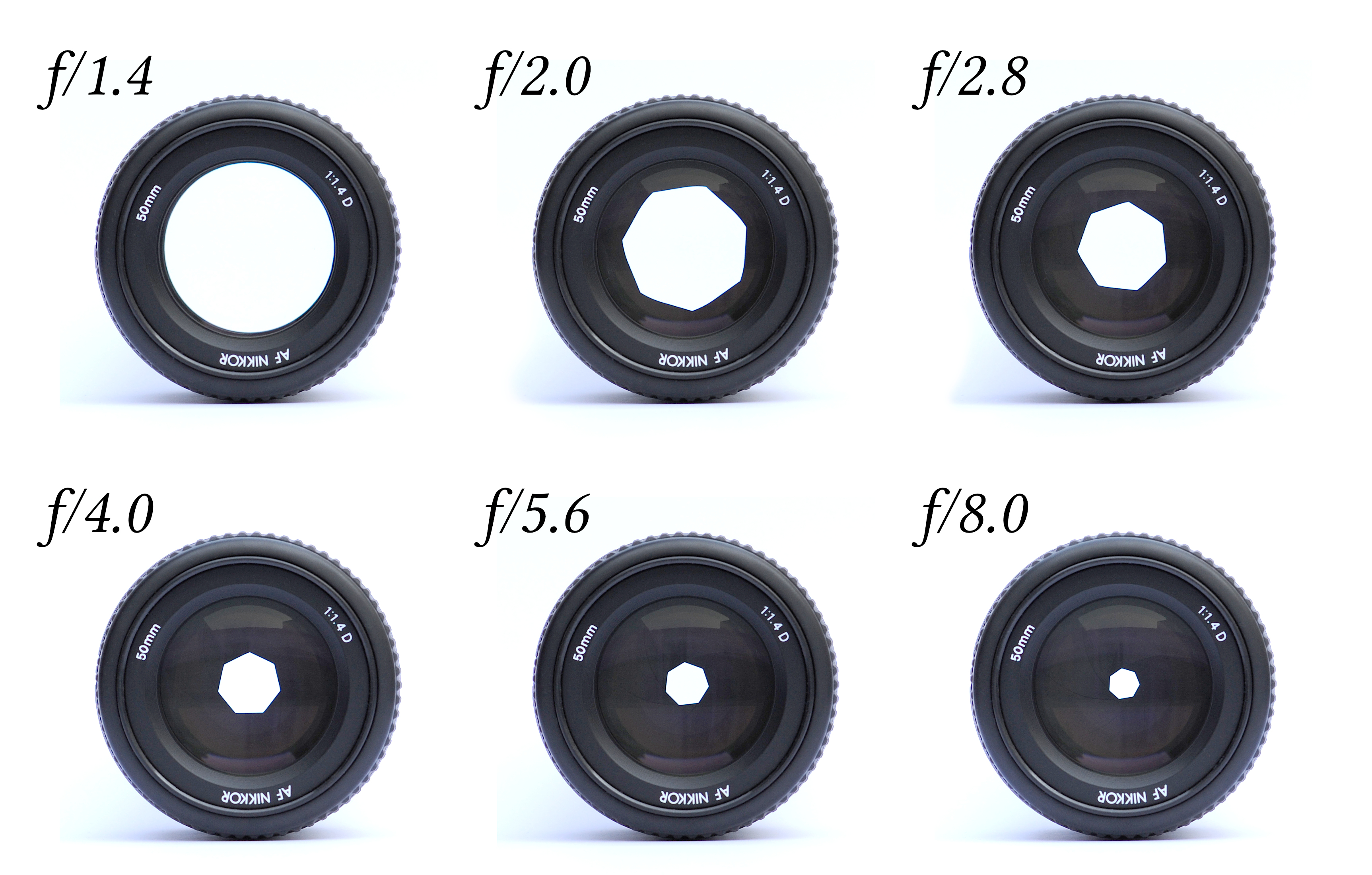 You still get this effect even though the image is out of focus.


The most familiar example of this kind of thing is the sunburst. 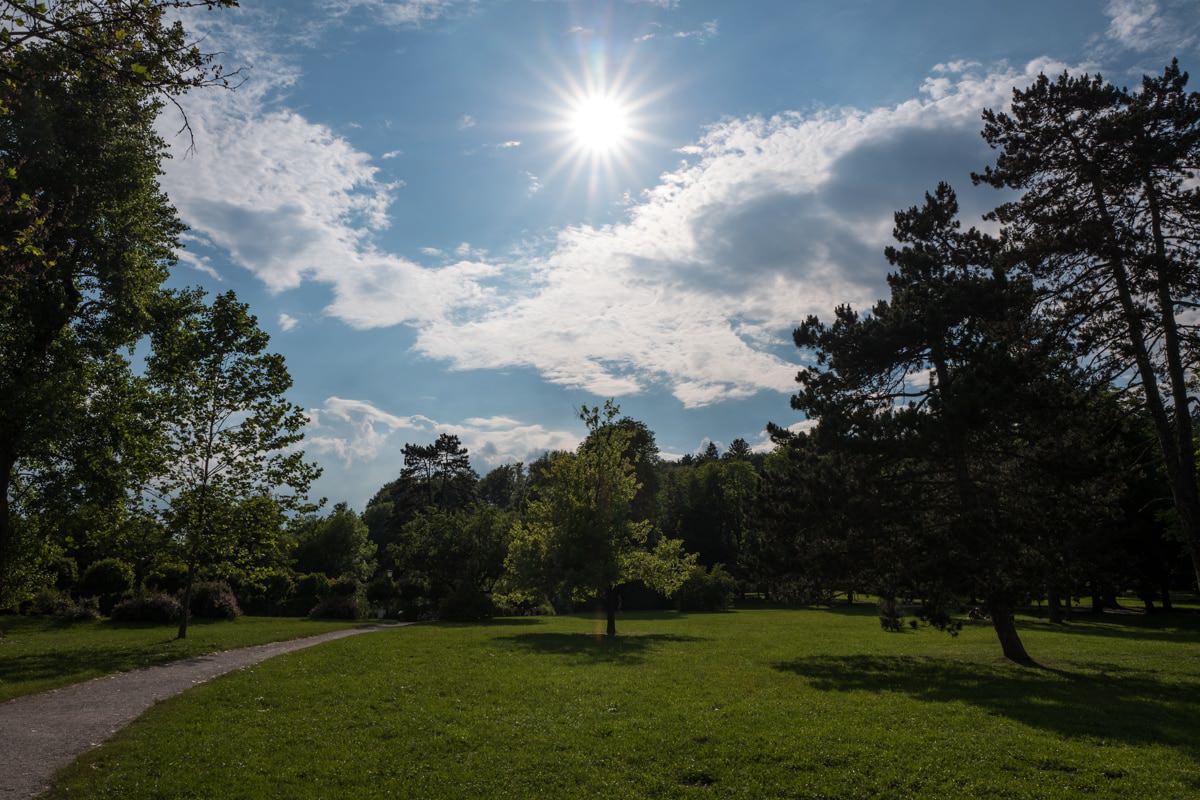 The appearance of sunbursts is more technically described as “diffraction spikes,” and it’s caused by the bending (sometimes referred to as spreading) of light around an object like the edges of your camera’s aperture.


The camera was getting multiple specular reflections of the Sun off the surface of the Mylar balloon at the same moment, like sparkles on water.

So there was a certain amount of chaos - the sparkles, atmospheric turbulence and poor focus.

And a certain amount of order - the straight edges of the aperture vanes causing diffraction spikes. 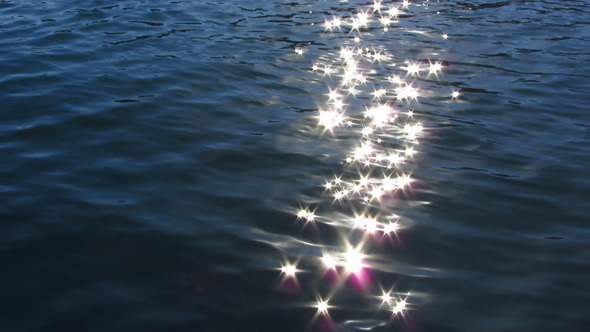 Each sparkle is an image of the Sun. A specular reflection of the Sun.

So, the one option I forgot to type. A lens artifact?

Thank you, very much. So excellent. Not being an experienced optics or camera person the search terms eluded me.

Is this effect more likely to occur on something like a cell phone camera lens or is it more dependent on what's being imaged no matter what type of lens is used?


It's most noticeable with bright light sources and straight edges in the path of the light. 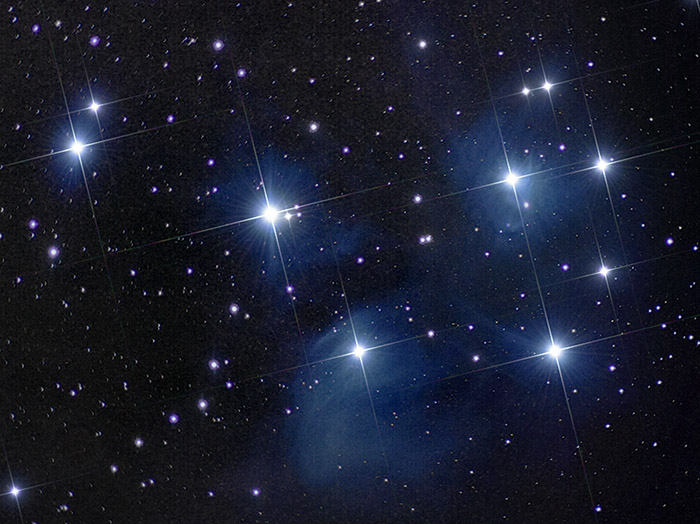 These diffraction spikes are caused by the support vanes of the secondary mirror in a Newtonian telescope. 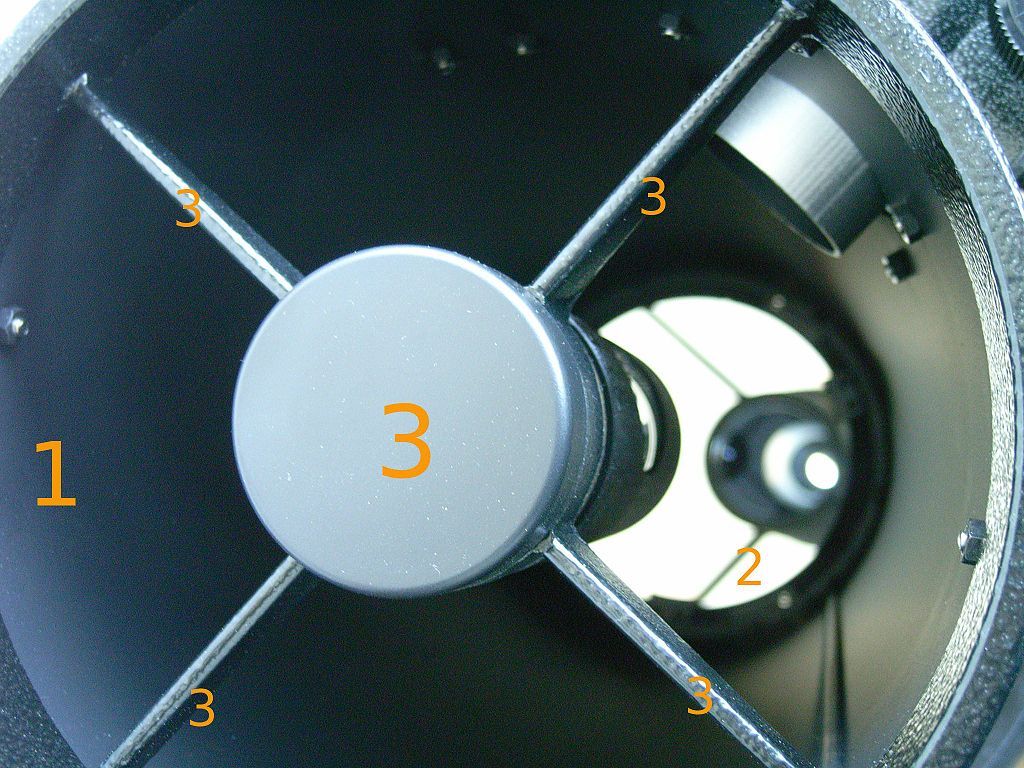 Bear with me, just to make sure I'm getting this, would it be fair to say that in a typical camera lens the wider the aperture diaphragm is open the the less likely there are to be diffraction spikes?

And the irregular surface of the Mylar balloon contributes greatly to the effect, a smooth chrome ball would produced the same effect but it would essentially be just one starburst?

And if I'm understanding correctly most mobile phone cameras, other than higher end models, have a fixed aperture.

That makes me wonder why there aren't a lot more cell phone UFO videos that show diffraction spikes when imaging something bright and highly reflective in the sky.

I doubt that the John Graf video was taken with a cell phone camera. He wasn't someone surprised by something odd in the sky. He's going out expecting to see UFO's, so probably has equipped himself with a dedicated camera.


I captured this object right after we did a calling during our LA UFO CHANNEL meet up. Our group gets into a semi-circle and concentrates on a spot in the sky....we don't say anything ...with just think and ask if we can see the beings in the sky. They show up usually very quickly most times. UFOs are not always flying saucers. I am seeing many kinds of life forms.

There are also clear videos of "chemtrails" on his channel.

I suspect the John Graf video was taken with a camera with a small sensor and a lens that can be zoomed to a high magnification (anywhere from 20x to 60x) but with poor resolution. Something like the infamous P900.

The specular reflections of the Sun (sparkles) is a complex issue. If the image were in focus and the balloon a lot closer, you wouldn't see nearly as many. At any one time there seem to be just one or two. (Complicating that... if you could look at those reflections up very close, you'd see that each one was made up of multiple separate but close reflections. But we wouldn't see that at any distance.)

The reason we see so many is because of focus and atmospheric turbulence.

I don't know exactly why poor focus causes bright light sources to "break up" into multiple images. I can tell you that before my eyesight was surgically corrected I had extreme myopia. Without my glasses on, bright lights at night looked like aerial fireworks - a burst of separate lights.

The atmospheric turbulence causes a refraction effect - terrestrial scintillation. If I'm right, and this is a dedicated camera with a lens capable of fairly impressive magnification, this balloon was a good distance away. There's a lot of air between the camera and the balloon.

scintillation is caused by the passing of light through different layers of a turbulent atmosphere. Most scintillation effects are caused by anomalous atmospheric refraction caused by small-scale fluctuations in air density usually related to temperature gradients.

Why is the image out of focus? Probably because the camera is in auto focus mode. Auto focus depends on a difference in contrast. The balloon image is small and the sky is just a uniform field. There's nothing the auto focus can work with.
Last edited: Aug 1, 2019

Getoffthisplanet said:
Bear with me, just to make sure I'm getting this, would it be fair to say that in a typical camera lens the wider the aperture diaphragm is open the the less likely there are to be diffraction spikes?
Click to expand...

I don't know that.

A bit too short of an answer There's also bokeh, focus, atmospheric turbulence, and multiple reflections.

Here's a similar reflection of the sun I photographed ten years ago. 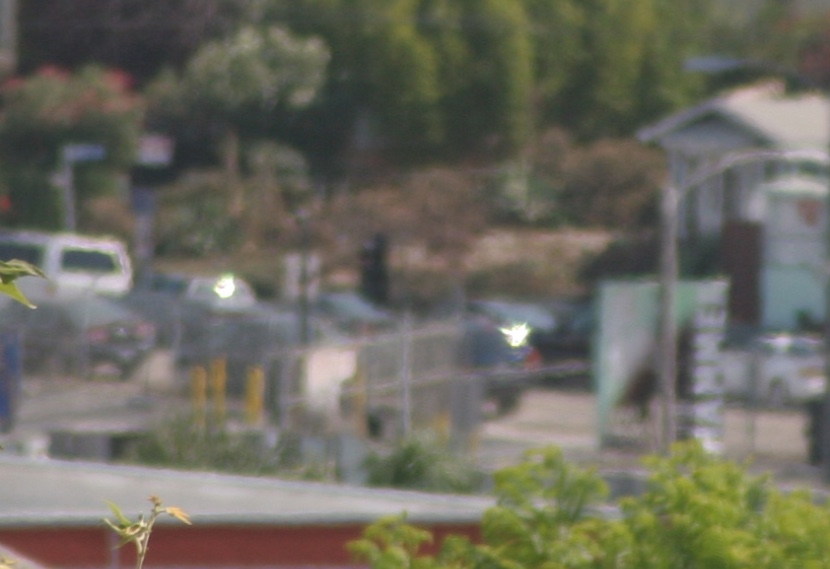 (there's two, but the one of the right is more similar) 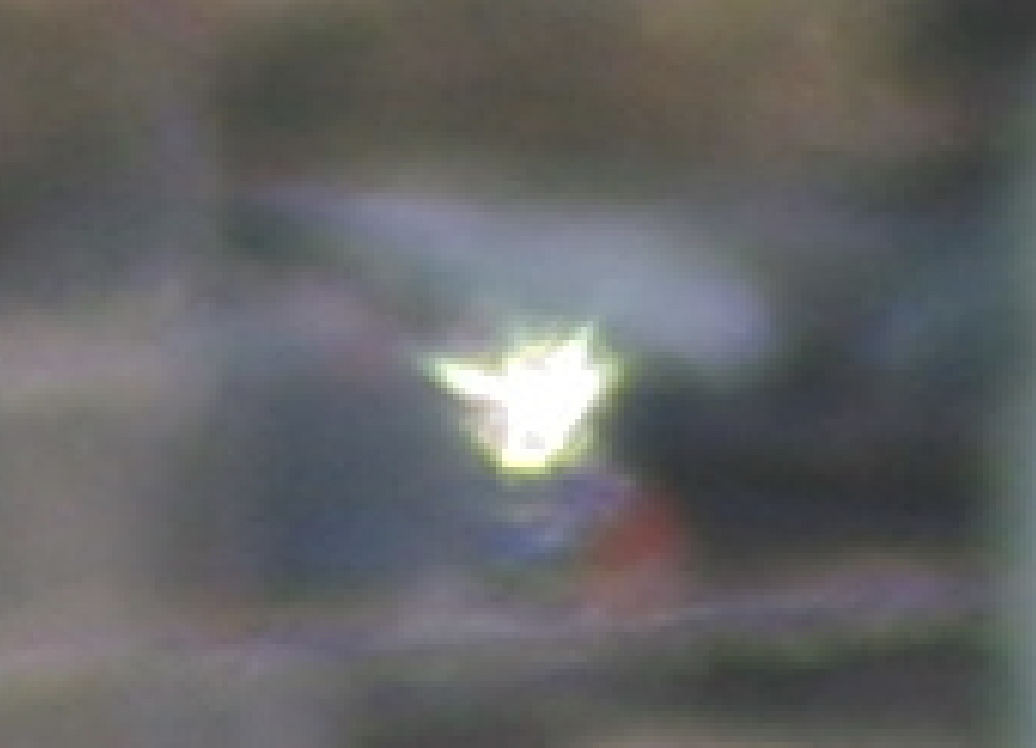 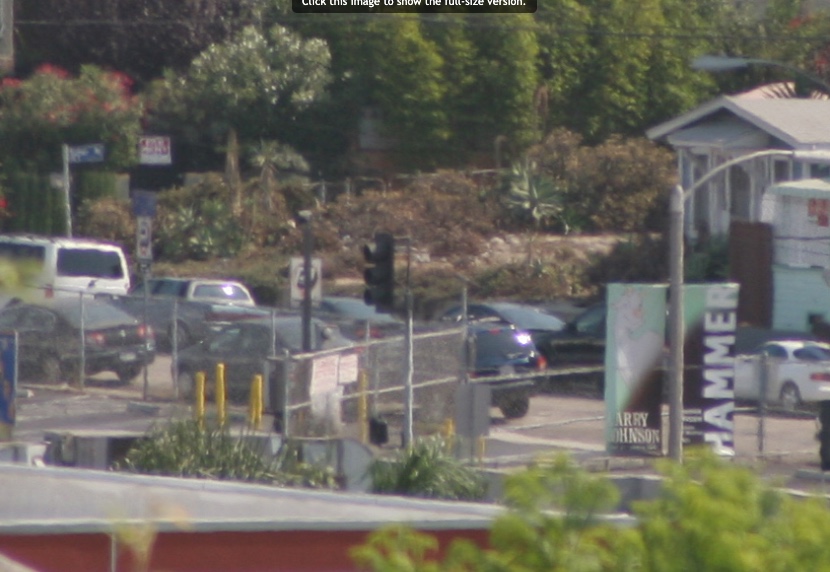 And with less focus: 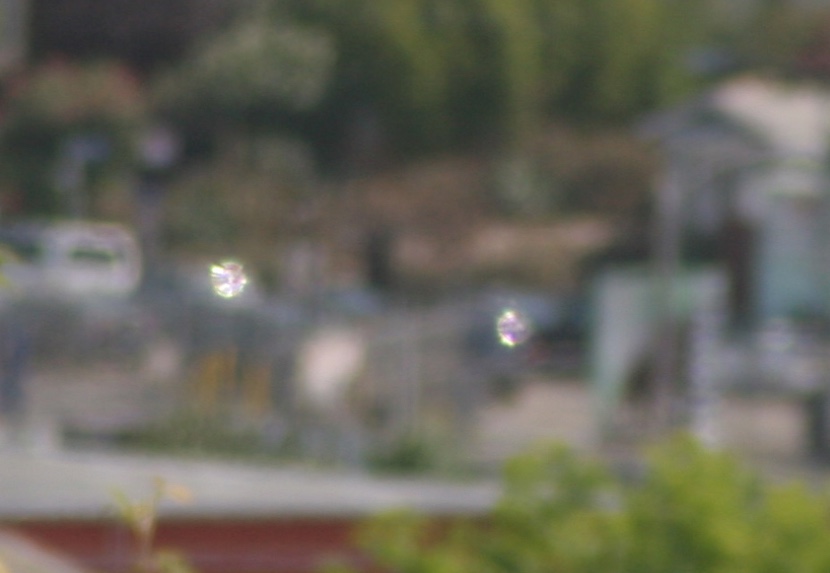 Atmospheric turbulence distorts the shape, but only for things that are far away.

Mylar balloons don't always create a single reflection (especially star shaped ones), so you can get two or more shapes overlapping and continuously changing because the balloon is moving through the air, and changing position.

Well, remember that this was an answer to the question

Getoffthisplanet said:
The sharpness is what I'm interested in. In the first example in particular, how does an out of focus object end up producing razor sharp edges in the recording?
Click to expand...

I've addressed the other issues.

Z.W. Wolf said:
I suspect the John Graf video was taken with a camera with a small sensor and a lens that can be zoomed to a high magnification (anywhere from 20x to 60x) but with poor resolution. Something like the infamous P900.
Click to expand...

here's his event page. I don't know if that's him with the camera in front. (a different day i assume) 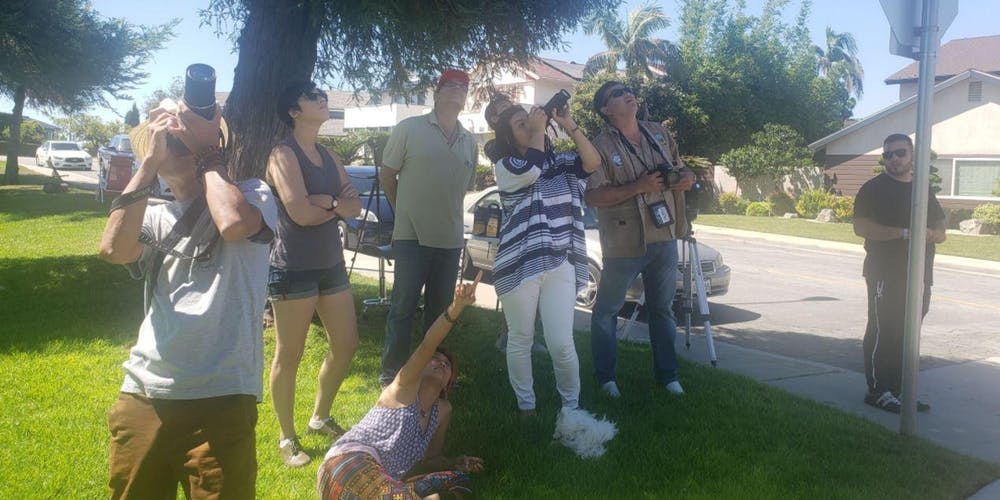 
heres another video they took in Hollydale Park. (pretty amazing they can guarantee a UFO spotting ) More obviously a balloon with sparkles.
Source: https://youtu.be/w_DPFlH0ULM?t=9

Mick West said:
It looks like a mylar star-shaped balloon sparking in the sun
Click to expand... 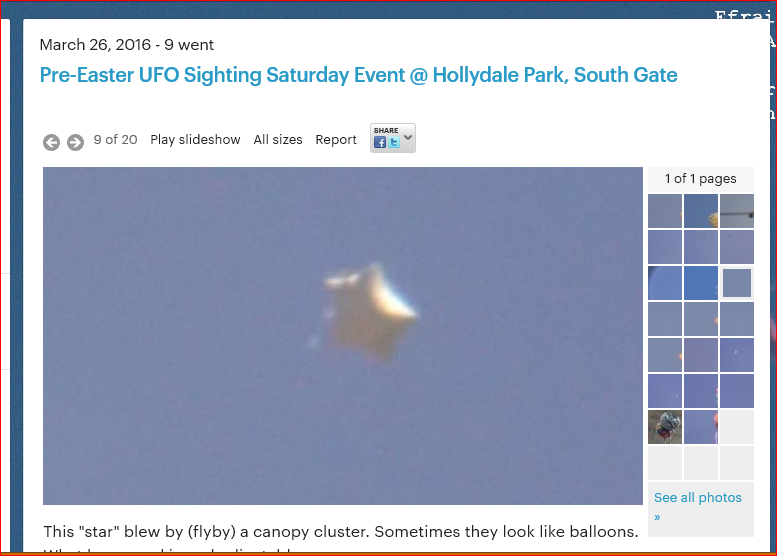 so this UFO group is just a satire site? what's happening? 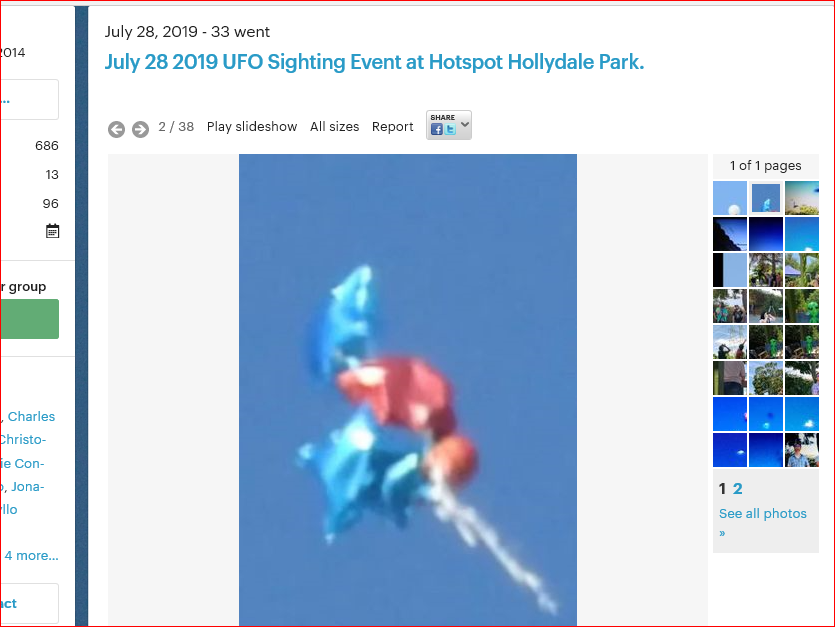 deirdre said:
so this UFO group is just a satire site? what's happening?
Click to expand...

I suspect they are serious. John Graf is someone I met years ago in Los Angeles, at the "Consciousness Beyond Chemtrails" conference, and at a chemtrail march in Santa Monica and the Venice Boardwalk . He's corresponded with me a few times since, and seemed very serious that he thought chemtrails were real, and his photos showed undeniable evidence. So after 20 years of that then sadly the "balloons are UFOs" belief is not that large a leap.

Mick West said:
then sadly the "balloons are UFOs" belief is not that large a leap.
Click to expand...

yea but he posts (or someone is posting) very obvious balloon pics. I can see far away balloons that are hard to make out, but come on. Plus he has to be releasing the balloons himself (or a buddy) because no way there are "runaway" balloons everytime he goes to Hollydale Park.

deirdre said:
yea but he posts (or someone is posting) very obvious balloon pics. I can see far away balloons that are hard to make out, but come on. Plus he has to be releasing the balloons himself (or a buddy) because no way there are "runaway" balloons everytime he goes to Hollydale Park.
Click to expand...

Maybe, but I think if you sit in a park anywhere inland in LA for a few hours at the weekend on a nice you are actually quite likely to see a balloon. People are always having parties. Hundreds if not thousands of helium balloons are sold every week, some of them go free, and LA has a consistent wind from the west blowing them inland.

The "summoner" Robert Bingham, seems quite serious. He posts lots of videos of out-of-focus mylar baloons in the sun, and says they orbs and angels.
Source: https://youtu.be/VesL8ReaQSI?t=288

Yeah, I was about to make similar remarks including the onshore breeze in the afternoon. (Grew up there.)

I've been looking at the Jay Lee YT channel. Jay Lee seems to be a part of the same "community" of people who gather at that park. He's got albums full of stills from his videos which are obvious balloon images. He remarks in one video that he is being "harassed" by people who identify the objects as balloons. He speculates that these UFOs are either mechanical or biological. If biological he seems to be speculating that they are mimicking balloons to avoid birds because birds are mean.

He has an ETX-90 telescope, which is a decent little beginner scope. Just as an aside his videos always show ridiculous amounts of hair and crud on his optics.
Last edited: Aug 1, 2019

After a long time of disinterest I really only started paying attention to UFO videos again because one day a few months ago it dawned on me just how many regular people are uploading them.

There were always the wonderfully photoreal, yet obviously CG fakes, but these days there doesn't seem to be quite the same sort of stigma attached to posting and discussing UFO videos as there was in the past.

I've seen a lot of these videos with that sparkling, scintillating, flashing phenomenon and knew it was a camera effect but lacked the experience to accurately describe the cause.

Thanks all for the information and education.

There are entire Youtube channels with dozens and dozens of videos devoted to exploiting this lens aberration;

The idea seems to be that the mysterious "they" who live in the sky have made a copy of a balloon. It's a good copy, but Bingham is pleading with us to take a really good look at it and notice that it's an imperfect copy.

Those fiendish aliens. Using their awesome technology to disguise themselves as balloons and hang around birthday parties.
You must log in or register to reply here.