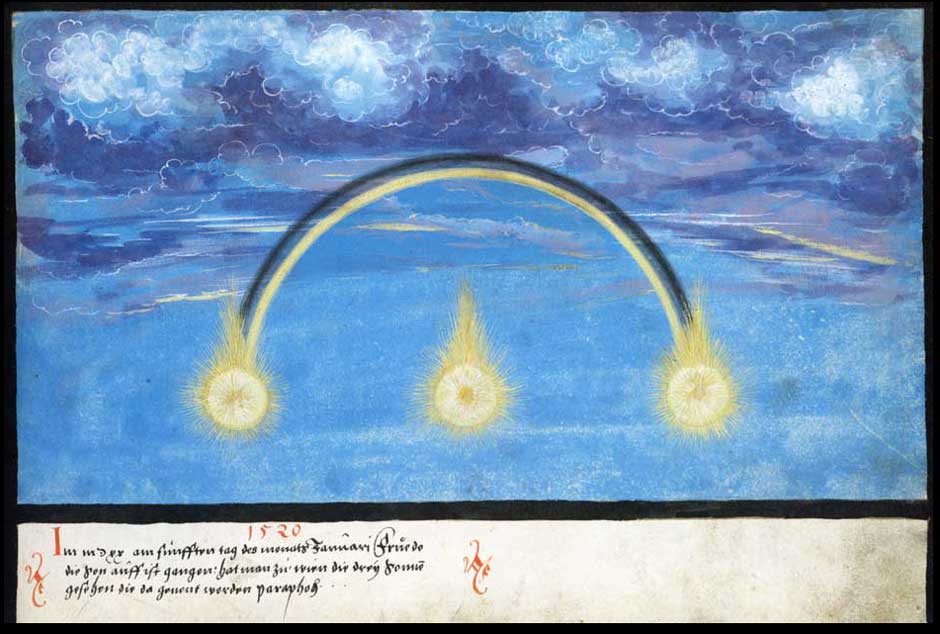 The above image is one of the earliest representations of a solar halo and two sun dogs (also called parhelia, or "mock suns"). It's dated 1520 and is from the 1552 The Book of Miracles, the German 16th-century manuscript of supernatural phenomena, and looks like it was painted from memory, or from a verbal description. Here's a more modern photograph of a similar configuration 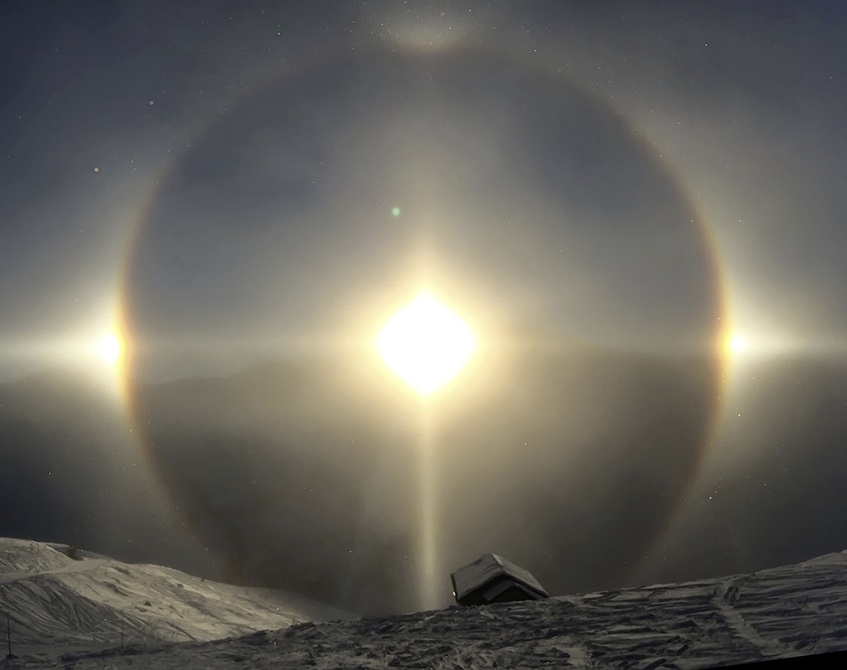 Halos and sun dogs are formed by ice crystals refracting the light of the sun. They form at specific distances from the sun (due to the angles of the crystal, and the degree to which it bends light). The most common (and smallest) halo forms at 22° around the sun, and hence is known as a 22° Halo. Sun dogs form on either sides of this halo, level with the sun. Sometimes they look like small segments of a rainbow, and sometimes they are very bright, almost as bright as the sun (especially if there is some cloud in front of the sun

People's experiences with halos and sun dogs varies by individual. I remember quite vividly the first time I saw a halo, in 1996, somewhere near Fresno, California. I saw them occasionally when living in Los Angeles, but I noticed a distinct increase in the frequency when I moved 350 miles north to the Sacramento region.

Many people don't notice halos simply because they are so close to the sun, and people avoid looking at the sun, because it hurts your eyes. Halos are best observed when part of the sun is obscured, or indirectly with a digital camera.

In this excellent time-lapse video, Patrick Roddie documents the occurrence of halos on 21 days in March 2015.
Unfortunately Mr Roddie incorrectly describes the halos as "sun dogs", when in fact no sun dogs appear in the video. But from this we can deduce that halos are fairly common in San Francisco in March, and sun-dogs less so.

But what does history tell us about the frequency of halos and sun dogs? There's quite a history of descriptions of these phenomena, going back hundreds of years.

The oldest reference to halos and sun dogs is from Aristotle's meteorology, which was written over two thousand years ago. While his speculation about causes might be a bit off, his observations are fairly accurate. He has quite a long section on this topic.
http://classics.mit.edu/Aristotle/meteorology.3.iii.html

Let us now explain the nature and cause of halo, rainbow, mock suns, and rods, since the same account applies to them all.

We must first describe the phenomena and the circumstances in which each of them occurs. The halo often appears as a complete circle: it is seen round the sun and the moon and bright stars, by night as well as by day, and at midday or in the afternoon, more rarely about sunrise or sunset.
...
Mock suns and rods are always seen by the side of the sun, not above or below it nor in the opposite quarter of the sky. They are not seen at night but always in the neighbourhood of the sun, either as itis rising or setting but more commonly towards sunset.


A Goodly Gallerye with a Most Pleasaunt Prospect: Into the Garden of Naturall Contemplation, to Behold the Naturall Causes of All Kynde of Meteors, William Fulke: 1563
" (with an archaic spelling, "Halon"):
http://books.google.com/books?id=ebpCAQAAMAAJ&vq=halo&pg=PA34#v=onepage&q&f=false 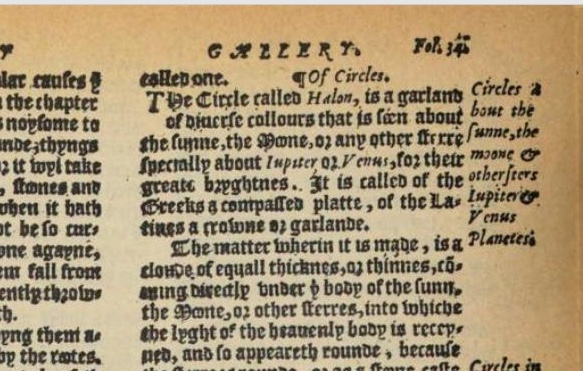 The Circle caled Halon, is a garland of diuerse collours that is seen about the sunne, the Moone, or any other sterre. 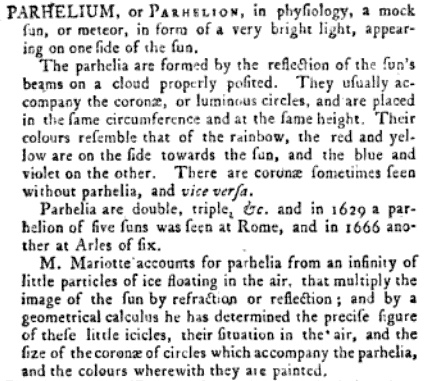 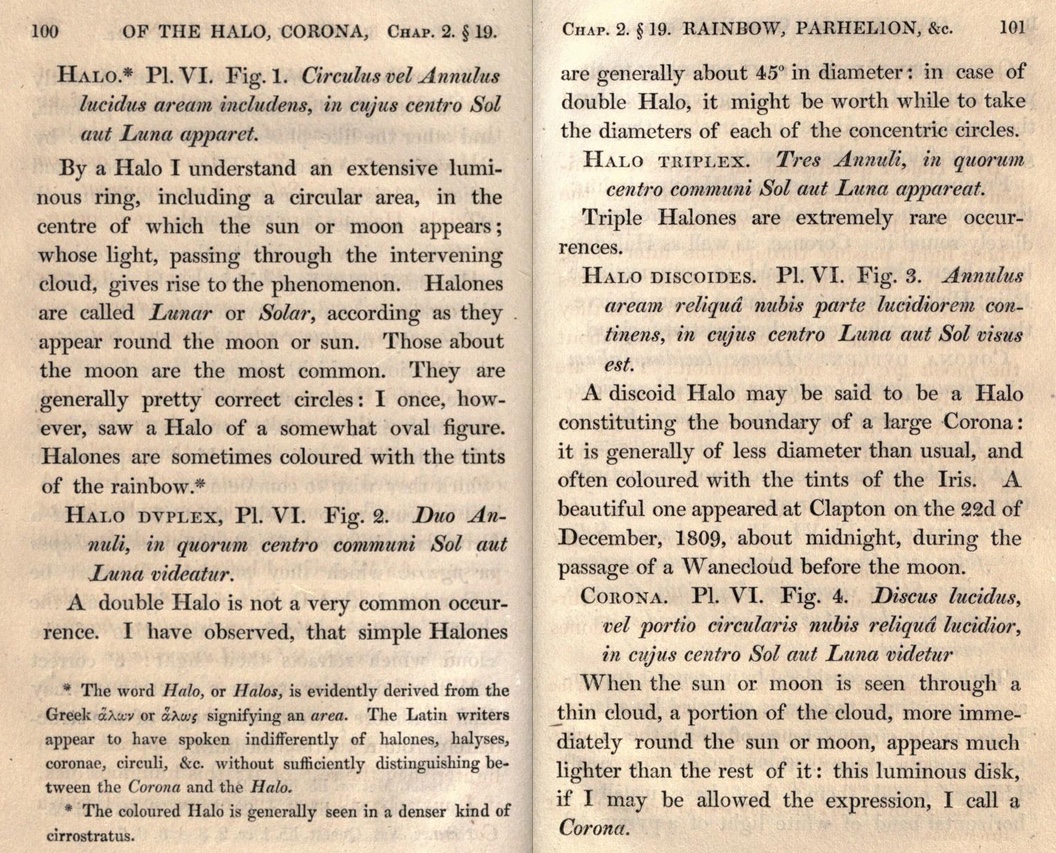 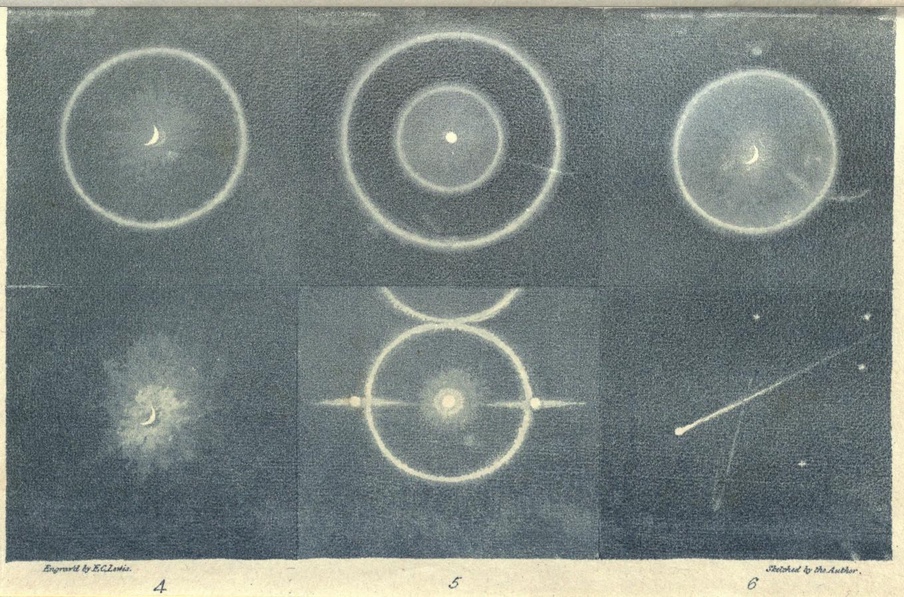 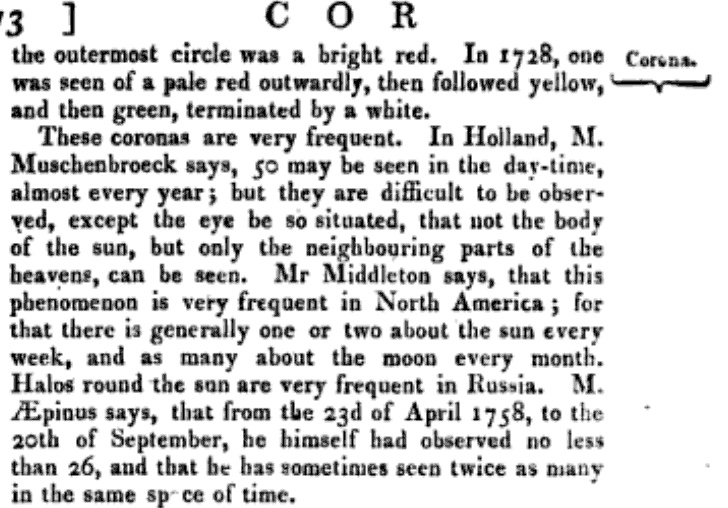 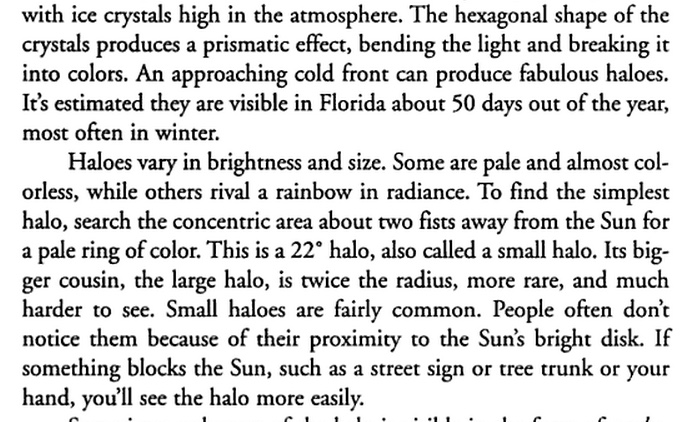 The Atmospheric Optics web site give figures for the frequency of the various types of halo in days per year, with the 22° halo being 100 days per year, which is about twice a week. Parhelia (sun dogs) are seen once or twice a week. This will vary by location and time of year.
http://www.atoptics.co.uk/halo/whyinfr.htm

The figures are also averages. This does not mean you will see halos exactly twice a week. You might see none for a month and they see them every day for two weeks. See: http://personal.inet.fi/koti/luuk3/halot/
Last edited: Oct 22, 2018

The Nuremburg UFO 'battle' of 1561 could well have been a combination of these halos and arcs. Ancient Aliens Debunked has an interesting article on the subject. http://ancientaliensdebunked.com/nuremburg-ufo-battle-debunked/

Was this one of the earliest mentions of a solar halo? The Book of Ezekiel is thought to have been written around 590 BC. Not long before the Greeks mentioned them. 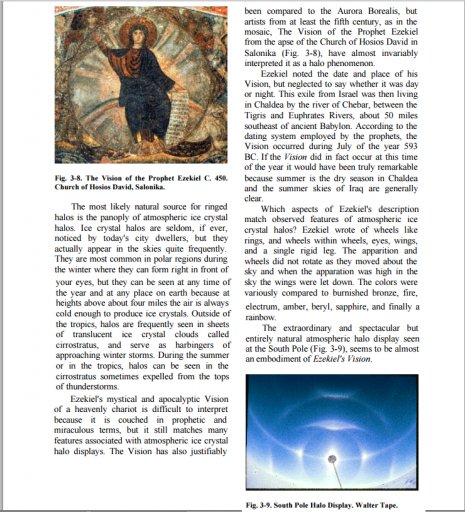 Earthquake lights. We did have an event not long and not too far (200 miles, from Patrick's POV, of course, as far as I know they were unrelated.
http://earthquake.usgs.gov/earthquakes/eventpage/ci37528064#general_region 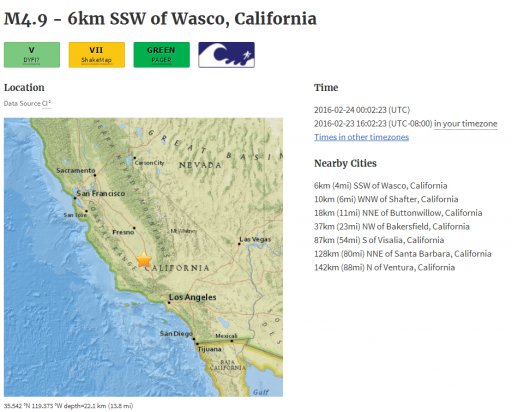 It seems, atmospheric conditions throughout a good portion of California were conducive for refraction and diffraction events to occur. I caught this sundog a few minutes before 5:00 pm, 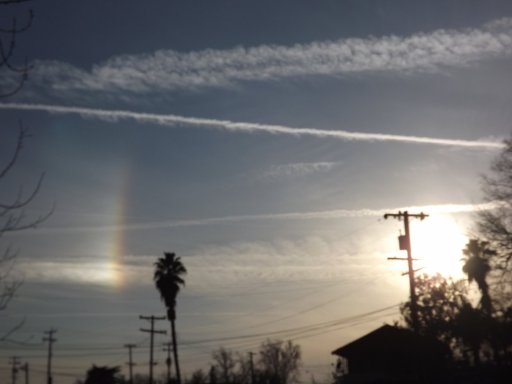 Using the method describe on http://www.atoptics.co.uk/halo/circular.htm

It was a sundog, with a portion of a 22° halo. It faded quickly, as the sun sank. 3 minutes later another "rainbow" appeared double the distance, away, it wasn't as brilliant, and you need to look close. 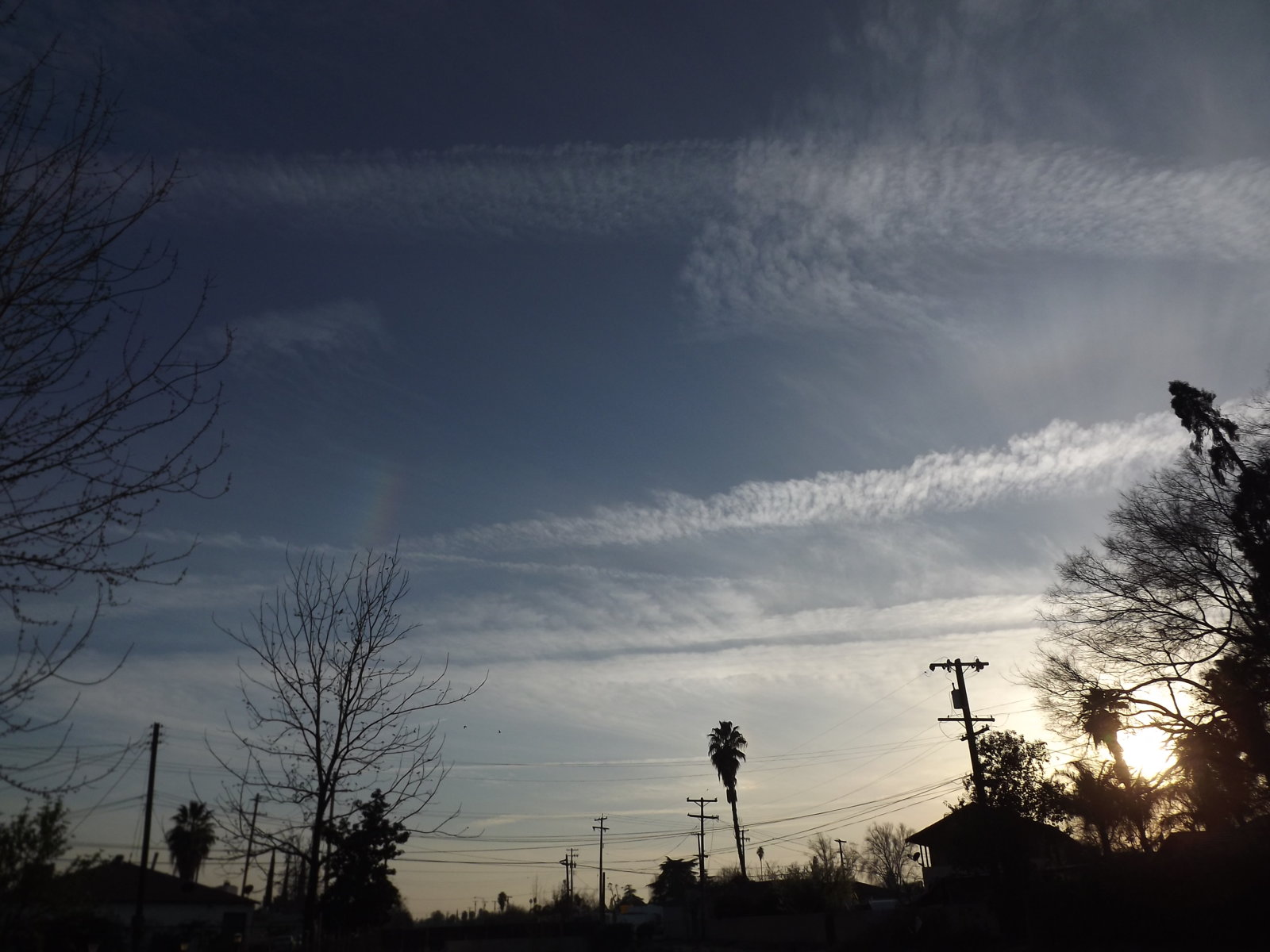 Last night, the reaction to this atmospheric phenomenon wa a bit different. Last night, for the first time, people in my area first reported to the news stations, how they looked up to the sky and found something wrong.

This is one of the most interesting reactions to the sundog, I've found. 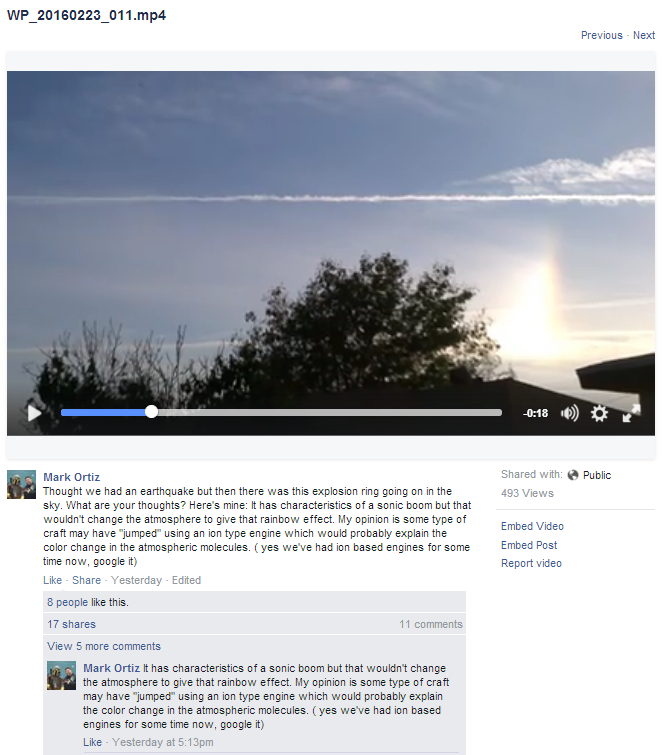 Actually I have seen more around the moon than the sun.

john Mont said:
Actually I have seen more around the moon than the sun.
Click to expand...

They are much more noticeable around the full moon, as they are against a darker background. But there's probably more around the sun, just fainter - and then the sun is "full" every day.

Halos and sun dogs are not the result of individual molecules though (which would cause scattering), they are the result of relatively large ice crystals, which cause refraction.

Sorry, yes, I was being obtuse - my point was the Facebook poster leapt to the conclusion that this was "an ion engine jumping" despite obviously having a tenuous grasp on basic scientific principles and terms.

The second search term would at least have eventually led him to, umm, enlightenment but confirmation bias is a very real thing.

Meterological Observations made during the years 1840 to 1888 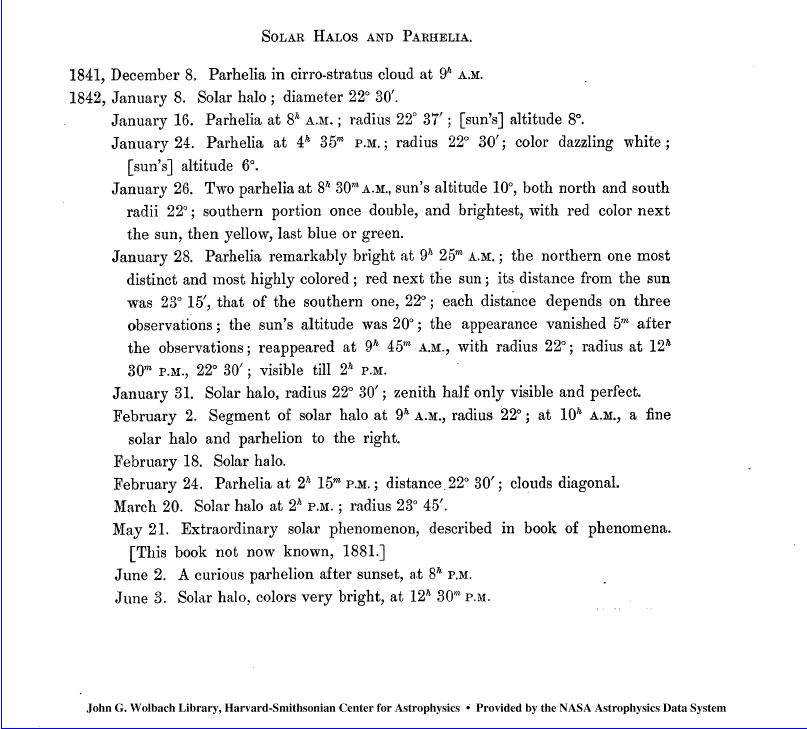 Is this the first photo of a halo (1902) that can be found? Sir Napier Shaw describes them as common with cirro- stratus. Chapter 12, copyright 1926.
http://www.survivorlibrary.com/libr...aWjEU86kkC3DuKC2AHRbIEuIznxgEN646QFvyNt5vrQQQ 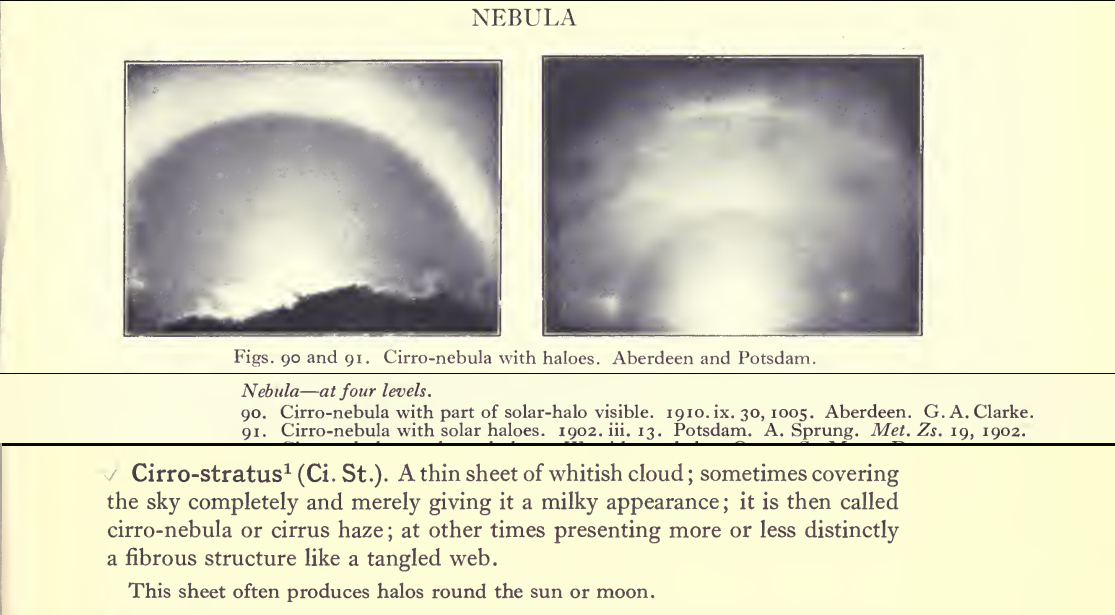