been [discussing] "chemtrails" which has now morphed into SRM. somehow this video proves something to them...not the million possibilities but it proves specifically srm.

Staff member
It's leaving aerodynamic contrails from the wing surface, as well as exhaust contrails from the engines. They occur is different (but overlapping) atmospheric conditions, so start and stop differently when moving through regions of uneven relative humidity.

Staff member
And the "four engines, two trails" is explainable by the fact that the exhaust contrails are not forming until some distance behind the plane, by which time the exhaust streams from the two engines on each side have presumably mingled?

Trailblazer said:
And the "four engines, two trails" is explainable by the fact that the exhaust contrails are not forming until some distance behind the plane, by which time the exhaust streams from the two engines on each side have presumably mingled?
Click to expand...

No, it is not the case here, as the two streams from the same side mingle together at much larger distance. I think that contrails from the outer engines just stopped a bit earlier than from the inner ones. And there was a huge gap between the trails and the engines, indicative of very low humidity in that particular parcel of air, which is the most likely reason of the contrails stopping. In contrast, before the plane had flown in that parcel, it was flying through a parcel of very humid air, probably supersaturated relative ace and nearly saturated relative water. The pressure drop on the wing pushed the air temperature below the dew point, causing the immediate condensation of excess vapour and therefore the formation of aerodynamic contrail, which naturally persisted in the ice-supersaturated parcel.

Trailblazer said:
And the "four engines, two trails" is explainable by the fact that the exhaust contrails are not forming until some distance behind the plane, by which time the exhaust streams from the two engines on each side have presumably mingled?
Click to expand...

Actually, I think it's just forming exhaust contrails from the inner engines at this point.

If so, then that's very interesting. The conditions are obviously very marginal, as the plane stopped making contrails entirely a few seconds later.

I suspect this is due to interactions with the wake vortices altering the mixing curve.

According to the Planefinder.net playback, it was a level flight at 30,000 ft: 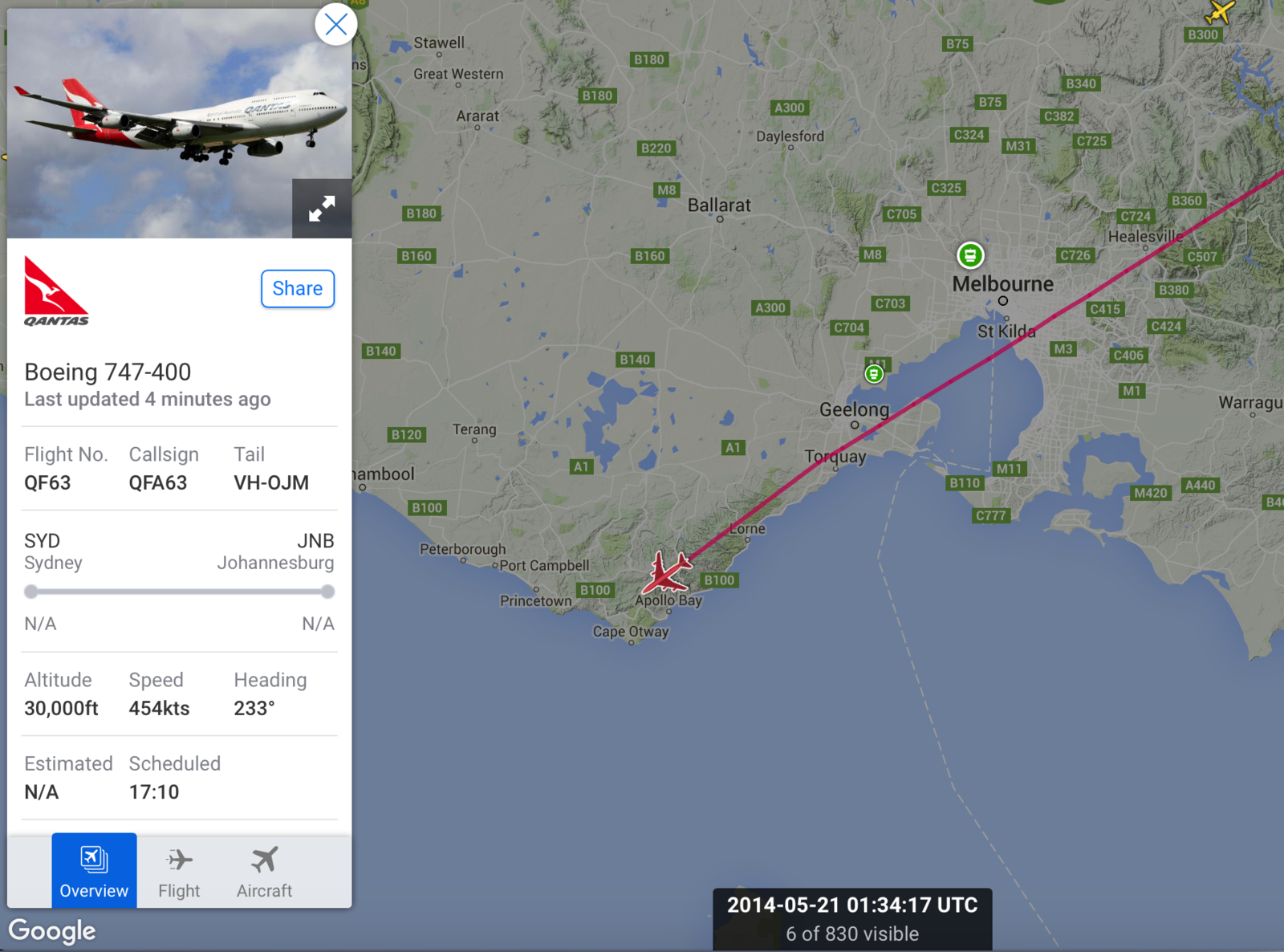 Here is the Terra satellite image taken one hour before QF63 flew over Geelong: 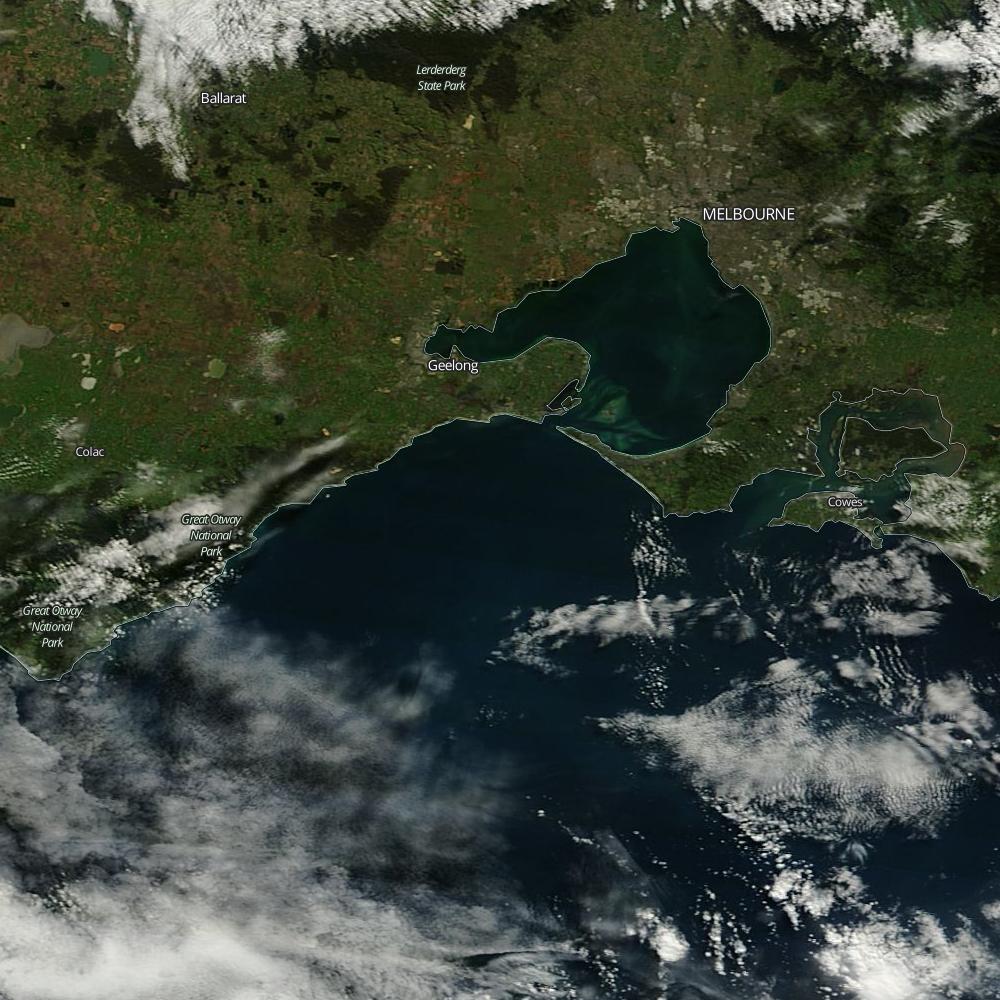 A patchy cirrus cloud southwest of Geelong possibly was the one, into which the plane had flown one hour later.
Last edited: May 6, 2016 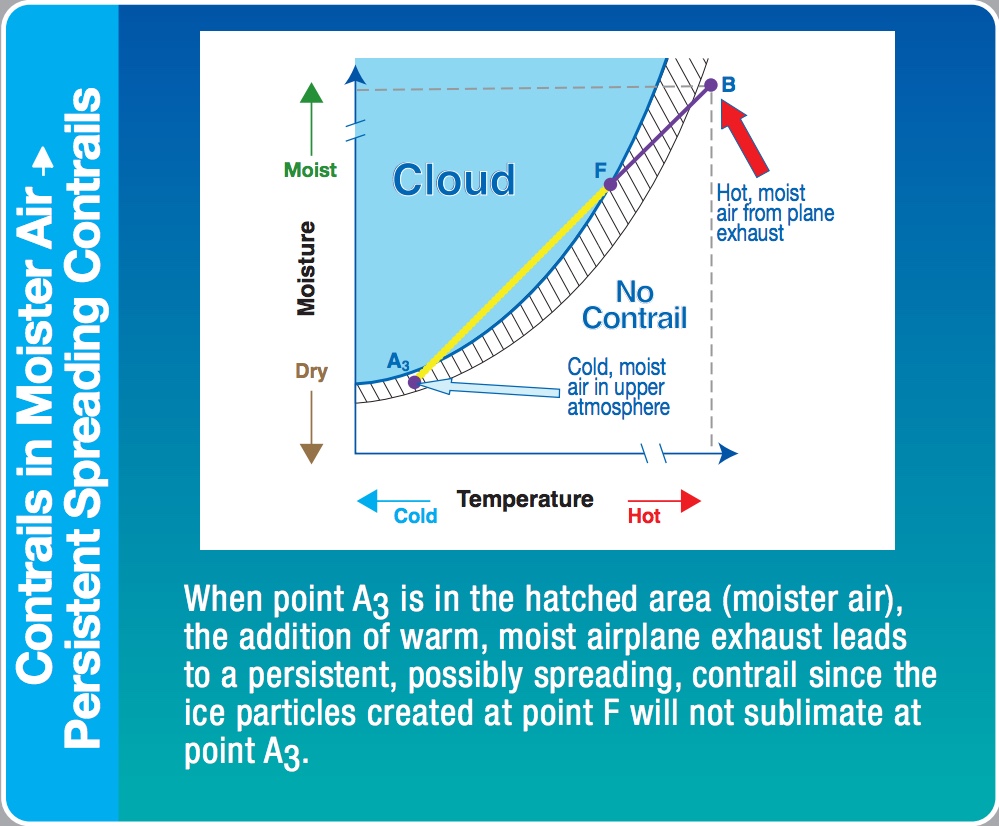 Models of contrail formation assume that the hot and humid exhaust air (point B) mixes linearly with ambient air (point A) until it reaches the same temperature and humidity.

During the mixing, it passes into the cloud formation stage (combined RHw > 100%), and thus forms a contrail.

So if two engines are producing different contrails in the same air conditions (a common point A) then either:
Explanation #1 could happen if different engines have different throttle settings.

Explanation #2a could happen due to the way the wake vortices affect the engines differently - with the outer engines being pulled up and over, this might result in different local pressure changes, and hence (?) a different mixing curve? This seems unlikely to me - can you even get non-linear mixing due to pressure changes?

An alternative explanation #2b is that the formation of the aerodynamic contrail partially desaturates the local air, this essentially creates an intermediate "ambient" air that has lower relative humidity (as the water vapor has partially condensed). So the mixing curve will initially head towards this intermediate point. This air itself is also mixing with the ambient air outside the aerodynamic contrail, and the combined effects of a mixing of three masses of air results in a non-linear mixing curve.

There could also be a combination of factors from #2a and #2b, as the wake vortex motion could affect the mixing speed between the exhaust gases, the aerodynamic contrail air, and the ambient air.
Last edited: May 6, 2016
You must log in or register to reply here.