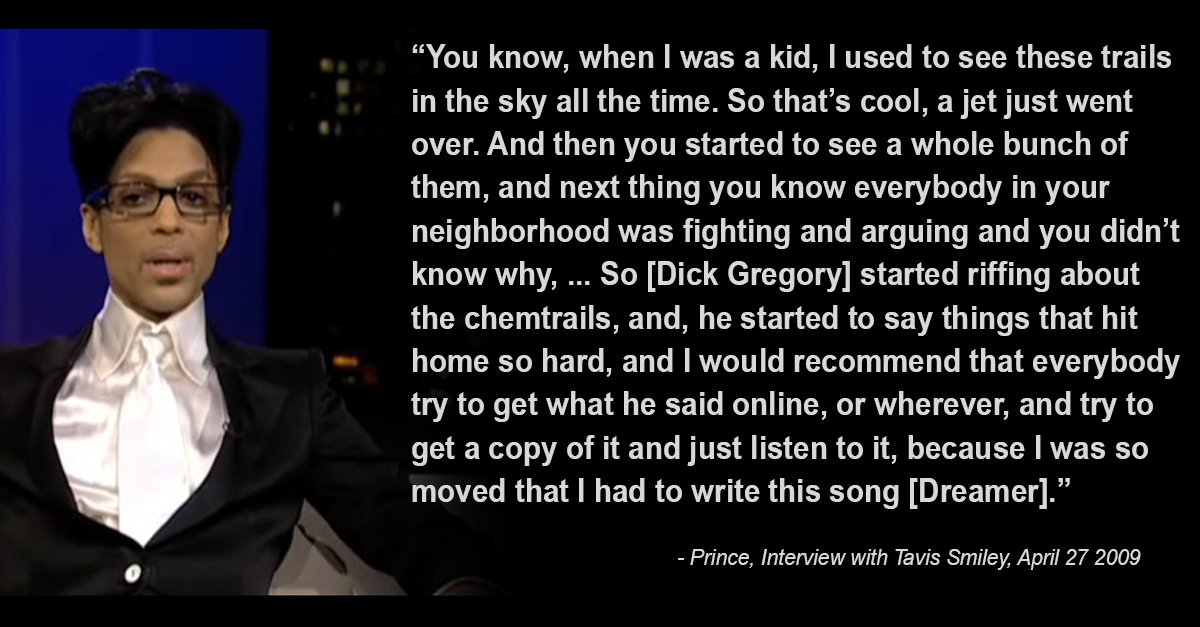 In 2009 Prince appeared on Tavis Smiley's PBS show for a wide ranging interview, and at one point he mentioned chemtrails (the conspiracy theory that claims the trails behind high-flying aircraft are not contrails, but some kind of deliberate spraying). When he died seven years later, new conspiracy theories started to form, suggesting he had been killed to keep him quiet about chemtrails, or that he had somehow died of "chemtrail flu". Sometimes both.

And so Prince became part of the chemtrail mythology, another piece of "evidence" that sounds superficially significant. But like most chemtrail evidence, it's based on a series of misunderstandings, and sometimes deliberate falsehoods, essentially a collection of myths.

Myth #1 - Prince started to talk about chemtrails, and then he was killed to shut him up.
Reality: He mentioned "chemtrails" once, and then he never mentioned them again. Not only that, he mentioned "chemtrails" once in 2009. Killing someone seven years after they stop talking about something seems like a bizarre way to shut them up. In fact Prince's death has resulted in vastly more discussion of Chemtrails than ever before. Way more than him talking about the theory ever did. 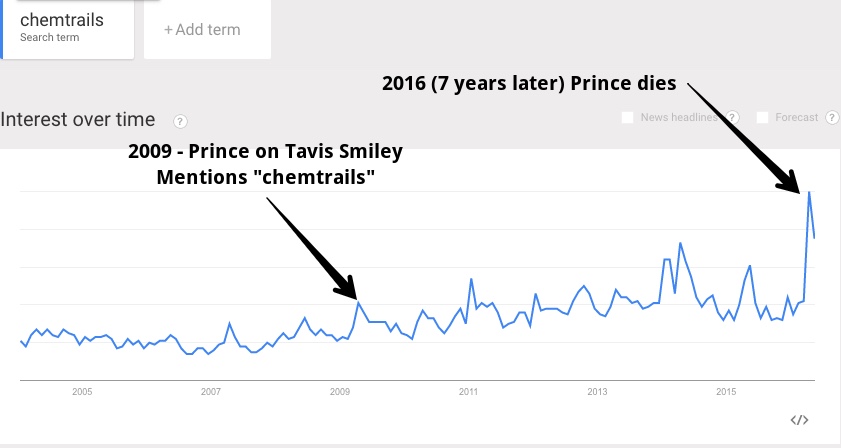 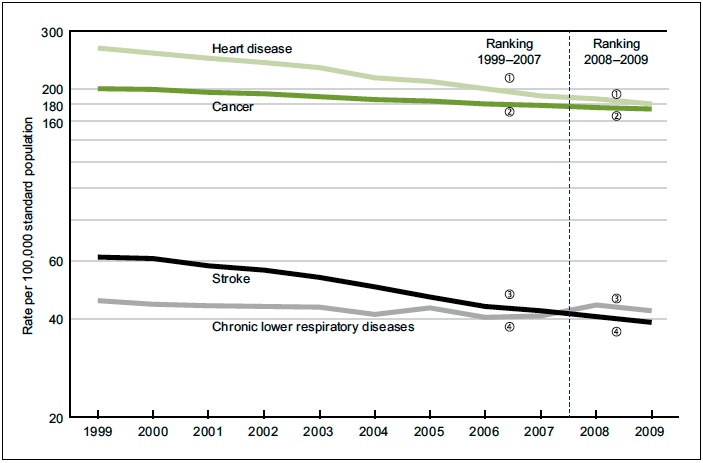 Myth #3 - Prince was talking about the common version of the Chemtrail Conspiracy Theory, where "chemtrails" are used to alter the climate in a form of secret geoengineering.
Reality: He was talking about a fringe version of the chemtrail theory, invented by Dick Gregory, where "chemtrails" are "Manganese" being sprayed to make black people fight each other to keep them subjugated.

The reality here is a little more complicated than the previous two myths, but it's worth understanding exactly what Prince was talking about. Not just because it has very little to do with the more common version of the chemtrail theory, but because it's a fascinating conspiracy theory on its own.

First let's hear exactly what he said, which was in response to a question from Tavis: "tell me about (the track) Dreamer", to which Prince responded.

When I saw The State of The Black Union, Dick Gregory really moved me, and a lot of my friends, I showed to to everybody [who] come over to the house, especially white folks, because they near to hear, that. You know? So they know more about all of us. Because what he said affects all of us. He said something that really hit home about this phenomenon of chemtrails.
You know, when I was a kid, I used to see these trails in the sky all the time. So that’s cool, a jet just went over. And then you started to see a whole bunch of them, and next thing you know everybody in your neighborhood was fighting and arguing and you didn’t know why, okay, and you really didn’t know why, I mean, everybody was fighting. So he started riffing about the chemtrails, and, he started to say things that hit home so hard, and I would recommend that everybody try to get what he said online, or wherever, and try to get a copy of it and just listen to it, because I was so moved that I had to write this song.

Dick Gregory is a civil rights activist, writer and comedian. He's also a conspiracy theorist, suggesting that the Moon landings were faked, and a variety of other conspiracies regarding 9/11, JFK, etc. In 2008 he was on a panel discussion at the State of the Black Union conference, where he said the following:


If I sit here today and these are all white folks, and they put some sleeping pill in my water, and I sit up here and doze off and go to sleep and everyone told it's the word, "niggers is lazy, they tired". No, that's because you too naive enough to know what they putting in my water. Okay? Your children ain't violent because they are black. They ain't violent. Most people in the world live in a ghetto, they don't kill people.

How much lead are you putting in my neighborhood? Lead affects my thinking capacity. Lead, there's only one think on the planet more dangerous than lead and that's manganese. Manganese will make you kill your momma. And let me tell you all something. If you want to see the largest homicide rate in the world it ain't in no black ghetto in America. It's a little town in Australia, where those white folks' homicide rate is two hundred times what their population is. And that town just happens to be located across the street from a manganese plant. How much manganese are you spraying in my neighborhood at night, while I'm sleeping.

Then compare this to the Lyrics to Dreamer, which is what Prince was talking about.

I was born, raised on a slave plantation
In the United States, of the red, white and blue
Never knew that I was different, till Dr. King was on a balcony
Lyin' in a bloody pool
I expected so much more from a loving
A loving, loving society
A truthful explanation, you know what
I got another, another conspiracy

If it was just a dream, listen, call me, call me a dreamer too

With more rewards and accolades, then anyone before or after
21st century, oh what a shame, what a shame
Race, race still matters
A race to what, and where we going
We in the same boat, but I'm the only one rowing

Last time I checked, you were sleeping, but you can call me a dreamer too
(What's up with this)

Peanut butter logic, served on a bed of lies
Don't go down too easy, when you've seen your father cry
Have you ever clutched the steering wheel in your car too tight
Praying that police sirens just pass you by that night
While the helicopter circles us, this theory's getting deep
Think they're spraying chemicals over the city
While we sleep

Come on, I'm staying awake
you can call me a dreamer too
(Ahhh, I got one eye open for these devils)

Notice the similarity in the two lines:


Gregory: "How much manganese are you spraying in my neighborhood at night, while I'm sleeping."
Prince: "Think they're spraying chemicals over the city / While we sleep"​
Notice also when Prince is discussing the song he says "you really didn’t know why, I mean, everybody was fighting", and Gregory similarly is questioning violence in black communities, saying "our children ain't violent because they are black." He then attributes it to adulterated malt liquor, lead in the water, and then manganese sprayed over the neighborhood at night.

So Prince seems to only have been talking about "chemtrails" in the context of this spraying of black neighborhoods for behavior control.

And in what might be considered a bit of a blow to the chemtrail theory, Prince says "when I was a kid, I used to see these trails in the sky all the time". Price was born in 1958, so he was a kid in the 1960s. So if you want to use Prince's account as supporting evidence for "chemtrails", they you have to also accept that planes left trails in the sky all the time in the 1960s.
Last edited: May 22, 2016

Gregory almost certainly got his manganese ideas from the work of Roger Masters at Dartmouth.

At any rate, for a year or two, Masters' manganese theory looked potentially groundbreaking, and got a lot
of attention...including, probably Gregory's. But it never really panned out and has been lost to history.

The main reason why I joined this forum, was and still is: What was the cause of death of Prince? Is there a Official autopsy report? And I do not understand why it seems that no one has an interest in knowing it .. Do anyone of you know it?

Star Wolf said:
The main reason why I joined this forum, was and still is: What was the cause of death of Prince? Is there a Official autopsy report? And I do not understand why it seems that no one has an interest in knowing it .. Do anyone of you know it?
Click to expand...

It can take a while, it will in the news when it is announced, because obviously lots of people are interested. Just wait.
http://www.cnn.com/2016/04/26/health/prince-death-autopsy-medical-examination/


In Prince's case, the medical examiner's office decided to run a full toxicology scan that could take weeks. Toxicology tests are typically what takes the longest to run in a death investigation.

"It is a very detailed process that cannot often be done in a few hours or a few days or even a few weeks. More involved investigations can take several months," said Bruce Goldberger, a professor and director of toxicology at the University of Florida College of Medicine. "By now, the medical examiner probably knows or has a pretty good handle on the cause and manner of Prince's death, but you have to do all these other tests that are a part of an investigation to officially certify the cause and manner of death."

Thanks Mick.. Can't wait to see it.. I got a lot to tell about it.. But must return another time, got to go now..
But i'm happy to join you here... ~SW~
You must log in or register to reply here.