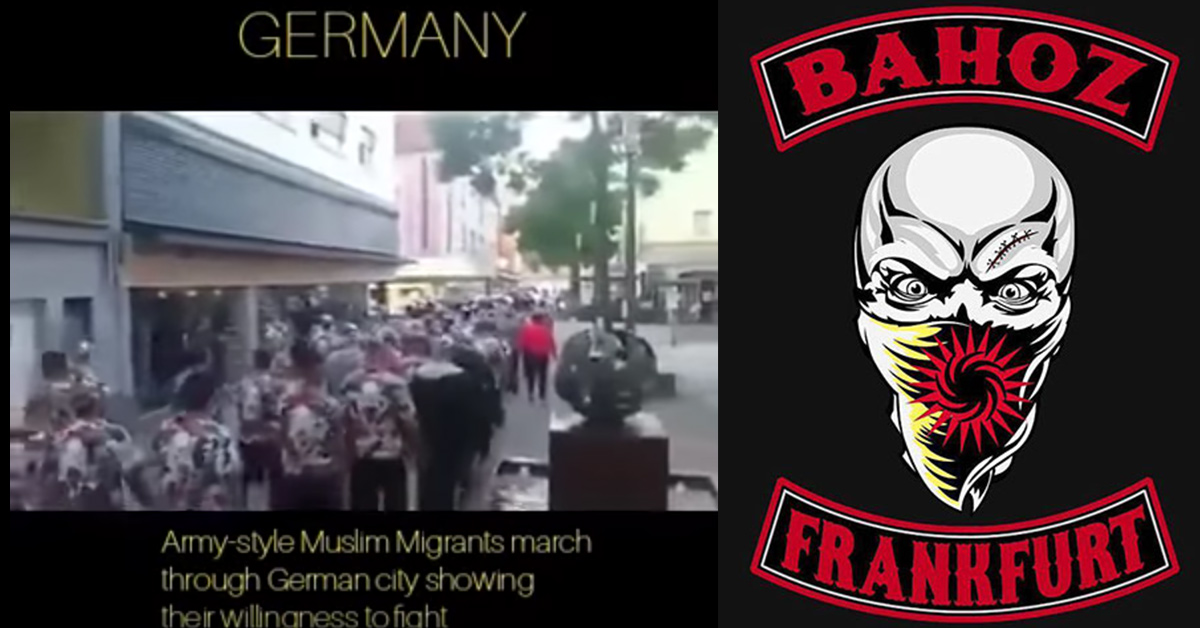 Several variants of a blurry video have been shared on social media. They show a group of men in camouflage patterned t-shirts walking down a pedestrian street. One such video is described as:

Hundreds of Muslims, all dressed close to army attire, marched through Berlin - showing they are huge in numbers and ready to fight.

If this isn't a declaration of war, I don't know what is!!

Content from external source
In fact the video is not in Berlin, it's in the town of Hanau near Frankfurt (they are marching past the WMF store on Rosenstraße). The men marching are members of Bahoz, which is a Kurdish "rocker" gang (the equivalent of a US biker gang, like the Hells Angels). They were marching as part of show of strength, however it was just against another local gang, Osmanen Germania (Ottoman Germany). Neither group promotes any kind of muslim ideology. 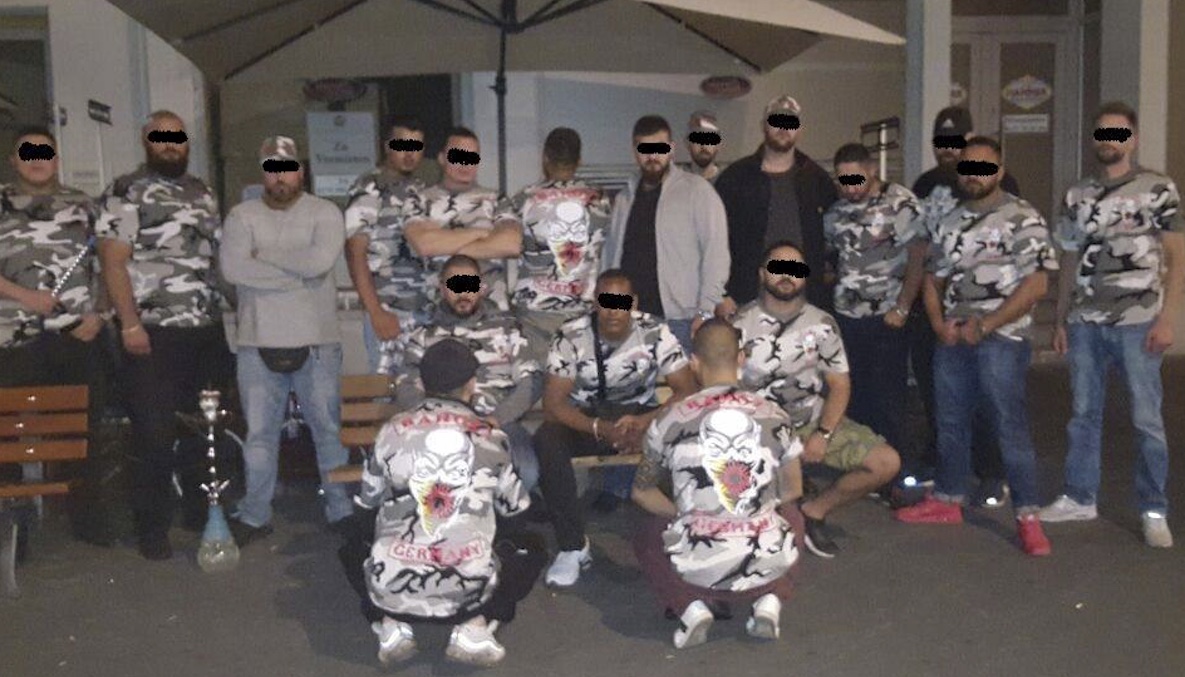 [Google translation]
Bahoz
Here also the specialists of the police are at the very beginning. Bahoz could be rooted in the Red Legion, a street which was close to the Kurdish workers' party PKK. It operated mainly in Baden-Wuerttemberg and was banned in 2013. In self-understanding, the Bahoz members call themselves independent, anti-racist and anti-fascist. The group also operates in Switzerland.


What is the particular danger?

So far, there are only threatening gestures that the two groups have exchanged. Probably because the police have interposed. However, the turmoil in Turkey, where President Recep Tayyip Erdogan is pushing a Kurdish anti-Kurdish policy, could also cross the German gangs through the gangs.

Hey, I know this street. It's indeed Hanau and those are indeed members of the Bahoz, you can even see their logo. Interesting that people forge these clips when in the close-by town of Frankfurt, actual Muslim gangs such as "Die wahre Religion" used to roam the streets (they were raided a few weeks ago). Furthermore, right-wing blogs such as PI-News are criticizing the two involved gangs (comprising of migrants, as the caption says) even without the Islam angle.

In case anyone is wondering: This is the exact location this clip was filmed. Quite far from Berlin actually.
Last edited: Nov 30, 2016

It appears that what is bunk is the location, as well as the phrase "declaration of war." What is not bunk is that there are two ethnic rival gangs of muslim refugees who are at least potentially threatening to continue fighting the Turkish/Kurd civil war on German soil. Conflicts over territory are often couched in religious terms, so I don't think one could categorically rule out this being a religious conflict.

Steve Funk said:
I don't think one could categorically rule out this being a religious conflict.
Click to expand...

Is the Turkish/Kurdish conflict a religious conflict?

No - it is ethnic - founded in Turkey's long desire that everyone in turkey be Turkish and thus having an inbuilt antagonism to anyone who isn't Turkish and refuses to assimilate - Turkish Nationalism.

Oddly enough the Kurds and others are resistant to this, and want their own state....go figure.....
You must log in or register to reply here.

Debunked: Video of ghost running through football stadium in Bolivia