The claim: The Berlin Declaration was a document "to gain a public license to begin experimental deployment of Geo-Engineering techniques".

Max Bliss has claimed the following:


Max was part of a small group of activists that asked sufficient pertinent questions to raise enough dissent at the Berlin Climate Engineering Conference 2014, that the so called Berlin Declaration, which was a document to gain a public license to begin experimental deployment of climate engineering technologies was scrapped.

Here is the Declaration: 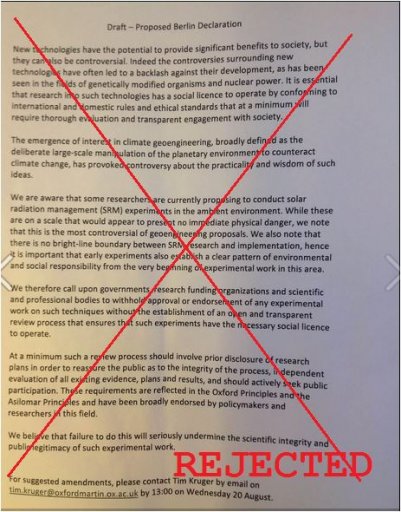 Max has explained why this Document supposedly had to be defeated thus:

The fourth paragraph of the Declaration reads thus:


We therefore call upon all governments, research funding organizations and scientific and professional bodies to withhold approval or endorsement of any experimental work on such techniques without the establishment of an open and transparent review process, that ensures that such experiments have the necessary social licence to operate.

Max appears not to have read the declaration correctly and has confused the term "social license to operate" with some sort of official license to "chemtrail."

What is a “Social License to Operate”? The World Bank suggests that a social license to operate is the acquiring of “free, prior and informed consent of local communities and stakeholders”. (my emphasis)

A "Social license to operate" is a term that began in the Australian Mining industry and refers to the fact that a legal licence is no longer the only requirement for an enterprise like a mine to operate; and they must qualify for such a "social licence".

This Declaration, if accepted, would have given chemtrail activists precisely what they claim they want;
The ability to withhold experimentation on Geo-engineering through lack of informed consent.

The following Google search link is peppered with angry references by Max Bliss denouncing this same "lack of consent".

Max Bliss is now going to another conference on the back of this "success". His attendance at the last meeting had absolutely no positives for the chemtrail movement, in fact it had quite the opposite.
You must log in or register to reply here.