Here's the original. They had reversed the image, and added a very poor saucer

Damn, this is one I REALLY wanted to be true!

Don von Hostas said:
Damn, this is one I REALLY wanted to be true!
Click to expand...

yes and some posters in the vid comments also follow that thinking, believing this to be genuine.

It was hardly worthy a post but i was so surprised of vid comments claiming this as real i saw it necessary.
I had 1st thought to post in debunk humor thread crafting my post with words less complementary of the vids editing skills but had left that aside. The phenomenon of poorly faked UFO is far less intriguing than the mind set of those who just, just want to believe,,,, perhaps a thread but i don't have the expertise in the psychology of delusional thinking.

derwoodii said:
Need to show this was faked and where the original was taken from

Just from my own experience.. it looks like a demolition explosion. You can see (around the 21 second mark) the explosion going up and out, and it LOOKS like something flying up through the smoke and then igniting.. very similar to what you see when the hot water heater goes up on Mythbusters:


Just on a much bigger scale.

It also seems to ignite in the air much like the coffee creamer did:


What I DONT see, is anything that resembles anything like an airstrike. There's nothing impacting and then causing the explosion, so from that Id be pretty confident in surmising (especially given the grainy quality of the footage) that its faked.. if Im wrong and it IS an airstrike type attack, then itd be from something like an Apache or Super Cobra or along those lines. I'll keep digging and see if I can find the original footage. The fact there's not a lot of chatter in the footage is odd, because you USUALLy hear servicemen hootin' and hollerin' when shit goes boom.

Staff member
It's a JDAM strike. The actual bomb is small and very fast and was just missed in the low quality video. Compare with 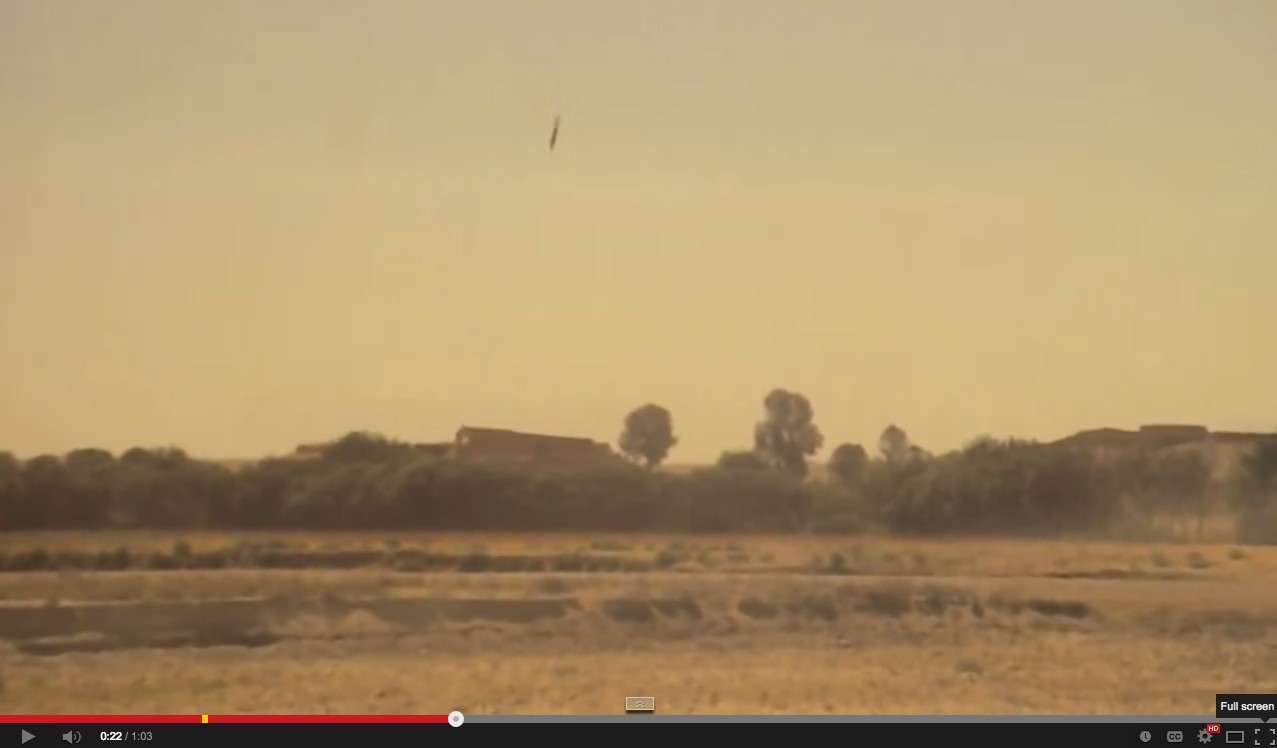 ^Yes agree & in the OEM vid there is a bit of chatter after the strike am happy not so much whoopin n hollorin as under that hit i'd say many innocent souls perished.


If anyone cares to know what they're really seeing here: This is a JDAM (Joint Direct Attack Munition) strike. Based on the radial fragmentation, I'd say that these are MK84 warheads. Each one detonates at a specific altitude and angle to achieve a specific purpose. The first impact :)40) is a groundblast, intended to cause shockwave and structural damage. The second :)42) is an airburst, which throws fragmentation over a wider area (note the concentricity of those "dust puffs"). The third impact @ :46 is NOT a secondary detonation; it's another (penetrator) JDAM with a delayed fuse to take out subterranean facilities and/or tunnels. Note how the blast is directed almost straight up, as opposed to the lateral blast effects you'd see with secondary detonations.

Mick West said:
It's a JDAM strike. The actual bomb is small and very fast and was just missed in the low quality video. Compare with

Im glad you found it, because thats exactly what I was waiting to see.. there's usually a streak or a blur that drops and snaps through the frame and I never saw it. Thanks Mick.
You must log in or register to reply here.