The viral video of lights seeming to carve holes out of clouds is a fake video and was originally debunked by @ufoofinterest tweet
Source: https://twitter.com/ufoofinterest/status/903675752780107776 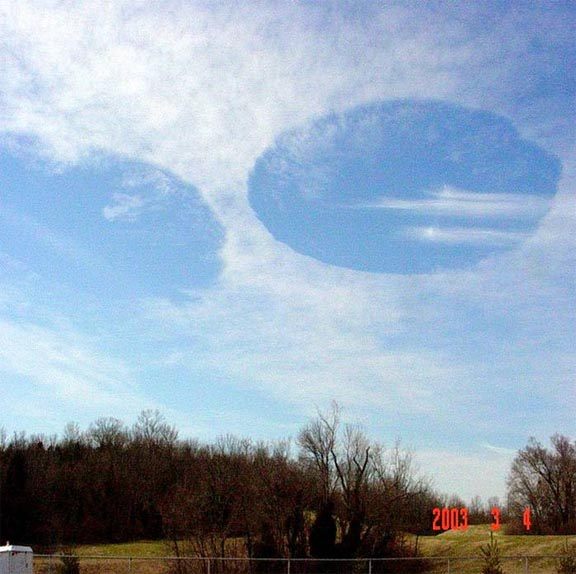 This photo was taken from my backyard between 10:00AM and 10:15AM 3/4/2003 with a Kodak
Digital Camera. The circles appear to be in the direction of Nashville TN which is about 32 miles
south west of my home in Gallatin, TN.

I sent them to a local televison station meteorologist. He said he had 2 theories. He said it could have
been what the weather people call a thermal inversion, Which means warm air rising in a circular
motion much like a tornado only in reverse.

He also said the AMS (American Meteorological Society) mentioned in the AMS report, there are
experiments with rain prevention being used by the U S Air Force that have been known to cause
this. He featured it on last night's weather report on the local Fox News channel.

The image has been expanded by flipping and copying and pasting sections, blending them in, and removing the date stamp. 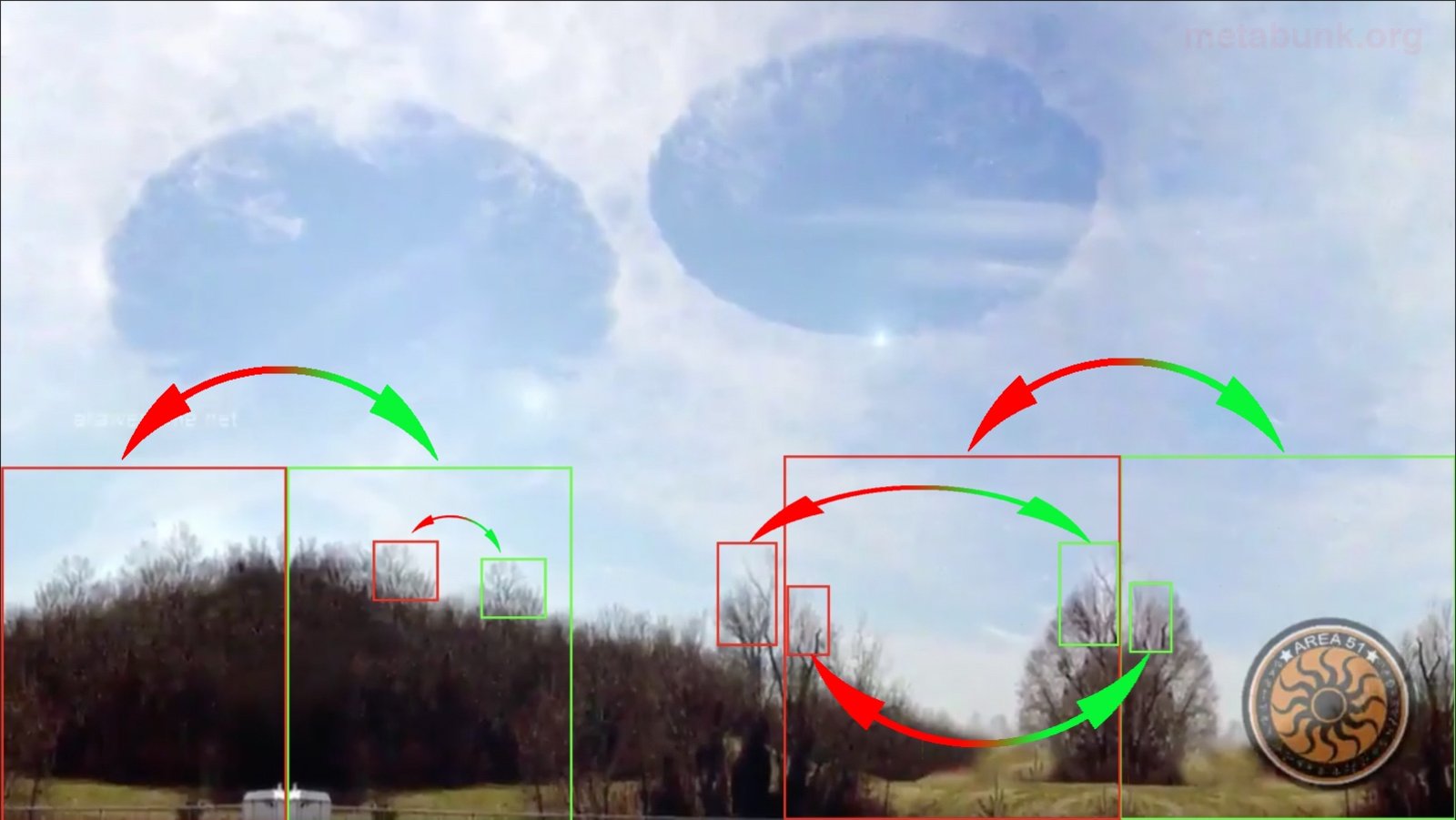 Here's a close-up of the mirrored region in the lower left. 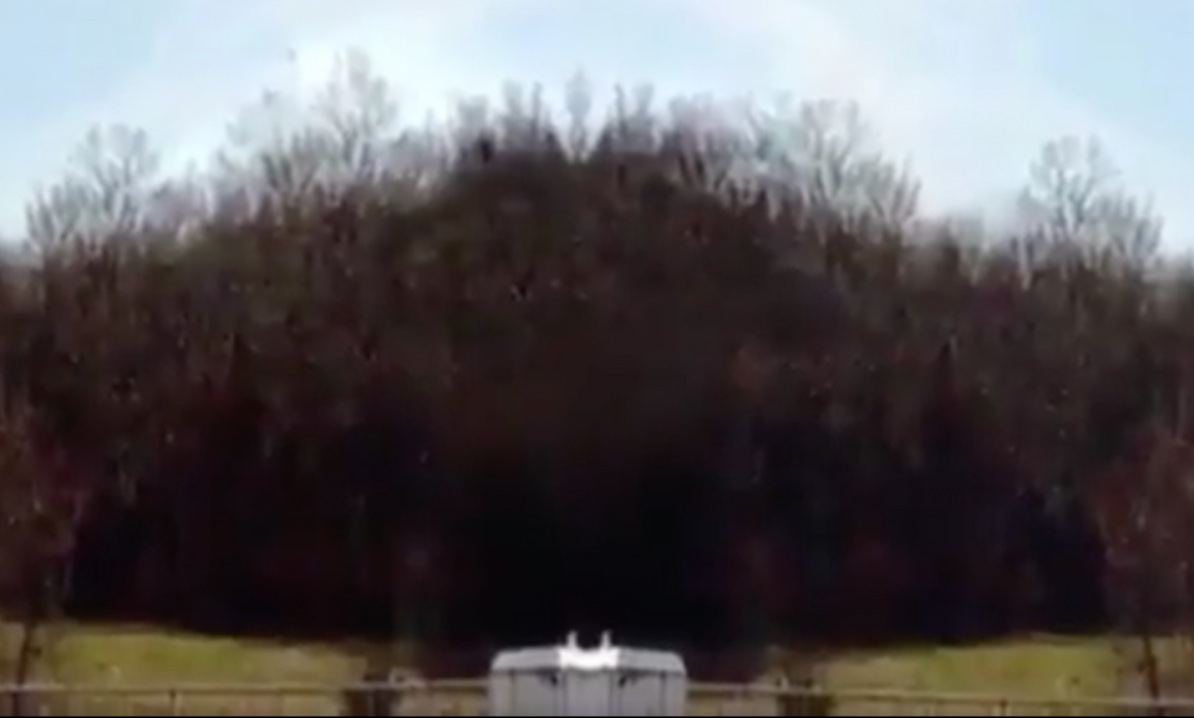 The text says "allawesome.net" so it appears this may be the original video uploader. AllAwesome is Area51, known hoaxers - note the similar logos 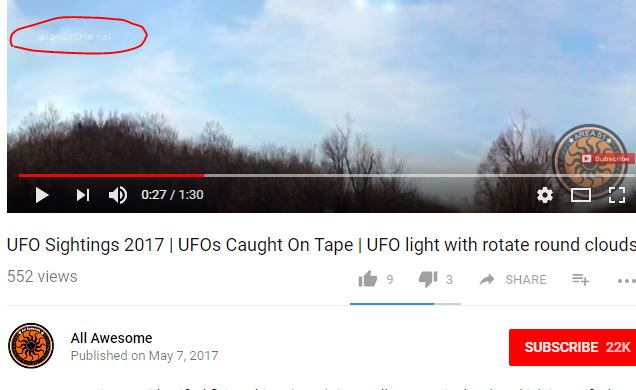 This top post has been edited as a summary of the thread below, so the following may have some repetition
Last edited by a moderator: Sep 3, 2018
C

Does anyone have any idea what is happening here? This was posted to a respected astro imaging forum. 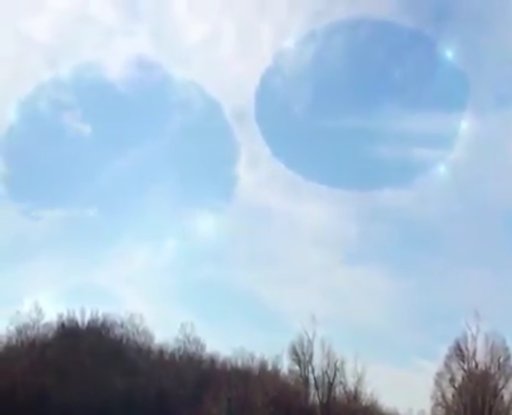 Thanks for sharing, I confirm it was just a fake.
A

There is one more video of the same place and event....Only one circular shape is scanned from another place, but on the left is a piece of the second circle on which the lights are rotating. Horizon and tree crowns match both the original photo and the first video.

Both videos (Youtube 6/9/17 and 25/5/18) could not be created from the original photo of 3/4/2003 because they are taken from a different location and angle than the photo itself.

It's not clear it's Fake. It is necessary to perform a data analysis of the original video that is available here and to exclude or confirm the animation action and to sync the time and action of both videos.

Antonín Kratochvíl said:
Both videos (Youtube 6/9/17 and 25/5/18) could not be created from the original photo of 3/4/2003 because they are taken from a different location and angle than the photo itself.
Click to expand...

It's not a different location or angle. It looks like the same photo to me, just cropped and stretched a bit. The video has had a bit added on to the right, by repeating the tree from further left and cloning in some extra sky.

If you just stretch the video vertically slightly, it exactly matches the photograph. The "camera motion" is just a video effect: nothing on the picture itself is moving, apart from the light that has been added in. 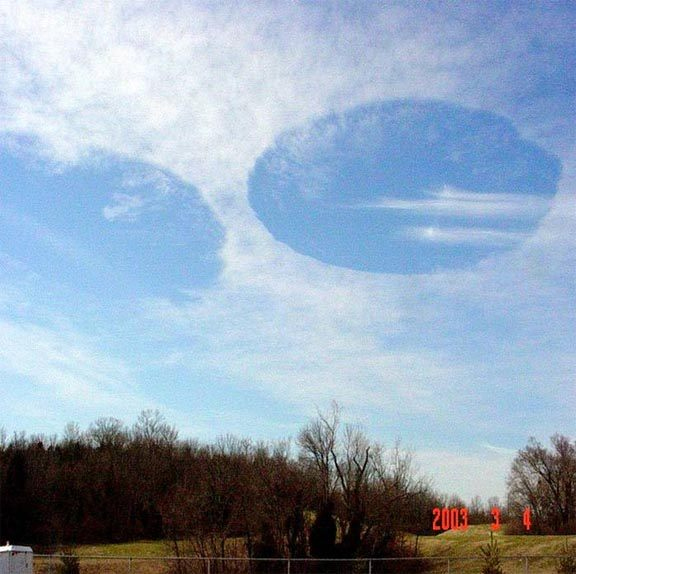 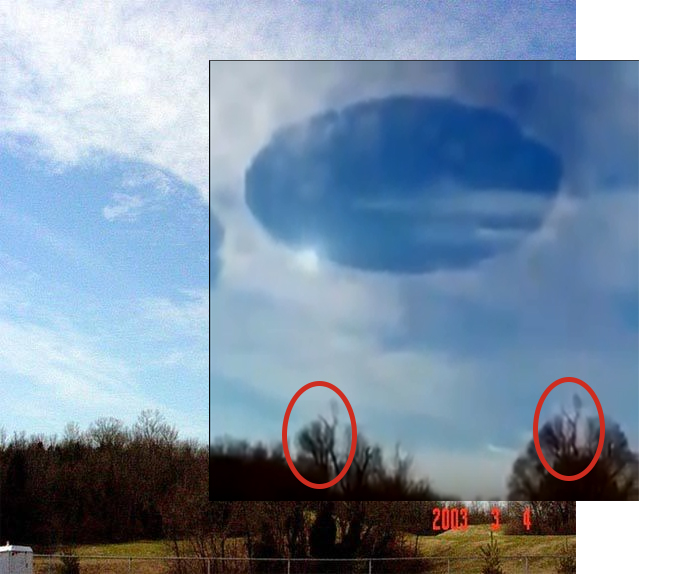 The same "extra tree" is there on the earlier video - in fact this second video appears to be nothing more than a lower-resolution crop from the first one. Notice that the "zoom-in" effect appears at exactly the same time, as the light reaches the 10 o'clock position on the hole.
Last edited: May 31, 2018

Trailblazer said:
The video has had a bit added on to the right, by repeating the tree from further left.
Click to expand...

Right. Also, there were no doubts it was just a fake. In this image you can see the green sections used to be edited and flipped horizontally (the red sections).

ufoofinterest said:
Right. Also, there were no doubts it was just a fake. In this image you can see the green sections used to be edited and flipped horizontally (the red sections).
Source: https://imgur.com/Z6mE228
Click to expand...

Yes, also the left-hand hole itself (of which only half appears in the original photo) has been mirrored and copied to create an entire circle.

Trailblazer said:
the left-hand hole itself (of which only half appears in the original photo) has been mirrored and copied to create an entire circle.
Click to expand...

Edit: on Twitter I exposed their several fake videos before "All Awesome" blocked me.
Last edited: May 31, 2018
A

nor is a video created by this photo by mistake, the angle of rotation of the circular structures in the clouds is different for both the photograph and two videos where the same story is recorded. In two videos, a synchronous movement of lights is recorded

Antonín Kratochvíl said:
nor is a video created by this photo by mistake, the angle of rotation of the circular structures in the clouds is different for both the photograph and two videos where the same story is recorded. In two videos, a synchronous movement of lights is recorded
Click to expand...

The videos are both created from that one photo. I haven't done a rigorous comparison of the two videos side by side, but as far as I can see the later video that you posted is just a crop from the first video.

See the comparisons above: there is no different viewpoint or different angle, it is just an image made from that photograph by adding bits to either side, which is then manipulated using video editing to appear like a moving image, with circular lights added. The actual clouds and trees don't move, and there is no parallax movement in the trees. You can overlay the images yourself to demonstrate that.

Here is an animated GIF showing:

1) The original photo overlaid on a still from the video

3) The lines of symmetry making it obvious where elements have been flipped and copied to extend the image. Also note the blurring in the oval (and its reflection) where the date on the original photo has been cloned out.

Both videos show the same characteristics, because one is simply a cropped copy of the other.
Last edited: May 31, 2018

Antonín Kratochvíl said:
Videos and photos show the same space, horizon, tree crown from another angle, and the location of two camcorders and a camera. The angle of inclination of the two circular structures relative to the camera is quite different. The photo shows circular two structures and a screenshot from the video as well as a smative whole video showing two ovals!
Click to expand...

Where are you getting the idea that there are two different viewpoints? The position of the trees and the fallstreak holes matches exactly. The video is simply an animation created from a still image, which is a manipulated version of the original still.

If there was more than one viewpoint then you would see differences in angle (parallax) between the trees in the foreground and the clouds in the background. They wouldn't align when you overlay them. The fact that the mirrored portions on the "video" image coincide with the edges of the original photo, so that the areas outside the original image have been reconstructed artificially, is also a dead giveaway. 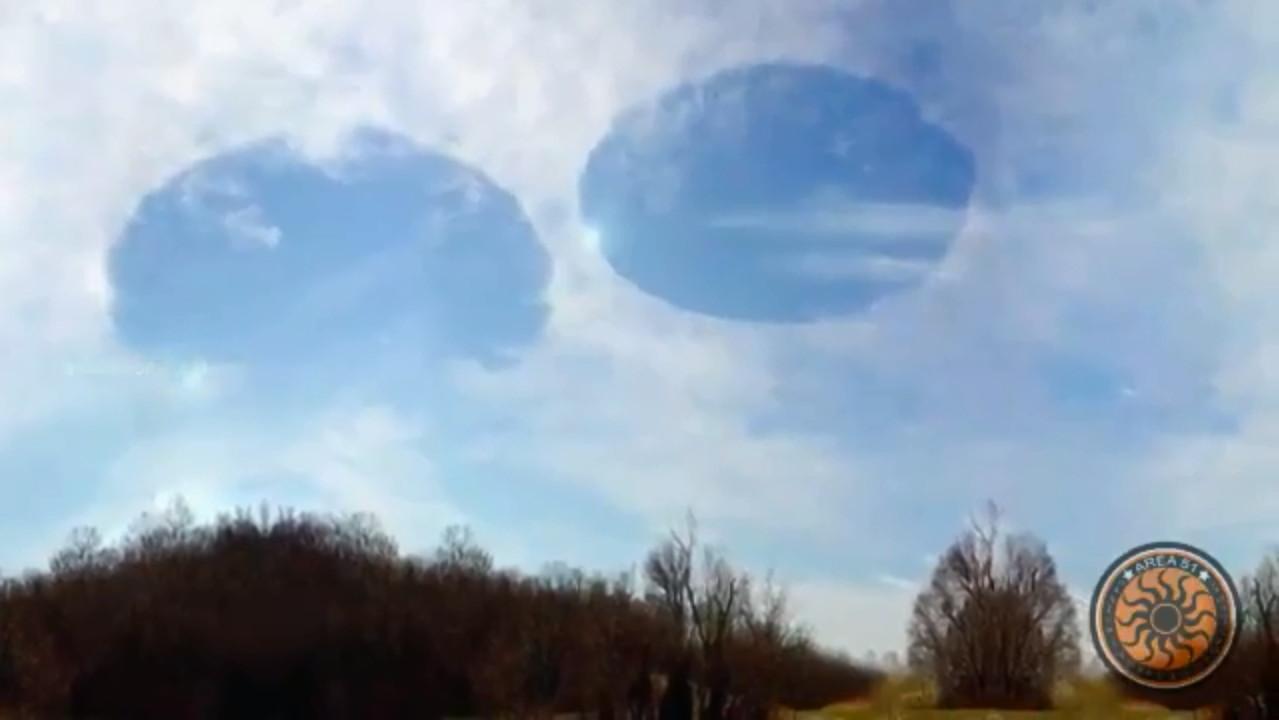 As the overlay above shows, they match exactly. The faked one has just been stretched a little in the vertical direction.
Last edited: May 31, 2018
A

Staff member
@Antonín Kratochvíl, it seems like you might have skipped over some of the earlier posts. It's irrefutable that the video is created from the single photo. It contains regions of the photo that are duplicated, some of which are flipped, and some of which have been edited and blended. That is literally impossible in any context other than image editing. Please review the thread in full before posting again.

All those images are the same, simply stretched in the vertical direction to different degrees (and with faked bits at left and right). There is no other viewpoint. You seem to be confusing the different shape of the holes with a different viewpoint, but it is just a vertical stretch - notice how the shape of the trees also becomes taller and skinnier from the left photo to the right photo there.

Staff member
The more obvious flipping can be see at 0:09 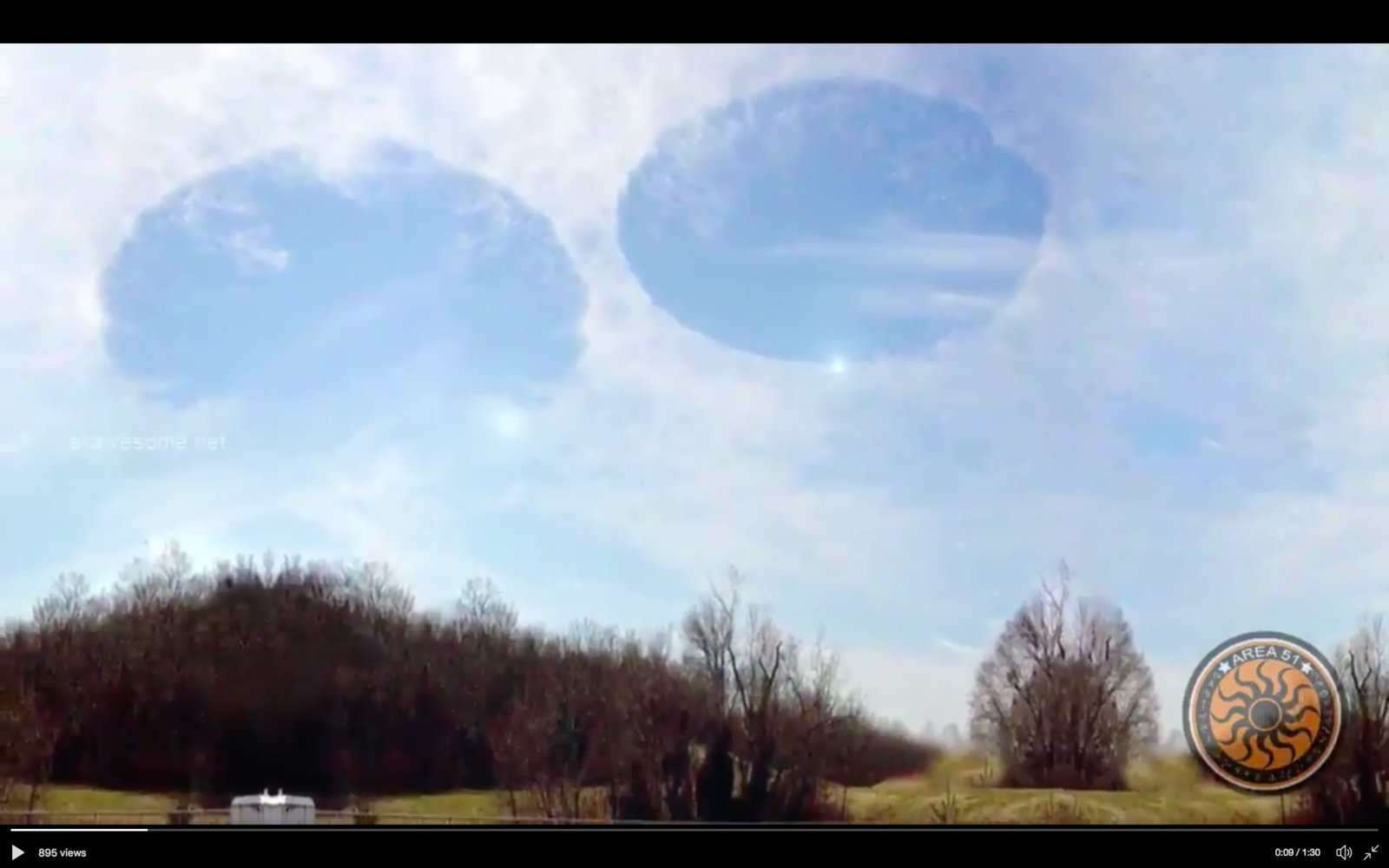 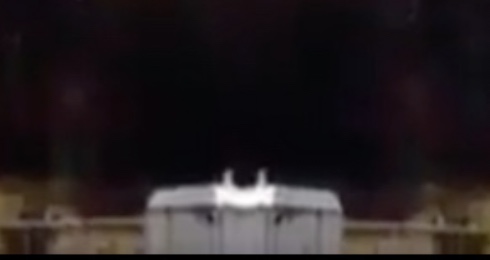 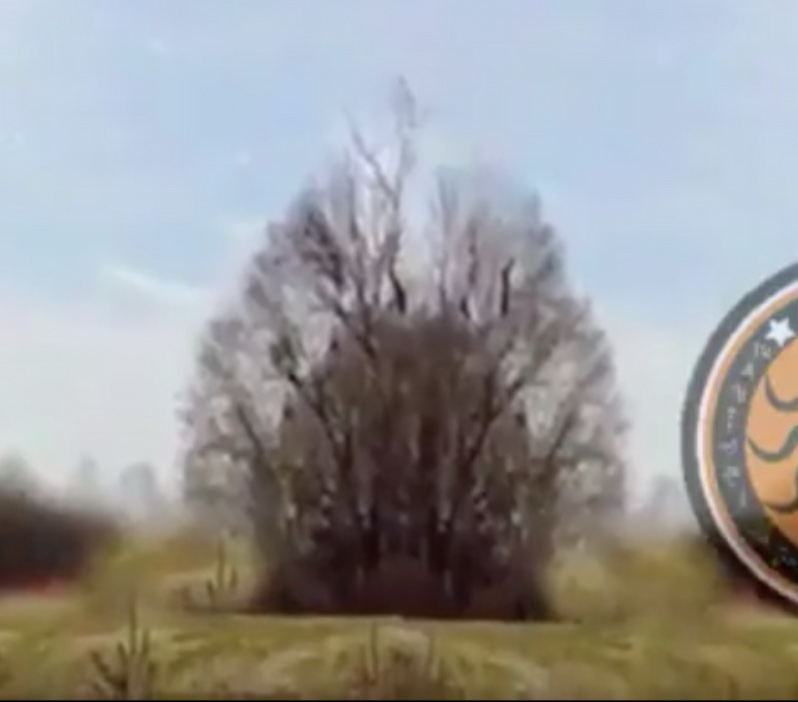 Staff member
Obviously the image has not JUST been flipped. It has been flipped and edited. Someone spent at least an hour of work on making this video. I've added this comparison to the OP

(after @ufoofinterest's post above, adding some copy-and-paste)
Last edited: May 31, 2018

Mick West said:
Obviously the image has not JUST been flipped. It has been flipped and edited. Someone spent at least an hour of work on making this video. I've added this comparison to the OP

As part of a PM discussion with a member who was sceptical that the image was created from that original, I demonstrated in real time how easy it would be. This recreation took less than half an hour, including taking all the screenshots as I went:


Trailblazer said:
I am now going to do this in real time. I will show you screenshots.


Increase canvas size at both sides:

Clone a bit of tree at right-hand side:

Select rectangle at right and flip and copy:

Clone to hide some of the symmetry and the orange date stamp.

Clone out clouds and repeated trees at bottom right

Now the left-hand side. The faker has modified the treeline a bit to make more of a "peak".... so let's clone it:

Then select and flip:

Now just the left circle to do.

And a bit of cloning to hide the joins. And voila....

Finished result. This took me less than half an hour, including taking screenshots and doing a running commentary by PM, and I'm certainly no Photoshop expert!

Comparison to the picture used to make the fake videos. Pretty similar. The idea wasn't to reproduce it exactly but just to show how easily an amateur can do this stuff. The hoaxer just included a bit more extra space at the left and right and cropped some off the bottom, which I could easily have done too.

Trailblazer said:
he hoaxer just included a bit more extra space at the left and right and cropped some off the bottom
Click to expand...

Very minor point, but they did not crop off the bottom. The image used in the video is a bit bigger than what you see in any one frame. The use simulated camera motion which means they have to zoom in a bit so the camera can move a bit.
You must log in or register to reply here.