Contrails versus humidity: a timelapse project

I'm planning to continue this for at least a month, which should be a big enough data set to draw some reasonable conclusions.

I don't have the equipment (or the time!) to record my own timelapses, so, with permission, I am using videos recorded by an amateur weather observer in Irlam, near Manchester in northwest England. Obviously I don't have any control over whether these videos will be available every day, but hopefully they will be.

This is the location in the UK, and his camera faces northwest: 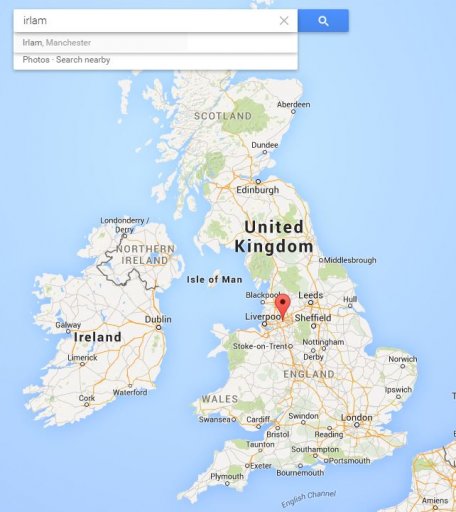 To record the relative humidity, I am using the 300mb maps at instantweathermaps.com (a pressure of 300mb equates to an altitude of approximately 30,000 feet). These are based on weather model data, so they are a forecast, but are in near real time, in three-hour steps through the day.

Important caveat: the maps only show the forecast humidity at that particular altitude. Planes don't all fly at 30,000ft, so the humidity at different flight levels can be very different. Nevertheless I am hoping a good correlation can be seen.

I will start the observations in a new post, and hopefully edit this one with a summary at the end of the month.
Last edited: May 6, 2015

Staff member
I was planning to start with May 1, but the conditions on April 30 provided a nice contrast to May 1, so I will start there. Here is the timelapse video:


A mixed day, with plenty of cloud and the odd shower, but the sky in between the clouds is deep blue with virtually no visible contrails.

Around 19:40 (1:54 in the video) there appears to be a fairly persistent contrail in the distance towards the right of the screen.

At about 20:25 (2:00 in the video) there is what may be an old contrail appearing over the horizon and moving towards the camera.

Relative humidity through the day (NB the time on the charts is UTC, so add one hour to get British Summer Time)

RH starts off very low and increases in the afternoon. A narrow band of humid air crosses the Manchester area around 1800Z (7pm), and humidity is still moderately high by 2100Z (10pm), with a drier band following behind.
Last edited: May 14, 2015

Staff member
And here is May 1:


Lots of very persistent spreading contrails in the morning, hidden at times by more general cirrus.

Contrails continue through the afternoon, hidden by more general cloud cover but still obvious at eg 16:00 (1:24 in video).

No visible contrails and clearing sky by about 20:00.

Staff member
There is also an overnight timelapse for the night of April 30/May 1, which shows the abrupt change in conditions:


The night starts out very clear, with several planes passing by on the east-west transatlantic flight path but not leaving any trails.

Then almost on the stroke of midnight (0:20 in the video), aged contrails and cirrus approach from the southwest.

Several more old contrails cross the sky, although the plane that passes overhead about 02:10 (0:36 in the video) doesn't leave a trail.

At 03:00 (0:43 in the video) there's a very long and prominent trail, with a shadow, although the plane isn't visible. Again, a plane flies over at 03:13 without leaving a trail, suggesting that conditions directly overhead may be less favourable for trail formation, but trails are forming further west and drifting into view, blending with more general cirrus into the early morning.

Then at 00Z, 1am, a band of dry air is directly over Manchester, with very humid air just to the southwest. This fits with the observation that planes overhead are not creating trails, but older trails are moving in from the southwest. 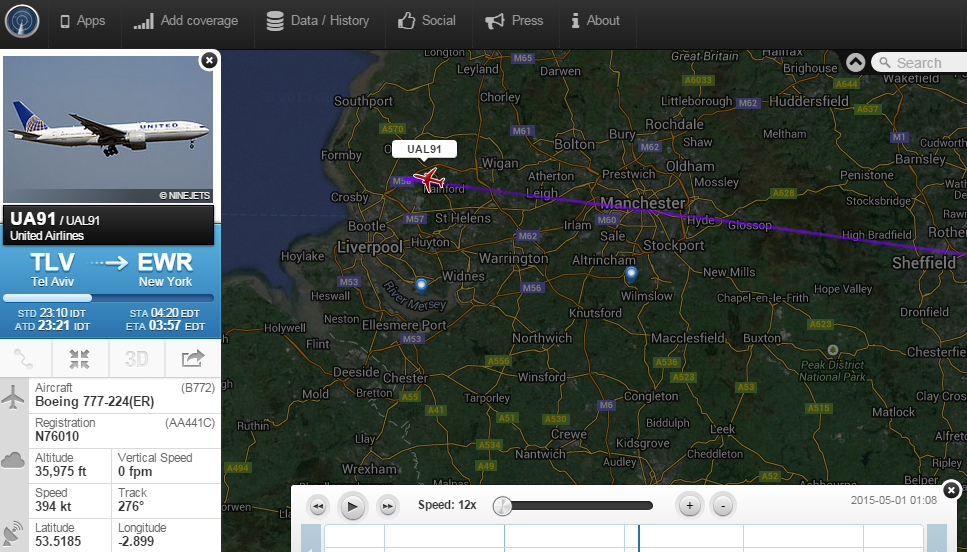 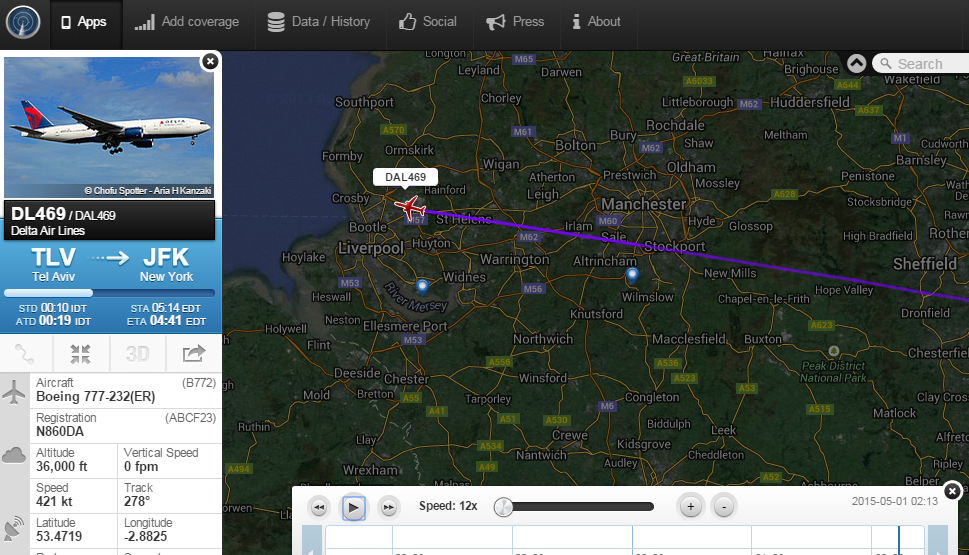 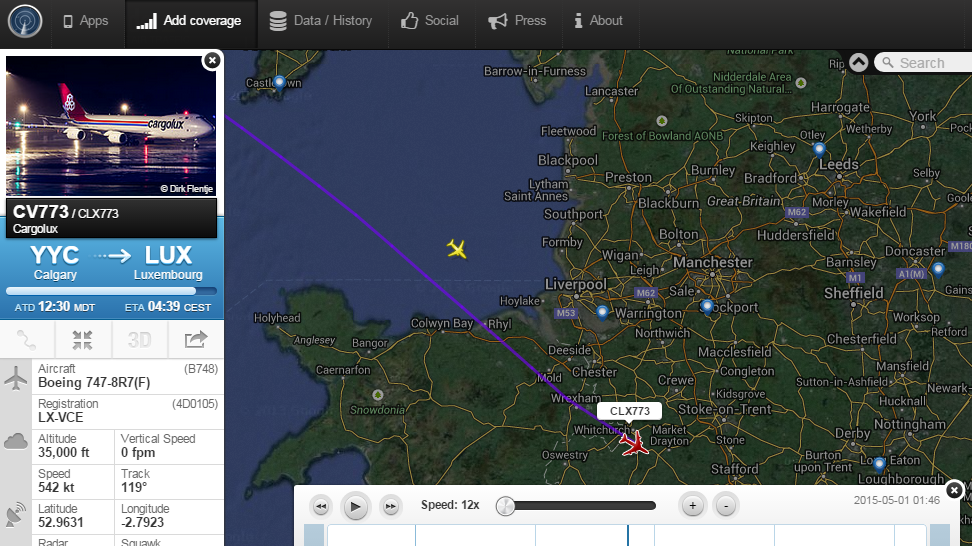 although this Titan flight followed a similar, but lower, path a few minutes later: 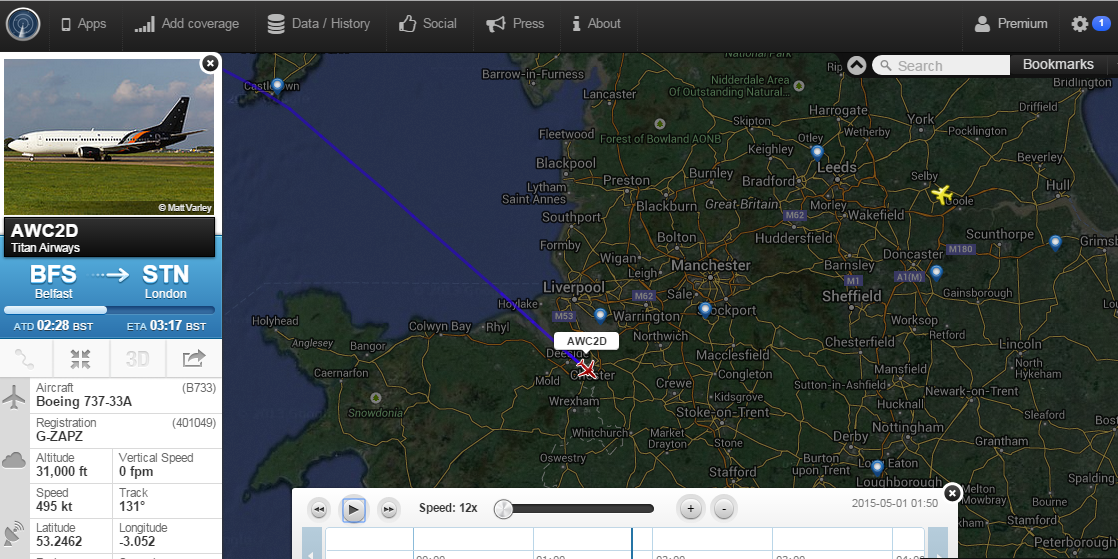 Staff member
May 2. Not much to see here, totally overcast, but included for the sake of completeness:

I am very pleased to see this. While it is by no means complete, (as you say, you are only looking at relative humidity at one height), This is EXACTLY the sort of thing that proponents of Chemtrails SHOULD be doing.
Stop relying on "a feeling" that things didn't used to be like this or that you claim the whole sky is filled etc,
get out there and collect some actual data.
This is always the same location and the same height and spread over a lot of days so it is a proper scientific experiment.

More people should do this in more locations.


An overcast start, with the cloud starting to break from about 12:30 (11:30Z). Plenty of cumulus cloud through the afternoon, and into the evening, but deep blue sky in between, with no visible contrails right through to the end of the day.

Staff member
May 4. A good example, this one:

More overcast into the evening with a bit of a clearance towards sunset, but contrails still visible (eg at 20:30).

The plane leaving the trail at the left of the screen at 15:21 is this Ryanair flight: 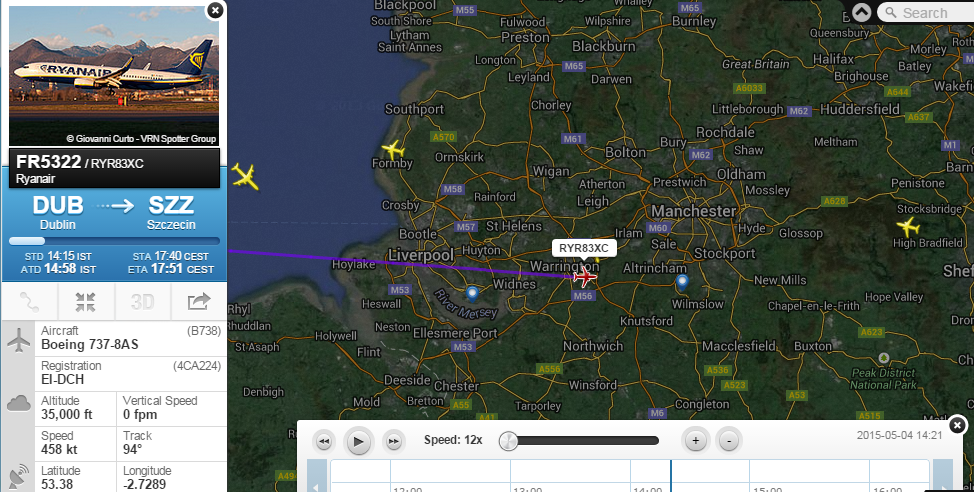 The trail then blows to the north and is crossed by a trail which appears to be another Ryanair flight:

The time-lapse vids perfectly illustrate that winds can blow in different directions according to altitude. Another point that gets missed or deliberately ignored by chemtrail promoters.

Trailblazer said:
May 4. A good example, this one:

More overcast into the evening with a bit of a clearance towards sunset, but contrails still visible (eg at 20:30).

The plane leaving the trail at the left of the screen at 15:21 is this Ryanair flight:


The trail then blows to the north and is crossed by a trail which appears to be another Ryanair flight:

The view from Northumberland on the 4th 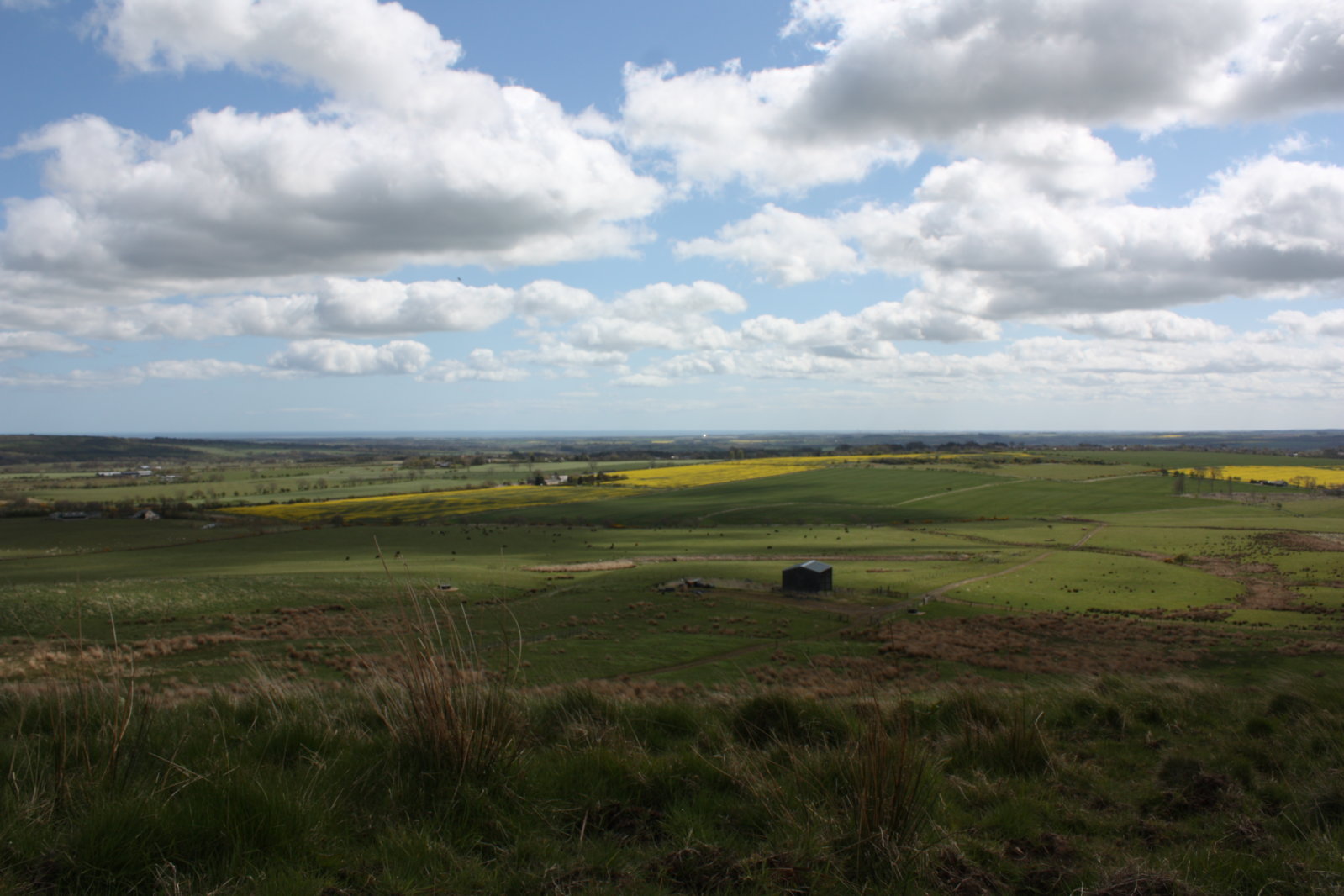 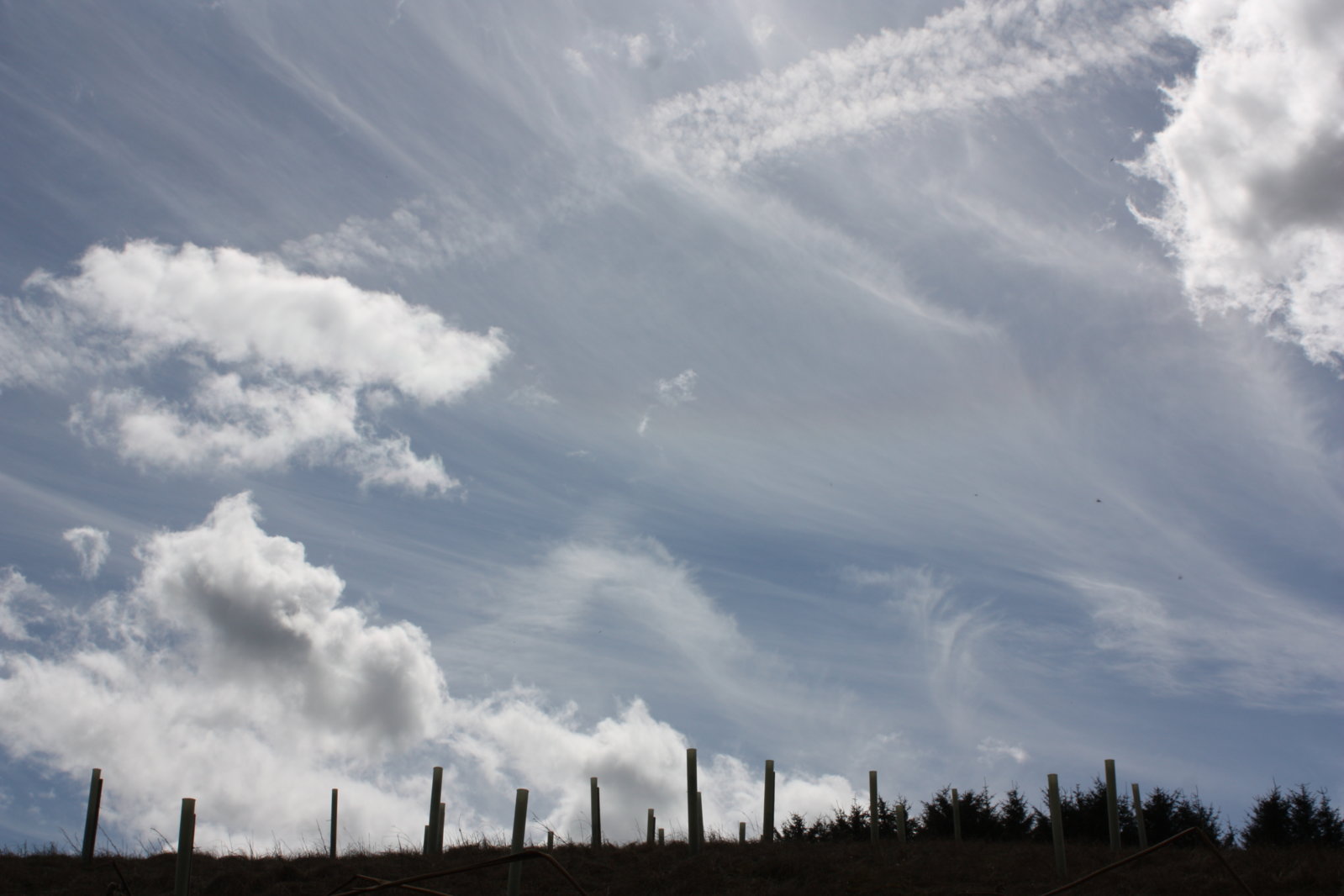 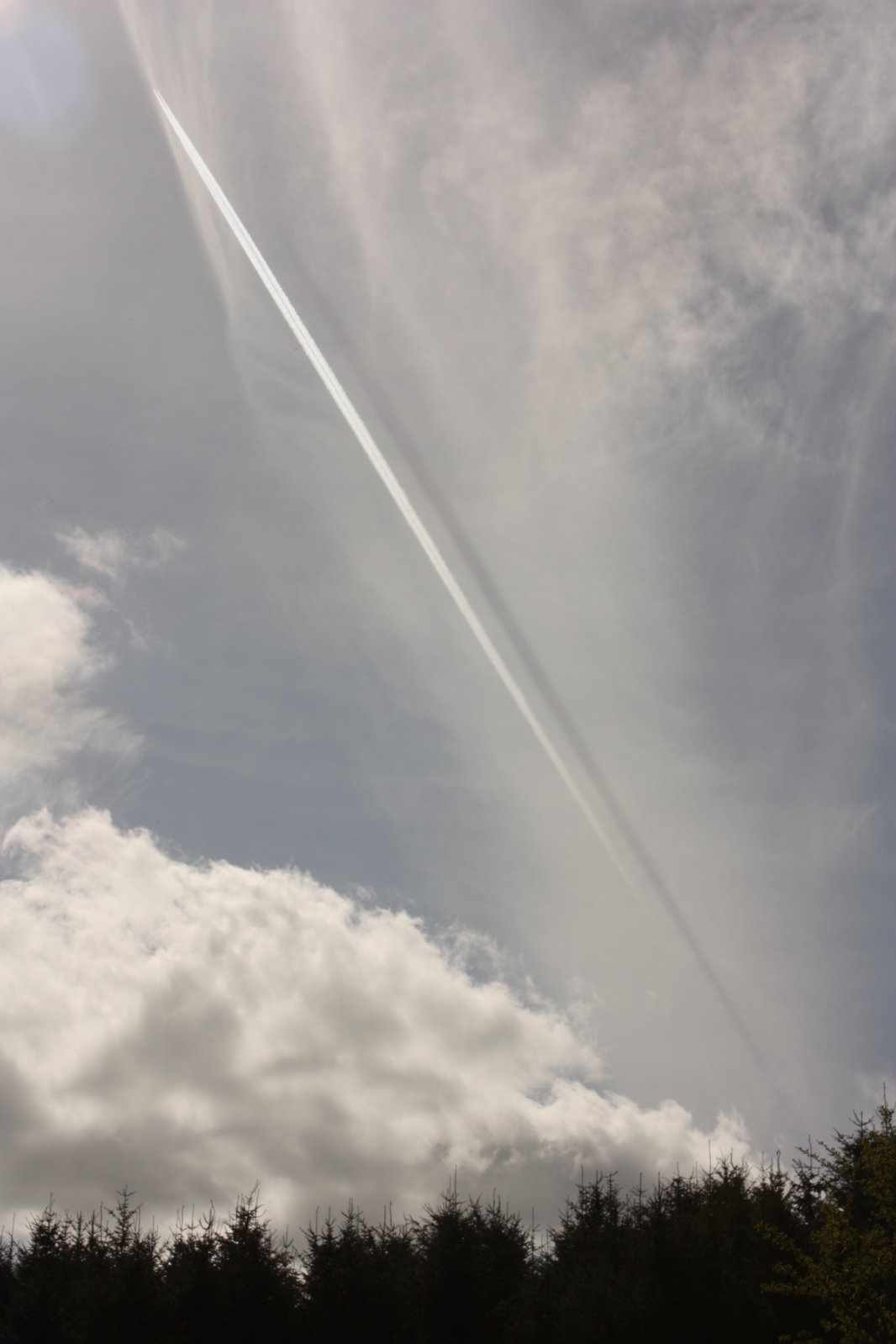 cloudspotter said:
The view from Northumberland on the 4th

Nice pics. Again that fits perfectly with the humidity charts.

Any more updates on the project @Trailblazer ?

cloudspotter said:
Any more updates on the project @Trailblazer ?
Click to expand...

I have the charts and videos ready to post. Got a bit of real work to do outside while the sun is shining, but will update later today.

Shame I didn't do it in April: there's quite a lot of cloud this month.

Variable amounts of shower clouds in the afternoon with deep blue clear sky in between. No contrails.

Staff member
May 6. This thread probably isn't doing much for the Manchester tourist board!


Quite clear early morning with no contrails, then rapidly clouding up and full overcast by 07:30 (06:00)

Very dry air in the morning, more humid air arriving in the late afternoon, peaking with a fairly narrow band of >90% RH air around 18:00Z (19:00BST). This fits pretty well with the time of the only contrail observed. 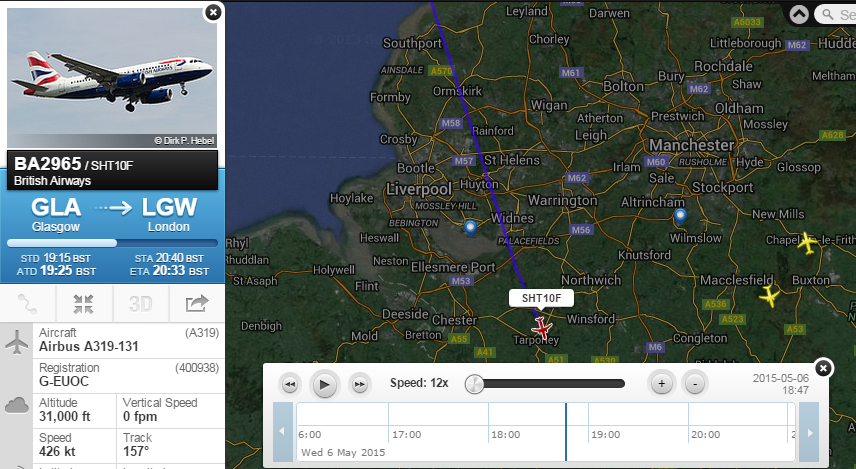 
Mostly cloudy morning; no contrails seen in the gaps in the morning.

Several very persistent contrails including one prominent curved trail entering from the left of the screen about 15:20 (14:20Z, 1:45 in video).

As the sun begins to set, from around 19:35Z (1:52 in video), the contrails produce a sundog to the right of the sun as they drift across. 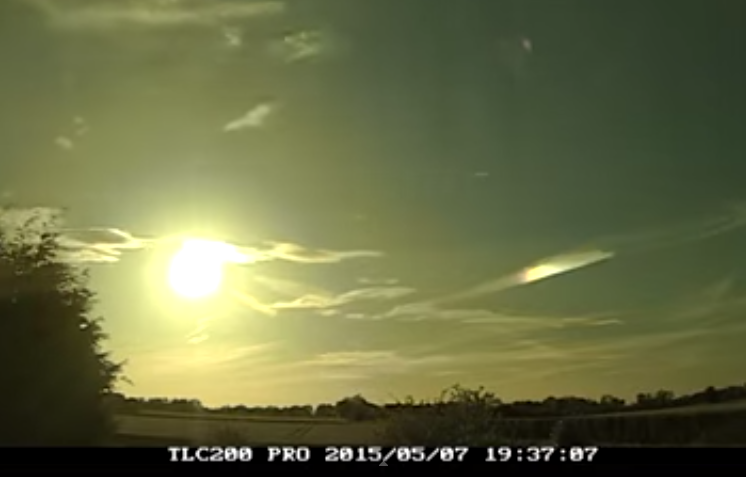 Fairly dry air in the morning, RH up to about 80% by 12:00Z (13:00 BST). RH remains high, around 90%, but a thin band of slightly drier air is present in the Manchester area for much of the evening. This may account for the clearer skies seen directly overhead, while contrails were blowing in from further west.

The curving trail at about 15:20 (14:20Z) is probably this Aer Lingus flight, which made a turn just before it crossed the coast. The curved portion of the trail then drifted towards the camera position: 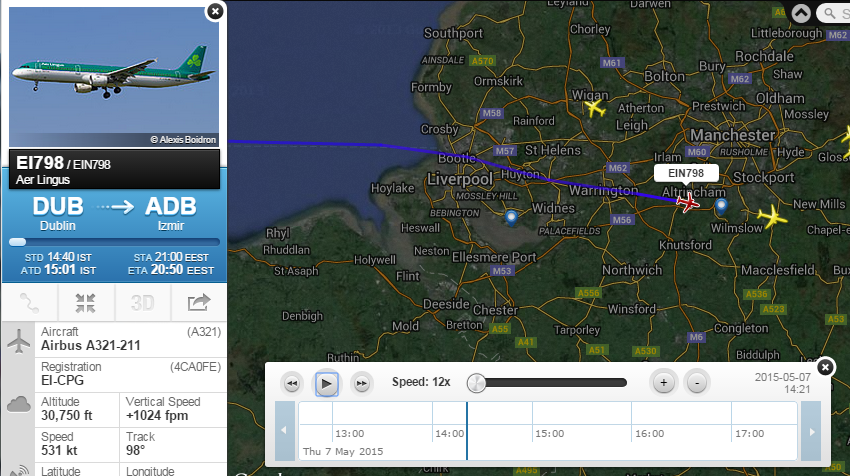 This may be the one leaving a non-persistent contrail at 18:54: 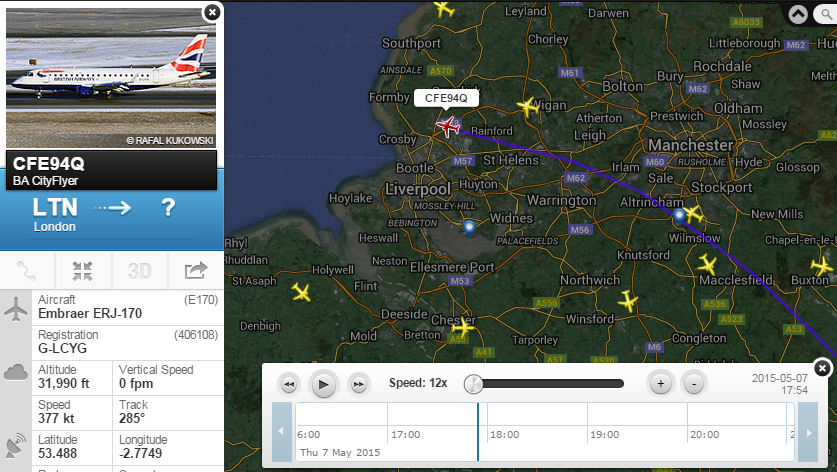 Staff member
Just a note to say that when time permits I am planning to count the visible contrails in each three-hour period and plot them against the average humidity for that period. Obviously this will only be possible for periods when the sky is mostly free of low cloud.

Continuing for now with posting the videos and charts for May 8:

Then complete overcast by about 12:30 (11:30Z) leading to a wet afternoon with no more of the sky visible.

Staff member
A few days to catch up on now...

Sudden clearance around 17:00 (16:00Z) with a spell of clear blue skies and few to no contrails: a plane passes over just before 18:00 leaving only a short broken trail: 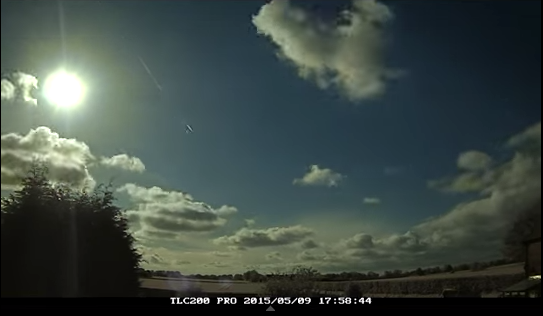 Then from about 19:00 more contrails are visible although they seem to be drifting into view from over the horizon rather than forming overhead.

Then a very overcast period.

Low cloud clearing from about 17:00 to reveal more hazy cirrus with a "milky" sun and lots of contrails casting shadows on the cloud layer.


Cloudy morning, clearance about 10:00 (09:00Z) to blue sky with several linear cloud features which don't look like contrails. Then a steady increase in cirrus cover, with the first prominent contrail just before 13:00 (12:00Z, 0:56 in video), with plenty of persistent contrails and altocumulus in the afternoon, leading to another "milky" sky with very prominent contrails and shadows in the evening.

The lone contrail at 12:51 (11:51Z) is interesting, as it is the only one visible, and the RH maps above suggest conditions were unfavourable at 30,000ft. Based on the direction (almost straight towards the northwest facing camera) position where it appears, to the left (south) edge of the field of view, I think it is this plane: 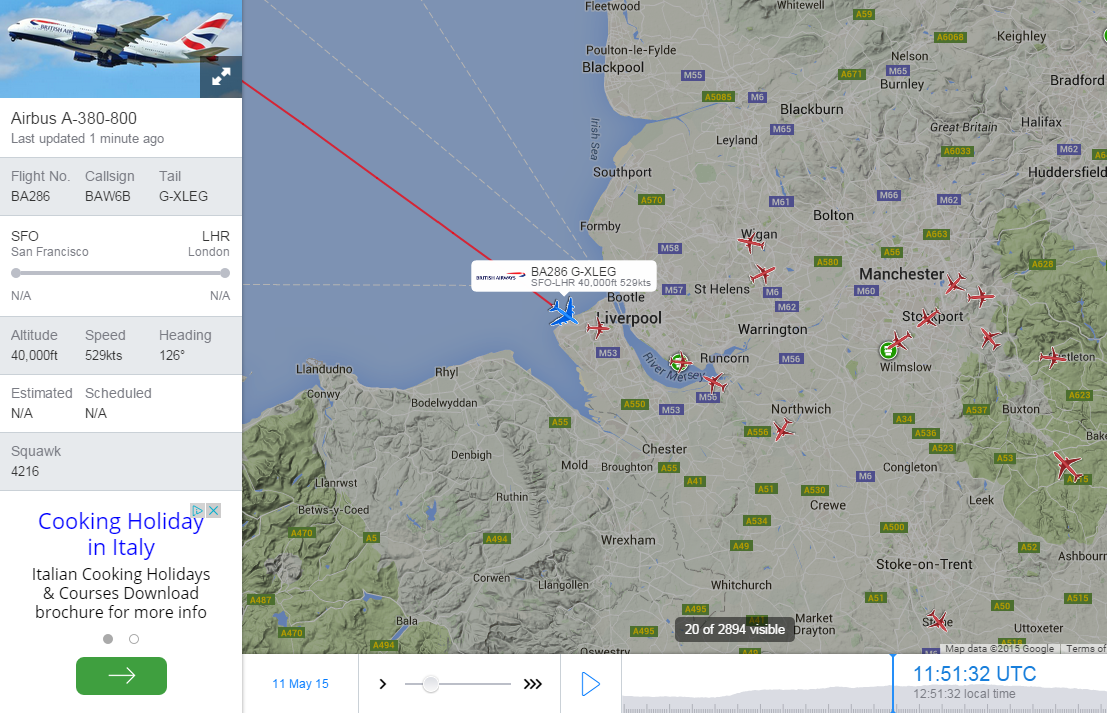 
A cloudy morning giving way to blue skies with fair-weather cumulus. Cloudier from about 14:30 to 17:00 (13:30 - 16:00Z) but not a persistent contrail to be seen all day. Two or three planes leaving short trails are seen late in the evening.

Easy to see why it was a contrail-free day. RH below 20% for most of the day, with an increase towards late evening but only to about 70% by 21:00Z, which is well after the video ends.


A clear difference from the previous day, with lots of cirrus. It's hard at times to tell what is natural cirrus and what is contrails, but there are clearly many trails through the morning and early afternoon.

About 15:40 there's an interesting formation of three parallel trails coming in from the right of the screen: 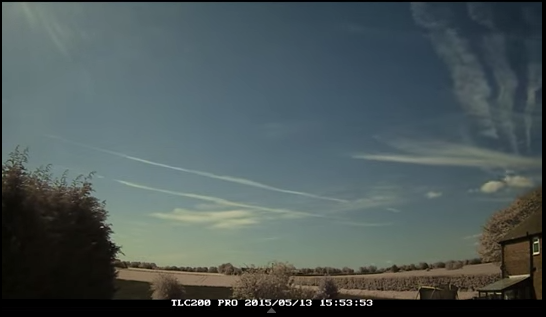 A sundog/halo fragment is visible in these same contrails right at the top of the frame as they drift southwards: 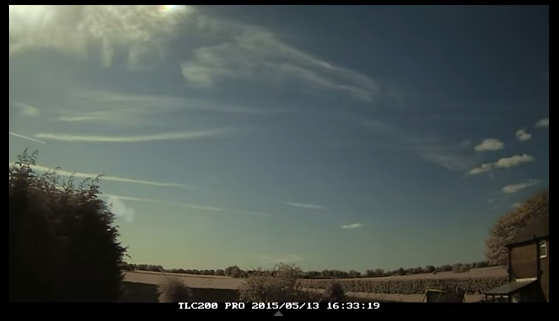 There was a trio of planes flying along very similar tracks just before this time, but I don't know whether they could have formed such a tight formation of trails! 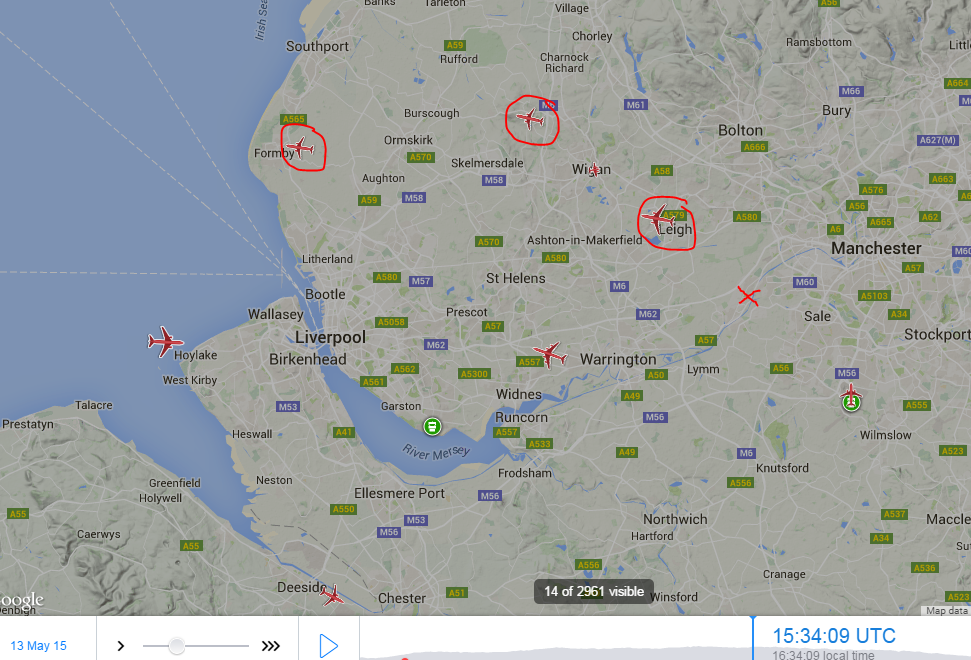 Staff member
Just going to upload the videos and charts here and do the contrail count afterwards in an edit. I'm also making the GIFs a bit slower, to make them easier to follow.

Staff member
May 19: some nice rainbows to begin with

Maybe an odd plane at a much higher altitude? I would occasionally see solitary contrails in Los Angeles that turned out to be planes at 40,000+ feet. This type of thing (from today) 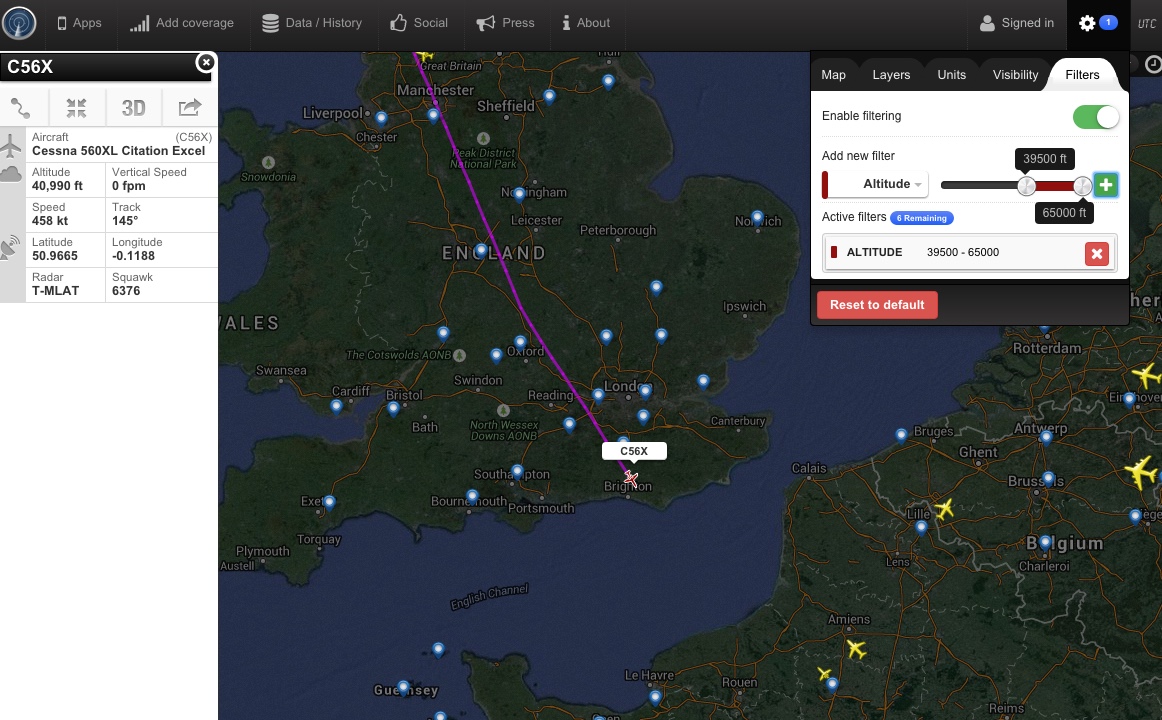 Mick West said:
Maybe an odd plane at a much higher altitude? I would occasionally see solitary contrails in Los Angeles that turned out to be planes at 40,000+ feet. This type of thing (from today)

Yes I wondered about that. Looking on Planefinder there was a plane at 40,000ft in the right location but the time looks to be a couple of minutes too late. I suppose it is possible that the time on the camera was slightly out. 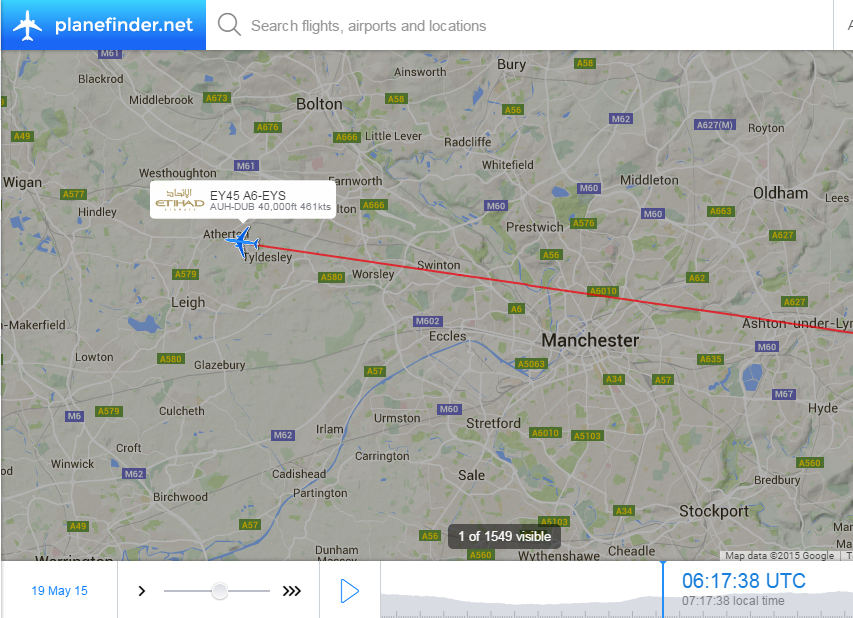 The previous flight along a similar track was this one at about 32,000ft, and 12 minutes earlier. A slightly incorrect clock looks more likely. 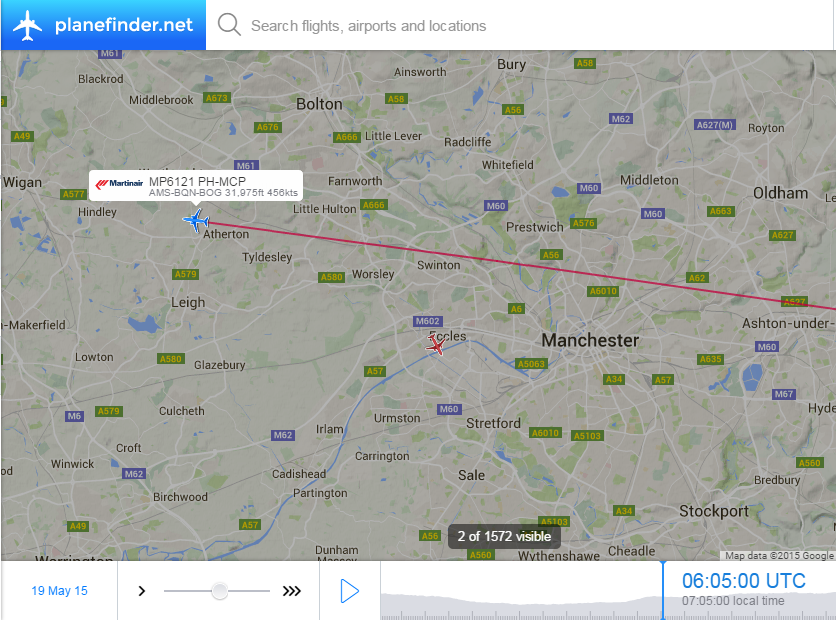 Edit: there are also a couple of trails roughly perpendicular to this one, visible at about 7:37 and 7:44. There are two possible flights, both at 37,000ft: 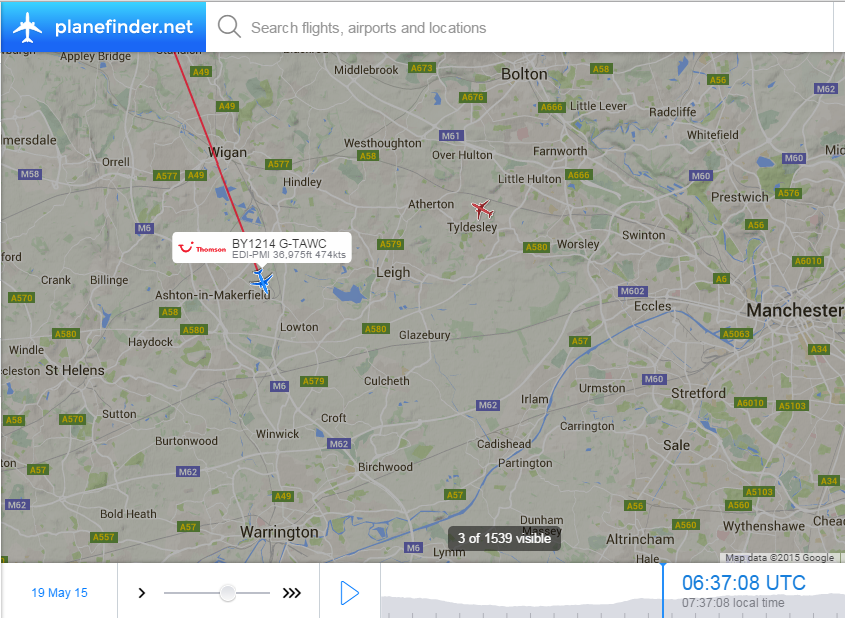 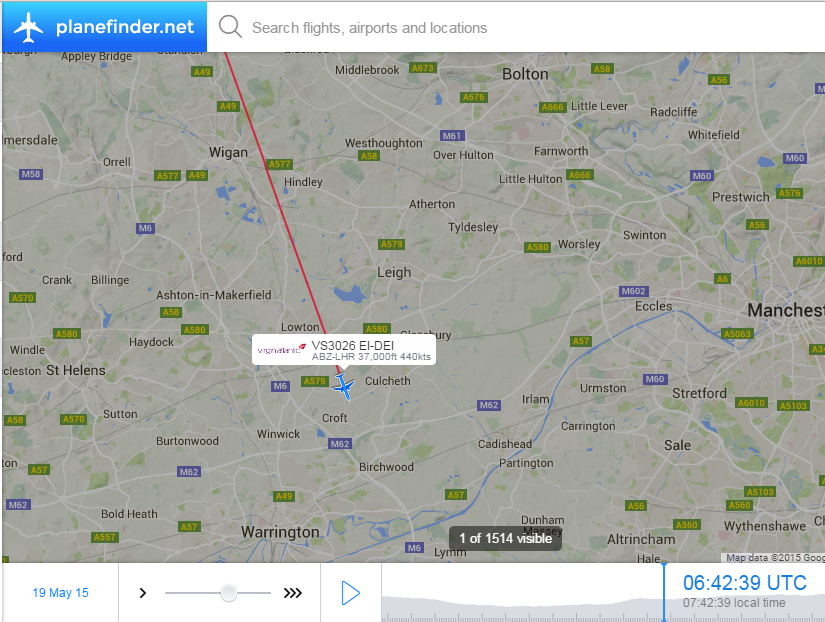 Staff member
An interesting overnight one too, from May 23/24: