For some reason, operation high jump is used by conspiracy theorist often to further their agenda. Admiral Byrd is in the middle of all this with many claiming that it he had a secret diary where he talked about a "hollow earth" and a "civilisation" within it.

From Admiral Richard E. Byrd’s diary February 19, 1947 “I’d like to see that land beyond the Pole. That area beyond the Pole is the center of the great unknown!” (was written before his 7-hour flight beyond the North Pole)

Apparently a secret diary was written, I'll link the link for the full entry but I'd like to point out a few bits of note.


The radioman and I are taken from the aircraft and we are received in a most cordial manner. We were then boarded on a small platform-like conveyance with no wheels! It moves us toward the glowing city with great swiftness. As we approach, the city seems to be made of a crystal material. Soon we arrive at a large building that is a type I have never seen before. It appears to be right out of the design board of Frank Lloyd Wright, or perhaps more correctly, out of a Buck Rogers setting!! We are given some type of warm beverage which tasted like nothing I have ever savored before.


'Yes, my son,' replied the Master, 'the dark ages that will come now for your race will cover the Earth like a pall, but I believe that some of your race will live through the storm, beyond that, I cannot say. We see at a great distance a new world stirring from the ruins of your race, seeking its lost and legendary treasures, and they will be here, my son, safe in our keeping. When that time arrives, we shall come forward again to help revive your culture and your race. Perhaps, by then, you will have learned the futility of war and its strife...and after that time, certain of your culture and science will be returned for your race to begin anew. You, my son, are to return to the Surface World with this message.....'

Byrd was forced by the pentagon to keep quiet.

March 11, 1947. I have just attended a staff meeting at the Pentagon. I have stated fully my discovery and the message from the Master. All is duly recorded. The President has been advised. I am now detained for several hours (six hours, thirty- nine minutes, to be exact.) I am interviewed intently by Top Security Forces and a medical team. It was an ordeal!!!! I am placed under strict control via the national security provisions of this United States of America. I am ORDERED TO REMAIN SILENT IN REGARD TO ALL THAT I HAVE LEARNED, ON THE BEHALF OF HUMANITY1111 Incredible! I am reminded that I am a military man and I must obey orders.

The final log was apparently in 1956 and Byrd just wanted to have this "secret" exposed.

This can be the only hope for mankind. I have seen the truth and it has quickened my spirit and has set me free! I have done my duty toward the monstrous military industrial complex. Now, the long night begins to approach, but there shall be no end. Just as the long night of the Arctic ends, the brilliant sunshine of Truth shall come again....and those who are of darkness shall fall in it's Light.. FOR I HAVE SEEN THAT LAND BEYOND THE POLE, THAT CENTER OF THE GREAT UNKNOWN.

I cannot find any source which states that this is indeed the Byrd's diary, many people still hold this alleged diary to be true and many have written books about his secret diaries.

I'm not sure when this started circling round, but based on the website linked with a few articles that reference the diary, the earliest this was was 2001.

ParanoidSkeptic2 said:
I'm not sure when this started circling round, but based on the website linked with a few articles that reference the diary, the earliest this was was 2001.
Click to expand... 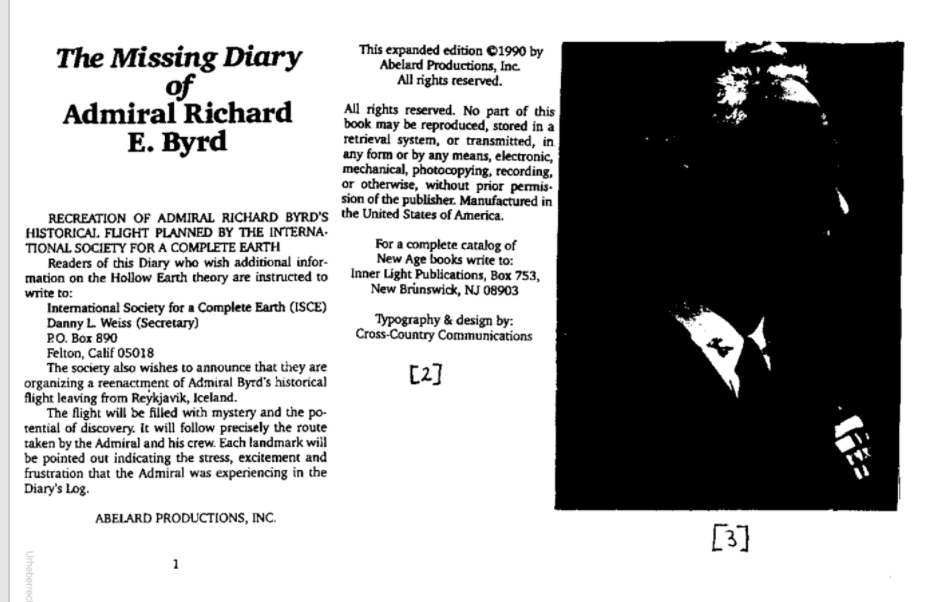 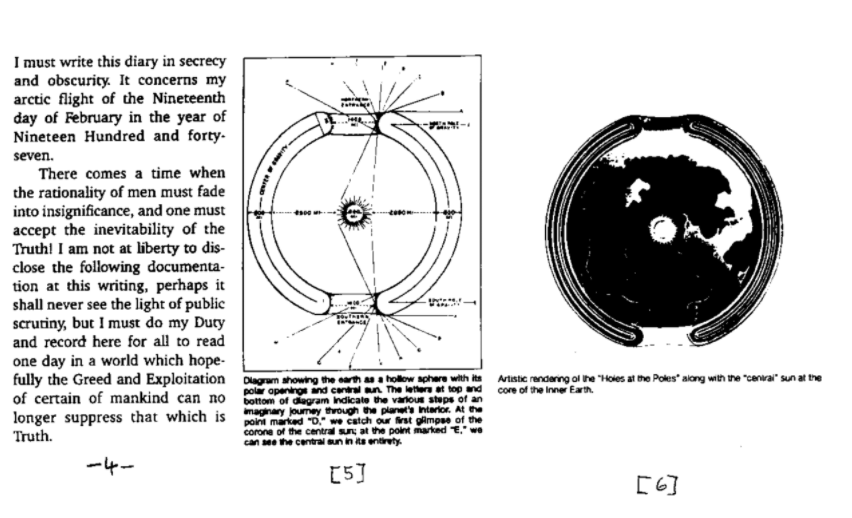 Google Books asserts the "platform-like conveyance" passage is also in a 1979 publication, but I wasn't able to view the text itself. (The trick was to restrict the search to 1990 or earlier.) 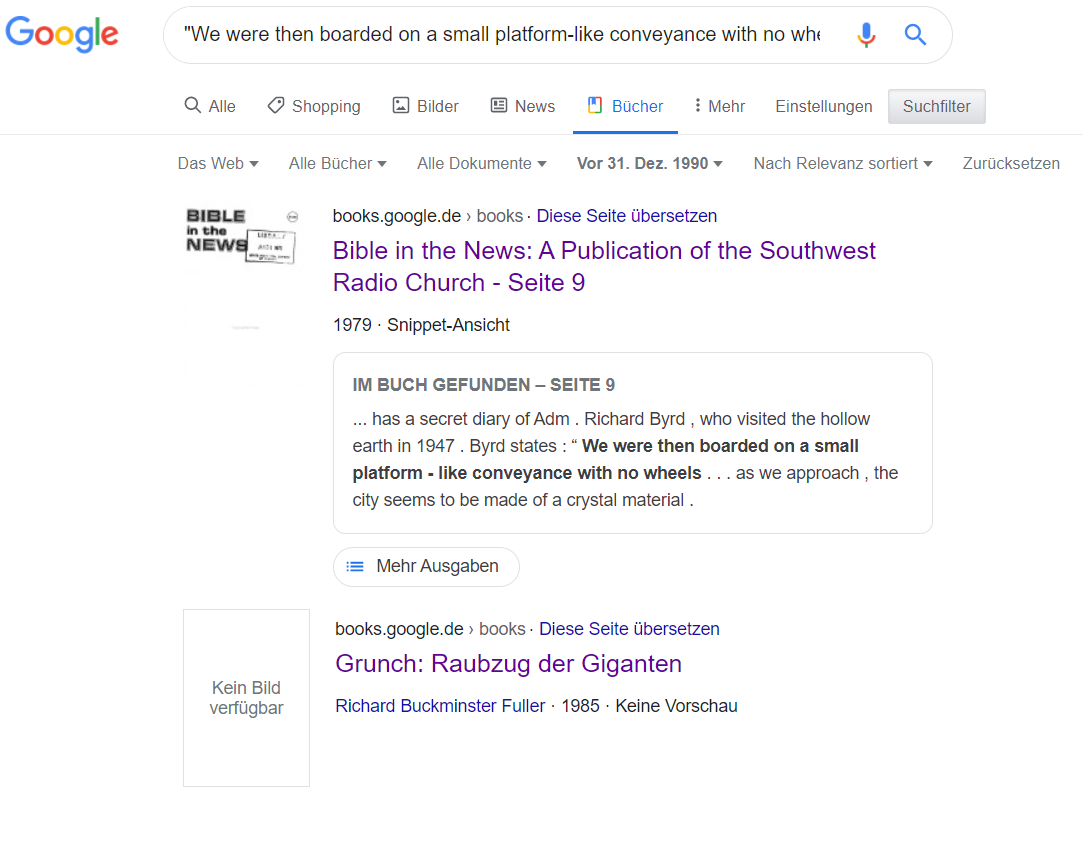 Mendel said:
Google Books asserts the "platform-like conveyance" passage is also in a 1979 publication, but I wasn't able to view the text itself.
Click to expand...

you can grab snippets, but i tried "Shoush" and couldnt get a first name. I was able to grab this which sounds like the original guy claiming to have the diary

The Secret Diary of Adm Byrd: Fact or Fiction

.........
February is the dead of winter in the Arctic with it’s well known 24 hours of darkness and unpredictable flying weather. However, the biggest negative ruling out a February 1947 Arctic expedition by Admiral Byrd was the indisputable fact that he was smack dab in the middle of the command of his life – “Operation Highjump,” the most extensive Antarctic expedition in the world.

The operation made front-page headlines around the world with reports about the Admirals personal movements broadcast around the world daily from January 2nd until his return to America on April 14th 1947. This would have made a North Polar flight during this time damn near impossible.

Captain Tawani Wakawa Shoush and The Society for a Complete Earth

The alleged diary first became available from an organization based in rural Missouri, which called itself “The Society for a Complete Earth” in the 1970s. The head of this organization was a Native American, Captain Tawani Wakawa Shoush. As Walter Kafton-Minkel explains:

“The society used as it’s emblem the crest of the Thule Society … Shush said he was a retired U.S. Marine and a pilot whose goal was to fly a dirigible into one of the polar openings and establish contact with the Arianni, (his spelling) the “tall blond, blue-eyed super-race” that rules the inner world. The Arianni, he wrote, spoke “a language very much like German” and lived in “cities built of shimmering crystal” and used their saucers – again called flugelrads – to patrol the skies of the surface world and keep an eye on us … Shoush sold copies of what he claimed was a suppressed diary kept by Admiral Byrd during his North Pole flight of 1947.”

When I first received the copy of this “diary” from Max Fyfield I wrote a report concerning the forward of the booklet which was written by a “Dr. William Bernard.” (See THEI Vol. 1#6, “The Two Bernards,” page 30).

In that article I accused Mr. Susch of being an opportunist out to make money and challenged him to prove me wrong. Although I had no proof, I felt strongly about it at that time. Those of us who are serious about these studies do not need false information seeded around. I feel even stronger about it now. And I believe that I now have the proof that this piece of trash is a phony.

In 1928 Admiral Byrd published his account of the 1926 North polar flight in a book titled Skyward. On page 196 Byrd reveals the following information:

“When our calculations showed us to be about an hour from the Pole, I noticed through the cabin window a bad leak in the oil tank of the starboard motor. When I took the wheel again I kept my eyes glued on the oil leak and the oil pressure indicator.”

Compare this information to the following passage from the so-called “secret diary.”

Once again, the odds of Admiral Byrd having the exact same problem with the same engine on two different flights 11 years apart would probably be about the same chance of you winning the next lottery.

ParanoidSkeptic2 said:
A lot of people refer to a "Land beyond the poles" that Byrd allegedly wrote down
Article: From Admiral Richard E. Byrd’s diary February 19, 1947 “I’d like to see that land beyond the Pole. That area beyond the Pole is the center of the great unknown!” (was written before his 7-hour flight beyond the North Pole) Source: https://stephwynne.medium.com/is-th...r-maps-the-man-who-knew-too-much-2781a6b0af5b
Click to expand...

from my above article (should probably add this to Quotes debunked)

The first mention of a 1947 North Polar flight by the Admiral can be found in the book Worlds beyond the Poles: Physical Continuity of the Universe (1959) by a controversial self-proclaimed scientist, F. Amadeo Giannini. On page 13 of his book under the heading “The Changing Scene 1927-1947” he presents a list of things that happened during those years to support his theory. One of the entries is:

Not only was this the first time a 1947 flight ever mentioned, but this also seems to be the origin of this often used quote attributed to Admiral Byrd and used by Hollow Earthers constantly to prove their point. The actual source of this quote was probably an article that appeared in the October 1947 National Geography Magazine titled “Our Navy Explores Antarctica,” in which the Admiral refers several times to the “Mystery Land beyond The Pole” although not in the sequence of words presented by Mr. Giannini. And most importantly of all … Byrd was talking about Antarctica.

deirdre said:
you can grab snippets, but i tried "Shoush" and couldnt get a first name. I was able to grab this which sounds like the original guy claiming to have the diary
Click to expand...


William Bernard Shoush (March 11, 1927 - January 4, 2002), also known as Tawani Wakawa Shoush, was an American author who wrote about Native American and Modoc-Klamath traditions, claiming Modoc lineage, including a popular story about his grandfather's encounters with Sasquatch (which he said were called Matah Kagmi) near Mount Shasta, California, and about theories regarding the Hollow Earth, toward which end he founded the International Society for a Complete Earth, publishers of the secret diary of Robert E. Byrd and claims regarding Nazi explorations of the "Inner World."

The hollow earth society was founded in 1977, incidentally two years before the publication of the alleged diary. 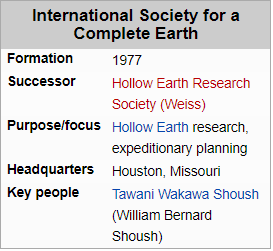 So, the most likely case is that the guy just made up some proof in order to further his pseudoscientific agenda?

ParanoidSkeptic2 said:
the guy just made up some proof in order to further his pseudoscientific agenda?
Click to expand...

looks like it. or he partakes in the peyote a bit too much and wrote the diary during some peyote trip then forgot he wrote it? (im trying to give him some benefit of the doubt... but surely he recognized his own handwriting)

interesting your quote mentions Nazis.. i was gonna point that out that the "ariyanni" (ie Hitlers Aryan race).. tall blonde and blue eyed, sounded alot like Hitlers thing which is odd, to me, for a Native American to emulate.
You must log in or register to reply here.