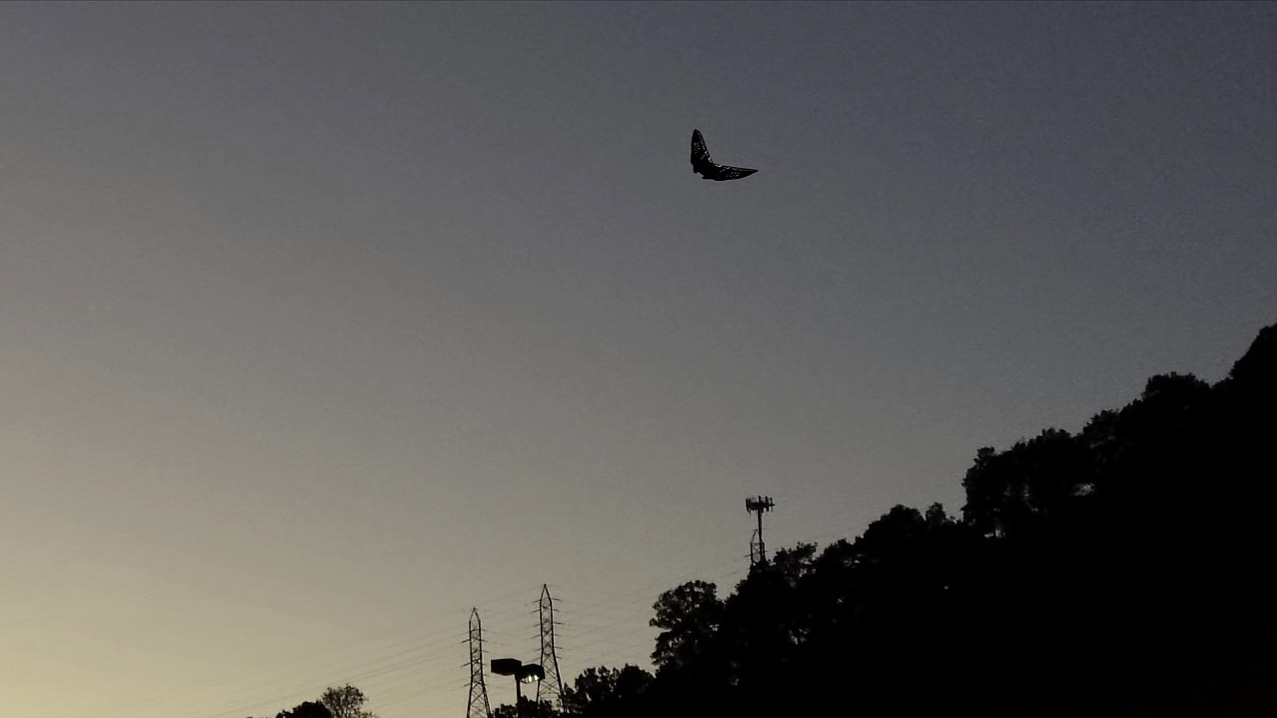 A video proports to show some kind of alien spacecraft. 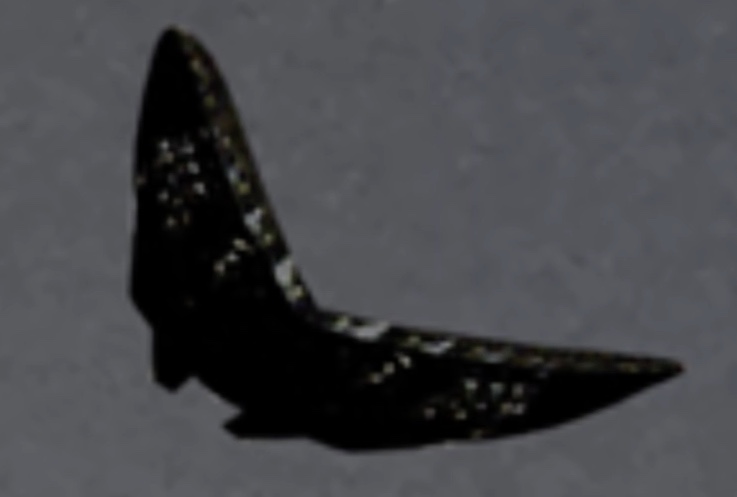 So assuming this is not simply a fake computer generated video, what might it be?

My first thought was that it might be a kite, however the video seems to show the object moving off into the distance to a degree a tethered kite could not.

My next thought was some kind of custom remote controlled flying wing, possibly with added LED lighting. perhaps something like a Swinglet: 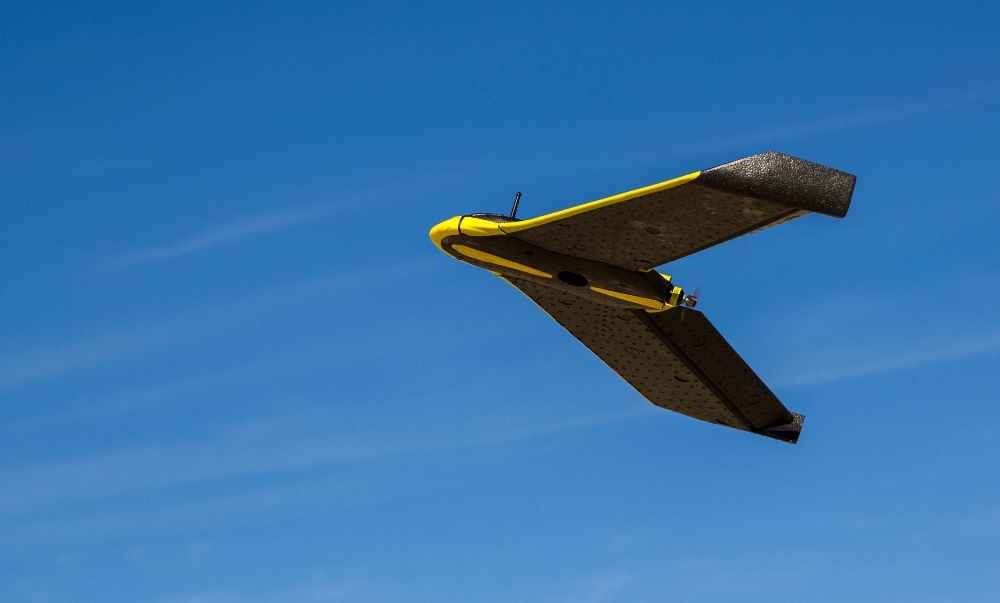 The problem with these is they all have a visible propellor. However a bit more research led to the EDF, the Electric Ducted Fan - a type of electric engine that can be mounted either on top of the RC aircraft, or internally in such a way as to be invisible from the ground.

EDFs are commonly used in RC jet planes, where a real jet engine is impractical. However they are also used in all kind of commercial and custom flying wing RC designs. Here's a top mounted engine on the Sonic 64 EDF Wing EPO 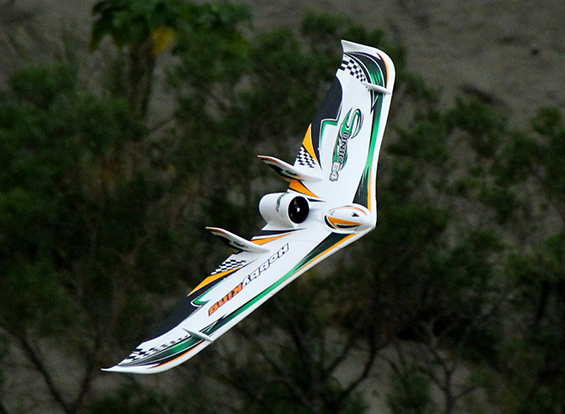 EPO is Expanded Polyolefin, a strong lightweight foam often used for model aircraft. This type of construction allows for quite large flying wings to be made, which can look quite UFO-like 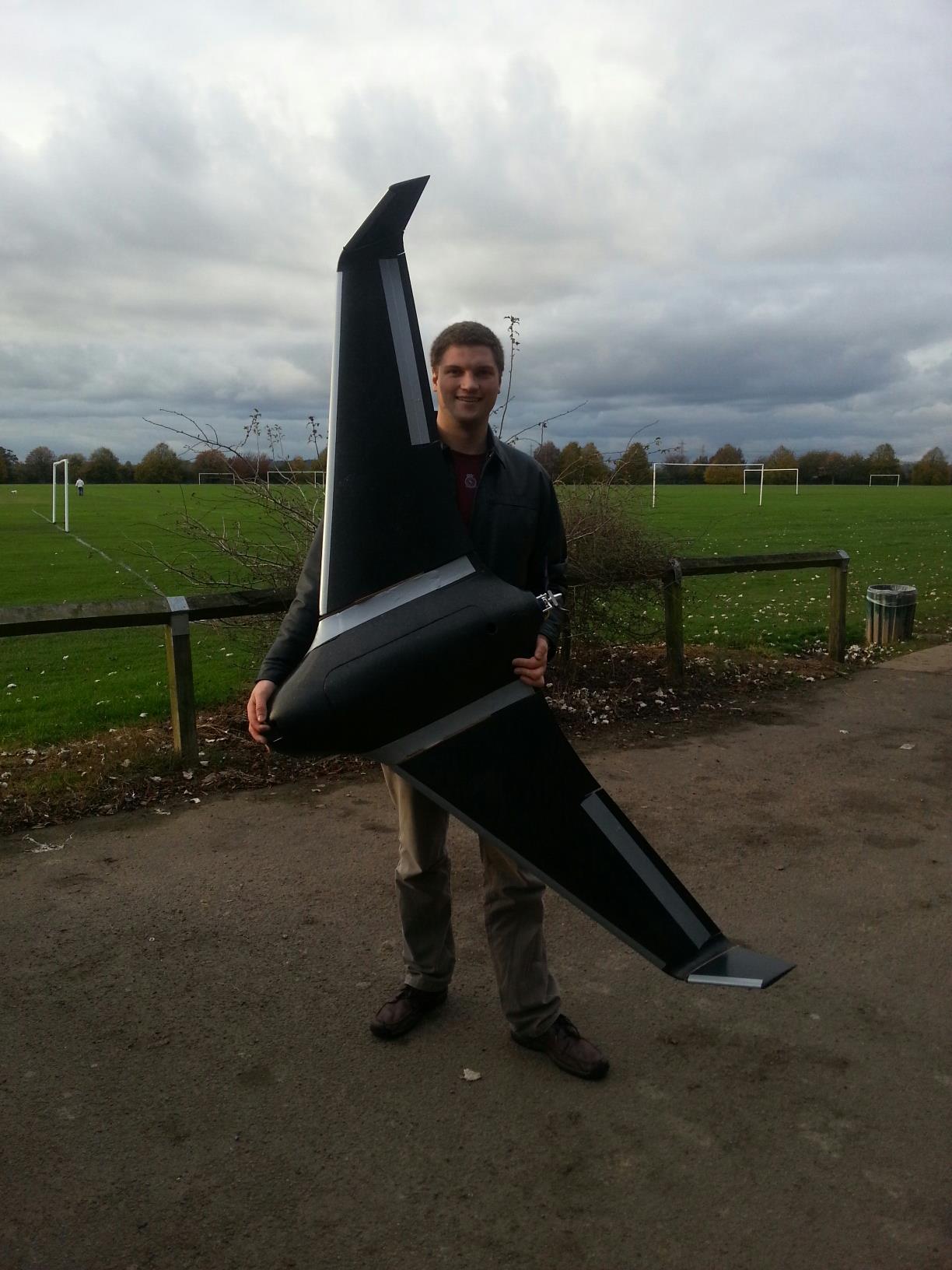 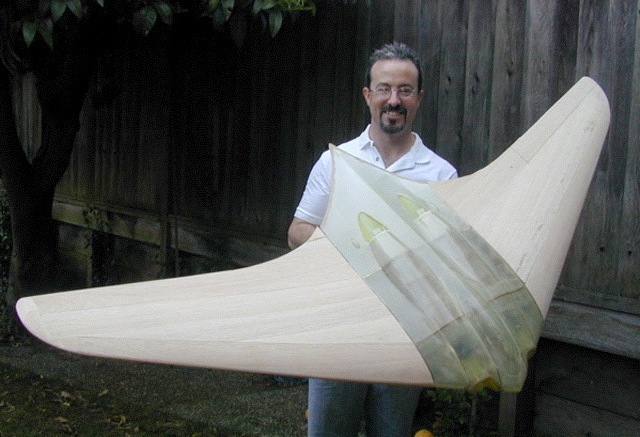 Of course we can't say for sure it's not an alien spacecraft, but given the large amount of very straightforward alternatives, I think I'd put that at the bottom of the list.
Last edited: Nov 11, 2015

ParaBreakdown looked into it. He checked the weather for the date in question and it does not match the video. Plus it comes from a known UFO hoaxer.

How come the video is so grainy yet they can get screen grabs of astounding quality?

Interesting to see they still refer to "TR3B" in relation to flying wings in the description. Why not throw an Aurora in there for old times' sake?

The story of 'Tier III' is fairly interesting, but lacks any Zeta Reticulans.

Even the camera shake and autofocus looks fake, let alone the interstellar transportation.

We don't forget that youtuber SecureTeam10 is a hoaxer:

Secureteam 10 (Glockner, Tyler) – Originally this channel simply used deceptive interpretations of footage, such seeing objects in moon rocks that aren’t there, or promoting an analysis of a “possible alien skull found on beach” which is… wait for it… just a rock. Since then this channel has created simple manipulations with Photoshop and/or visual effects software, usually only lasting a couple of seconds. On several occasions Glockner has attempted to bolster the credibility of his videos using “witnesses” that turn out to be unconvincing performers and Tyler himself with a pitch filter applied to his voice. He also attempted to have a UFO Theater debunking video removed from Youtube and Vimeo with false copyright claims.
Last edited: Nov 12, 2015

i cant figure out why the still pics and the video dont match. where would the father and son have to be standing to get these different angles of ufo? 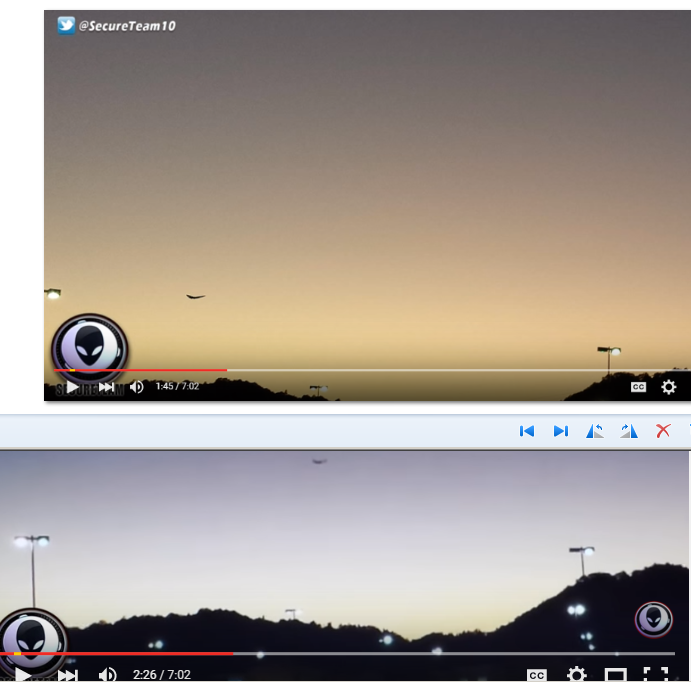 The lower one is panned down so you can see more of the hills and looks a bit off level compared to the top, but if you cover the lower portion of it it's pretty close. The "UFO" was moving, so you can't use that to guage the viewing angle, they could simply be a few seconds apart.

That being said, it honestly looks to me like it was inserted into the video, most likely by way of CGI. As was already mentioned, it's a bit too high quality for that tape.

Staff member
Yeah, "fake" would be pretty high on the list. I was just thinking what it might be if it were not a digital fake. Of course it could also be a deliberate hoax with an RC aircraft.

If a faker wanted to use practical techniques something like that would be relatively easy to produce with an RC flying wing as Mick has indicated. They are relatively cheap and easy to make from scratch , or modify a existing foam model, fit lights inside a transparent corflute version etc and relatively easy to fly for someone with some RC aircraft experience, although the object in the video is flying very slow for a powered rc flying wing and very steadily.( A powered RC flying wing covers a LOT of sky quite rapidly). To fly that slow relative to frame would require a brisk headwind and headwinds impart turbulence which usually throws models around a lot and induces a cyclic yawing in flying wings. As someone who owns a number of RC flying wings of various sizes and controls them by eye (ie to be able to fly them at all you must you get very used to their character of motion in the sky to sense response to control signals, gusts, windshifts, uplift, turbulence, impending stalls, tail heaviness or cg shifts etc (also fly hanggliders) imho it hovers vaguely similarly to a FW slope soarer in a very steady uplifting wind above a slope. (although can't see that the ground topology below looks all that suitable for slope soaring.) You can see occasionally in the following vid that an RC glider can hover very steadily on a slope but no-one tends to do that if they think someone is filming!
However generally there's a weirdness to its motion that suggests animation rather than piloting.
I'd suggest the dudes or dudettes probably just did it cgi as it saves them needing any physical technical skills .
It's interesting some comments suggesting such a shape is impossible for human technology and far beyond U.S. military etc... which is rather far from the case. Easy to make something like that at home with some old signage boards.
http://www.rcgroups.com/forums/showthread.php?t=771808

it's a home made RC plane.

Alix said:
it's a home made RC plane.
Click to expand...

How do you know?

I keep seeing this when I come here, it's been at the top for a while now. I watched the video, GregMc is right, it is going very slow, It would have to be very heavy if it's a actual object, not getting buffeted at all, unless the film has been slowed down, which would account for the grainy texture of the video compared to the stills.
And looks like it is high up, or appears to.

But my interest is peaked with the rear, the depth of the wing, it looks like it's pretty thick 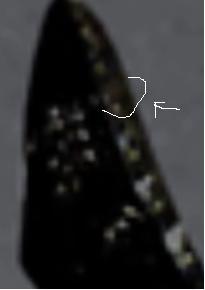 And this stuff on the bottom looks very un-aerodynamic 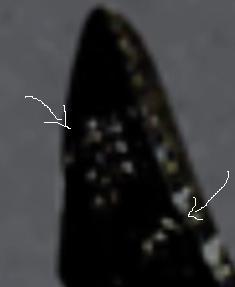 Don't think that proves or disproves anything other than I don't think it's a R/C.
I just kept seeing it and felt that it should be pointed out. If these guys are know hoaxers, as ufoofinterest stated, then they were stupid to cry wolf, because now no one will believe them if the do capture a real craft, Military or other-world/other-dimension/time-traveler.
Last edited: Nov 23, 2015

Funny how the video was dubbed with spooky music instead of the ambient sound. That is practically proof that it's fake right there! 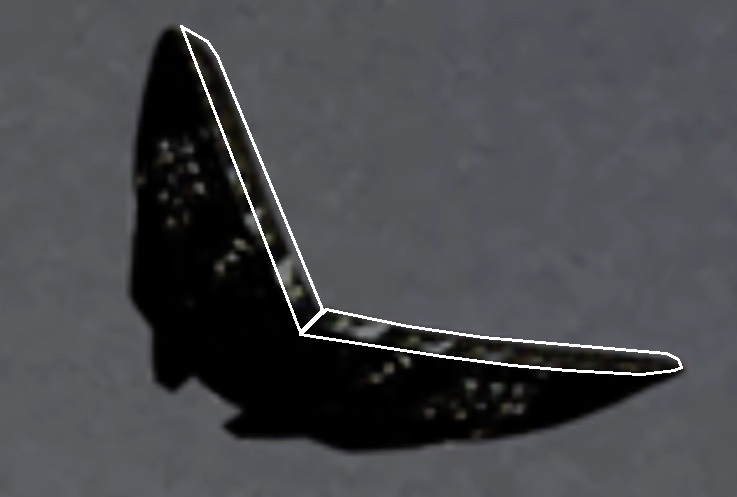 The final debunking dedicate to this hoaxer. A great work!