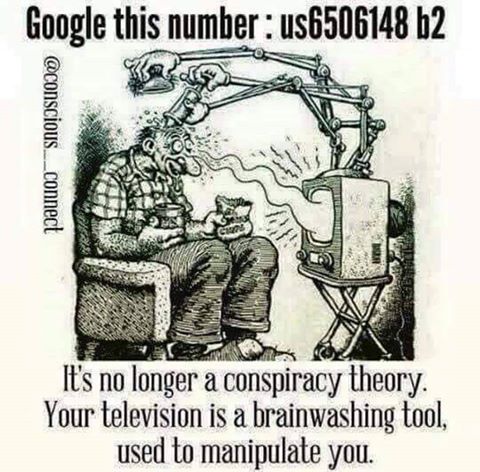 Physiological effects have been observed in a human subject in response to stimulation of the skin with weak electromagnetic fields that are pulsed with certain frequencies near ½ Hz or 2.4 Hz, such as to excite a sensory resonance. Many computer monitors and TV tubes, when displaying pulsed images, emit pulsed electromagnetic fields of sufficient amplitudes to cause such excitation. It is therefore possible to manipulate the nervous system of a subject by pulsing images displayed on a nearby computer monitor or TV set. For the latter, the image pulsing may be imbedded in the program material, or it may be overlaid by modulating a video stream, either as an RF signal or as a video signal. The image displayed on a computer monitor may be pulsed effectively by a simple computer program. For certain monitors, pulsed electromagnetic fields capable of exciting sensory resonances in nearby subjects may be generated even as the displayed images are pulsed with subliminal intensity.

Both Patents exist since 2001, with different US Classifications.

Sensory (e.g., visual, audio, tactile, etc.):
This subclass is indented under subclass 26. Subject matter wherein the state of tranquility is produced upon the body by devices and techniques applied to or stimulating the body"s senses of hearing, sight, smell, taste or touch.

With feedback of signal to patient:
This subclass is indented under subclass 544. Subject matter wherein the detected signal, or an output responsive thereto, is presented to the patient.

(1) Note. Included in this subclass are means, referred to in the art as "biofeedback" apparatus, for enabling a patient to perceive, for example, his or her level or state of brain activity.

MAGNETIC FIELD APPLIED TO BODY FOR THERAPY:
This subclass is indented under the class definition. Subject matter wherein an force field generated by a magnet is applied to the body for therapeutic purposes.


Now, after I've gotten those numbers out of the way.

What I Think the creator is jumping on is the following part:

Certain monitors can emit electromagnetic field pulses that excite a sensory resonance in a nearby subject, through image pulses that are so weak as to be subliminal. This is unfortunate since it opens a way for mischievous application of the invention, whereby people are exposed unknowingly to manipulation of their nervous systems for someone else's purposes. Such application would be unethical and is of course not advocated. It is mentioned here in order to alert the public to the possibility of covert abuse that may occur while being online, or while watching TV, a video, or a DVD.

Easy, its already a warning in the patent.

But whats happening? Do they describe some outcome?

As far as my understanding goes, they fiddled around with the frequency and on some specific frequencys ptosis occured.

This test was done with a 15" pc-monitor. (stated somewhere in the text above where I took my quote)


Ptosis (from the Greek word πτῶσις "falling", "a fall", "dropped") refers to droopiness of a body part. Specifically, it can refer to:

Its very interesting, especially because there is already a warning in the patent. But I really can't figure out a use for dropping eyelids in front of the tv..
Some new "sleep tight" chanel? watch it and get tired?

And even if it had a use to broadcast it all over the world, I can really think of problems already due the many different individualls we all are. (many might not react as expected)

Well, that was about what I got together during lunchbreak, I look into it a little more this evening or tomorow.


edit: taken from an other filed patent by mr. Hendricus G. Loos
Pulsative manipulation of nervous systems
US 6091994 A
results by pulsative cooling on the subjects skin.

At present, two major sensory resonances are known, with frequencies near 1/2 Hz and 2.4 Hz. The 1/2 Hz sensory resonance causes relaxation, sleepiness, ptosis of the eyelids, a tonic smile, a "knot" in the stomach, or sexual excitement, depending on the precise frequency used.

There is no mention of the other effects in the pulsing image patent though but were talking about about the same frequencys and about the same field.
Last edited: Jun 22, 2016

As far as the magnetic field patent goes, presumably that would only be relevant for CRTs anyway, since flat-panels don't use a deflection coil?

Ray Von Geezer said:
As far as the magnetic field patent goes, presumably that would only be relevant for CRTs anyway, since flat-panels don't use a deflection coil?

Should work on both, it seems to be working on the electromagnetic field all electronic devices produce while turned on.

It will be shown that for a CRT or LCD screen emissions are caused by fluctuations in image intensity.