Staff member
The purpose of this post is to provide a reference for the various studies of the WTC dust, with specific attention to anything relevant to supposed evidence of thermite or explosives (like iron microspheres, and flakes of red paint).

It's not light reading. I might summarize at some point. 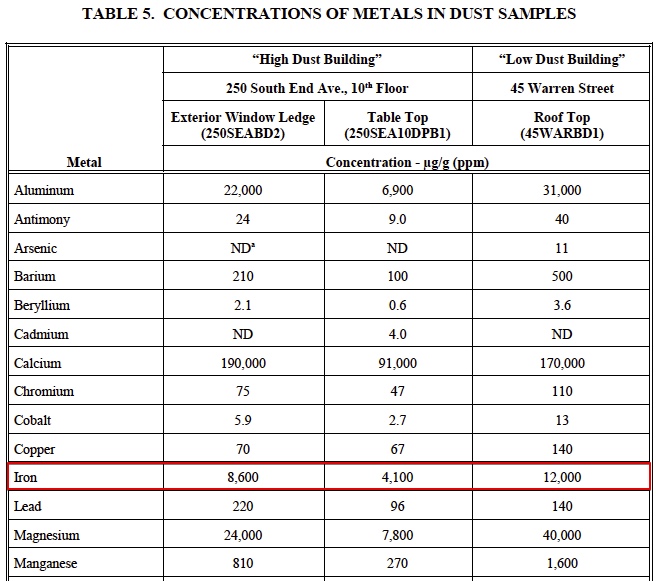 Very brief mention of iron:
"In addition to the elements quantified by ICP/MS analyses, the SEM dispersive X-ray analyses showed large signals for iron and calcium, which are major components of construction materials. Similar observations were found for silicon, which is consistent with the glass fragments and fiberglass found in each sample."

Does not mention iron, but does mention "Metal Flakes" and "Paint Particles" 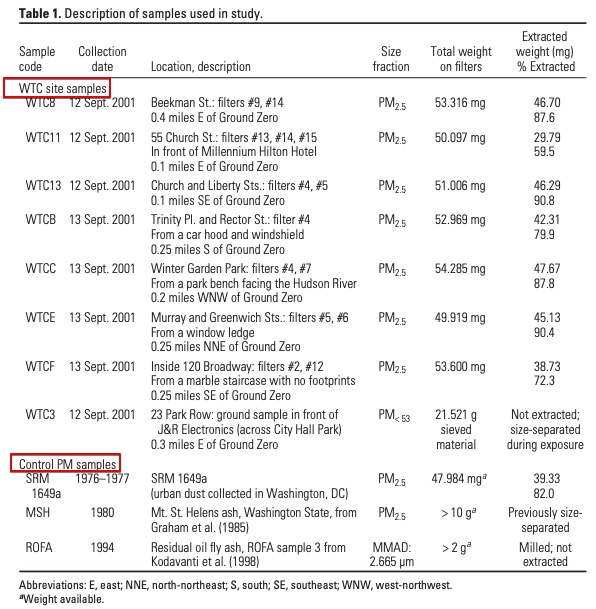 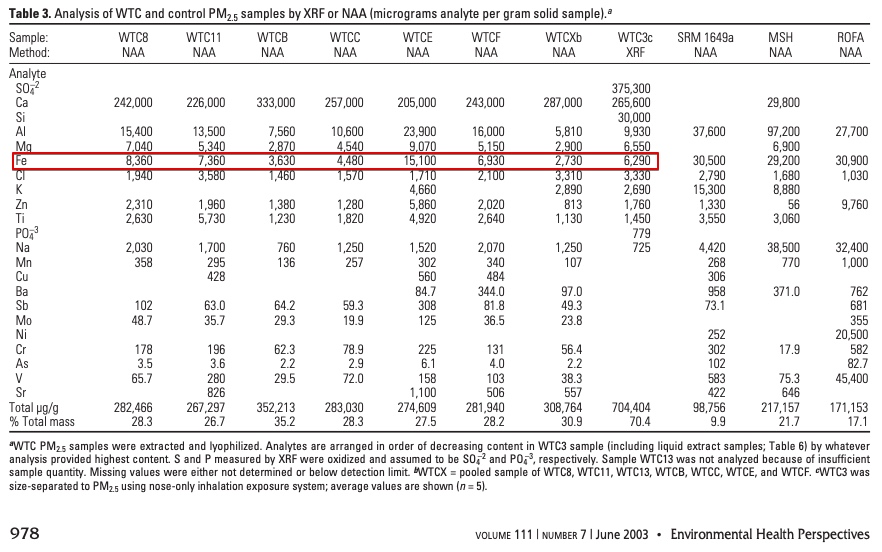 2003 - R.J. Lee investigation of 130 Liberty Street (Samples after May 2002, published Dec 2003)
Various reports. Most famously for "Composition and Morphology", which has a figure of 5.87% next to "Fe Sphere" under "Mean of Composition" in a table described as "Statistical P-values for the comparison of TP-01 dust and dust in Background Buildings." (which seems wrong, as these are not p-values). 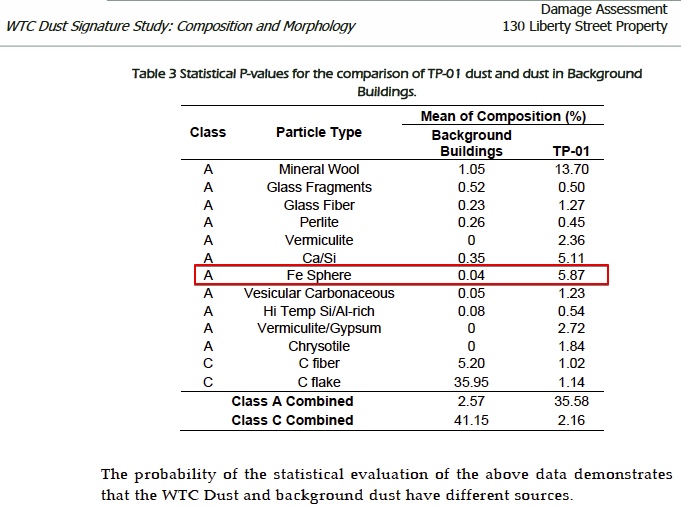 The values in Lee are hard to interpret. What do they actually mean? Why is the combined Class A particle types 35.58? Other studies say mineral wool alone is over 50% of the composition.


2004-2005 - The EPA Expert technical review Panel.
https://web.archive.org/web/20080306030000/http://www.epa.gov/wtc/panel/meeting-20040331.html
Multiple meetings, with a variety of presentations and discussion on developing a signature for WTC dust. They did reference the Lee study a few times, but not in any great detail. I could find no mention of iron spheres, but I've been unable to do a comprehensive review, as there's a few hours of audio, and many pages of reports. This is from the final report, and is the only substantive mention I could find:
https://web.archive.org/web/2008030...tc/panel/pdfs/Final_Report_August_17_2005.pdf


Other studies also identified MMVF and gypsum as predominant components of WTC dust. In a study of air and settled dust quality in apartments in Lower Manhattan, the Agency for Toxic Substances and Disease Registry (ATSDR) and the New York City Department of Health and Mental Hygiene (NYCDOMH) found significantly more MMVF and gypsum in samples taken from Lower Manhattan apartments as compared to samples taken from apartments in areas above 59th Street (NYCDOMH/ATSDR, 2002). They also concluded that gypsum was seen at a higher percentage level in the Lower Manhattan dust samples as compared to the comparison area samples. In a comprehensive study of the composition of settled dust in the Deutsche Bank building at 130 Liberty Street, R.J. Lee identified numerous hazardous contaminants that were present in the dust at levels much higher than in background office buildings, and among those substances identified in their “WTC signature” were mineral wool and gypsum (R.J. Lee, 2004).


2005 - Heather A. Lowers and Gregory P. Meeker
Particle Atlas of World Trade Center Dust, USGS
"The primary metal and metal-oxide phases in WTC dust are Fe-rich and Zn-rich particles (Meeker and others, 2005b). "
Discusses glass spheres, but not iron spheres.
Contains four spectra of iron particles, two of which are spheres. All have lots of oxygen.
https://pubs.usgs.gov/of/2005/1165/508OF05-1165.html#heading08

Does not mention spheres. Gives similar elemental compsition of Iron-rich to before 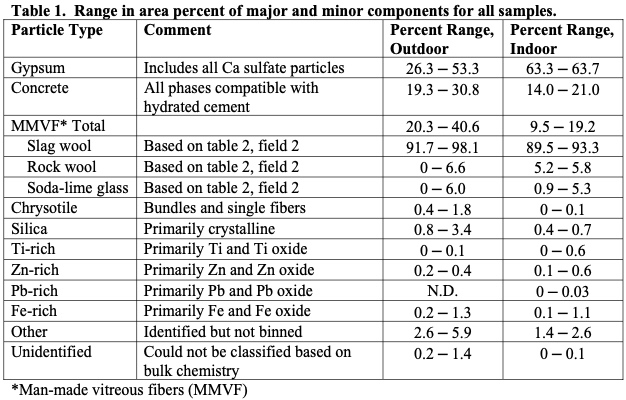 "Data presented here suggest that the presence and relative abundance of the three MMVF components – slag wool, rock wool, and soda-lime glass – along with the presence of concrete particles and gypsum could be used as a primary diagnostic signature for WTC dust. Secondary signature components could include FeOx, ZnOx, silica, and chrysotile. " 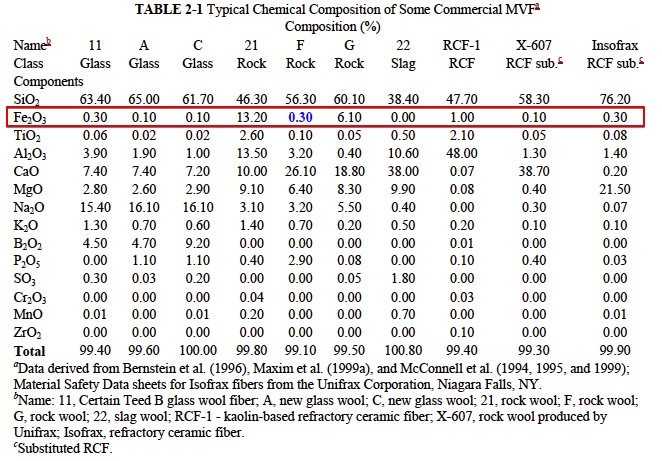 Which does not really seem to tally with:

During this process several alternatives for a signature were seriously considered and eventually rejected for a variety of reasons. Records of the discussions regarding these alternatives as primary signature components are in the Panel Meeting summaries and other available documents. Alternative signature components that were discussed include combinations of trace elements (e.g. antimony and chlorine), asbestos, PAHs, iron spheres, and others. Even a proposal to use the behavior of microorganisms exposed to WTC dust was brought to the attention of the WTC Expert Technical Panel. The proposal to use slag wool as the primary signature component was judged by many on the WTC Expert Technical Panel and others to be sound for several reasons.

A very brief passing mention of "iron spheres" as a possible signature component. Probably based on the Lee report. Note it's lumped in with "trace elements", so the presence there does not indicate a lot of them.
Last edited: Oct 28, 2018

Staff member
2009 Lowers, Meeker, Lioy, Lippmann.
Summary of the development of a signature for detection of residual dust from collapse of the World Trade Center buildings


Dust generated by the WTC collapse was collected from outdoor and indoor locations at
various distances from the WTC site by USGS scientists (Clark et al., 2001; Swayze et al.,
2005). Samples USGS 4, 6, and 12 were collected at ground level between September 16
and 17, 2001, at distances of 0.80, 0.60, and 0.55 km, respectively, from the center of the
WTC site (Figure 1). Dust collected at these sites was exposed to a rainstorm before
collection. Sample USGS 36, collected on September 12, 2001, was obtained from inside a
30th-floor apartment 0.40 km from the WTC site. 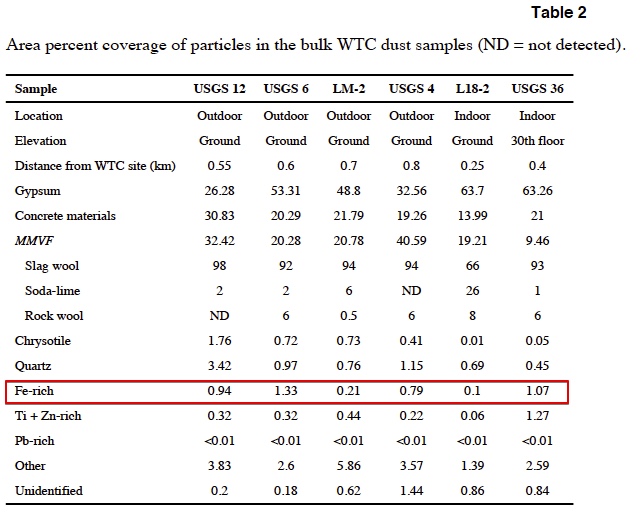 "Fe-rich = Primarily Fe metal and Fe oxide"
Iron rich "area percent coverage" is similar to numbers for other studies, 0.1 to 1.33%. Note it's "area", not mass.
No other mention of iron. No mention of spheres.
Concludes that slag wool is a good fingerprint for WTC dust.
Particles were binned (counted) by type, including morphology (shape). But no mention is made of spheres.

Clarke also noted that Dan Pring had researched the RJ Lee Group and had some concerns. For example, the RJ Lee Group concluded that their samples containing fly ash/vitreous spheres were produced from the WTC fires. However, they did not rule out other potential sources of fly ash contamination, including coal-fired furnaces, electrical generation, or other sources. Meeker agreed that it would be good to have Pring involved, as well as Jim Mollett at MVA. There are many laboratories and workers that may be useful to this effort.

Meeker noted with interest the identification of glass spheres in the samples, since most of the glass spheres are part of the slag wool product and would not be produced from the fires. They would have the same composition as the fibers. They could be used as part of the signature, but they are part of the original material, not from the fires. Lippman noted that this observation does not eliminate coal effluent as a source, since slag is simply a by-product of the steel industry made into fiber, and contains shot as well.

Note this is glass (vitreous) spheres. But it's interesting in the context of steel microspheres too. The largest component of the dust was slag wool, and "slag is simply a by-product of the steel industry", which means at some point it was in contact with iron microspheres. At the very least it will contain some iron compounds.

Looking at this sample, the fibers and the sphere were analyzed: 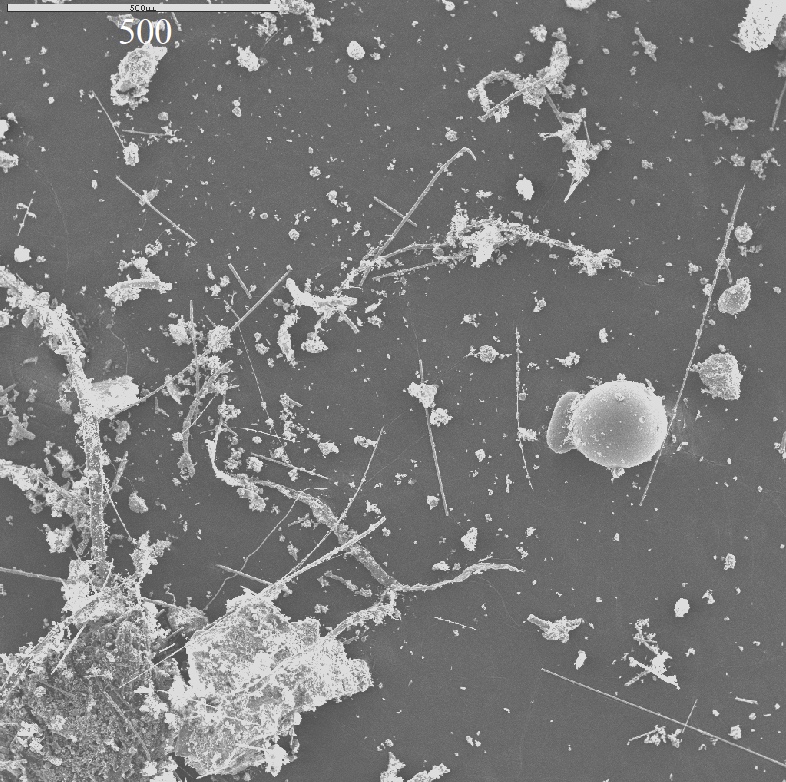 And were found to be glass. 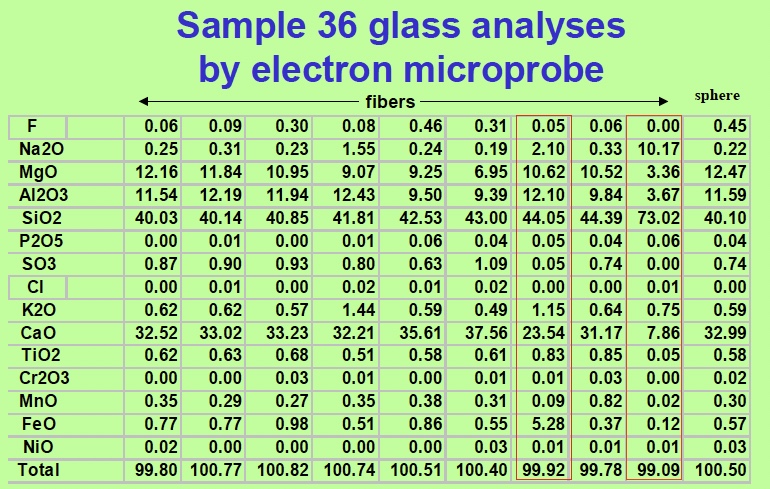 The composition of the sphere matched the fibers. The FeO (Iron oxide) was <1% in everything except one fiber