Very strange behaviour of some chemtrail spraying "planes".
Or are they something other?
Audio commentary in german. Mostly mumbling to myself.

I believe they are using the military airport not far from here. Again i may be wrong.


Content from external source
Puchheim is just West of Munich, in the south of Germany. 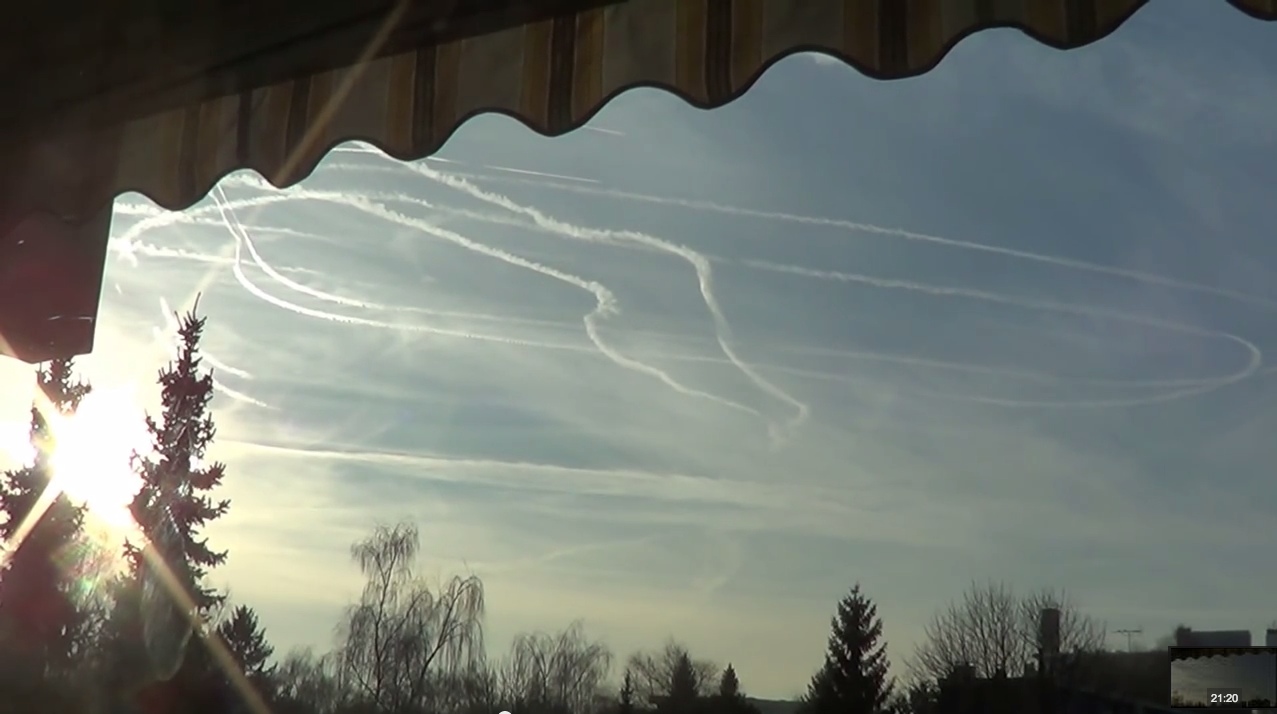 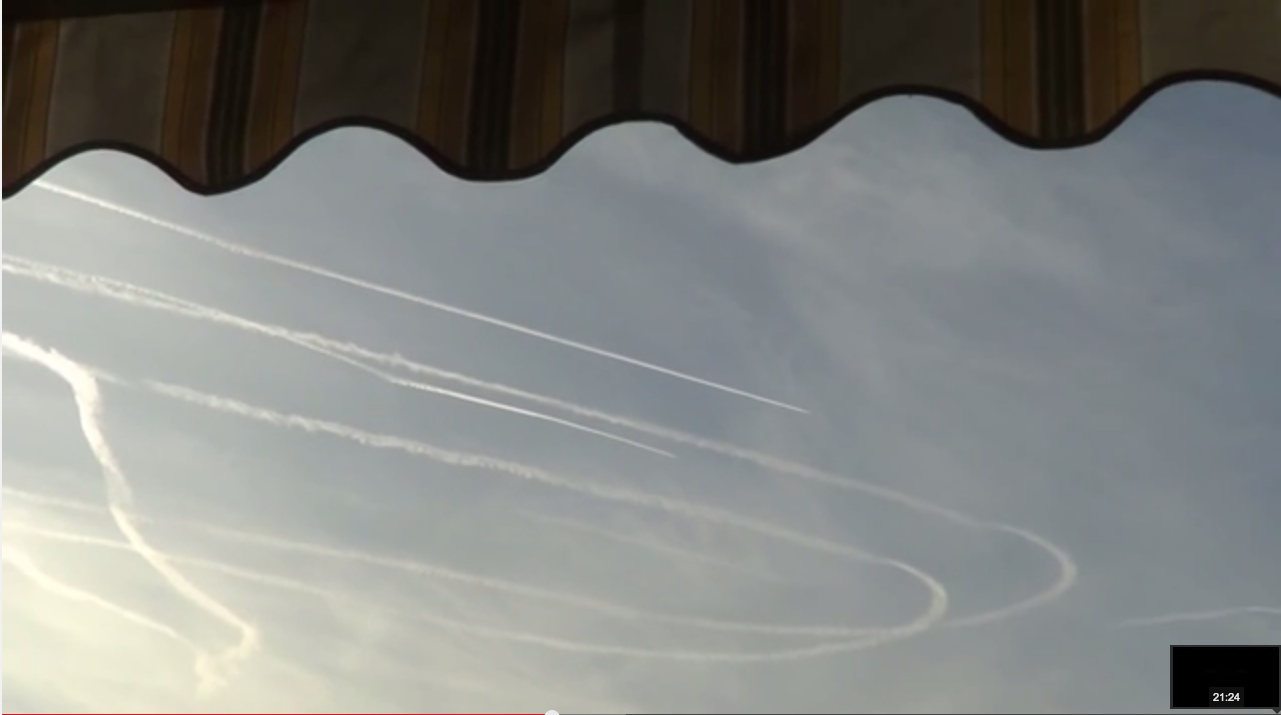 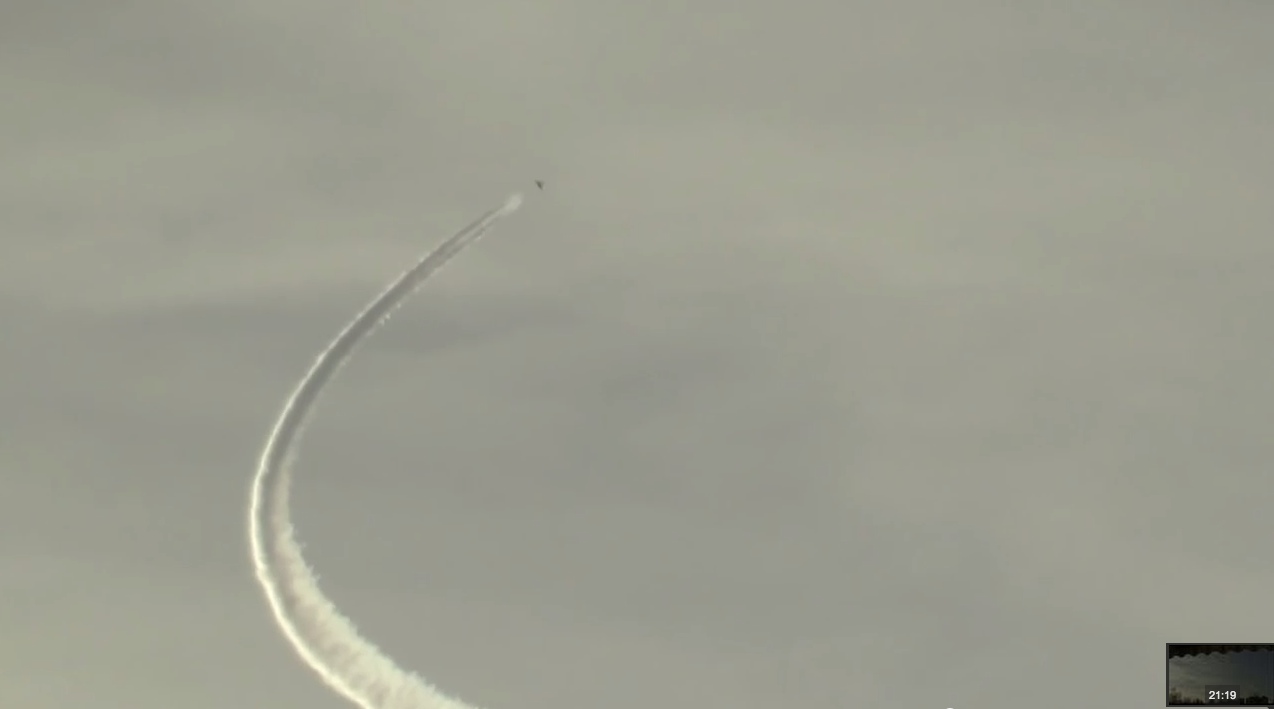 They just look like a couple of military jets practicing holding patterns. But I've never seen two jets do a hold together. [Edit: although it's not really a hold, as they are doing a bunch of other maneuvers too. More likely a practice exercise of various maneuvers] 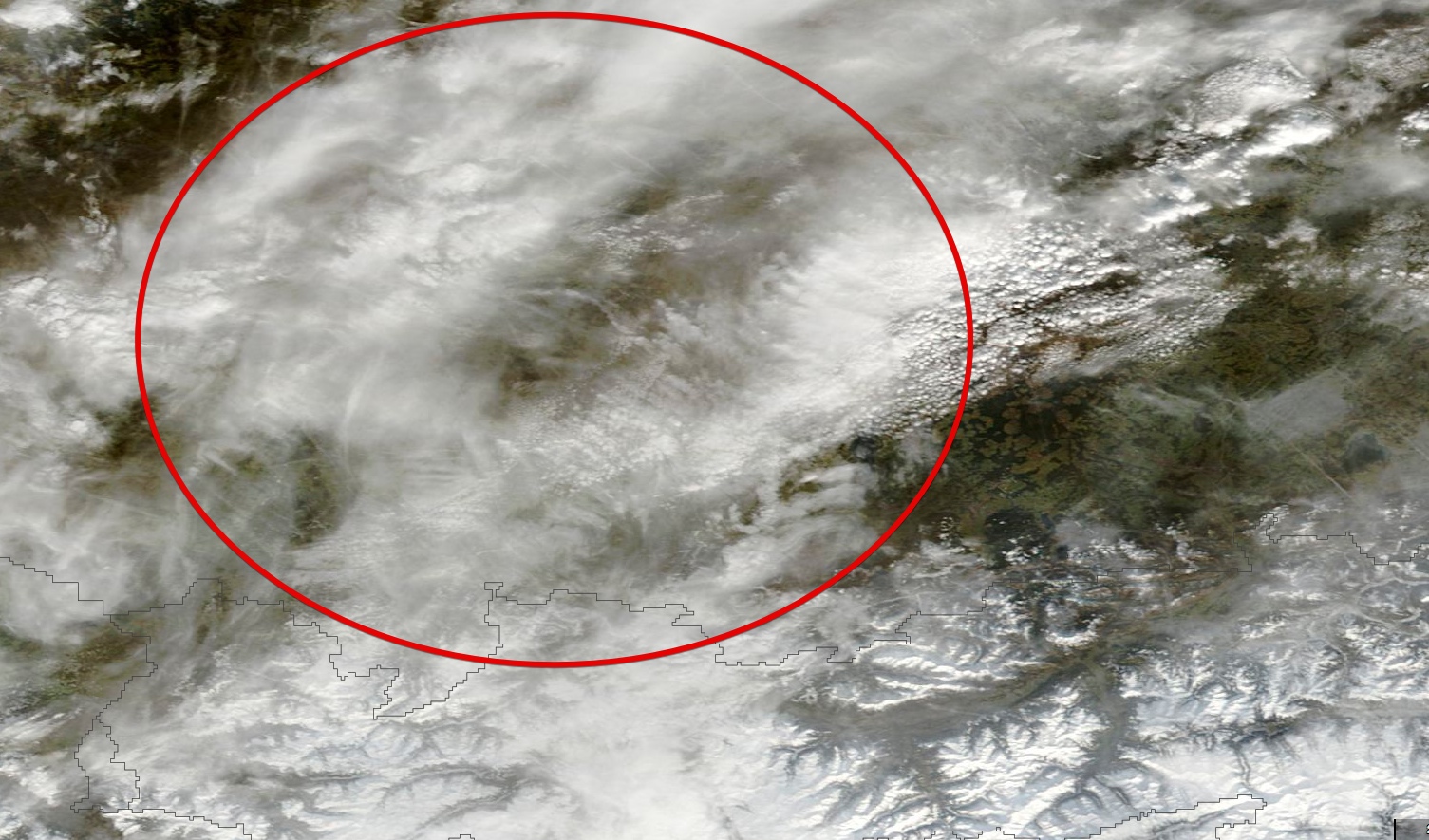 They just look like a couple of military jets practicing holding patterns. But I've never seen two jets do a hold together.
Click to expand...

Can't say definitively, but that looks very much like a Eurofighter Typhoon as operated by the Luftwaffe. Two jets holding together would be routine for the military - a pair is the basic operational element for most tactical aircraft.
Last edited: Mar 17, 2014

My only input is that both appear to be "around military speed" due to speed and contrail distance from aircraft, and that they're not in holding pattern due to such speed. I can't fathom why they'd be repeating this racetrack course except it does seem to be at high speed - something not usual with holding patterns.

What is "military speed"?

A holding pattern is generally 4 minutes - each side and each 180 degree turn are 1 minute long, and they are pretty unlikely to be going supersonic while doing so - which means the maximum speed they'll be doing is 600mph - more-or-less the same speed as a civil airliner in cruise.

ICAO standard holding pattern speeds are included in PAN-OPS document 8168 vol I:
(Table I-6-1-1. Holding speeds - note it is a big pdf document)
I don't know how high those fighters are - but I don't think it would be too hard to imagine them as being above 34,000 feet.

They are not flying holdings...

German Airforce-Pilots have one big problem: Germany is to small for training Pilots to fly Supersonic Figthers on their own small places. They are reaching the borders of an Temporary Reserved Airspace for military purpuse very often. So the have to take an U-Turn if they reached a border of such an TRA (see http://de.wikipedia.org/wiki/Flugbeschränkungsgebiet )

These U-Turns are very common in Germany near the most-important bases of the german Airforce...

Here you can see all Bases of the german Airforce.
http://de.wikipedia.org/wiki/Liste_der_Fliegerhorste_in_Deutschland
The Video in the first Posting was made near Munich (Bavarian), as you can see on the map, there are a lot of "Fliegerhorst" (Airbases) in Bavarian.

BTW: 2 Euro-Figthers nearby are common in the schooling for Eurofigther-Pilots. The Eurofigther is a one-seat-airplane, the Pilot in Practice has to learn how to fly alone - with his teacher on another Aircraft beside him. Some Eurofigthers are 2-seated for training-purpose, but in training a new pilot there will be allways the point, where the Student-Pilot have to fly on his own - controlled by his teacher beside him.
Last edited: Mar 17, 2014

Looks more like a routine proficiency flight (catching their required hours in the seat) where they pilots are just playing follow the leader and making a occasional exaggerated maneuvers to stress themselves. The distance between them is too great for instructor/student.

FreiZeitGeist said:
They are not flying holdings...

BTW: 2 Euro-Figthers nearby are common in the schooling for Eurofigther-Pilots. The Eurofigther is a one-seat-airplane, the Pilot in Practice has to learn how to fly alone - with his teacher on another Aircraft beside him. Some Eurofigthers are 2-seated for training-purpose, but in training a new pilot there will be allways the point, where the Student-Pilot have to fly on his own - controlled by his teacher beside him.
Click to expand...

pseacraft said:
Looks more like a routine proficiency flight (catching their required hours in the seat) where they pilots are just playing follow the leader and making a occasional exaggerated maneuvers to stress themselves. The distance between them is too great for instructor/student.
Click to expand...

Whether conversion training or front-line operational, fighters (and I think Eurofighters based on the image is a relatively safe assumption) operate in pairs or more as a routine - I don't think there is anything unusual or unexplainable on display here.

MikeC said:
What is "military speed"?
Click to expand...

Fast. As in not a holding speed but less than supersonic so as not to cause ground damage I would assume.

Staff member
It's also quite reminiscent of this image: 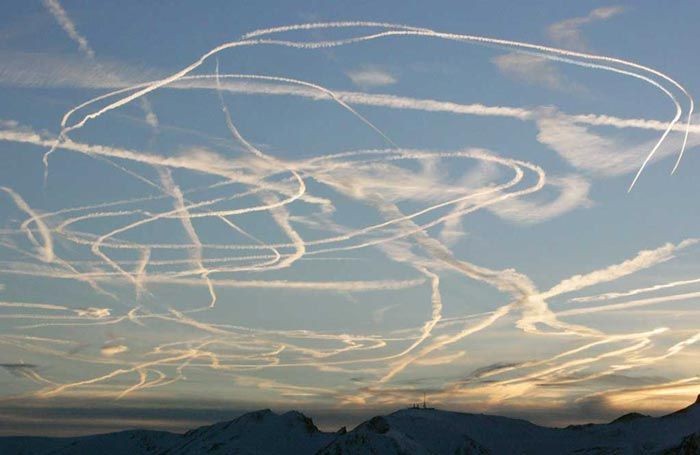 From a fighter engagement exercise in china:
https://www.metabunk.org/threads/debunked-the-these-are-chemtrails-you-stupid-zombies-image.2861/

Here again there are some paired turns that look a bit like a racetrack hold, but also a variety of other maneuvers.
Last edited: Mar 18, 2014

Staff member
Here's another video showing some Eurofighters doing basically the same thing, also in Germany. The trails are not as persistent though.

Another showing them in pairs

Related Articles
Satellite ADS-B Data in FlightAware24 - Blue Planes Prove Globe Earth
UFOs Filmed from Moving Helicopters and Planes. Not So Fast!
Flares in the Sky? [Landing Lights of Planes landing at Phoenix Airport]
Explained: Why Planes Get Dented Nosecones - It's Mostly Birds
Donald Trump initially said he thought there were "bombs" on the planes on 9/11
How Do You Take Good Photos of High Altitude Planes and Contrails?
Automated Video Tracking of Planes
Two Large Planes Flying Parallel, Chiloquin, OR. Is it Legal? Yes.
Three Planes Turn Right, South of San Francisco
911 video with edited out planes.
What might these three planes be?
Contrails from Turboprop Planes at lower than typical altitudes
Explained: Dark contrails behind bright planes
Two planes at the "Same" Altitude, only one leaves a trail
Claims Ukranian military using civilian planes as cover
Debunk this [Planes at different altitude and different contrails over France]
Racetrack Contrails and "Bizzare" Planes off the Yorkshire Coast
How could the planes wings penetrate the WTC?
Tip: Planes with "No callsign" in FlightRadar24
Reward to catch people who point lasers at planes
9/11: Any Evidence for remote controlled planes?
Debunked: US Reported In Panic After Chemtrail Planes Forced Down In India and Nigeria
A new low from Aircrap.org - Disney's Planes
No planes today
Photos of Planes and Contrails (That you took yourself)
Identifying chemtrail planes
Debunked: Chemtrail Plane and Other Unlabeled Photos from Facebook etc.
WTC: Were the planes drones, how hard is flying a 767 into a building?
"Unmarked planes"
Explained: UFOs that look like flares or fireworks [Aerobatic planes with wingtip pyrotechnics]
Advocating violence against "Chemtrail" planes, pilots, scientists, and debunkers
Crossing planes [Planes at different heights]
Debunked: media headline "Judea declares war on Germany" [boycott]
Debunked: Video of "Islamics Marching Through Berlin" [Biker Gangs]
[MoreInfoNeeded]Germany NewsTV: Explanation for radar cloud
Debunked: It was not the political goals of Hitler that brought us to war...
Odd shadow? NW-Germany, 31.5.2014 [Volumetric Contrail Shadows]
Flying Object Timelapse - Cape Hatteras Lighthouse
UFO Billboard in Montana Uses Photo of Identified Flying Object
Illusion of Contrail Asymmetry from Flying perpendicular to the Sun
Unknown flying insect or object
Sideways Flying UFO Hawk
A Plane Flying Across the Face of the Sun, with Contrails [Virgin Flight 353]
Demonstrating the curvature of the Earth by Flying in a "Straight Line" Near the Poles
Explained: Exmouth UFO Flying Saucer - Sunlit Contrail and Motion Blur
Four Engines, Flying West over Sacramento
UFO with navigation lights, Drone or aircraft? [Low Flying FedEx 777]
Explained: Why flying isn't impossible on a globe
Butterfly UFO - Things it Might Be, Like an EDF Flying Wing
Debunked: Monsanto wants to replace the bees they are killing with genetically engineered flying ant
Share:
Facebook Twitter Reddit Pinterest Tumblr WhatsApp Email Share Link