Staff member
I've been reading several papers on conspiracism recently, and a common thing they do is demonstrate a correlation (or not) between two variables. For example they might demonstrate a correlation between a person's "need for uniqueness" (as measured by answering some standard questions), and a person's Generic Conspiracy Belief score. So we get results like (Lantian 2017):

We first tested our main prediction, that people with a
higher need for uniqueness should have a higher level of
belief in conspiracy theories. In line with this hypothesis
and with our preliminary work, we found that a higher need
for uniqueness (measured by the Self-Attributed Need for
Uniqueness scale) was associated with higher belief in
conspiracy theories (measured with the Generic Conspiracist
Beliefs scale), r(206) = .17, 95% CI [.03, .30],
p = .015. The test of the quadratic effect of belief in conspiracy
theories on need for uniqueness was not significant,
t(205) < 1. The linear association was replicated with the
single-item measure of belief in conspiracies, r(206) = .18,
95%CI [.04, .30], p = .011, and the quadratic effect was still
not significant, t(205) < 1.

So my question here is how to interpret these numbers. I'm assuming r is the correlation coefficient "Pearson's r". This is a kind of "goodness of fit" measurement, which shows how closely the distribution of values fits a line through them (found via linear regression).

Sounds reasonable, however in it seems to be a measure of the quality of the correlation, and not the magnitude. Sure, it shows that people have more need for uniqueness then they are more likely to be conspiracy minded. But it does not show how much?

I suppose, now I've rubber ducked my confusion, that the magnitude is somewhat irrelevant as its automatically going to be scaled relative to other factors. Like if you've got a r=1 then that means that this is the only relevant factor. r = .13 means there are other more significant uncorrelated factors or random variation (i.e. factors that have a proportionally larger effect) because those factors would spread the y values out, and decrease r.

Now can you really go from .13 to .17 (ignoring the sign) as from "very weak link" to "associated with"? I suppose they are not that different, and written by people with different native languages, but the gist of one paper seems to be making the correlation (.17) but with the other paper they conclude there's no real correlation (.13).

Is that 2% from the r=-.13 only? Or other values from the data like p = .08? What's the math to arrive at 2% in that paper. "2% of the variation" seems more understandable than the r value, so would be a better number to use if I understood where it came from. And could you also calculate it for the other paper?

I'm having to drag up from memory the stuff I used to teach on this, and bearing in mind I haven't read the articles, but I think the key thing here is the choice of words. One article is saying there is an association, the other is specifying how good that association is.

Correlation coefficients work by taking central values of a pair of theoretically linked variables (usually the mean), calculating a standard deviation (how far each set of values deviate from the central one), and arriving at an overall number that suggests how closely those pairs follow each other. If both values increase together they form a positive correlation, and if one goes down as the other goes up there is a negative one.

By extension if the pairs follow each other then it is because the behaviour of one causes the behaviour of the other, rather than some other random factor that you hadn't considered. There is also the level of 'p' (probability that the relationship is due to chance) that you are prepared to accept as your cut off to consider.

Whether you regard that overall value as statistically significant depends largely on how many samples you took - with a large enough sample you can generate a significant value of 'r' even when that value is low and the scatterplot of values looks like a Jackson Pollock painting.

You also need to take into account the other values that the calculations throw out. In the first example there are confidence intervals of 0.03 and 0.3 for r, which means that for the sample concerned the coefficient could have been as low as 0.03 or as high as 0.3. That's quite a wide spread! What would read into that first article is that yes, in the strictest terms there is an association and one value changes consistently with another, the qualifier is missing: its weak and other factors may be causing the change.

I'm sure a proper statistician will be along to correct my fading memory of how this stuff works, and always remember the rule of thumb: correlation does not imply causation!

Mick West said:
Is that 2% from the r=-.13 only? Or other values from the data like p = .08? What's the math to arrive at 2% in that paper. "2% of the variation" seems more understandable than the r value, so would be a better number to use if I understood where it came from. And could you also calculate it for the other paper?
Click to expand...

It's probably the coefficient of determination which is simply the square of the correlation coefficient in this case. -0.13^2=0.0169, which they rounded up to 2%.

skephu said:
It's probably the coefficient of determination which is simply the square of the correlation coefficient in this case. -0.13^2=0.0169, which they rounded up to 2%.
Click to expand...

That makes sense, as the definition there is:

So would it make sense about the other paper to say "Need for uniqueness accounted for nearly 3% of the variation in conspiracy belief". (since 0.17^2 = 0.0289)

I like the little color coded diagram they have there. 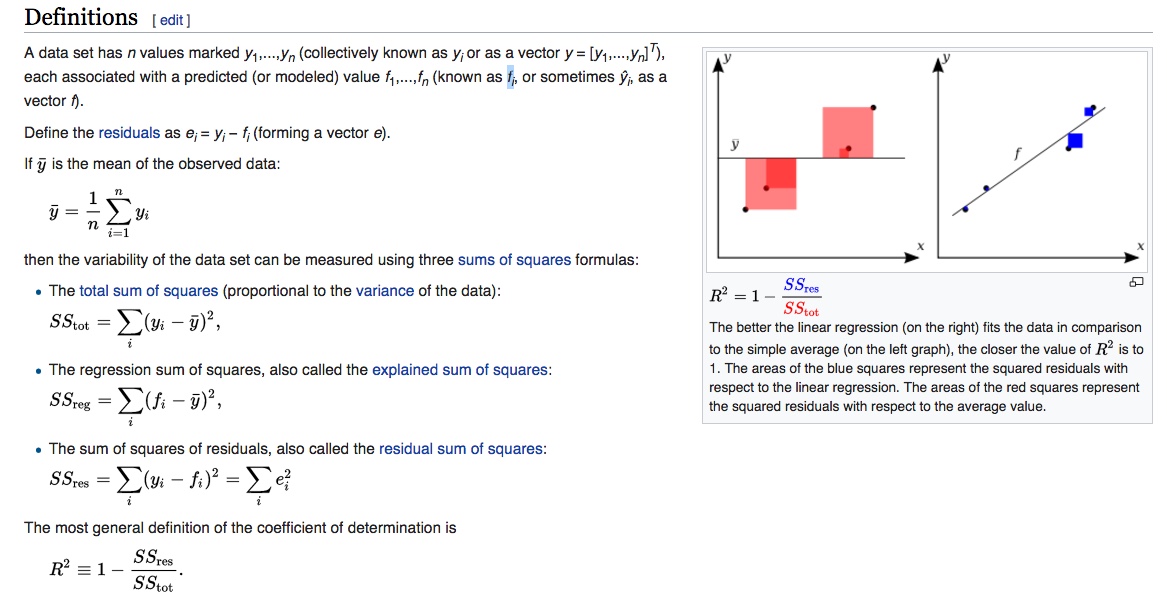 [Minor aside - using fi as they do there is vastly more readable than ŷi, which I've seen elsewhere. ]

Then there's a more formal definition of explained variation
https://en.wikipedia.org/wiki/Explained_variation


In statistics, explained variation measures the proportion to which a mathematical model accounts for the variation (dispersion) of a given data set. Often, variation is quantified as variance; then, the more specific term explained variance can be used.

The complementary part of the total variation is called unexplained or residual.

With some criticism from Christopher H. Achen:


As the fraction of "explained variance" equals the correlation coefficient R2 :https://wikimedia.org/api/rest_v1/media/math/render/svg/5ce07e278be3e058a6303de8359f8b4a4288264a, it shares all the disadvantages of the latter: it reflects not only the quality of the regression, but also the distribution of the independent (conditioning) variables.

In the words of one critic: "Thus R2 gives the 'percentage of variance explained' by the regression, an expression that, for most social scientists, is of doubtful meaning but great rhetorical value. If this number is large, the regression gives a good fit, and there is little point in searching for additional variables. Other regression equations on different data sets are said to be less satisfactory or less powerful if their R2 is lower. Nothing about R2 supports these claims". And, after constructing an example where R2 is enhanced just by jointly considering data from two different populations: "'Explained variance' explains nothing." 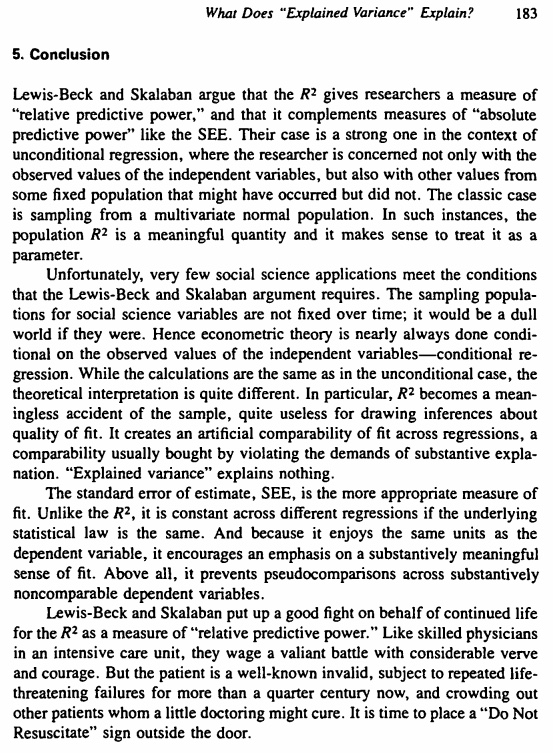 Grumble! Now this is an older article. Is R2 appropriately used by Jastrzębski? Has it been rehabilitated? Was it ever discarded as Achen wanted? What's this SEE Achen refers to, and how would it be calculated here?

Staff member
Part of the reason I'm looking at this is the IFLS headline:
http://www.iflscience.com/brain/peo...ies-just-want-to-be-unique-say-psychologists/

Which is based on the Lantian study, but the number suggest something more like:

"We are are 95% confident that somewhere between 0.09% and 9% of the reason why people who use Amazon's Mechanical Turk to supplement their income believe in conspiracy theories is somehow linked to the desire to be unique". (Lantian's Study 2)

Mick West said:
Part of the reason I'm looking at this is the IFLS headline:

"We are are 95% confident that somewhere between 0.09% and 9% of the reason why people who use Amazon's Mechanical Turk to supplement their income believe in conspiracy theories is somehow linked to the desire to be unique". (Lantian's Study 2)
Click to expand...

except your example is concrete. (assuming using Mechanical Turk is a unique thing).
The study uses primarily self assessment. And if you go in to a study as a conspiracy theorist already ( abonafide youtube head), and take a self assessment on whether you are unique or not, i would assume you would score yourself as more 'unique' and more willing to not follow the rules.

and the studies (3 and 4) where they tried to manipulate need for uniqueness, results were marginal. and


Contrary to the previous study, we increased
the number of points in this scale (from 5 to 8 points).

it sounds like what they mean by 'points' is the 1 (strongly agree) - 5 (strongly disagree). I think we all experienced from the 'where do you fall on the political spectrum' test, trying to decide between 'i somewhat agree and i mostly agree sometimes' is hard enough with 5 points.

Mick West said:
Grumble! Now this is an older article. Is R2 appropriately used by Jastrzębski? Has it been rehabilitated? Was it ever discarded as Achen wanted?
Click to expand...

I think it's still widely used despite its problems.

Mick West said:
What's this SEE Achen refers to, and how would it be calculated here?
Click to expand...

Standard error of the estimate. http://onlinestatbook.com/2/regression/accuracy.html
You must log in or register to reply here.

The meaning of "Woke", and it's origination.

Claim: R-Squared Coefficient of Determination as a Election Fraud Signal