Patrick Roddie and the Saudi princess

At the recent "Istanbul Security Conference" Patrick Roddie was able to reach and interview a Saudi princess discussing for 17 minutes or so about geoengineering:


From what she says, it is clear that she mix weather modification interventions with all the rest of chemtrailists assertions. Needless to say, Patrick Roddie is delighted. The princess also says that she was introduced to the "issue" by watching a Michael Murphy documentary (not sure which one).

On the same web page there is a link to the YT video of the full session of the "Climate Modification Technology Workshop" during the same "Security Conference". Together with Patrick Roddie you will recognize Michael Murphy chairing the "Workshop":

I almost got 10:00 in. I just couldn’t continue. Roddie’s video title, “Geoengineering: a weapon of mass destruction - Saudi Princess” is a lie and he knows it. My analysis below. My thoughts are [between square brackets]. Sorry for any typos.

0:46 - (Roddie) First of all, your Royal Highness, I was really glad to see you yesterday at the presentation we gave on geoengineering.
0:57- (Princess Basmah) Thank you

[He says “the presentation *we* gave.” He’s talking about what ever circus sideshow he was doing. The Princess did not do a geoengineering presentation.]

[Also note how she is trying to ignore him and enjoy her newspaper (image below).]

1:02 - (Roddie) My first question is, were you aware of geoengineering before yesterday and what did you think of the presentation; did you have any thoughts?

[She then shifts the towards one of her advocacy issues: The 4th Way Law (http://basmahbintsaud.com/blog/the-fourth-way/)]

2:38 - (Princess Basmah) And I think it’s one of the things like my theory The 4th Way Law (http://basmahbintsaud.com/blog/the-fourth-way/) which is new to society, hard to believe, hard to hope for, very impossible for others to perceive, that there are things in the world that get born every day. New sciences; if I can accept Twitter, I can accept geoscience. So it’s all about accepting new things, but I think there is something going traditionally up the stairs people would be able to grasp it rather than just hit them with sciences they have no knowledge of or they can’t comprehend. So it is like Newton’s theories - like so many theories in the world; it took time for people to recognize It took a lot of research, a lot of attention, and then it started taking its platform and growing up in the world. (4:07) And I think it’s the same way with geoengineering. I think it’s one of the key points of the new power in the world to understand geoengineering and how it can be used as a weapon … a mass destruction weapon without even exploding a nuclear bomb. It’s very powerful. You can control water - and without water there is no life. Without water there is no life. Without proper food, clean food, there is no life. It’s just actually a way of slow poisoning that it will get you at the end. And that the population will just disappear into minimal numbers until there is no more population of billions and it will go back to whatever it was. I think that is the question here, survival and humanity. How do we concern ourselves in maintaining humanity and life on Earth?

[she is referring to geoengineering in the hypothetical, not as a reality. She’s discussing the same geoengineering debate points that have been ongoing for half a century or more. They’re all “what ifs”.]

6:08 - (Roddie) Geoengineering is seen - *and you referred to it* - as a weapon and this is something that is being deployed against all humanity.

6:23 - (Roddie) You saw Michael Murphy’s film a year ago and you became aware of geoengineering then.

[She never said she saw or watched MJM’s “film”. She said one of her Twitter followers (most likely a MJM fan) sent it to her to “check out” a year ago (@ 2:30). Thus far in this discussion she has only referred to geoengineering in the abstract and as a segue to speak about her own interests (The 4th Way Law (http://basmahbintsaud.com/blog/the-fourth-way/) and http://basmahbintsaud.com/about-Princess Basmah/).]

6:36 - (Roddie) Do you speak to other people about this issue and how aware are people either in your circles or in Saudi Arabia about this program?

[Again, in his mind he is referring to geoengineering as an ongoing, real life “program,” while she’s talking abstract concepts.]

[Also note how she’s trying to read her newspaper (again) while he rambles. Her body language says, “go away.”]

[Next comes the bombshell question. He finally asks her if geoengineering has been deployed.]

8:45 - (Roddie) geoengineering is always couched as a proposal and it is vehemently denied by everybody in official capacity all over the world to my knowledge that it has actually been deployed. Are there any institutions that you are aware of in Saudi Arabia that are talking about the actual deployment of it as opposed to a theory?

[I don’t think he realizes what his own question reveals about his own beliefs. Asking if anybody is, “talking about the actual deployment of it as opposed to a theory?” is admitting he doesn’t know if geoengineering has been deployed while also admitting it’s only a theory.]

[I also find it interesting that he limits the scope of her answer to “institutions within Saudi Arabia.” Why not ask if she’s aware of ongoing geoengineering deployment “anywhere in the world?” His question limits her answer, which leaves him plenty of wiggle room to allege geoengineering may not be happening in Saudi Arabia, but that doesn’t mean it’s not happening somewhere else!)]

[She gives an adamant verbal and head shaking “no” to the question of “ongoing geoengineering deployment.”]

[When she says, “like i said (earlier in my answers to you), geoengineering is something that we talk about, something that is being studied and seen as an option,” this totally, and unequivocally, destroys Roddie’s earlier implication (at 6:08) that she (earlier in their conversation) referred to geoengineering as a weapon that is being deployed against all humanity. She never said such thing. In fact, as she struggled to find the right word to finish her last answer, Roddie himself jumped in with the word “option” (@ 9:28).]

[This Roddie guy knows the real scoop on geoengineering. Everything in his questions (@ 8:45) and answers (@ 9:28) demonstrates he knows the truth.] 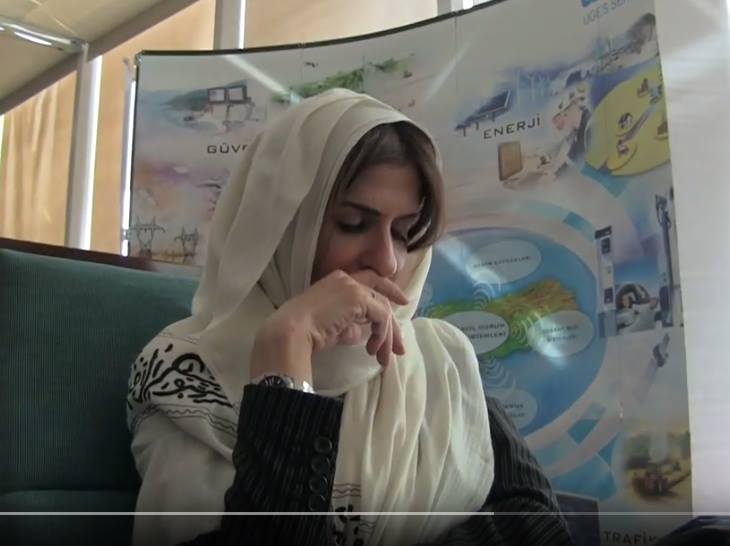 Once, while working in a shopping mall in Los Angeles (painting murals), we were told not to talk to a group of girls - Saudi princesses.
We were told they would not speak to male strangers, as it was against their religious or "moral" law.
I don't know if this was B.S. .....but it was the rule at the moment.