Staff member
Recently the airline Virgin Australia posted some photos on Facebook that had been taken by a passenger on board a flight from Perth to Adelaide: 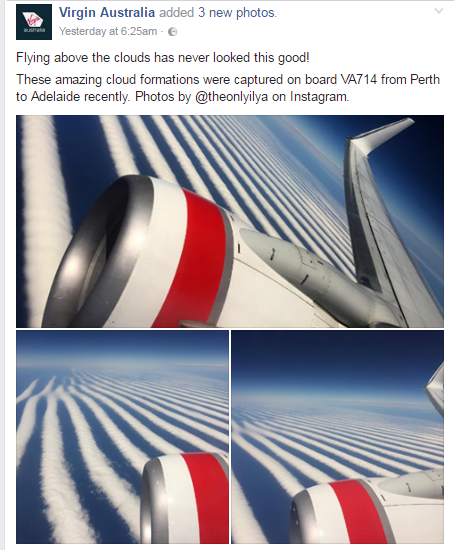 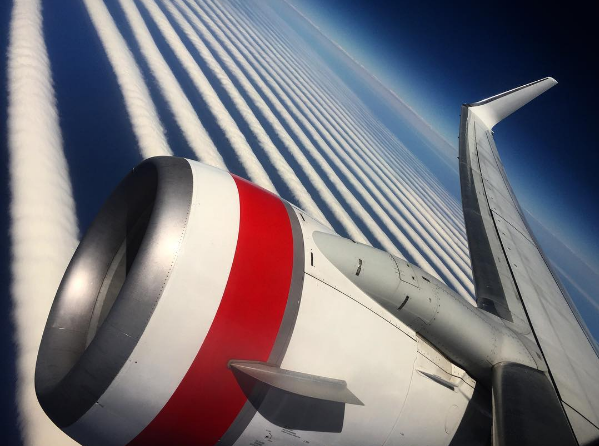 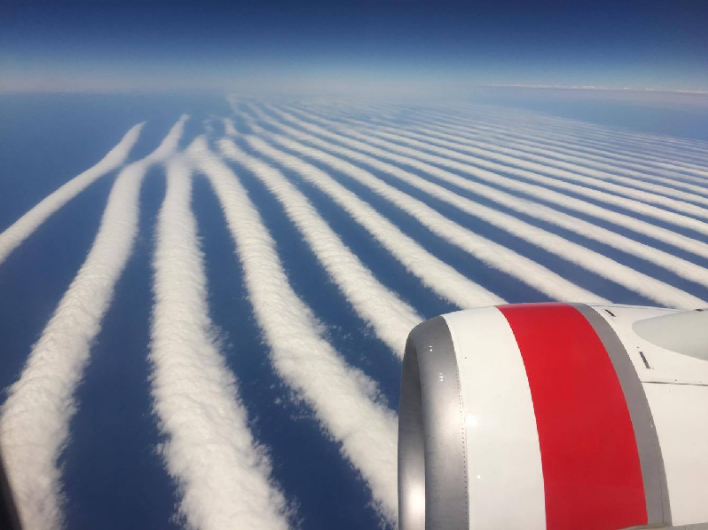 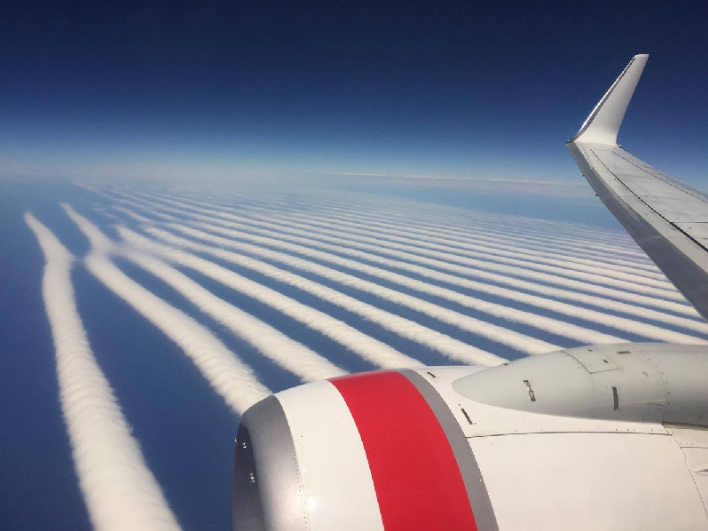 At the time of writing, the thread has almost 500 comments, many of them as a result of the post being shared on chemtrail groups, with claims that the clouds are somehow artificial or linked to spraying from aircraft.

In fact, the clouds are a natural formation.

We can find them on satellite images:

The pictures were first posted on Instagram on January 6 by Ilya Katsman (@theonlyilya), here: Source: https://www.instagram.com/p/BO6VNmEDrcy/?taken-by=theonlyilya

Fortunately, Australia is in the field of view of the Japanese weather satellite Himawari-8, which posts high-resolution full-colour images every 10 minutes, at http://himawari8.nict.go.jp/

Looking at the satellite imagery for January 6 quickly shows an area of linear clouds off the south coast of Australia: 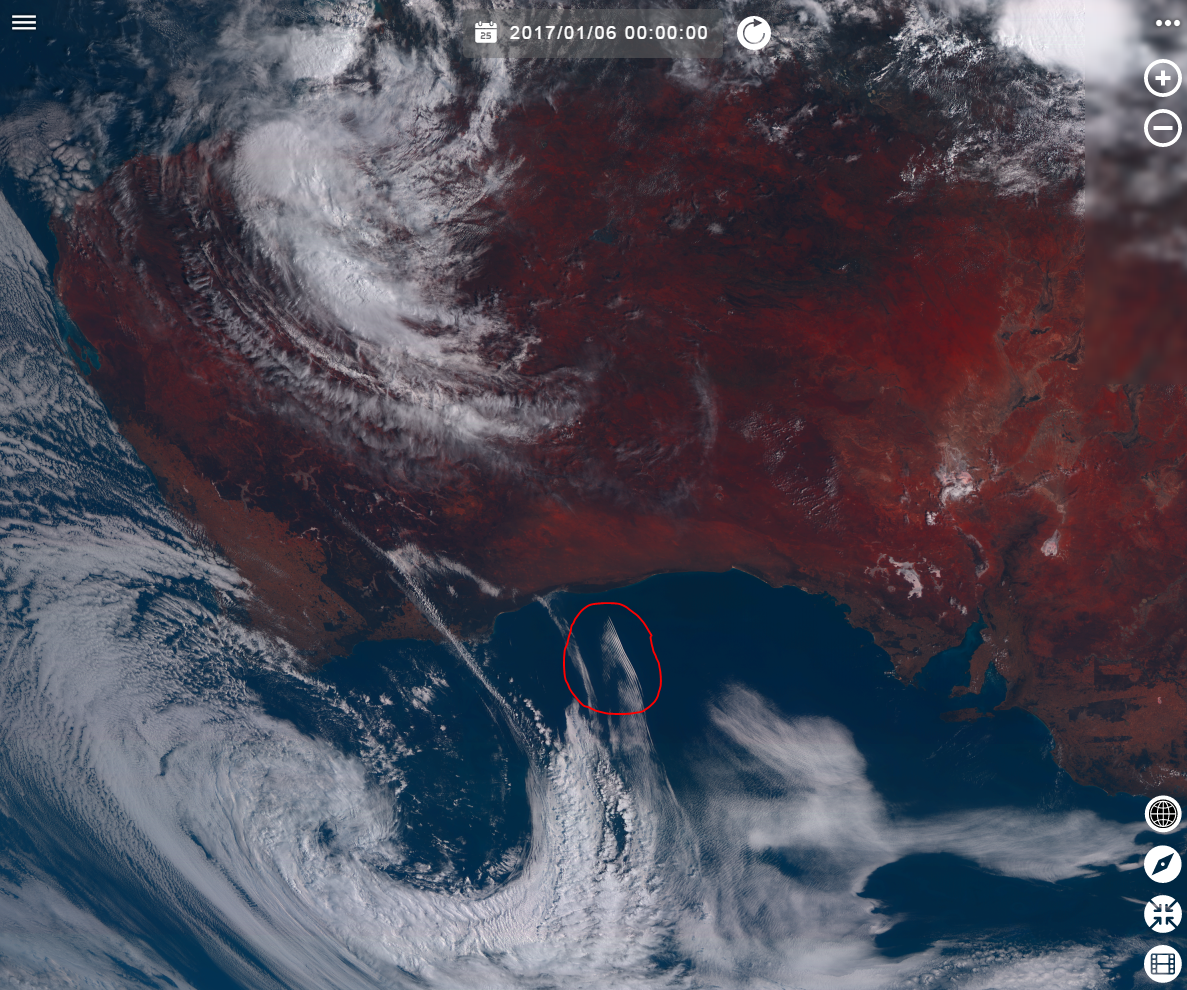 Using FlightRadar24, we can see that the Virgin Australia flight, VA714, crossed the area of the clouds at about 2:00 UTC (10am Perth time): 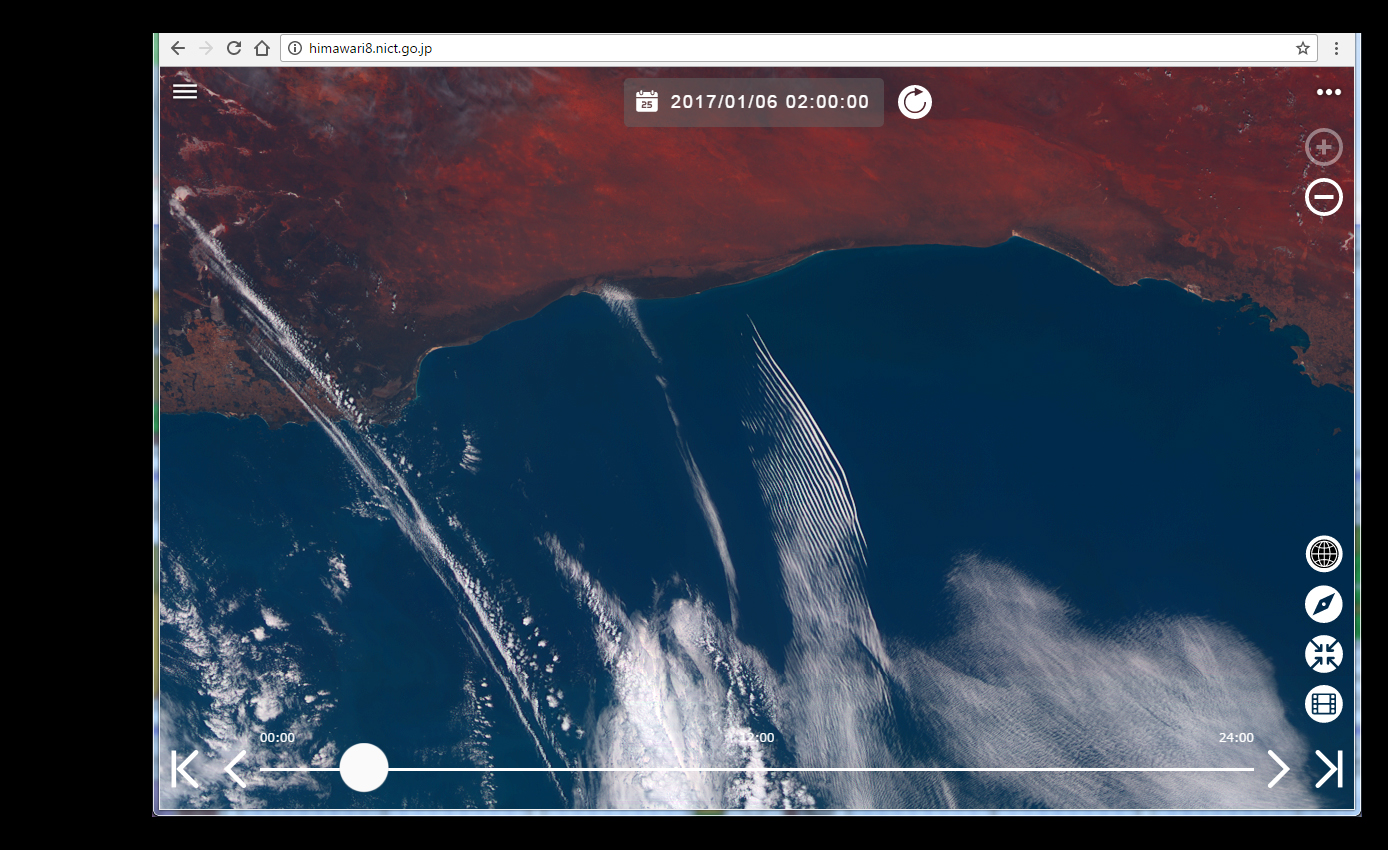 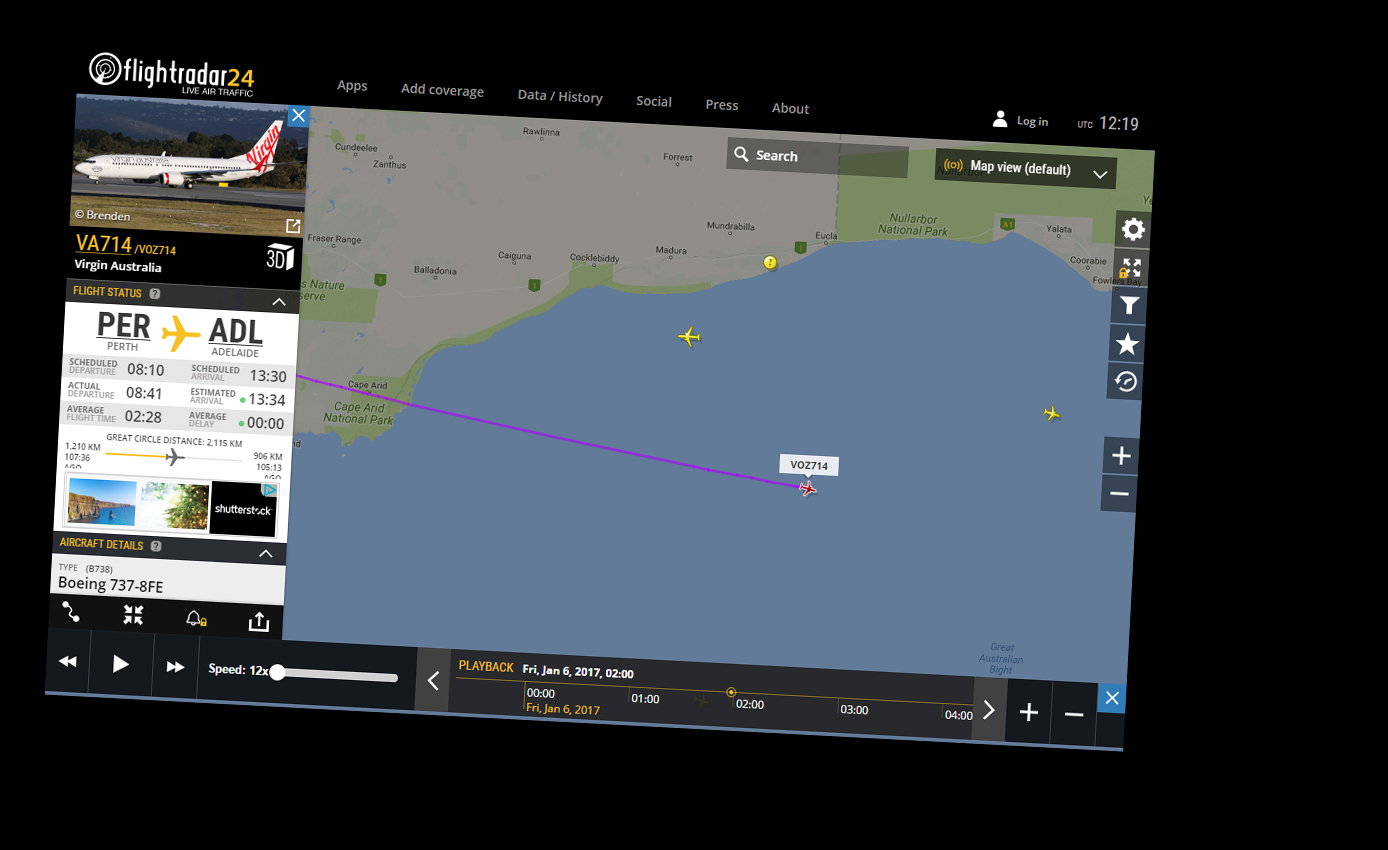 Overlaying a crop from the satellite image onto the photo from the plane, and adjusting for perspective, gives a good match, showing where the waves intersect in a Y shape on the eastern side of the formation:

The clouds are in fact a well-known phenomenon called the "morning glory", where a series of "roll clouds" form due to standing waves of wind in the atmosphere. Wikipedia describes the most well-knowm occurrence, which forms on a regular basis in the north of Australia:


The air descending from the peninsula to the east goes underneath the inversion layer and this generates a series of waves or rolling cylinders which travel across the gulf. These cylinders of air roll along the underside of the inversion layer, so that the air rises at the front of the wave and sinks at the rear. In the early morning, the air is saturated enough so that the rising air in the front produces a cloud, which forms the leading edge of the cylinder, and evaporates in the back, hence forming the Morning Glory cloud. The cloud lasts until the surface inversion disappears with the heating of the day.

The geography here is slightly different but the result is the same: sharply defined parallel bands of cloud forming in the morning.
Last edited: Jan 10, 2017

Staff member
This animated GIF from the Himawari satellite data shows the evolution of the clouds, from just before sunrise (2040UTC = 0440 Perth time) to early afternoon (0500UTC = 1300 Perth time), at 20-minute intervals. (The 0240 frame is missing from the satellite data.)

I think these are gravity waves, very similar to those shown in this article: 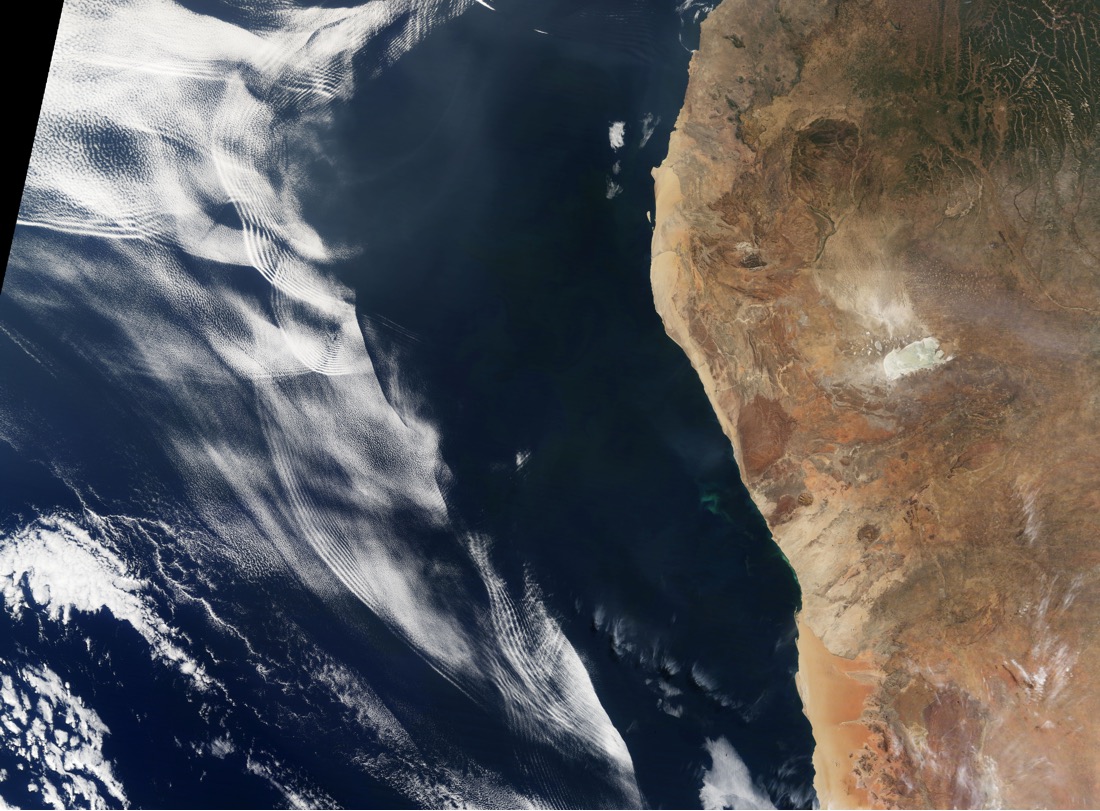 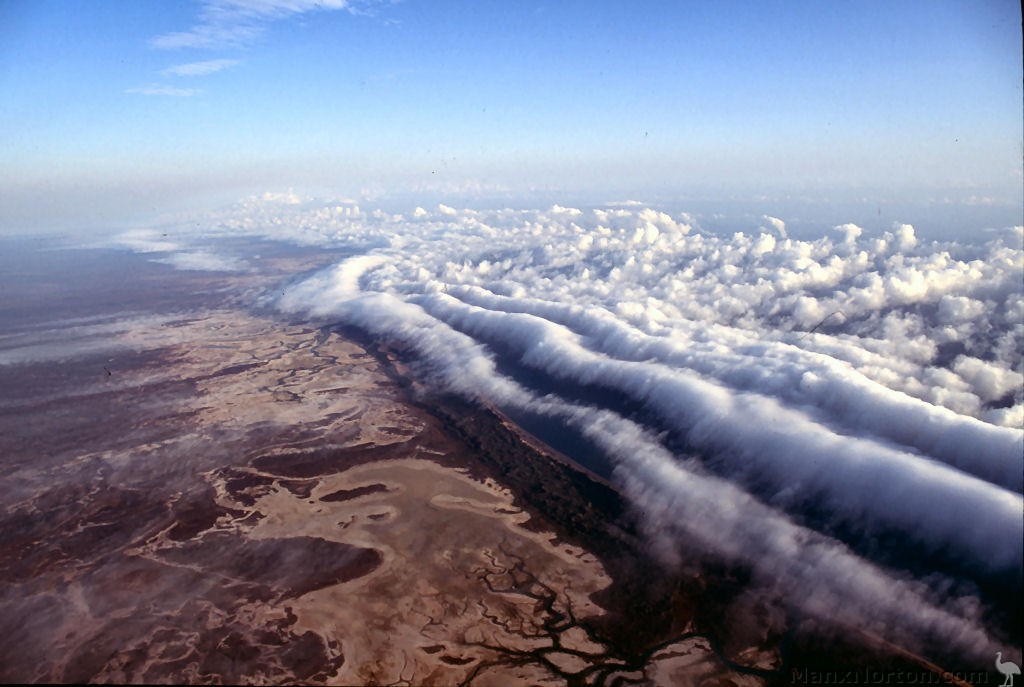 Staff member
You may be right. But are they actually really much different? Both form from waves in the atmosphere which cause condensation on the "peaks" and evaporation in the "troughs".

They look very much like images of the morning glory clouds in the Gulf of Carpentaria: 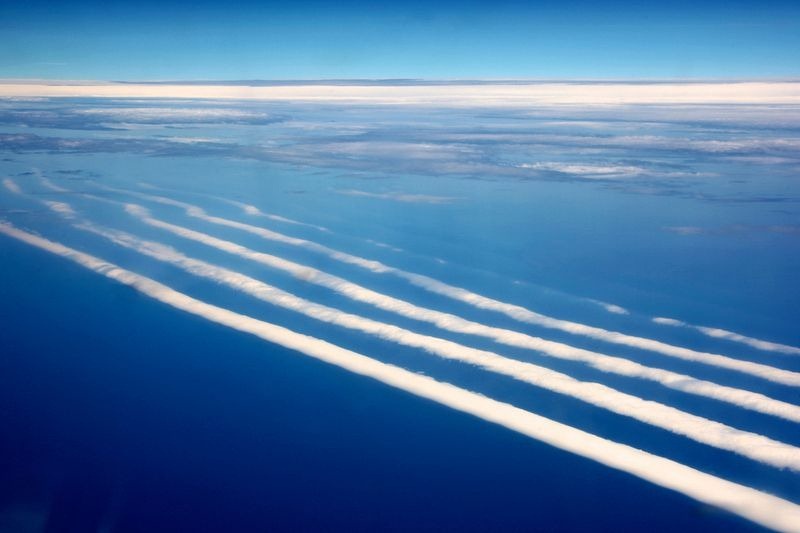 It's hard to tell how high the clouds in the Virgin pics are.

“Wave clouds can form anywhere on the continent but they are only called the Morning Glory when they form across the Gulf of Carpentaria, Neil Bennett, a Western Australian spokesman for the Bureau of Meteorology told news.com.au.

Trailblazer said:
This animated GIF from the Himawari satellite data shows the evolution of the clouds, from just before sunrise (2040UTC = 0440 Perth time) to early afternoon (0500UTC = 1300 Perth time), at 20-minute intervals. (The 0240 frame is missing from the satellite data.)

Interesting to see the mass of cloud moving in the opposite direction. Looks like it might be cirrus so at a higher altitude.

These are from the same cold front, but taken off the coast as we arrived into Sydney yesterday. 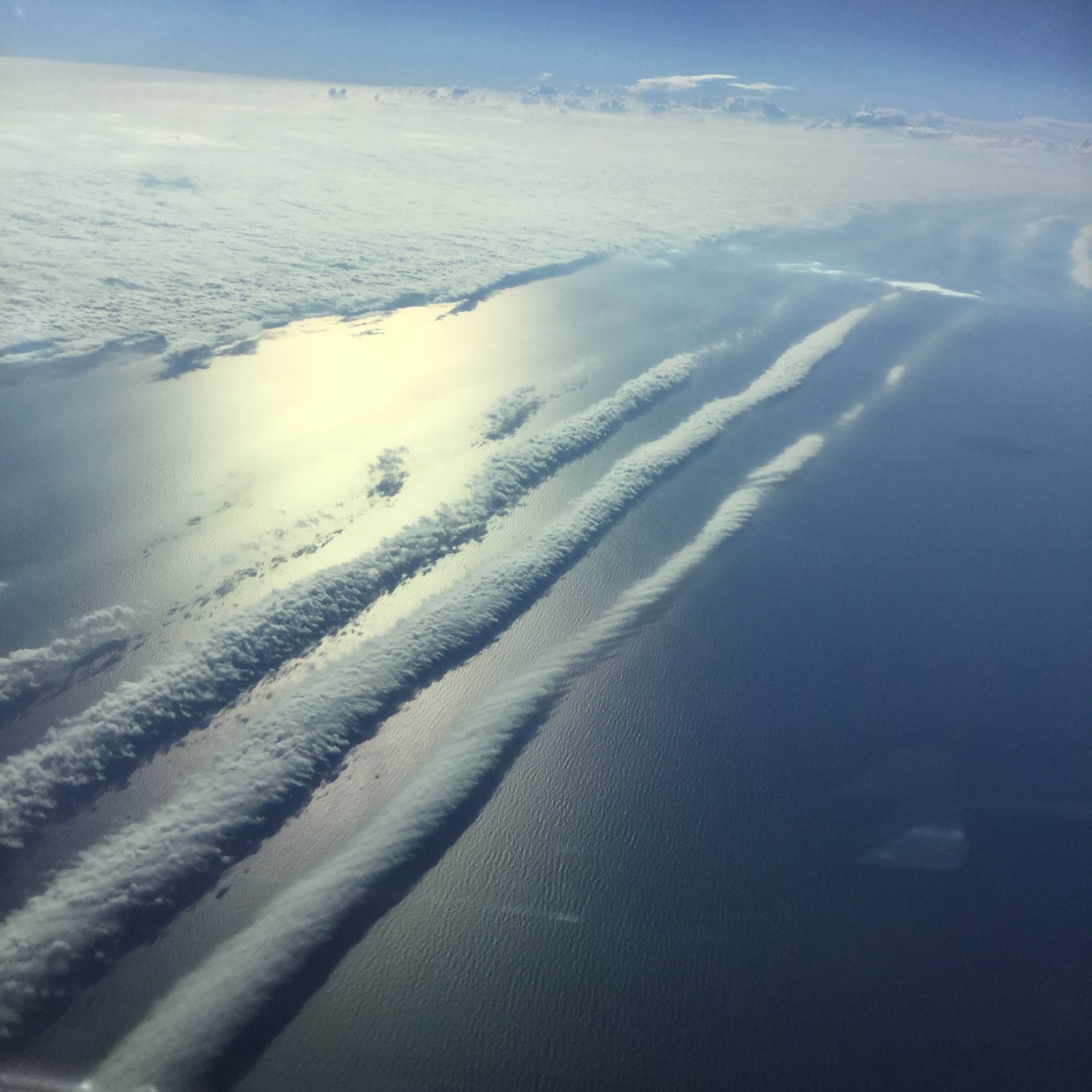 As explained above, these clouds are caused by gravity waves - also known as undular bores. Since they occurred over the Great Australian Bight, they technically wouldn't be considered "Morning Glory" clouds, as this name is reserved for the phenomenon over the Gulf of Carpentaria in the north of Australia. However, the triggering mechanism is essentially the same. Cold, low level air impacts a stable layer and triggers the waves, like a pebble thrown into a pond. This can result from the cold pools generated by thunderstorms, nocturnal (cold) land breezes, or by cold fronts (which was the case in the above) - when the advancing wedge of denser, cold air forces air ahead of it upward. If the perturbed air is in an unstable environment, it will continue to rise; if it is stable (as is common at night, and as occurred above), it will experience restorative forces that work to bring the displaced air parcels back to their original levels. The restoring force is, of course, gravity - hence the name - and trains of waves can occur as a result. Clouds form on the crests of the waves if there is sufficient moisture in the air, when water vapour cools and condenses into cloud matter (appearing laminar with forced ascent, as the above clouds do), and evaporates in the subsiding air comprising the troughs, leading to clear air in between the clouds.

Attached is the surface analysis valid near the time the clouds were observed. The cold front responsible for triggering the gravity waves can be seen tracking east along the south coast of Western Australia.

And here is an IR (infrared) satellite image from around the same time as the above analysis. (Not as impressive as the Himawari image above, but it still helps paint an overall picture). 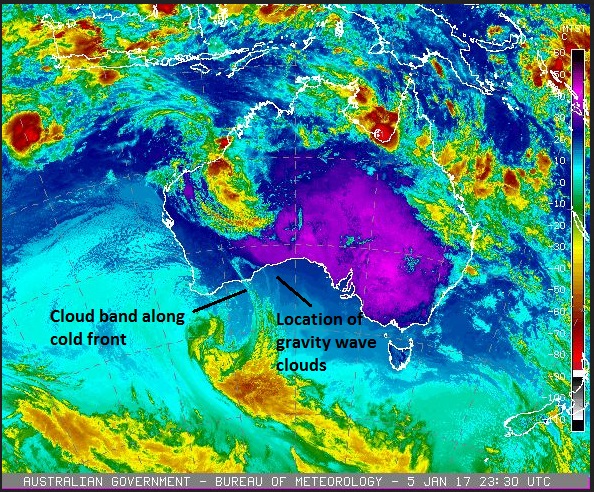