Dane Wigington Illustrates this article with a photo that came originally from the facebook page of one Daniel Antonio
http://www.geoengineeringwatch.org/climate-engineering-omnicide-and-the-criminals-who-help-hide-it/ 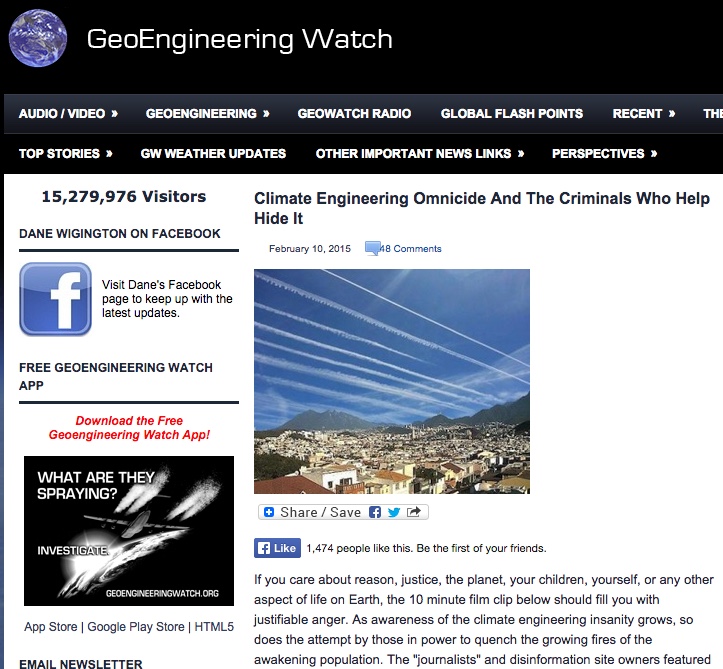 Antonio admits here that it is "edited" with a different sky. I have seen the same photo on Madisonstar Moon's page and Rogue Valley, Oregon Geoengineering Awareness. The latter group at least had the decency to take it down.

It's a confusing mix of points. Apparently new engines don't make contrails, but then neither do old engines unless you add water? So was there some kind of sweet spot in the 60s to the 1990s when there were lots of contrails? If contrails started after WWII, and stopped in the 1990s, then why don't chemtrail believers remember them?

He didn't read that far obviously. Water injection on large aircraft, B17, B52, BAC111, B747 was only used for take-off. Some fighters in WW2 had a small water-methanol reserve for emergency situations which they would use in a dog fight, but that was it.

How much water would a bomber need to carry to make the observed contrails? I dont know much about aviation but I recall been told a Harrier carried someting like 150lt of water which would be used in a couple of minutes hover time. One would think a B17 would need a phenomenal amount to make contrails. Mind you how do we know that the bombers really carried bombs? WW2 could have been staged.

David Fraser said:
WW2 could have been staged.
Click to expand...

oooo I had a heated online debate with a CT about that recently. Apparently it was all the Rothchilds, backing both sides (including the soviets) in order to profit from the post war boom and to cull the world population. And they orchestrated the holocaust, using Hitler as a scape-goat, (Germany was set up as the fall guys right from the off) in order to purify the Jewish population so only true Zionists would be left.

When I tried to point out the flaws in that logic I was told that 'was what I had been programmed to think' by the Zionist Illuminati historians.

(sorry if this is off topic)

WWII was staged. Of course it was. They had "bombers" flying around with chemtrail material (that they didn't think up until 1996 with the "Weather as a force multiplier" document, and therefore they then had to secretly plant the bombs in random houses etc to make it appear the planes dropped them.
You think the people still alive today who remember living through the war and fighting in it are proof this didn't happen? Well think again, cos they are all now in their 70's to 100's and clearly just have Alzhemiers due to all the spraying so they just believe the "official" story that has been parroted for so long.
Of course you think that if patents and suggestions of Geoengineering are decades newer than the "persistent contrails" prove chemtrails wrong you are overlooking something. This is in fact clearly proof that they have managed to invent a time machine so as to travel back in the past and start geo-engineering BEFORE it's too late.

See how easy that was to make up and pull completely out my backside? There is no end to the inventiveness you can have to keep believing something despite all your evidence being debunked.

That is why so many places putting forward these hypotheses do not ever like to look at the maths. It;s easy to come up with a plausible sounding explanation to explain away a debunking, such as water injection, but if you actually bother to do the maths, it shows that totally doesn't work.

Just like doing the maths shows that a modern aircraft with great lifting capacity cannot produce enough material to lay the trail you see (as most of the water is in the atmosphere) the maths would show very easily that a water injection system on a bomber could in no way make the trails shown in WWII, from dogfighting fighters over Britain or squadrons of B17s on the way to Germany.

Steve Funk said:
Farther down in the article Dane is apparently attempting to debunk the Memphis Belle video on the basis that the B17 used a water injection system. This is a non-sequitur.
Click to expand...

As already pointed out in comments above...water-methonal (mixed together) injection methods were used primarily for HEAVY bombers during the take-off phase....NOT in cruise flight, at any time!

WATER alone weighs about 7.5 pounds PER gallon!! It would be a "payload" liability during cruise flight....ONLY reason to use it(**), with the methanol, would be as a "coolant" during take-off....to allow those big engines to produce "EXTRA" thrust, at the low airspeed velocities of a normal takeoff...AND at the ambient temperatures that existed.

(**) Adding....reason to even have it on-board at all was for the take-off phase!! After take-off, it is just "dead weight"....use it or lose it would have been a "mantra" for those pilots, back then. THEY needed to carry ordinance....weapons....to drop on the enemy. Not "water".