Here's a piece from 2012 which made it into print, based on the work of Russell Blaylock M.D -


In the Las Vegas Tribune report, the U.S. Air Force on their website called chemtrails a “chemtrail hoax,” but “scientists working at Wright Patterson Air Force Base confirmed to the Ohio newspaper, Columbus Alive, that they were involved in aerial spraying experiments. One involved aluminum oxide spraying related to global warming and the other involved barium stearate and had to do with high-tech military communications.”


Individuals who have noticed health problems, die-off of livestock or crops concurrently with the appearance of chemtrails have investigated on their own, having their blood, soil, water, and atmosphere tests made to compare with the norms. A compendium of these reports both documented and anecdotal is on Strange Days Strange Skies online.


What in God's name any journalist would want to link to the website in the excerpt above, I do not know.


The documentary film What in the World Are They Spraying? produced by G. Edward Griffin, Michael Murphy, and Paul Wittenberger shows the impact on the environment of chemtrails. For instance, the snow on Mount Shasta normally has 7 parts per billion (ppb) of aluminum, but over the last four or five years it has increased to 61,000 ppb.

Soil in northern California is turning alkaline, disrupting the root systems of trees. Farmers have noted that some plants will no longer grow in Hawaii. Fishermen see fewer bugs for the fish. These are a few examples from the above documentary.


What in the World are they Spraying Debunked here

These are just some of the claims in the article, which is an authoritative repetition of all the chemtrails bunk, and references many of the more popular and seemingly credible sources. 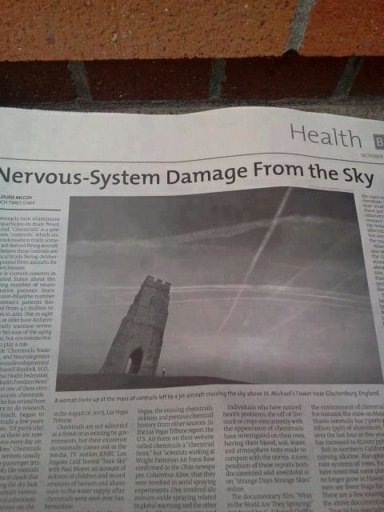 Staff member
The Epoch Times is the publication of the Chinese Falun Gong spiritual movement. They are rather eccentric.

My video class teacher showed me that issue and thought it was serious. But then, he also liked my video on snow samples. There are a lot of people out there ready to be convincede by this stuff.

Staff member
Being in a traditional newspaper like that gives it the sheen of believability. People have pretty much got used to the idea that information on the internet is not always entirely reliable, but the newspaper, ​well, then it has to be real. Especially one with large pages.

I pulled the picture from the 'attending comments' of the Facebook group for the London CT protest in April.
You must log in or register to reply here.

May 29, 2022
WhistlingWinds
W
T
Need Debunking: Sayyid Qutb was a Liason for the Communist International