Staff member
A video is (still) doing the rounds claiming that Barack Obama "slipped up" and referred to his wife as "Michael" in a televised speech:


This was a speech given on September 30 2011 on the retirement of Admiral Mike Mullen, chairman of the Joint Chiefs of Staff. The full video is available on C-Span at https://www.c-span.org/video/?301836-1/admiral-mike-mullen-retirement-ceremony (clip is at 43:50).

The text of the speech on the White House archive site shows that "Michael" was not a slip of the tongue:


THE PRESIDENT: Thank you very much. (Applause.) Secretary Panetta, thank you for your introduction and for your extraordinary leadership. Members of Congress, Vice President Biden, members of the Joint Chiefs, service secretaries, distinguished guests, and men and women of the finest military in the world.

Most of all, Admiral Mullen, Deborah, Michael, and I also want to also acknowledge your son Jack, who’s deployed today. All of you have performed extraordinary service to our country.

However, note the comma after "Michael". Obama did slip up, not in the name but in the phrasing. "Michael" here refers to Mullen's son. He is addressing the admiral's family, one by one, including his wife, Deborah, and their other son, John ("Jack"), who was not present at the ceremony because he was away on service. 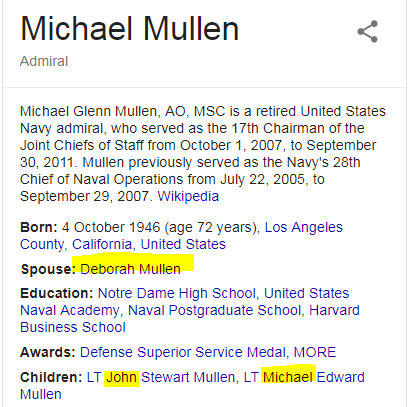 When reading the speech, Obama missed the comma and failed to parse the sentence correctly, making it sound like:

"Admiral Mullen, Deborah, *Michael and I* also want to acknowledge your son Jack, who's deployed today."

rather than the correct:

"Admiral Mullen, Deborah, Michael — and I also want to acknowledge your son Jack, who's deployed today."

The incorrect phrasing makes it sound as if Obama is telling Mullen Sr that he (Obama) and Mullen's son want to acknowledge Mullen's other son, rather than what was intended by the speechwriter: Obama is acknowledging each of Mullen's family individually.

You can hear Obama hesitate as he realises that what he's just said wasn't quite right, but he carries on anyway. A nice example of why punctuation matters. If the speechwriter had used a dash rather than a comma, another conspiracy theory would have had less fuel.
You must log in or register to reply here.
Share:
Facebook Twitter Reddit Pinterest Tumblr WhatsApp Email Share Link