Staff member
This story on CBS:
http://sacramento.cbslocal.com/2012/12/30/man-captures-video-of-strange-explosion-in-the-sky/
​
Has a very low resolution video (made with an iPhone though a telescope) that shows what seems to be a bright object with another small object moving across the field of view. The video then cuts and returns with an image showing the bright object replace by a static field of debris. 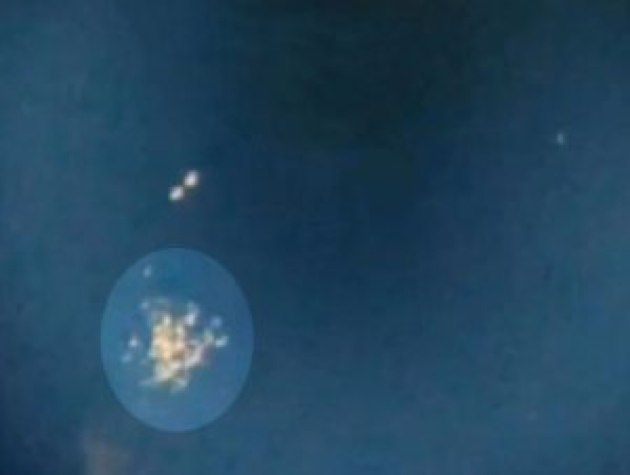 The claim is made this is an "Explosion in space".

We can tell it's not in space simply because the debris is not moving. If something explodes in space, then it keeps going as there is nothing to stop the debris moving. Here we can tell that whatever exploded was A) in the atmosphere, and B) quite light, so it stopped moving quickly.

But we don't need to look very far to see what this is. It looks exactly like an exploding weather balloon. Weather ballons are released every day, they have an instrument package attached to them that swings around. When they get very high, the low pressure caused the balloon to explode in a clouds of balloon shreds. It happens every day, and sometimes people get it on video.


Here's a frame from the video below: 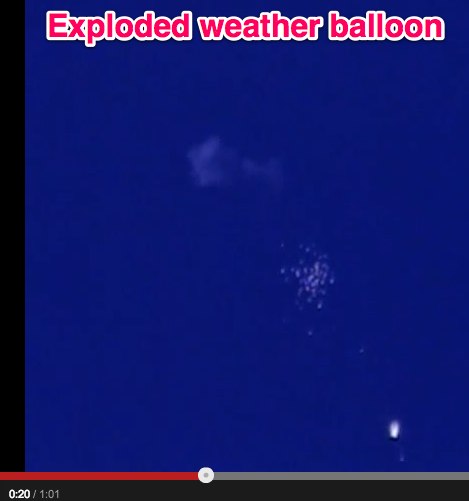 And a similar video
​


Here's a cool video of a weather balloon rising and exploding from the perspective of the instrument package.
​
Last edited: Nov 20, 2013
U

lol .. yeah right! you can debunk so much better than this..

we all know it was swamp gas.

Unregistered said:
lol .. yeah right! you can debunk so much better than this..

we all know it was swamp gas.
Click to expand...

Yes, it's quite amusing that it turned out to be one of the things that UFO enthusiasts keep accusing the Powers That Be of using to cover up UFO sightings. However "weather balloon" is a cliche for a reason - weather balloons are released twice a day from many locations across the US. So people often see them, and can't tell what they are, hence UFO. You can't say exactly, but I imagine a significant percentage of UFO reports actually ARE weather balloons. This one certainly appears to look exactly like an exploding weather balloon.

Seeing them explode is not something you see every day. But a comparison of the videos above makes it pretty clear that's what this is. Simple physics tells you it's not in space.

Originally posted by Pauligirl
Got another email

I reviewed the video. It is very likely a weather balloon that burst.
The small dot "orbiting" the balloon was the radiosonde that was
attached below it with about 70 to 100 feet *of string.

The weather balloon was likely released by the National Weather
Service (NWS) upper air station in Oakland, California, at about 3:00
PM local time.

Here is a video of a NWS weather balloon burst taken by a NWS
meteorologist through a telescope:

To capture this video, I used a 114mm Meade newtonian reflector telescope (F=910mm) with a 25mm eyepiece, 2x Barlow lense, and a Sony Handicam (model DCR-SR40). I simply pressed the camera up to the eyepiece and held it in place with plastic tie straps.

I also used a trajectory forecast from the University of Wyoming to estimate the burst location.

You will need to determine the location of the balloon release for the calculator (most likely your local NWS office). Here is a site with more information.

You can load this flight profile into Google Earth. Just remember that the balloons are actually released one hour before the sounding time. So the 00z flight is released at 23z and the 12z flight at 11z.