My search for any discussion of this comes up empty -- if it exists and I missed it, appologies and please delete/move/etc as needed

Not sure if there is a lot to discuss yet. Though I vote for "Mick West Testifies to Congress to Prepare them the Understand a Lot of Things."
https://www.cnn.com/2021/01/10/us/ufo-report-emergency-relief-bill-trnd/index.html


When President Donald Trump signed the $2.3 trillion coronavirus relief and government funding bill into law in December, so began the 180-day countdown for US intelligence agencies to tell Congress what they know about UFOs.
No, really.
The director of National Intelligence and the secretary of defense have a little less than six months now to provide the congressional intelligence and armed services committees with an unclassified report about "unidentified aerial phenomena."
It's a stipulation that was tucked into the "committee comment" section of the Intelligence Authorization Act for Fiscal Year 2021, which was contained in the massive spending bill. 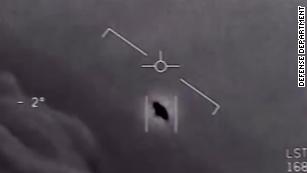 Pentagon to launch task force to investigate UFO sightings
That report must contain detailed analyses of UFO data and intelligence collected by the Office of Naval Intelligence, the Unidentified Aerial Phenomena Task Force and the FBI, according to the Senate intelligence committee's directive.
It should also describe in detail "an interagency process for ensuring timely data collection and centralized analysis of all unidentified aerial phenomena reporting for the Federal Government" and designate an official responsible for that process.
Finally, the report should identify any potential national security threats posed by UFOs and assess whether any of the nation's adversaries could be behind such activity, the committee said.
The submitted report should be unclassified, the committee said, though it can contain a classified annex.
A spokesperson for the Office of the Director of National Intelligence confirmed the news to the fact-checking website Snopes.

Why does the COVID bill mandate it though, there doesn't appear to be a correlation.

We mentioned it before, but those posts should probably be moved here.
https://www.metabunk.org/threads/what-does-off-world-mean-to-the-us-military.11343/post-243710 and the following.
Last edited: Jan 10, 2021

ParanoidSkeptic2 said:
Why does the COVID bill mandate it though, there doesn't appear to be a correlation.
Click to expand...

Sausages and laws, don't ask what goes into them.

It's part of the "INTELLIGENCE AUTHORIZATION ACT FOR FISCAL YEAR 2021", and apparently that got bundled up with the Covid bill to get a majority? Sort of like, 'if your people get money, my people get money, too'.

Washington, D.C. — Senate Select Committee on Intelligence Acting Chairman Marco Rubio (R-FL) and Vice Chairman Mark Warner (D-VA) applauded the upcoming passage of the Intelligence Authorization Act for Fiscal Year 2021 (IAA) as part of the bipartisan, targeted COVID-19 relief package. The bill, which was approved by the Committee on a bipartisan 14 - 1 vote on June 8, 2020 and passed the Senate on July 23, 2020 as part of the Fiscal Year (FY) 2021 National Defense Authorization Act, authorizes funding, provides legal authorities, and enhances Congressional oversight for the U.S. Intelligence Community.

Mendel said:
It's part of the "INTELLIGENCE AUTHORIZATION ACT FOR FISCAL YEAR 2021", and apparently that got bundled up with the Covid bill to get a majority? Sort of like, 'if your people get money, my people get money, too'.
Click to expand...

Also, here is the part of the request that deals with UFOs/UAPs

What I don't understand is why is this being reported now? This looks like old news.
You must log in or register to reply here.