they arent anti vaxxed, they are vaxxed just not boosted.

unsupported speculation of the insulting "young people these days" kind, contradicted by your own anecdote

in Germany and the UK, you're obliged to report positive self-tests

if you have a job ("young & healthy"), I think it's unlikely you'd keep it secret

Mendel said:
unsupported speculation of the insulting "young people these days" kind, contradicted by your own anecdote

in Germany and the UK, you're obliged to report positive self-tests

if you have a job ("young & healthy"), I think it's unlikely you'd keep it secret
Click to expand...

But in Estonia, you can have a free anonymous test come back almost instantly as very positive, and then just go back home and live your life as you were (namely self-isolating, as we suspected we'd had it anyway, but wanted to make sure before committing to or cancelling a get-together), not on any record that could be used statistically (as I could visit any number of the facilities any number of times, and accumulate any number of results, whilst being but a single case (or a single non-case, depending on when I chose to waste everyone's time and test kits)).

Our privacy-lobby is very powerful. Anything that was considered a possible impediment to people getting tested was removed. Of course, you then have to rely on everyone being properly socialised and both using this facility and knowing how to behave on receipt of a positive, which was far from the case. This just means we gave all the demographic segments the ability prove how responsible they were, and entirely predictable demographics failed.

Agreed. The booster was first recommended and first available for senior citizens and those with underlying medical conditions that make them more vulnerable. It seems possible that a lot of younger people heard that initial message and said "OK, then I don't need a booster." Nevertheless, the reported difference between boosted and not boosted is small compared with the unvaccinated.

as opposed to YOUR unsupported speculation?


Mendel said:
of the insulting "young people these days" kind
Click to expand...


Mendel said:
contradicted by your own anecdote
Click to expand...

sorry for being balanced.


Mendel said:
in Germany and the UK
Click to expand...

the article is about New York City


Mendel said:
if you have a job ("young & healthy"), I think it's unlikely you'd keep it secret
Click to expand...

really? somewhere in this thread is an article about unsalaried people going to work sick because they don't get sick pay.

Two-thirds of service workers surveyed in the months leading up to the Omicron surge said they did not stay home when they were feeling sick and went to work ill. The numbers highlight the precarious situation for workers without sick leave, Harknett said. They also show the pressure of chronic short staffing, threats from bosses and the possibility of losing pay that also causes people to keep going to work, she said.

as far as MY alleged speculation:

Am I required to report a positive result to local health authorities?

No, says the Centers for Disease Control and Prevention, but the federal agency recommends that people isolate and inform their health-care providers.
...

But a newly released national survey of nearly 11,000 people finds that 31% of those who tested positive at home for the virus that causes COVID-19 did not follow up with a more accurate polymerase chain reaction (PCR) test at their doctor’s office or a testing facility, and thus are likely not captured in official data.

...
Their use is particularly frequent with people 18 to 24 years old, city dwellers, Democrats, and the well-educated, the Northeastern study found.

Researchers surmise that younger people just don’t go to the doctor as much and are more inclined to favor home tests. Higher usage among young adults also could be traced to the possibility that the coronavirus has been spreading more among younger people, or that they’re more likely to be exposed to it.

“In general younger people are engaging in more interactive behaviors, and they are at lower risk of dying if they get sick, but they are at higher risk of getting sick,” Lazer says.

i'll "contradict" myself again for balance (vs cherry picking data that supports my personal opinions):

New York City now has the data to exemplify this: While 77 percent of all city residents have received either the single-dose Johnson & Johnson shot or two doses of the mRNA vaccines made by Pfizer-BioNTech and Moderna, only about 36 percent had received a booster shot as of Friday.

Mendel said:
Presumably, the case rate paradoxon is because people more likely to be exposed are quicker to get boosted.
Click to expand...

It may also be that folks with a second booster feel safer against severe symptoms and so tolerate greater risk of infection as they go about their lives?

Current report from down under

Australia has passed the grim milestone of 10,000 COVID-19 deaths since the pandemic began.

Wow! Those are daily deaths. Seems Australia are late comers to this "party".

Can anyone explain what is going on with Australia? 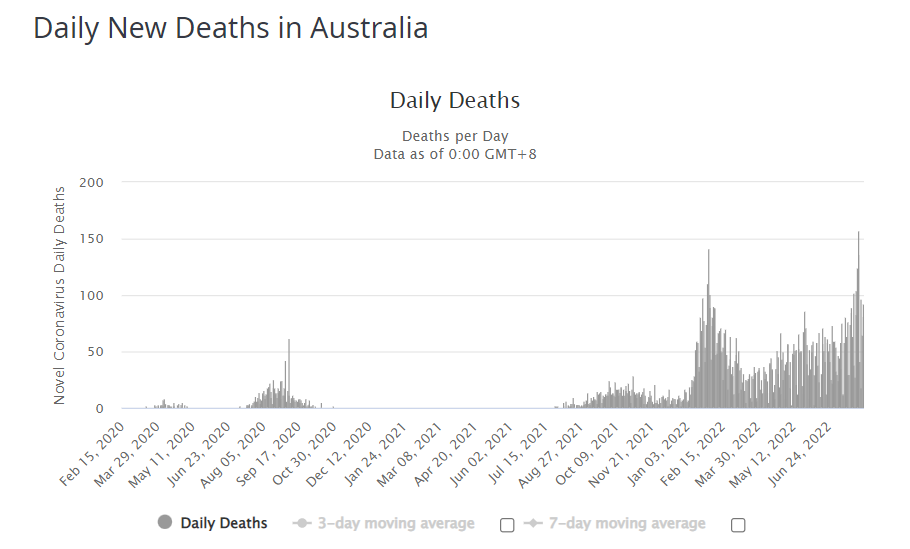 qed said:
Can anyone explain what is going on with Australia?
Click to expand...

they're doing well compared to other countries in winter 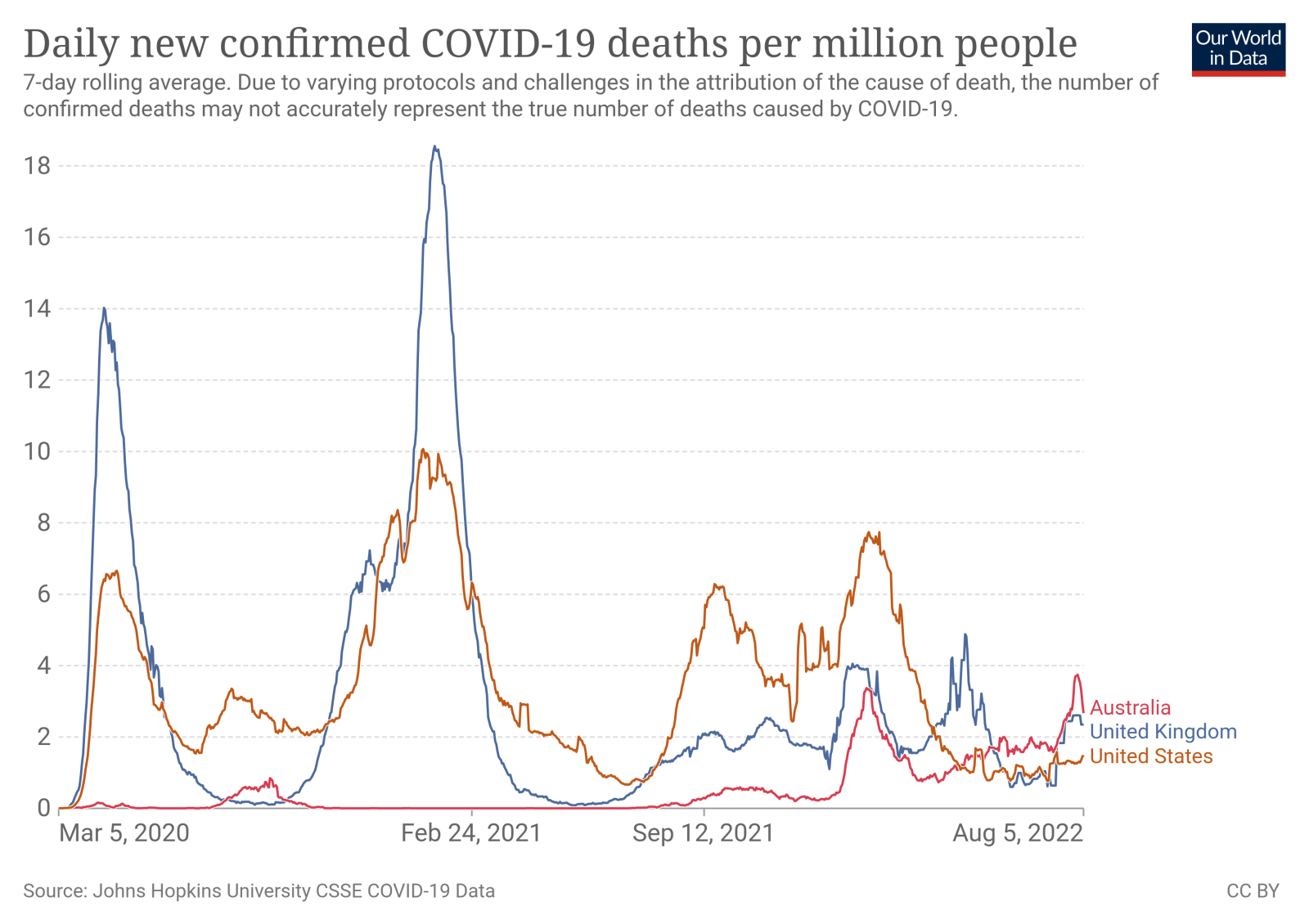 qed said:
Wow! Those are daily deaths. Seems Australia are late comers to this "party".

Can anyone explain what is going on with Australia?
Click to expand...

"We" managed very well in the early stages. Helped by firm political and bipartisan support. Small population, island geography. Easy to lock the doors. And strong cultural support of "we look after us" rather than "my rights are supreme". BUT strong restrictions could not be maintained even with both cultural and political support.

And we are strained in labour shortage limits due to work absences - affecting logistics of manufacturing and delivery. Supermarket shelves at least seemingly empty. More at nuisance levels - choice limitations rather than zero available. (Yesterday's example my wife had to go to an alternate shop to get eggs - and had to take the only size available.)

So with high vaccination rates, the epidemiological decision is "live with it". I have no additional insight into the high death numbers.
You must log in or register to reply here.

J
Claim: Genomic analysis of SARS-CoV-2 shows that it already existed in other countries such as France, India, Netherlands, England and United States