Here is a bit of local Covid response which I am not sure is bunk or not.

The items requested via inter-library-loan are quarantined for some number of days before they are processed and given to the patrons who've requested them. Supposedly to give any virus which might be on the item more time to "die".

Which has been a whole 'nother layer of bunk (viruses are not living when outside a cell as far as i know) that has gotten my goat this past year...

I don't care to fight this out (bad history between me and the manager at the library as I used to work there and the main reason I left was because of them), but it is something that deserves a bit of UV light of the great DeBunker Superhero to clean it up. Well, maybe not, but perhaps a bit of humor at least...

if i brought a library book home i would/do leave it in my car trunk for 3 days (or 5 if a glossy cover, because i'm a bit of a germophobe). Technically Covid is only viable on cardboard for 24 hours. so cloth covers should be around that time frame also. but people lick their fingers when turning pages... or read books in the john <which of course 5 days isnt enough but let's not think about that

obiwanbenobi said:
The items requested via inter-library-loan are quarantined for some number of days before they are processed and given to the patrons who've requested them. Supposedly to give any virus which might be on the item more time to "die".

Which has been a whole 'nother layer of bunk (viruses are not living when outside a cell as far as i know) that has gotten my goat this past year...
Click to expand...

You're of course correct in that a virus has no metabolism, so it could be considered "not alive" by that test. But an intact SARS-NCoV-2 virus can reproduce once it reaches a cell with an ACE2-receptor. To be safe against infection, this capability needs to be destroyed: the virus needs to "die".

Since a virus is a rather large and somewhat unstable molecule, it gets decays over time, depending on environmental conditions (for example, they keep intact longer in a fridge or freezer). The half-life of a coronavirus on organic material (e.g. paper) at room temperature is only a few hours; so that quarantine does reduce the potential infectiousness of books substantially. A 4-day quarantine may be as effective as wearing a properly fitted N95 mask while reading!

Since an infected reader might have sneezed into the book while it was open, UV sterilization would be impractical.
Last edited: Feb 8, 2021

Washing hands and not touching your face are hard things to train yourself to do (especially the not touching your face parts). It is unlikely that I will ever be able to catch myself every time I am reading a book to not touch my face. Still, there are immune system cells that are scanning the crud we get in our eyes, nose, etc and trying to render it uninfectious and to either break it down or get rid of it some other way. The effective infectious dose is likely larger than what remains on many items, a book that has been sneezed in, well gross, but I kinda don't try to think of things like that or the bathroom readers either.

In working at the library there were a few items that came back that we had to destroy and replace but not often, but we had a particular patron that I can only describe as a gross human being who had no concern at all for other people. We ended up cancelling their membership and luckily nobody around them would let them use their card either. Gross however, is a real understatement for what we'd get back and I always dreaded having to help them out or check items back in. I try not to judge people but sometimes circumstances would put a big fail on my forehead for that patron and a few others.

Mechanical means and degradation, chemical attack... hmm. When running my finger across a page i'd likely be smushing or degrading viruses that were there if there were any. Same for rubbing fingers on my sleeves or shirts.

I really don't get sick very often, I do wash my hands when I come in the door, I do wear my mask, but that isn't often since I don't get out much. For some items, if they are notably bad when I get them I will clean them up before I read them and also before I return them.

At work though I did not want to be a janitor or disinfecting worker and that was a part of what drove me out of it. Reactive airways to certain chemicals or cold air just make for a miserable day if you are being hit with them every half hour or so.

I would have not been bothered at all had I been able to use a mildly soapy wash cloth and change that out at times as needed - but no, not allowed. I'd washed thousands of books without troubles until certain smelly brands of wipes became the practice. No more after that would I volunteer or spend time doing that. Here at home I now have to avoid smelling bleach. Mom can't even smell it when she uses it and uses way too much. The struggle continues. Hahaha, just life...
Last edited: Feb 8, 2021

so the bugs got out and about in Melbourne my city in Victoria a state of Australia. Its been doin this every chance it gets and response is fast lockdown to curb spread allow contract tracing to get on top.
This time saying is the more transmissible UK strain with hope we will see if we can control vector in 5 day or so. Im lucky not much planned on to miss this weekend & my work deemed essential,,but many othersnot so happy...

Here is a summary of what happened on Friday: 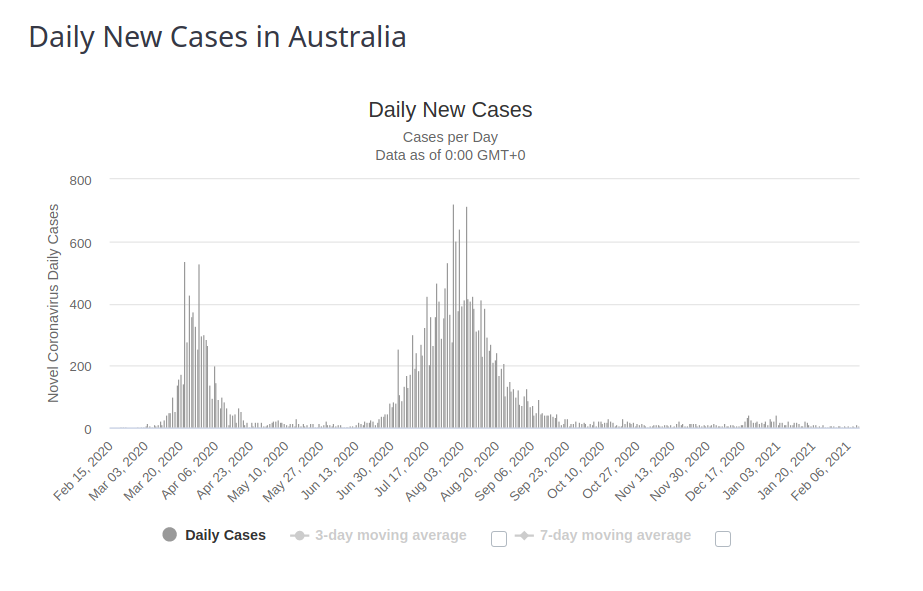 I see that New Zealand has recently gone back to a lockdown for a few days to hopefully prevent the community spread. I sure hope they can stamp it out again. They've had a good run so far.

I think they are finally starting to vaccinate the people who work in the quarantine places, but to me, that seems a bit obvious. The explanation for the delay is lack of vaccines and letting others more seriously impacted having access to them first.

My continued best wishes for everyone including NZ and AU...

Good podcast (two people)_... detailing current infection and re-infection trends and new strains.....explained in simpler words, but for nerdy ears.
https://www.medpagetoday.com/podcasts/trackthevax/91225
Last edited: Feb 19, 2021
You must log in or register to reply here.

Wuhan Funeral Urns as an Indicator of Death Rate?

Claim:Natural Covid-19 broke out of Wuhan lab (not man-made)
2