Contrail Angle with the Horizon - A Useful Distance Rule of Thumb? 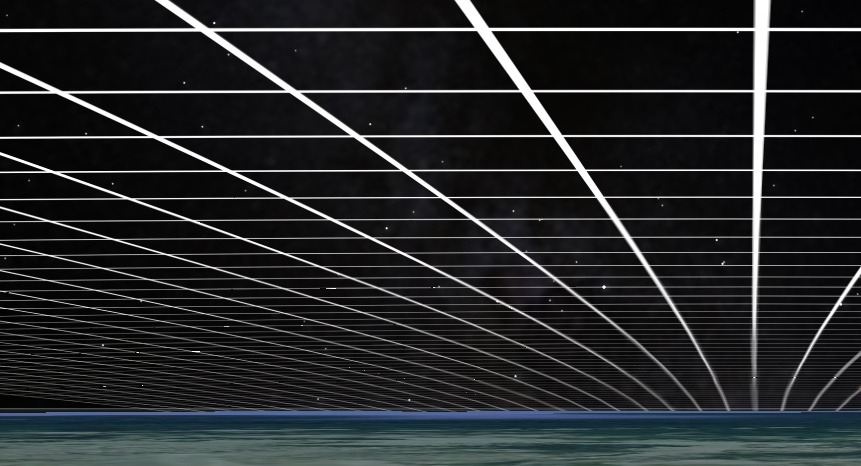 The above diagram shows a grid of lines at 35,000 feet above the ground, viewed from ground level. Each line spacing is five miles apart. I've previously shown how to use the elevation of the horizontal lines to get a ballpark estimate of distance. But what about the sloped lines, what can they tell us?

We've all seen a plane flying through the sky at what seems like a sharp angle, but it's actually just perspective. A plane flying directly towards you at a constant altitude will appear to be rising straight up in the air, then as it passes you and flies away from you will seem to be nose-diving towards the horizon.

Look at the grid above, the vertical line on the right represents that plane flying directly overhead of you, the angle between the track of that plane and the horizon is 90°.

The next line over to the left is just five miles away, it's parallel to the overhead track, but because of perspective it's tilted away from vertical. This time the angle between the track and the horizon is 55°. The next line over at 10 miles is at 35°.

Note the way the lines curve as they go over the horizon. Note how they initially seem to be converging at a vanishing point, but then appear to curve away from it. This is due to the curvature of the earth. This makes the "angle" of the line a bit tricky to measure when very close to the horizon, however it's quite rare to be able to see much of a contrail beyond 100 miles, and up to that distance the curve of the line does not diverge much from a simple straight line.

So in a simplified flat earth model (accurate at <100 miles), we can calculate the angle between the track and the horizon as ATAN(Altitude/Distance). Note that the "Distance" we are using here is the distance from a parallel track that passes directly overhead. It's the closest distance the plane will get to you (assuming it keeps going on the same track).

So more usefully, if we can measure the angle, then we can get a very rough estimate of the closest distance the plane will get to us. This can be useful in tracking down the plane in a flight tracker, and also gives a good sense of when a distant plane is going to get very close to you (handy for contrail photography).

Here's a chart of distances and angles. 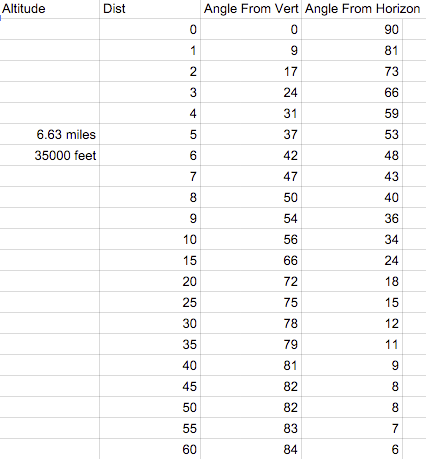 Really the key thing to remember is that when the angle wth the horizon is 45°, then the plane will pass you at horizontal distance equal to its altitude. So within 6 or 7 miles. Any angle steeper than 45° is going to be a very close plane, and a good one to watch for photography. Conversely, at the angle gets more and more shallow the distance increases quite rapidly. At just 30 degrees the distance has nearly doubled to 12 miles, and at 15 degrees it has quadrupled to 24 miles. Beyond that the angle cannot really be usefully estimated.

Really though the only practically useful rule of thumb is

I have been using contrail angles with the horizon for a quite a while to estimate how close the planes would come to my location and even thought about writing a similar post on how to use the contrail angle in a photo or video to deduce the closest distance between the flight track and the camera location. However, I abandoned this idea having realised that there would be a large margin of error due to the wind factor. A high altitude crosswind deflects the contrail from the track by 6-7° in average (I've observed a few cases of the angle between the contrail and the track being twice the average value). Viewed from the end of a contrail, the apparent angle will be even greater than that due to the perspective shortening. That is, the margin of error is largest for the contrail angle closer to the vertical.

At the end I have come to the the same practical conclusion:


Mick West said:
Really though the only practically useful rule of thumb is

"Angle of an approaching plane above 45 degrees = good photos"
Click to expand...

Staff member
I was going to discuss the wind problem, which was why I used the term "track" instead of "trail", but I did not get around to it, as quickly became apparent how inaccurate the method was even ignoring that, which removed the motivation for writing the post in the first place

Still, it's an interesting way of looking at things, and getting some appreciation for the scale and 3D nature of the contrails. There's still a lot of misconceptions about planes flying "up at an angle" when they are flying horizontal.

We could probably simplify the heuristic more:

Mick West said:
There's still a lot of misconceptions about planes flying "up at an angle" when they are flying horizontal.
Click to expand...

Yes, I've seen lots of comments along the lines of "commercial flights don't fly at angles like that". Then of course there are the "vertical" contrails that get mistaken for missiles, or meteors etc...

Here are a few photos, taken yesterday, March 15, 2016, which illustrate the wind effect on the contrail angle. The approaching A340 of THT7 flight had a nearly vertical trail and seemingly passed right overhead, with all four engine contrail casting shadows ahead of the plane: 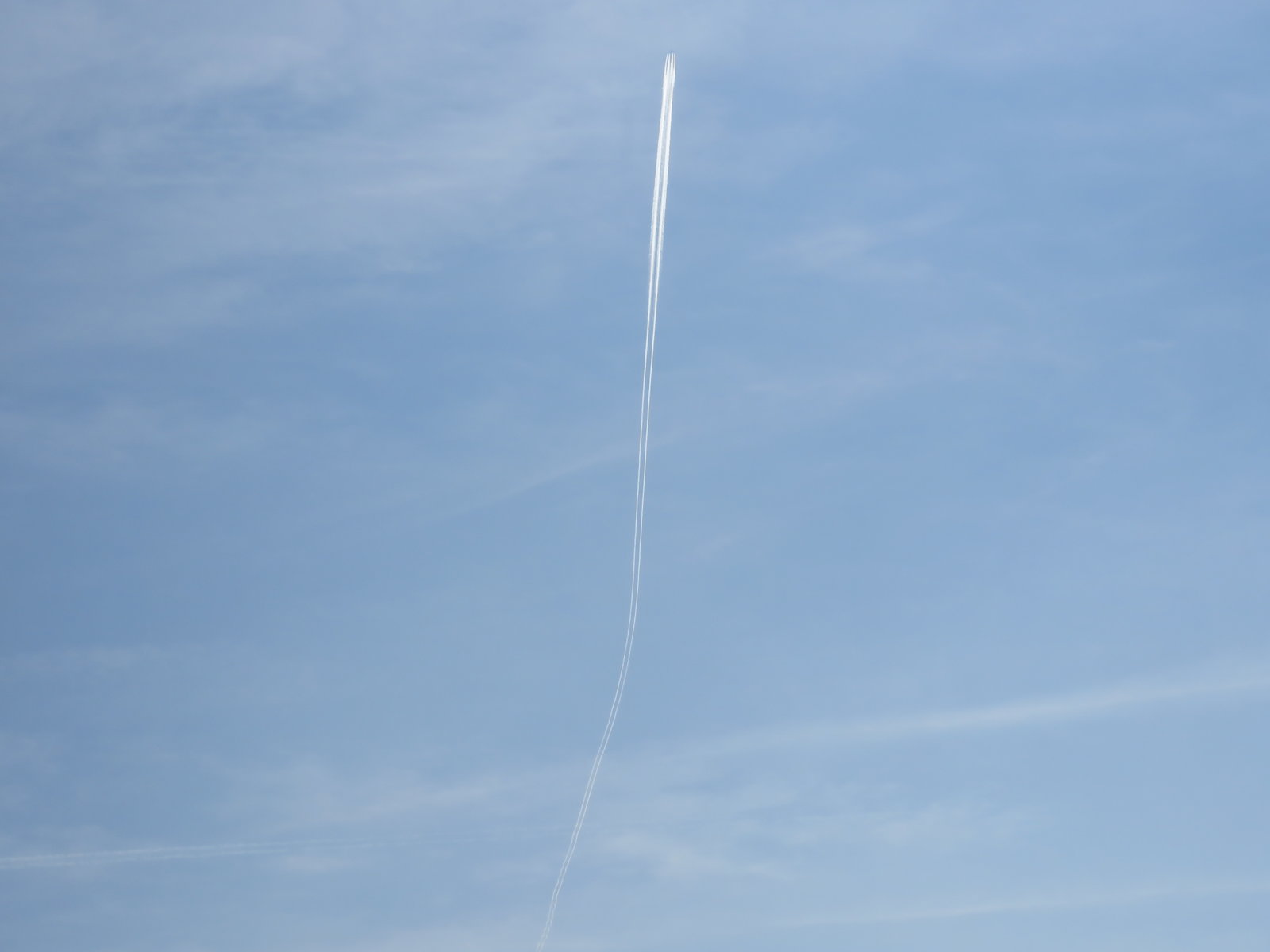 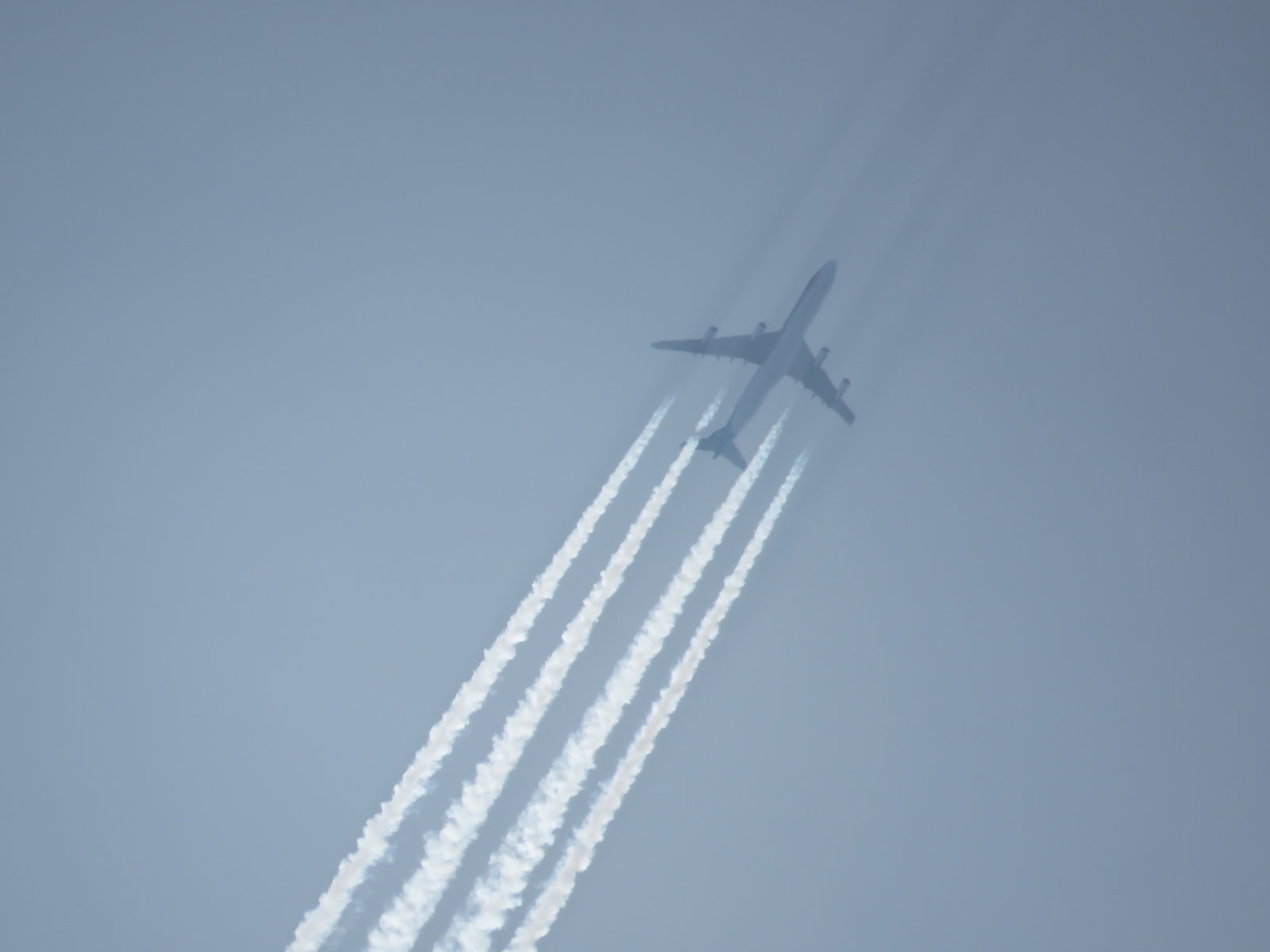 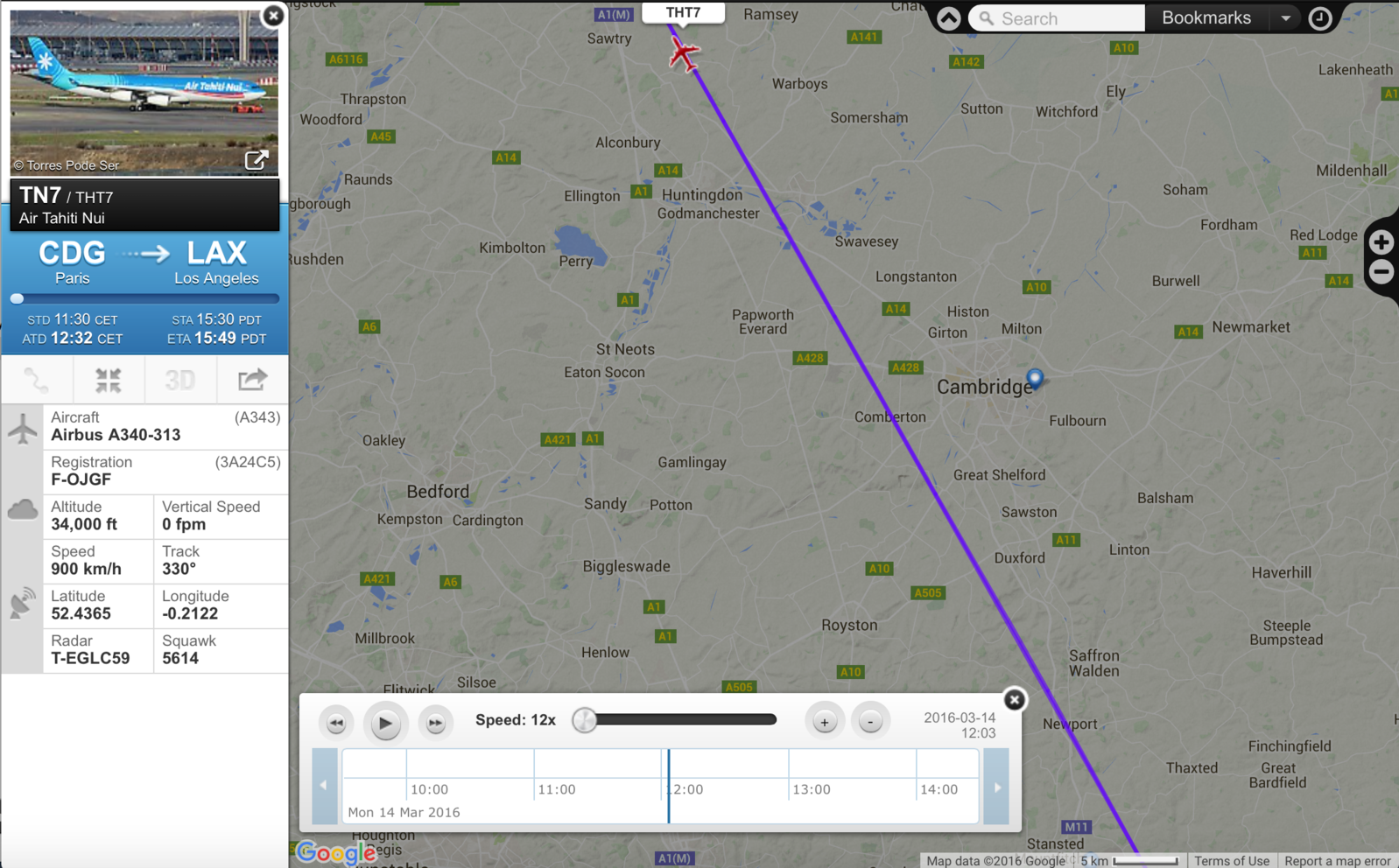 According to earth.nullschool.net, there was an easterly wind at about the same altitude of 250 hPa at the time. At the wind direction (85°) and speed of 145 km/h, it would have deflected the A340 contrail to the west by about 9°.

I've downloaded the THT7 track from FlightAware and displayed it at Google Earth from the camera location in the plane's approaching and receding directions. I also have modelled the contrails in the two points before and after the closest approach by adding straight lines at 9° to the track: 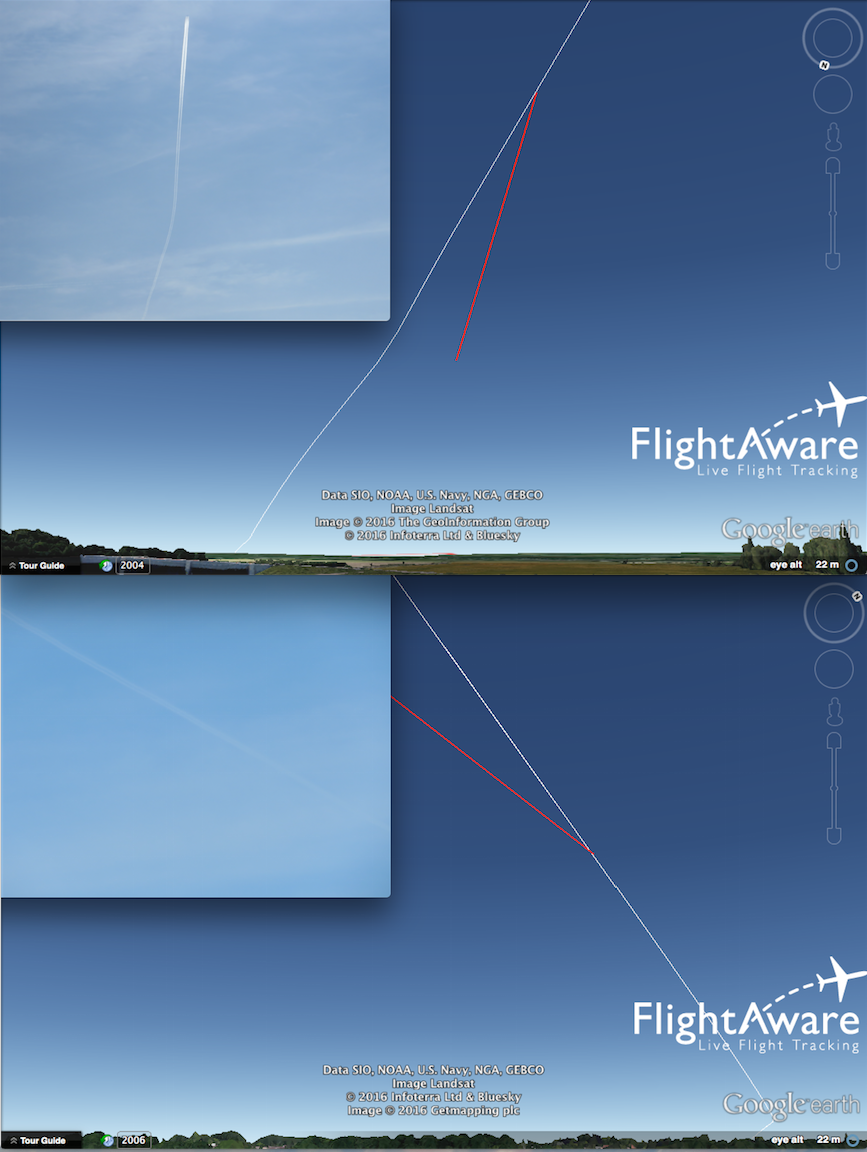 This exercise shows the approaching contrail at a steeper angle than the track, and the receding contrails at a milder angle than the track. This result is an agreement with my observation, but, however, the approaching angle was even steeper, and the receding angle was even milder than the modelled ones. A likely explanation of these differences is an underestimation of the wind speed, which could have been greater than 160 km/h (100 mph).

Staff member
Interesting stuff @Trailspotter. I just checked the path of this flight which left an almost perfectly "vertical" contrail on Saturday evening. The ground track passed within about 700 metres of my location. 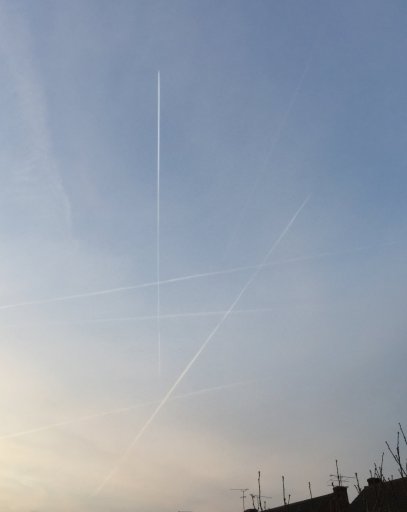 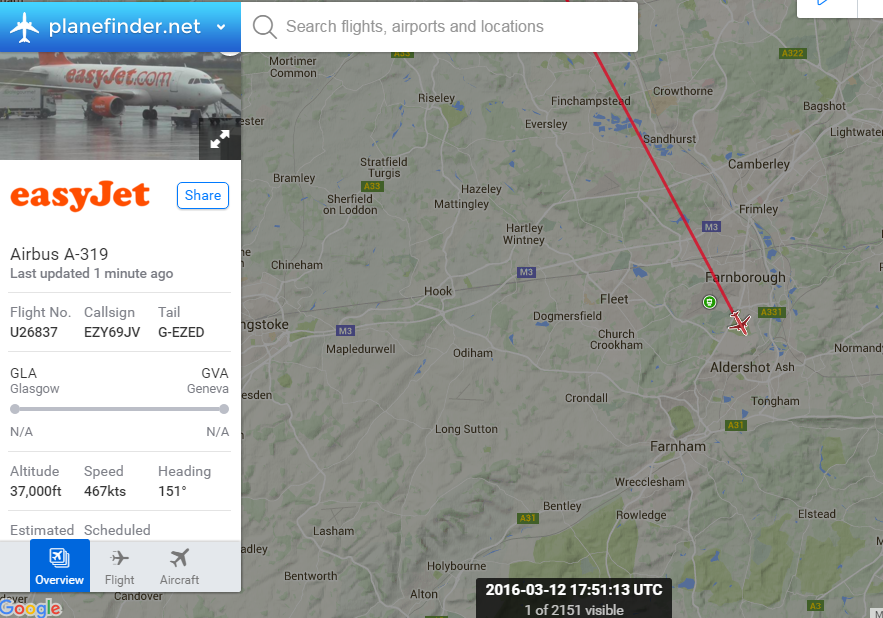 Looking at the wind, it was virtually behind the plane, so shouldn't have deflected the contrail very much at all. 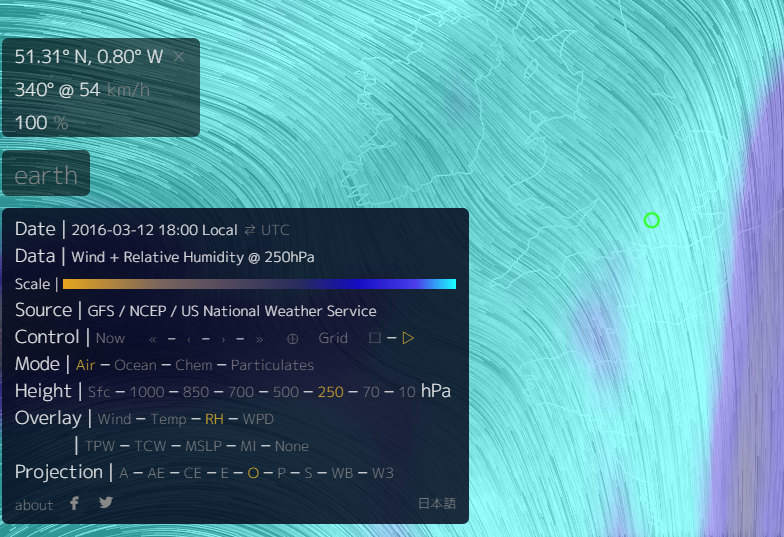 In the post only the lines that are paralell to the observer's line of sight. It's necessary to show lines that are purpendicular to the direction of the observer's line of sight. The purpundicular lines that are 100 km away from an observer and more should look curved. The thing with distant con(chem)trails (at this occasion it doesn't matter what they really are) that run over the whole horizon is that they must show curvature that is matching the earth's curvature. They spread for hundreds of kilometers. And we see this stretch from a perspective that would allow us to detect any curvature. At hundreds of kilometers there is noticable curvature of few vertical kilometer and more. I have never seen such a con(chem)trail. In contrary I have seen only perfectly horizontal lines. Attached are some photos I found when browsing.

Has anyone done an analysis of con(chem)trails that are purpendicular to the observer's line of sight?

Sobek said:
The purpundicular lines that are 100 km away from an observer and more should look curved.
Click to expand...

I doubt the curve would ever be visible. You would need a perfectly straight contrail that was maybe 100km or more long. One problem is that contrails grow and sink, and a moved by variable winds. Over a long distance the direction of the wind varies. So even if the flight past was straight, the contrail is unlikely to be perfectly straight.

At 200km you'd only see the contrails at sunset.

And really long perfectly straight contrails are really not that common.

Staff member
There's some distant contrails discussed in this thread. None are really suitable for detecting a curve.
https://www.metabunk.org/whats-the-farthest-distance-a-contrail-is-visible-at.t5628/
You must log in or register to reply here.