Staff member
Well done to Alan Robock for keeping his cool under an endless barrage of accusatory questions. It's quite interesting to watch - you can sense the protestors practically bursting with eagerness to ask their questions, and then ignore the answers and ask another. . They don't see it as an opportunity to find anything out, but rather to try to tell Alan all their facts so he will be shamed and converted.

Wow.The patience of a saint.

The drum circle was the icing on the surreal cake.

What more do you need to see? That video is a microcosm of the ENTIRE contrail/chemtrail debate in every form I've seen so far, a baying mob of frightened people ignoring the science and attacking the scientists credibility whilst simultaneously begging science for help and proof.

I was furious watching this, until the drumming at the end...Priceless.

The guy with the video camera is Tim Svetz, who goes by the name of Syd Stevens.

just. would. not. listen.

Unregistered said:
The guy with the video camera is Tim Svetz, who goes by the name of Syd Stevens.
Click to expand...

why the pseudonym?
U

I suspect his motivation is $$ and influence over others, as with the other conspiracy website profiteers.

I hadn't seen this video clip before. It is from the same series as Robock's video above, and the short unkempt guy asking him questions is Mauro Oliveira founder of geoengineeringwatch.org. Keith responds to Mauro's questions, and asks him to set the record straight, but Mauro denies his responsibility.
​


The video is cut off, but there is a more complete audio in these two videos:

You need to realize that this conversation was before WITWATS was made. Michael J. Murphy has plenty of direct commentary to use in the movie, but he chose to put something else in the movie with which he could persuade Keith as being unconcerned, when the exact opposite is true. Keith patiently answers all their questions.
​

True to form, when a scientist rebuts claims from the conspiracy promoters: "THIS MAN IS LYING" 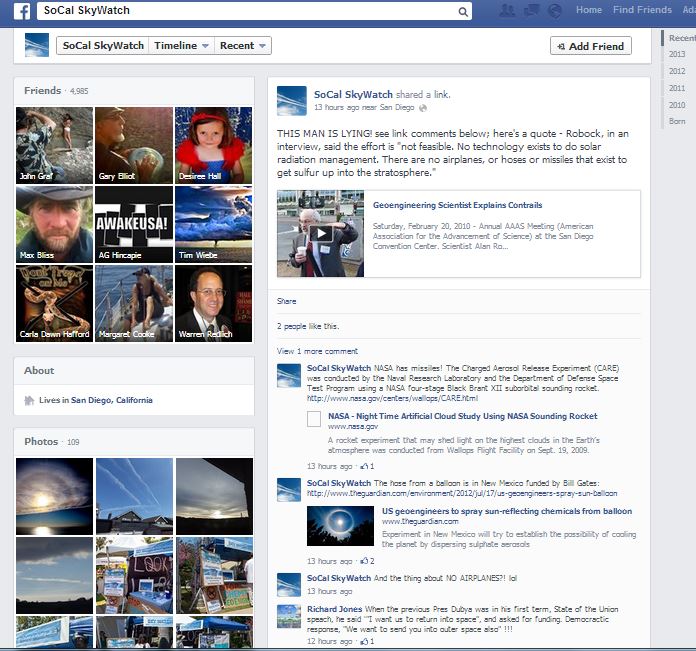 Staff member
That interview led to this very interesting exchange:

Jeff Bezos's rag has a story about "geoengineering":

Alan, were you quoted correctly here? Did you really say "No technology exists to do solar radiation management"? If so, how do you square this position with the results of the Aurora report (http://www.keith.seas.harvard.edu/Misc/AuroraGeoReport.pdf)

Yes. The Aurora study and ours were both theoretical studies about the cost of taking sulfur to the stratosphere. But the technology does not exist. There are no planes with sulfur tanks and sprayers. There are no hoses and balloons. There is no artillery. If you wanted to start stratospheric geoengineering tomorrow you could not do it.

In theory, such technology could be constructed, but the procedures for dealing with very dangerous sulfur compounds, SO2 or H2S or sulfuric acid have not been developed. Nozzles to spray the chemicals and try to produce aerosols of the desired size have not been developed. There is no supply chain for the different sulfur compounds you might want to use ready to be loaded onto planes. And there is certainly no squadron of planes waiting to do this. That is what I meant.

By the way, there actually were a few errors in the story. The Pinatubo cloud lasted about 2 years, not 2 months. And I disagree with Lynn's characterization of CO2 emission as geoengineering. Geoengineering requires intent to control climate.


It’s true that the hardware does not exist, but it is misleading to say that “the technology does not exist” because most people will interpret this as meaning that something cannot be done using standard commercial engineering practices.


Since we are talking aerospace, compare two examples:

·A new high-performance fire-fighting aircraft that could deliver 50 tons of water per pass.


If you put together specs for the water bomber you could get multiple bids with performance guaranties from the big aircraft companies, and if someone (U.S. Forest service?) paid the bill you could reasonably expect that the aircraft be delivered and work more or less as expected.


Whereas, for the hypersonic passenger aircraft you could get companies to bid on engineering studies and test units, but not on a completed aircraft because no one knows how to do it, through the basic science is known.


I suspect most people would say that the technology “exists today” in the former case and not in the latter.


My recollection is that you have agreed with this clarification in previous discussions of this topic. Have you changed your mind?


Now, turning to geo. Some of the technology does exist in the sense that you could procure the hardware in a few years. This is true of the modified business jet’s in the Aurora report but it’s not true of other systems we looked at like the sky-hose or the airships.


Your comments about sulfur compounds ignore very large differences between the chemicals.


H2S is toxic at a few hundred ppm. The idea of using large quantities of it in an aircraft or in balloons (as proposed in your paper) seems to me highly implausible. The risks to operators and the public would be very large. That’s why we ignored that option in our paper.


H2SO4 is routinely handled in industry today, it’s one of the most common industrial chemicals.


We proposed transporting S to the stratosphere (low mass and very easy to manage) and converting to SO3 in situ. We talked to a leading firm that engineers H2SO4 plants about designing a conversion system suitable for an aircraft and concluded that it was plausible using current technology.


My view is that technology needed to begin putting sulfates in the stratosphere does exist today in the sense I have defined here. Of course some more speculative technology does not exist, but so what?


Here is what I say in “A case for engineering the climate” (forthcoming from MIT press and available for pre-order at Amazon now, please excuse the self-promotion).

One could in principle use existing aircraft such as jet fighters, but modern business jets are more efficient and much cheaper. A stock Gulfstream G650, a top-of-the-line business jet, cruises at altitudes up to 50,000 feet. If a G650 were retrofitted with a low-bypass military engine such as the Pratt & Whitney F100, it could lift a payload of 13 tons to 60,000 feet, an altitude that would likely be adequate for the minimal deployment. A fleet of just twenty aircraft acquired within a few years at a cost of $1.5 billion should enable sufficient radiative forcing to produce large-scale climatic effects that were just barely detectable.

The requisite deployment technology does not exist as ready-to-go hardware today, but it could be supplied by any number of vendors using what the aerospace industry calls commercial off-the-shelf technology. We could build the deployment hardware far more quickly than we likely could develop the rest of the science, engineering, and governance required to begin deployment of geoengineering. In this sense that one can say that the technology exists today.

This is not an argument for or against immediate deployment. It is simply a statement of capability.​
Do you stand behind the statements you made in the article?

Yes, I stand by my statement, as I explained below. What you say is also true. It is a difference of definition, not of substance. And your book quote does not mention the technology needed to turn sulfur into droplets, nor to disperse them evenly in a wide tropical latitude band to prevent particle growth. My point is that if you wanted to start geoengineering today or next year, you could not do it, because the equipment does not exist.

It would only make sense—my view—to start after an greatly accelerate research program that brought the research community to limit the groupthink that comes from the current small research pool, and after some small-scale in situ tests. Moreover, I would not be in favor of starting without some governance structure though that need not mean a full UN global treaty.

The central point is that the basic technologies to begin introducing sulfates in the stratosphere and to monitor them exist today in the sense that they (a) could be ordered from many different suppliers, (b) could be produced with relatively low risk, (c) and could be ready within a few years much more quickly than the required science and governance.

Regarding particles, I do not think anyone is suggesting a direct spray system in the stratosphere. There are a host of technical problems. It simply makes no sense. As you know well, since you have been part of the meetings, we have been suggesting either emission of SO2 which goes the usual oxidation route to H2SO4 or H2SO4 directly which makes fine particles in situ by the mechanism described in Pierce et al.

Edit: What is this. I see a big microphone on screen, but the sound is still quite crappy..?
Oh well...

"you don't want to listen, you're just trying to beat us over the head with SCIENCE"!

"We know all about CONTRAILS, these aren't contrails they're CHEMTRAILS!"

They're like a mob of ignorant peasants shouting "burn the witch!"

I suspect his motivation is $$ and influence over others, as with the other conspiracy website profiteers.
Click to expand...

The NWO or the IRS?

that was very very hard to watch, I found this thread researching MB for Alan Robock as other claims have popped up in news. This report with a vid of Alan Robock at the end

If it seems like it never stops raining, blame the Russians. Or even the North Koreans.

A leading academic has told how he got a mysterious phone call asking whether foreign countries could be triggering droughts or flooding.

Professor Alan Robock, from Rutgers University in New Jersey, said: ‘Consultants working for the CIA rang and said we’d like to know if someone is controlling the world’s climate would we know about it?

derwoodii said:
that was very very hard to watch, I found this thread researching MB for Alan Robock as other claims have popped up in news. This report with a vid of Alan Robock at the end

If it seems like it never stops raining, blame the Russians. Or even the North Koreans.

A leading academic has told how he got a mysterious phone call asking whether foreign countries could be triggering droughts or flooding.

Professor Alan Robock, from Rutgers University in New Jersey, said: ‘Consultants working for the CIA rang and said we’d like to know if someone is controlling the world’s climate would we know about it?

The rest of that article says:


‘Of course they were also asking - if we control someone else’s climate would they then know about it.’

The professor is one of many scientists from around the world are actively looking at manipulating the weather as a way of combating climate change.

Geoengineering techniques range from cloud seeding, in which chemicals are sprayed by planes trigger rainfall, to shooting mirrors into space to reflect sunlight and cool the Earth.

Professor Robock told the callers that any attempts to meddle with the weather on a large scale would be detectable.

Emphasis is mine to point out that cloud seeding is not a geoegineering technique; it is a weather modification technique.