This reddit thread was posted with the attached video

The claimant also states that this is NOT a air to air refueling jet (as the video very much looks like) The video and claim also focuses on some other "UAPs" which look very much like flies which were not noticed at the time of the video being filmed.

The claim (as is common) states that the UFO went on to perform unusual maneuvers, but these were unfortunately not captured in the video.

Given that there is a video and date/time/location it could be investigated to some degree, but I don't have premium access to FR24.
Last edited: May 21, 2020 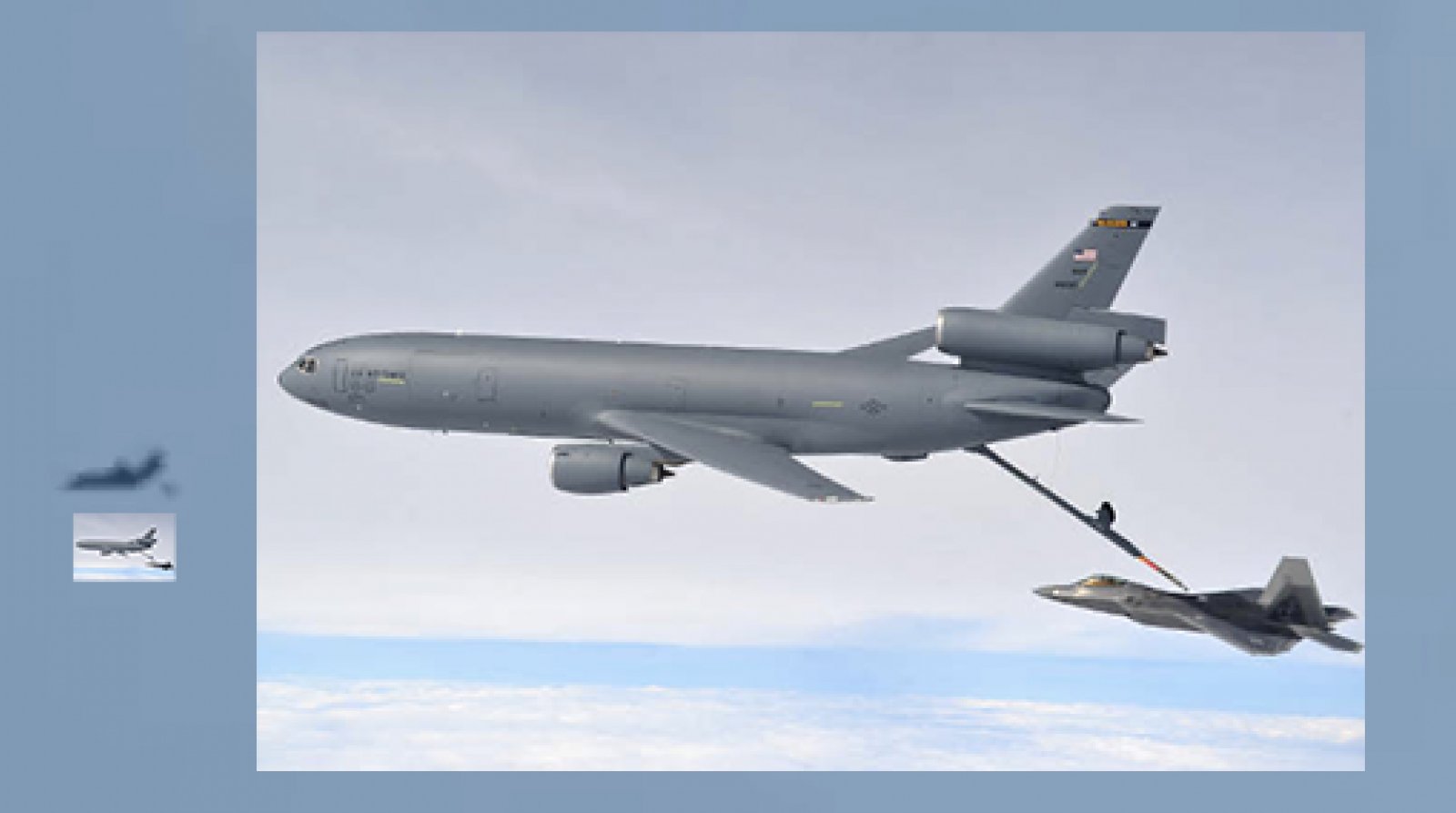 My first impression was: 'UFO' is a part of the plane, seen at a particular angle. In particular, a winglet of a large business jet, like Bombardier Challenger 600 series below. 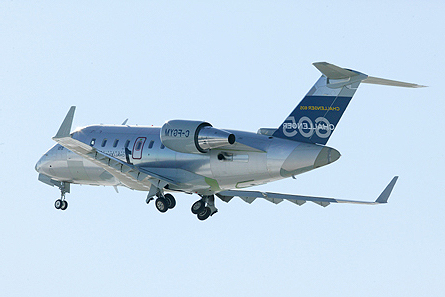 Trailspotter said:
My first impression was: 'UFO' is a part of the plane, seen at a particular angle. In particular, a winglet of a large business jet,
Click to expand...

I thought that too, but it seems pretty consistent in its separation. The plane does not seem to be at the correct angle.

Hard to say, of course.

his account in the OP is a bit different then he reported to national UFO.
http://www.nuforc.org/webreports/150/S150557.html

This aircraft had a round craft following close behind it. I'd say 20 to 30nfeet behind the tail. Even with the fuselage from my vantage point. The craft was probably the size of a car. I cant believe what I was seeing. I then needed proof.. a witness. So I had a choice to video it or get my wife. I chose to get my wife. Bad choice, by the time she got out it was just about out of site. It was a round craft that kept the same distance the 20 seconds or so I witnessed it. I will be looking for any public cams that might have seen something. My home security cams sees me running into the house to get my wire at 16:29.33sec It took us 15 seconds to come back outside. It was still tailing the jet and I lost sight in the distance behind trees.
There are so many ppl that live in this area someone else had to see this.

The planes avoid radar detection by flying on the tails of commercial airliners or carrying sophisticated radar-scrambling scrambling gear that befuddles air traffic control as they cross the nation's southern borders.

''We know for a fact that the aircraft they're flying aren't airworthy,'' said Milford Conarroe of the Federal Aviation Administration.

''If they know there's a scheduled airline, they'll tuck in real close on him so they'll show up on radar as a single blip. They get within a few feet of them sometimes,'' Mr. Conarroe said from his office in El Paso, Tex., where he works for the Drug Intelligence Agency.

Is there flight data to support the assertion of a Delta MD88 landing at JFK at that date/time?

The other objects holding off could be the rest of the squadron if this was a refueling operation.

Content from external source
Why is there an hour of difference?


It was clear as day as it flew directly overhead at 1800 feet on a beautiful cloudless day. Relative temp around 58f. The commercial aircraft was a Delta Md 88 on Long Island Approach. It was proceeding onto a final with JFK Approach as this thing was glued behind it. Reminded me of how a car pulling a car with the rope tight and it glides at the same speed and direction with out deviations.

I was wondering why a plane on an approach to an airport to the West would be heading north, but I found an explanation for that:

When going back to yesterday evening using flightradar24's Playback feature, one finds much more pronounced turns over Long Island (thanks to ymb1 for suggesting this): 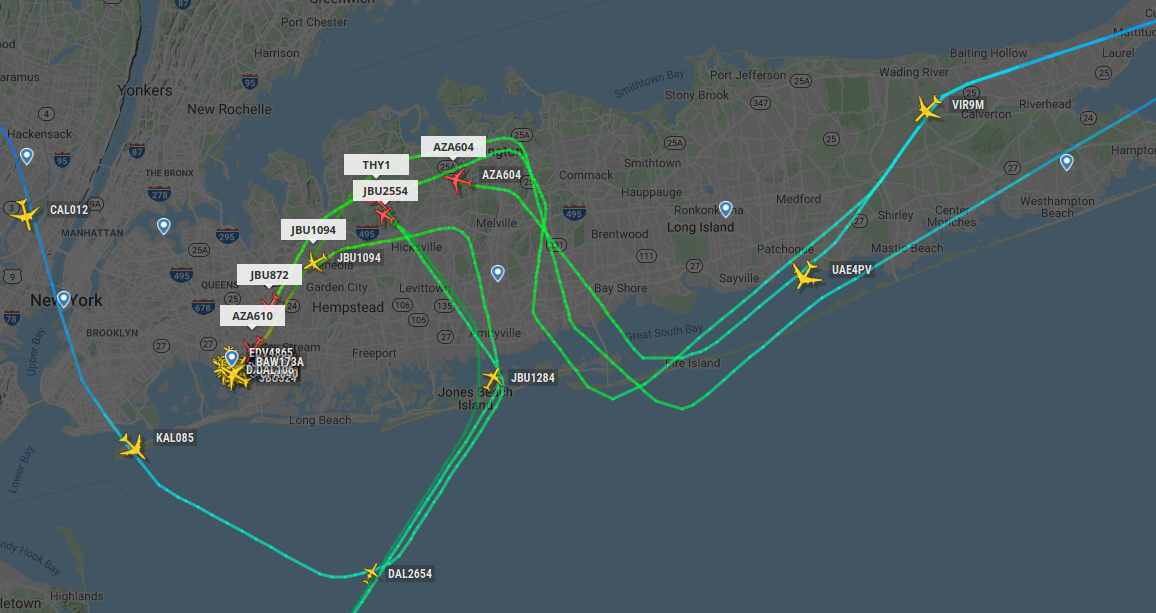 Here, aircraft are approaching runways 22L/R. You can see that there are also aircraft from the South and West joining the queue to land and ATC needs to make sure there is enough separation between the aircraft. The easiest way to achieve this is by instructing them to fly in a certain direction ("radar vectors") until there is enough space to fit them into the queue, which results in such a zigzag pattern.

Deer Park would be approximately under the NW portion of these flight paths:

Why would a refueling operation occur over Long Island? and at what altitude? Is the reported altitude even correct, shouldn't the aircraft appear larger if it was that close?

From 1:05 in the video posted on reddit, they're inverting the colors, and a connection between the two objects is visible: 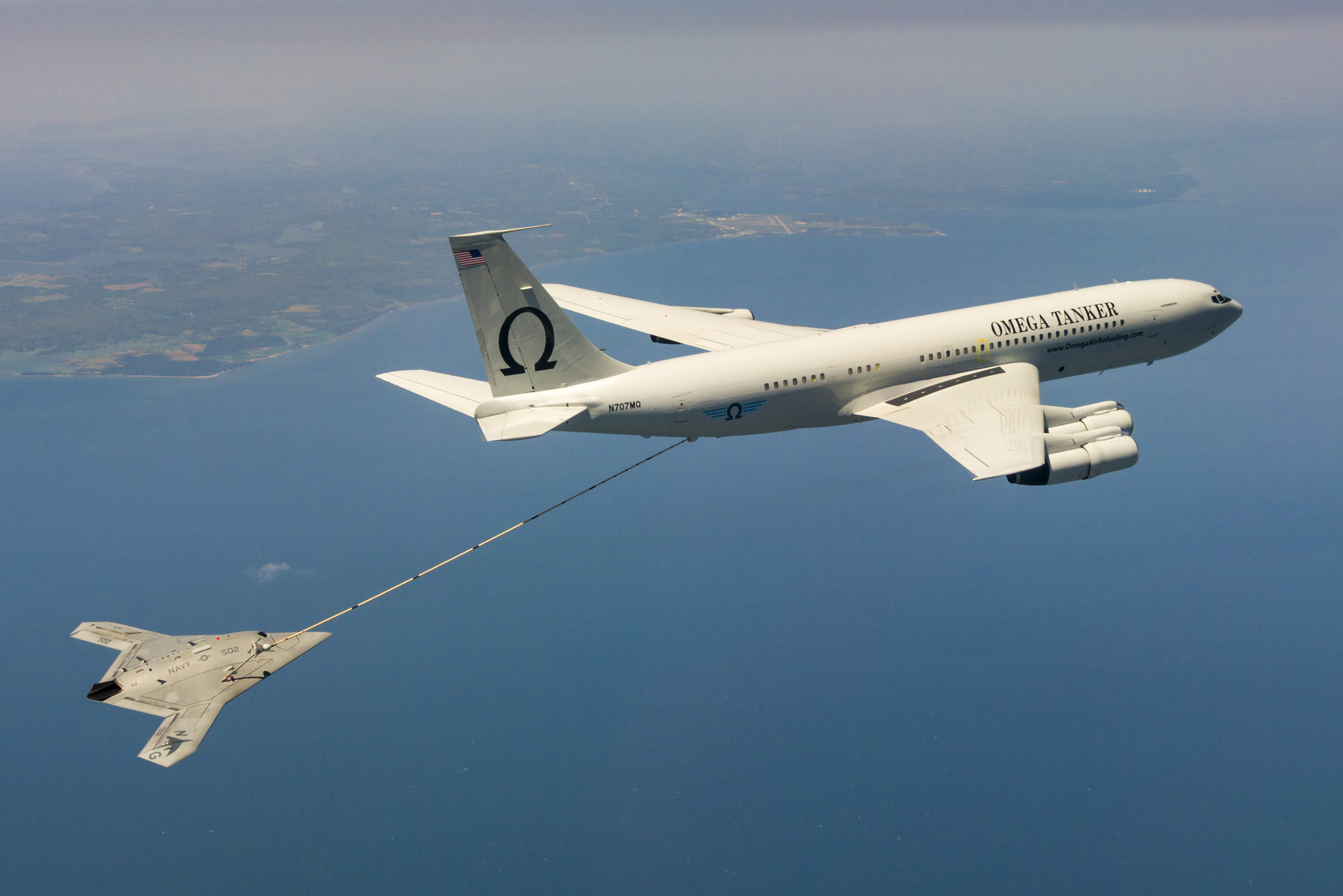 Mendel said:
Why would a refueling operation occur over Long Island?
Click to expand...

they did in Sept 2019. some United Nations gathering. so military jets protecting the airspace. if that is so, i'm sure it happens at other times.. and 11/11 is Veteran's Day. so maybe they were doing fly overs for the celebrations? 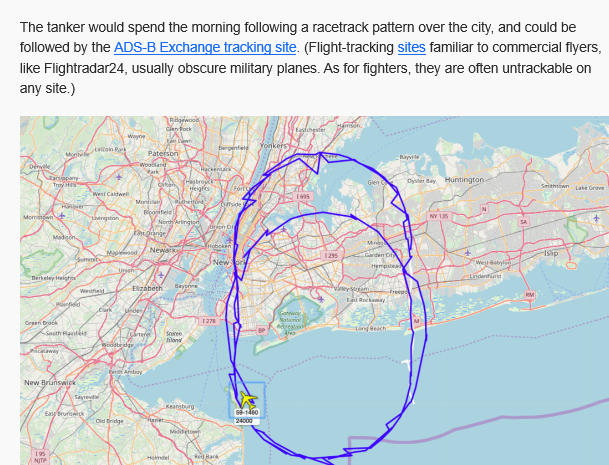 US Presidents get an active fighter intercept zone around where they are since 9/11
https://text.npr.org/s.php?sId=518861719

Those fighters need to refuel.

Red flags
Witness claims experience and expertise, but does not give any details.

Aviation and Space is my thing. I've been in the field almost 30 years both professionally and personally.
I'm considered an expert(my profession) when it comes to aircraft identification(both military and civilian). Ive been part of refueling ops, flight tests, experimental weather equipment launched by balloons, and plenty of other things that allow me to make this educated call that I know I saw.
I'm also proficient with meteorology and weather phenomena. As a hobby I've been staring at the sky through a telescope most of my life. I can easily distinguish constellations, satellites, comets, meteors, rocket launches, etc.

Content from external source
Is he a civilian or in the military?

Ive been part of refueling ops, flight tests, experimental weather equipment launched by balloons, and plenty of other things

Content from external source
No one uses that term.


And his claim is inconsistent. This is from the YT description.

Ive been working Aviation for 20yrs but been into since I was a lil boy. 2 family members were chief mechanics for major airlines so I've always been into Aviation.

Content from external source
When a witness states, without being prompted, "It isn't X," there's a 95 percent chance it is X.

I also know how bugs move and erratic behavior is tough and very similar of most sightings. I know field of view and how an object can enter and exit visual fields in the lens focal point. This can fool the brain to look like it came out of nowhere but it only beginning to enter the focal point.
So, I know and have been part of military refueling in the past and this was no tanker filling an aircraft. I thought of that immediately and ruled it out.

As it flew overhead it was silent other then the jet noise. [wut?] I saw a bit of blue sky btwn the object and the aircraft so I know it wasnt attached even if that was possible.

his story is all over the place. I didn't want to sign up for mufon to see the alleged mufon report, but he said the alleged "other guy" added a video. but instead of linking the video he did his own remake of it.
and later on in reddit thread it sounds like HE made the video (says he only showed it to 3 people).

and he didn't report to mufon, even though he saw the alleged other guy's story there. he was already signed in, why not back the guy up? why post on a totally different site?

Then he picks a story from Kansas and implements part of that into his reddit OP (it zoomed off unnaturally) even though his nuforc report says nothing like that.
Then he shows a pic of a blank sky he allegedly took at 3:30 that day... so why not take a pic of the plane if you were taking pics?
and do cctv cams save video for 6 months?
and 6 months isn't very long to have such a faulty memory of what happened when you saw a real ufo in real time! (i'd remember at least that long)

The refueling idea would explain the time discrepancy: if this was an operation that went on for quite a bit, there could have been more than one refueling, one of these observed by the reddit poster, and another caught on video an hour later.

Trailspotter said:
My first impression was: 'UFO' is a part of the plane, seen at a particular angle. In particular, a winglet of a large business jet, like Bombardier Challenger 600 series below.

The winger look too far rear on the fuselage and the tail seems much larger in proportion
You must log in or register to reply here.