Newly disclosed emails show that Libya’s plan to create a gold-backed currency to compete with the euro and dollar was a motive for NATO’s intervention....

Historians of the 2011 NATO war in Libya will be sure to notice a few of the truly explosive confirmations contained in the new emails: admissions of rebel war crimes, special ops trainers inside Libya from nearly the start of protests, Al Qaeda embedded in the U.S. backed opposition, Western nations jockeying for access to Libyan oil, the nefarious origins of the absurd Viagra mass rape claim, and concern over Gaddafi’s gold and silver reserves threatening European currency....

The Threat of Libya’s Oil and Gold to French Interests
Though the French-proposed U.N. Security Council Resolution 1973 claimed the no-fly zone implemented over Libya was to protect civilians, an April 2011 email sent to Hillary with the subject line “France’s client and Qaddafi’s gold” tells of less noble ambitions.

Most astounding is the lengthy section delineating the huge threat that Gaddafi’s gold and silver reserves, estimated at “143 tons of gold, and a similar amount in silver,” posed to the French franc (CFA) circulating as a prime African currency. In place of the noble sounding “Responsibility to Protect” (R2P) doctrine fed to the public, there is this “confidential” explanation of what was really driving the war [emphasis mine]:

This gold was accumulated prior to the current rebellion and was intended to be used to establish a pan-African currency based on the Libyan golden Dinar. This plan was designed to provide the Francophone African Countries with an alternative to the French franc (CFA).

(Source Comment: According to knowledgeable individuals this quantity of gold and silver is valued at more than $7 billion. French intelligence officers discovered this plan shortly after the current rebellion began, and this was one of the factors that influenced President Nicolas Sarkozy’s decision to commit France to the attack on Libya.)

Though this internal email aims to summarize the motivating factors driving France’s (and by implication NATO’s) intervention in Libya, it is interesting to note that saving civilian lives is conspicuously absent from the briefing.

Instead, the great fear reported is that Libya might lead North Africa into a high degree of economic independence with a new pan-African currency.

French intelligence “discovered” a Libyan initiative to freely compete with European currency through a local alternative, and this had to be subverted through military aggression.

Content from external source
(This story was also published by Foreign Policy Journal, a site dedicated to often bizarre, overblown, and alarmist critiques of Western international politics, and the Centre for Research on Globalisation, a subsidiary of Globalresearch.ca.)

Unfortunately, I do not have time to go through the emails themselves, so I cannot do much here. My first reaction however is that the article seems replete with instances of hyperbole and non-sequitur, and the author draws conclusions that even his/her own readings of the emails fail to support. It is also of interest to note that none of the direct quotes from the emails support the article's central allegation as expressed in the headline.

UNCLASSIFIED U.S. Department of State Case No. F-2014-20439 Doc No. C05779612 Date: 12/31/2015
RELEASE IN PART
B6
From:
sbwhoeop
Sent:
Saturday, April 2, 2011 10:44 PM
To:
Subject:
H: France's client & Q's gold. Sid
Attachments:
hrc memo France's client & Q's gold 040211.docx; hrc memo France's client & Q's gold
040211.docx
CONFIDENTIAL
April 2,.2011
For: Hillary
From: Sid
Re: France's client & Qaddafi's gold
1.
A high ranking official on the National Libyan Council states that factions have developed within it. In part this
reflects the cultivation by France in particular of clients among the rebels. General Abdelfateh Younis is the
leading figure closest to the French, who are believed to have made payments of an unknown amount to him.
Younis has told others on the NLC that the French have promised they will provide military trainers and arms. So
far the men and materiel have not made an appearance. Instead, a few "risk assessment analysts" wielding
clipboards have come and gone. Jabril, Jalil and others are impatient. It is understood that France has clear
economic interests at stake. Sarkozy's occasional emissary, the intellectual self-promoter Bernard Henri-Levy, is
considered by those in the NLC who have dealt with him as a semi-useful, semi-joke figure.
2.
Rumors swept the NLC upper.
echelon this week that Qaddafi may be dead or maybe not.
3.
Qaddafi has nearly bottomless financial resources to continue indefinitely, according to the latest report we have
received:
On April 2, 2011 sources with access to advisors to Salt al-Islam Qaddafi stated in strictest confidence that while the
freezing of Libya's foreign bank accounts presents Muammar Qaddafi with serious challenges, his ability to equip and
maintain his armed forces and intelligence services remains intact. According to sensitive information available to this
these individuals, Qaddafi's government holds 143 tons of gold, and a similar amount in silver. During late March, 2011
these stocks were moved to SABHA (south west in the direction of the Libyan border with Niger and Chad); taken from
the vaults of the Libyan Central Bank in Tripoli.
This gold was accumulated prior to the current rebellion and was intended to be used to establish a pan-African currency
based on the Libyan golden Dinar. This plan was designed to provide the Francophone African Countries with an
alternative to the French.franc (CFA).
(Source Comment: According to knowledgeable individuals this quantity of gold and silver is valued at more than $7
billion. French intelligence officers discovered this plan shortly after the current rebellion began, and this was one of the
factors that influenced President Nicolas Sarkozy's decision to commit France to the attack on Libya. According to these
individuals Sarkozy's plans are driven by the following issues:
a. A desire to gain a greater share of Libya oil production,
b.
Increase French influence in North Africa,
UNCLASSIFIED U.S. Department of State Case No. F-2014-20439 Doc No. C05779612 Date: 12/31/2015
UNCLASSIFIED U.S. Department of State Case No. F-2014-20439 Doc No. C05779612 Date: 12/31/2015
c.
Improve his intemai political situation in France,
d.
Provide the French military with an opportunity to reassert its position in the world,
e.
Address the concern of his advisors over Qaddafi's long term plans to supplant France as the dominant power in
Francophone Africa)
On the afternoon of April 1, an individual with access to the National Libyan Council (NLC) stated in private that senior
officials of the NLC believe that the rebel military forces are beginning to show signs of improved discipline and fighting
spirit under some of the new military commanders, including Colonel Khalifha Haftar, the former commander of the anti-
Qaddafi forces in the Libyan National Army (LNA). According to these sources, units defecting from Qaddafi's force are
also taking a greater role in the fighting on behalf of the rebels:
UNCLASSIFIED U.S. Department of State Case No. F-2014-20439 Doc No. C05779612 Date: 12/31/2015

The only points I'd really dispute are the accuracy of the article title/claim that the emails are direct evidence of the motives of the USA & NATO (I suspect that should actually be the U.N.). The relevant email is dated 2nd April 2011, the U.N. resolution had already been adopted in March that year, and the source only attributes those motives to France/Sarkozy, there is no evidence here that the USA or other members of the U.N./NATO shared those motives.

The author also talks about an "admission" that Western special forces were already on the ground, which strikes me as a little odd - there was much discussion here in the UK in 2011 about the MoD confirming the SAS was active in Libya. He also makes claims of who was doing exactly what, which aren't supported by the emails:-

Blumenthal relates that “an extremely sensitive source” confirmed that British, French, and Egyptian special operations units were training Libyan militants along the Egyptian-Libyan border, as well as in Benghazi suburbs.

Content from external source
What is actually said is:-

An extremely sensitive source added that the rebels are receiving direct assistance and training from a small number of Egyptian Special Forces units, while French and British Special Operations troops are working out of bases in Egypt, along the Libyan border. These troops are overseeing the transfer of weapons and supplies to the rebels.

Content from external source
Another minor error has the author stating that foreign special forces supplied "a seemingly endless supply of AK47 assault rifles and ammunition", that information actually comes from an inventory of weapons the rebels had already stockpiled.

The most concerning part for me is the information on the rebels executing PoWs, since the emails do appear to indicate "we" were aware even before bodies like the U.N. and Amnesty International started voicing their concerns.

It looks like this story is making the rounds. This appeared on the Eurasia Daily Facebook page 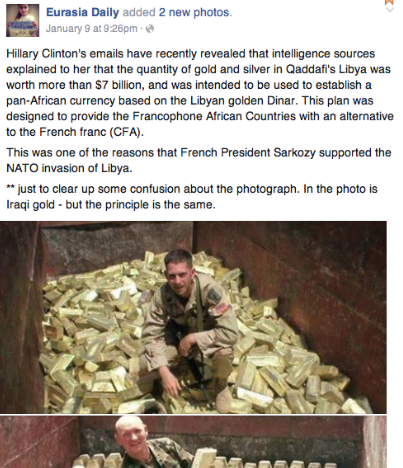 
It also appeared on something called Fort Russ under the title

I thought it was interesting to see how this website decided to spin the issue of Libyan gold:

The U.S. State Department has published a series of emails that reveal the volume of gold reserves of Gaddafi. According to the documents, the reserves are so great that they could become the basis for creating a pan-African currency, which, in turn, could compete with the dollar in the region.

That spin is interesting. When I saw the $7 billion figure my first thought was that isn't that much money, here we don't get a figure, we're just told that it's a lot.

Secondly, they neglect to address the timing of the emails which show the information came to light after the UN resolution was passed. If the USA, UK etc had known that France/Sarkozy had an ulterior motive and shared it, why would there be any need for an intelligence source to report it?

Ray Von Geezer said:
When I saw the $7 billion figure my first thought was that isn't that much money,
Click to expand...

$7 Billion is about the Libyan money supply before 2004.
http://data.trendeconomy.com/indicators/Money_supply_M1/Libya 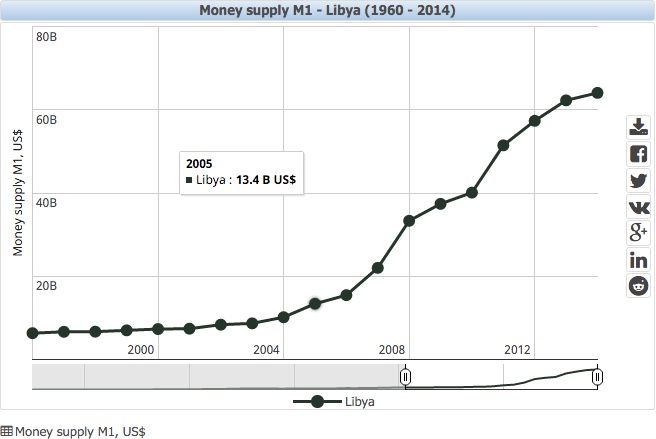 To look at it another way, the actual cost of military operations was significant and likely not offset by $7 billion, whether UK/US/UN forces recovered it.

The multinational force deployed for operations in Libya was extensive and costly.


The same is true with respect to the 110 cruise missiles launched.