Below is a Wikileaks email purportedly from Clinton's private email server. The email chain is from January 2013 and passes along an article that the sender laughs off as being a conspiracy theory. It's being used on multiple sites to support claims that Clinton has brain damage, but the email messages are being left off, and just the original EU times article being recirculated. For example, this article from USA Politics Today.

According to a report released by Wikileaks, Hillary Clinton was in a C-12 Huron aircraft that made an emergency landing at Ahwaz International Airport on the border of Iran and Iraq, skidding off the runway and crashing, leaving Clinton “unconscious and bleeding profusely” according to the report.

Also, according to the report, Clinton was on a secret mission.

Clinton was traveling with members of Seal team 4 (one of whom was reportedly killed in the crash, Commander Job W. Price, who the government claimed died of a possible “suicide,” but listed his death as a non-combat injury” ).

Here's the text-searchable version of the email posted on Wikileaks, but it's easier to read in the original PDF version linked above.


Posted by EU Times on Dec 30th, 2012 UNCLASSIFIED U.S. Department of State Case No. F-2014-20439 Doc No. C05797628 Date: 02/29/2016 A new Foreign Military Intelligence (GRU) report circulating in the Kremlin today is saying that United States Secretary of State Hillary Clinton [photo 2nd right] was injured, and a top US Navy Seal Commander killed when their C-12 Huron military passenger and transport aircraft crash landed nearly 3 weeks ago in the Iranian city of Ahvaz near the Iraqi border. Iranian intelligence agents quoted in this GRU report confirm that the C-12 Huron aircraft is still in their possession in Ahvaz, but will only admit that the plane was "forced to land because of technical problems". The US Navy Seal member reported killed in this bizarre incident, this report says, was indentified as Commander Job W. Price [photo 3rd right] who as a leader of this highly specialized American Special Forces unit protects high-ranking diplomats traveling in Middle Eastern and Asian combat zones. Curiously, US media reports on Commander Price's death say it being investigated as a possible suicide as he died from what the American Defense Department describes as "a non-combat related injury".

Equally as curious, US media reports state that Secretary Clinton will return to work next week after her having suffered what they describe as a "nasty bout with stomach flu" and a "concussion" which have kept her missing from public view the past three weeks. This GRU report, however, states that US military flight logs recorded by Russian air and space forces confirm that Commander Price, and other members of US Navy Seal Team 4, left their base in Urozgan Province, Afghanistan on a flight to US Naval Support Activity Bahrain where they met up with Secretary Clinton and all of them transferred to the C- 12 Huron that began a flight path to Baghdad, Iraq. Within minutes of leaving Bahrain airspace, this report says, the C-12 Huron carrying Secretary Clinton and her US Navy Seal protectors, "without notice," deviated from their assigned flight path heading, instead, directly towards Iran's Ahwaz International Airport where, coincidentally, Iranian President Mahmoud Ahmadinejad had previously landed on an "unscheduled" visit. UNCLASSIFIED U.S. Department of State Case No. F-2014-20439 Doc No. C05797628 Date: 02/29/2016 Important to note, GRU analysts say in this report, was that when the C-12 Huron entered into Iranian airspace neither American nor Iran air force units responded clearly indicating that this secret mission was sanctioned.

Upon the C-12 Huron landing at Ahwaz, however, this report says it encountered "extreme turbulence" causing it to leave the runway where its main landing gear then collapsed causing it to crash. Within seconds of the C-12 Huron crashing, this report continues, Iranian emergency and security personal responded freeing the victims, including Secretary Clinton who was reportedly unconscious and "bleeding profusely." After emergency aid was given, GRU agents stationed in Iran state that another US military flight was dispatched from Bahrain to Ahwaz which evacuated all of those wounded and killed in the crash including Secretary Clinton. Strangely to note, this report says, is that in the aftermath of this crash, Iran's main oil company announced today that they were buying the Ahwaz airport with the intention of moving it because, they say, oil was discovered beneath it. To what the Americans mission to Iran was about this report doesn't speculate upon, other than to note that with the Gulf State Monarchies rapidly approaching a union of their oil rich nations to counter Iranian power, and with President Obama signing a new law this past week to strengthen American borders against threats from Iran, and with the highly-publicized "Velayat 91" Iranian military exercises now taking place across a wide area from the Strait of Hormuz, a new and catastrophic war in this region is much closer to being a reality than many realize. To if Secretary Clinton's mission was meant to forestall such a war it is not in our knowing, other than to note, that with the United States continued backing of some of the cruelest dictatorships in the world, our entire planet is but one spark away from a fire that could very well consume us all.
Source Breaking News A new report by Israeli media and Mossad now FULLY CONFIRMS THIS REPORT, Hillary Clinton was indeed injured in Iran, the new report also shows that Obama has already named the new US Secretary of State: John Kerry, click here to read this new STUNNING REPORT: Obama Warned To Prepare For Hillary Clinton Death GD Star Rating. a WordPress rating system Clinton Injured, US Navy Seal Killed In Secret US Mission To Iran, 4.0 out of 5 based on 122 ratings UNCLASSIFIED U.S. Department of State Case No. F-2014-20439 Doc No. C05797628 Date: 02/29/2016 Related posts:

How would this be on Clinton's server? I don't see her email listed on there anywhere. I also didnt see that stated in teh article you linked.. did i just miss it?

deirdre said:
How would this be on Clinton's server? I don't see her email listed on there anywhere. I also didnt see that stated in teh article you linked.. did i just miss it?
Click to expand...

It looks like it was an email she received. Top of email chain under "To" it's addressed to just H
According to Wikileaks this was one of the emails from Clinton's server that was released Feb. 29th, that Wikileaks made available in searchable form on March 16th. I guess it's just now getting traction because of Clinton's health incident on 9/11.

Hillary Clinton Email Archive
On March 16, 2016 WikiLeaks launched a searchable archive for 30,322 emails & email attachments sent to and from Hillary Clinton's private email server while she was Secretary of State. The 50,547 pages of documents span from 30 June 2010 to 12 August 2014. 7,570 of the documents were sent by Hillary Clinton. The emails were made available in the form of thousands of PDFs by the US State Department as a result of a Freedom of Information Act request. The final PDFs were made available on February 29, 2016.

Marin B said:
the original EU times article being recirculated
Click to expand...

Seems pretty fishy...keep in mind "EU Times" is fairly notorious as an Infowars type of publication. The claims in this article are bordering Sorcha Faal-esque:

Upon closer inspection, however, it is little more than a regurgitator of news stories that paint blacks, Hispanics, and Jews in a bad light. Beyond that, it is a particularly unpleasant far-right blog with the information standards of InfoWars. The reporting is, without exception, shockingly unprofessional

the EU article Sorcha Faal article came out December 30 2012, yes? so there should be SOME correspondence in her email papers regarding an accident if there was one.
And.. are there emails from her during that 3 weeks she was "down" with brain damage?
Last edited: Sep 24, 2016

according to Snopes original source it IS sorcha who wrote the article? 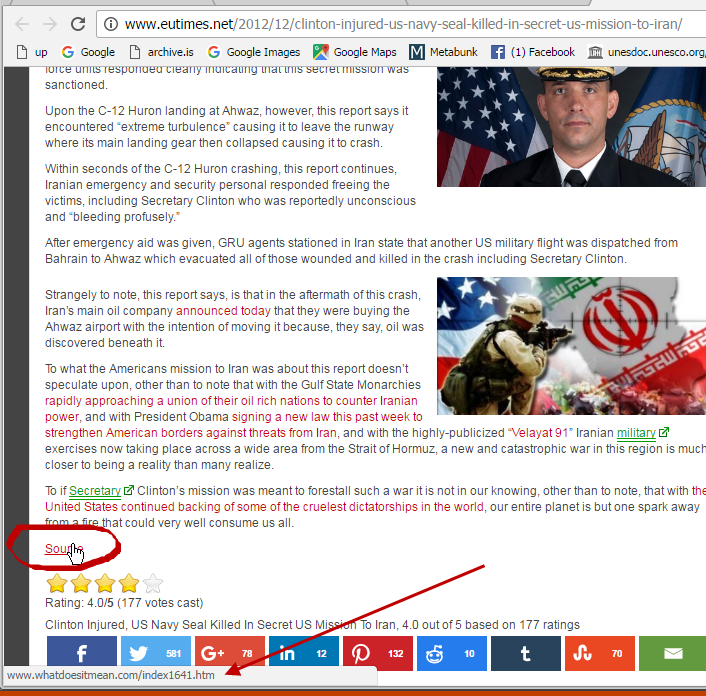 deirdre said:
the EU article Sorcha Faal article came out December 30 2012, yes? so there should be SOME correspondence in her email papers regarding an accident if there was one.
And.. are there emails from her during that 3 weeks she was "down" with brain damage?
Click to expand...

If you search concussion in wikileaks you get a couple emails, including one from Hillary asking someone (presumably an aide) to respond to an inquiry about her health.

Dear Hillary, Just a note to say I hope you are feeling better. I heard about the concussion and I was so sorry to hear about that. I'm sure it was a little scary. I hope you are resting well, and recovering comfortably.

Marin B said:
If you search concussion in wikileaks you get a couple emails
Click to expand...

i saw those. i just read all her emails from Dec 11th-Dec 30th. absolutely stimulating! (that's sarcasm).

I'm going through the clinton emails 2 days at a time from the beginning of Dec. 2012. There are various emails from HC up until Dec. 8th, and then there are emails on Dec. 10th and 11th from people wishing her a speedy recovery (clearly from a virus, not from a near fatal plane crash!):

So sorry to hear the Brussels bug got you down! Hope you feel better soon. Bill is headed back on the road to back you up, Tom is in Iraq and I'll work with others to keep home fires burning.

Please take good care of yourself, and hope you feel better. I'll do my best to fill in this week, and will keep you posted.

deirdre said:
i saw those. i just read all her emails from Dec 11th-Dec 30th. absolutely stimulating! (that's sarcasm).

But she doesnt sound like she has brain damage. Although she does kinda sound like she faked the concussion to delay the Benghazi hearings
Click to expand...

i guess we are spending our Saturday afternoon the same way. Fortunately I started with the beginning of Dec. and got up to the 11th. Good team work!
You must log in or register to reply here.

Oct 22, 2022
Nomad Research
N
U
The UAP Policy and Discursive Shift - Changing narratives on UAPs and its effect on policy.