This image was taken by Apollo 17 during its last flight to the moon near the area known as Geophone Rock. It was cataloged by NASA as "blank". After retouching the photo, you see that is not completely blank. If turning up the contrast, pyramidal structures can be observed. NASA has never given a credible version of the issue.

The photograph actually exists , and is the repository of images of the Apollo 17 mission at first glance seems to be veiled, but actually there are two structures: one with pyramidal and one in the bottom left that looks like a bar inclined. They are marked with orange arrows and yellow respectively. 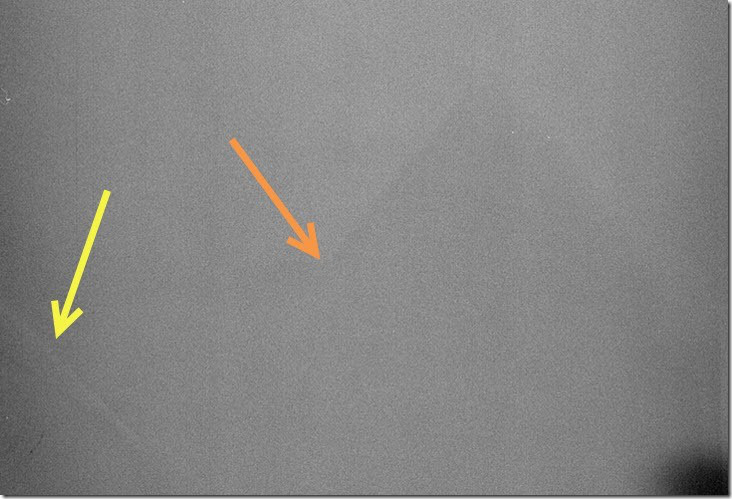 If the contrast of the image is enlarged, you can get the first picture of this article.

What can be the pyramid? Did the Egyptians also were on the moon by constructions like Giza? Or do they really did none of the two structures? Ah, as they like to believe this possibility! But let's analyze this data.

The Apollo 17 mission was the last NASA sent to the moon, specifically in December 1972 the crew of Apollo 17 was composed by Eugene A. Cernan , Harrison H. Schmitt and Ronald E. Evans . The mission carried a LRV (rover) with two seats in which astronauts could perform three extravehicular activities on the Moon, 7 hours each.

They had fixed the chest a Hasselblad camera that were taking pictures during the mission, so that allowed them to use both hands, if necessary. 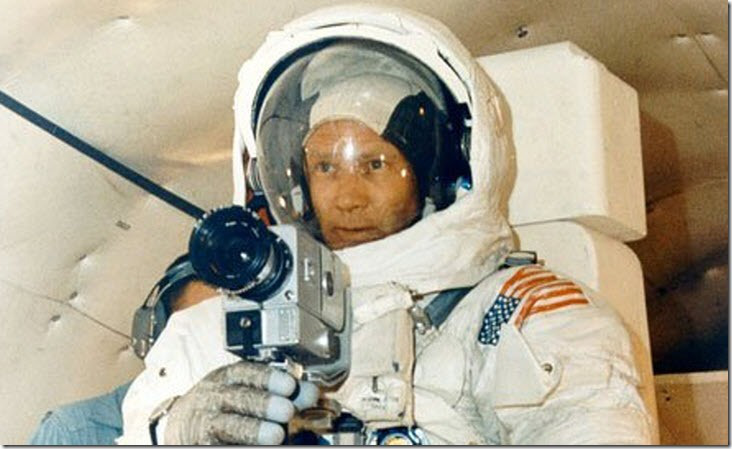 The film was tucked inside a cartridge (magazines) that were replaced when the movie ended.

Only brought back to Earth cartridges. During the Apollo missions were left on the lunar surface 12 Hasselblad cameras. Due to the manual transmission of the film, it was normal for a photograph at the beginning and end of each roll is watch.

All pictures of the Apollo 17 mission can be found at the NASA multimedia library . From this material, made a panoramic photo of the area where the lunar module landed where we can see that there is no pyramid structure, so we can get the Egyptian scene.

Looking at the first picture again, we can see that the pyramid is drawn in dark on a light background, it should be heaven. But ... on the moon there is no atmosphere, and therefore, as you can see in the panoramic photo I linked just above, all landscapes are silhouetted against a black background. It is impossible to be obtained a photograph of a structure like a pyramid and is cut on a clear sky.

The photograph is numbered AS17-135-20680, and NASA's own website it is unclear if the first photo cartridge H, or the last of G. In any case, the result is the same. It is evening.

Consider the sequence of pictures that come before and after. It is noteworthy that there AS17-135-20581 image as it is completely evening. Jumps from 80 to 82 The action takes place next to the rover. Cernan is changing the cartridge G (Golf) by H (Hotel) cartridge, so the camera points down. It can be seen as the last and first images from both cartridges appear evenings. Recall that the image is the last 20680 cartridge or the first of the Golf Hotel.

It seems evident that between the picture 79 and 82 which are pointing to the rover, the 80, which is the supposed pyramid is also pointing to the vehicle. The rover of Apollo 17 mission is this. It is in the same orientation as in the pictures we have seen. 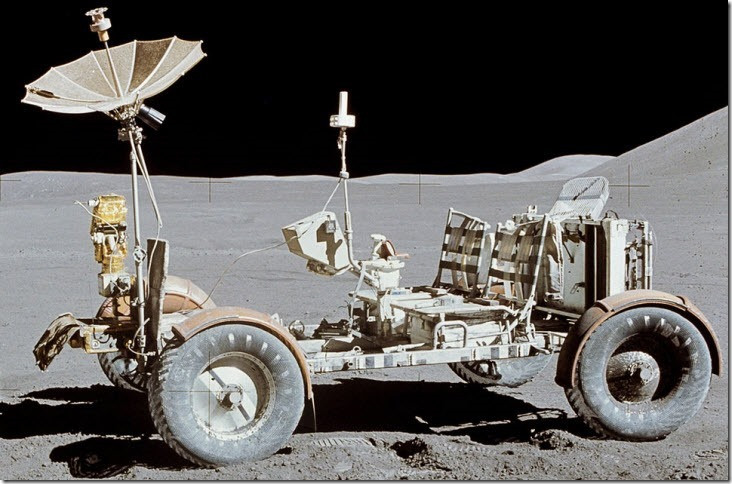 The astronaut Cernan exactly up to the vehicle frame 80 though we were seeing in this last picture, I would back to us. You can see the grated floor to the right, and the seats on the left. In the picture below, I compare an enlarged section of the rover with what can be seen in photo 78 Arrows of the same color are used to identify parts in one and another photo. What bars appear in photographs of Apollo, are really leashes. If you look can check for buckles to tighten them. 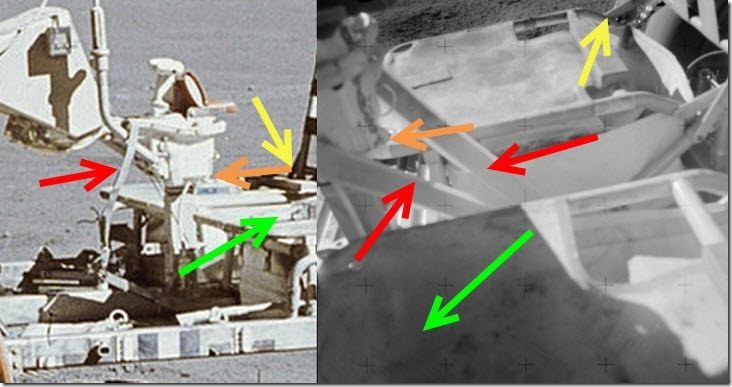 And again reviewing the animated sequence, and after checking what spaceman up position because it is mounted on the rover, we can say that the mysterious pyramid is ... 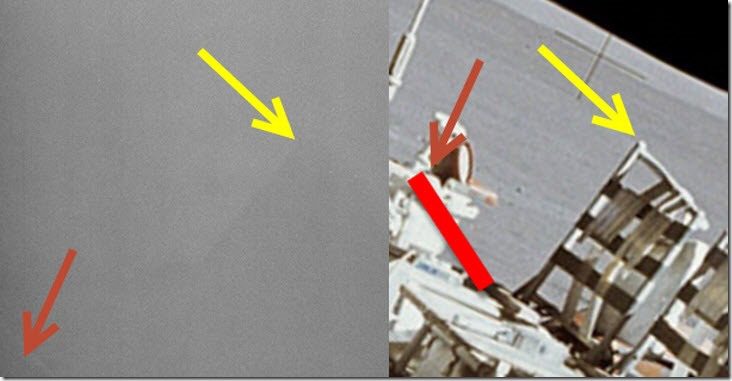 Beautifully done. I like everything and anything Apollo-related. (Sort of a passion of mine).

lamentiraestaahifuera.com said:
And again reviewing the animated sequence, and after checking what spaceman up position because it is mounted on the rover, we can say that the mysterious pyramid is ...

That suggests the pyramid is the corner of the seat back, but that does not make sense to me, as the seat back is not solid. Seems more likely it's a shadow on the seat or the floor, with the camera looking down.

I have increased the bright and reduce the contrast and this is the result. It can be appreciated only the edges with the highest contrast.
This is the only possible explanation to the AS17-135-20680 picure. Mind the other figure that can be identified in the lower left corner.

I think its 20682. they just stepped closer to the 'seat or whatever that black thing is. 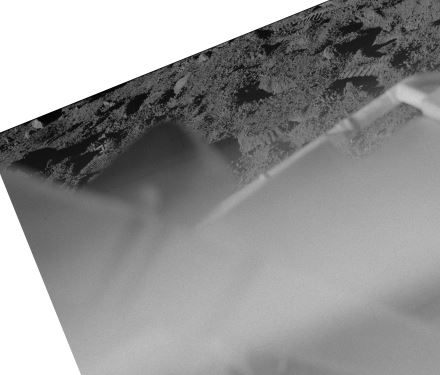 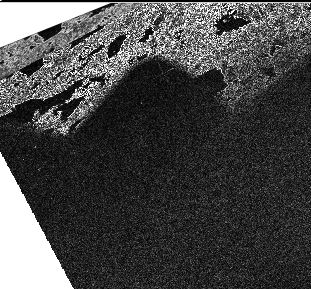 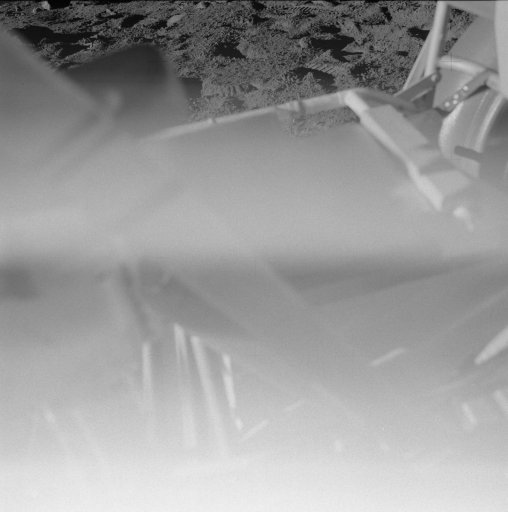 The pyramid is not a rovers seat. I overlapped 2 images and scaled the rover so the seat corner is exact dimension of the pyramid and as you can see the red line showing the second pyramid way out of frame. 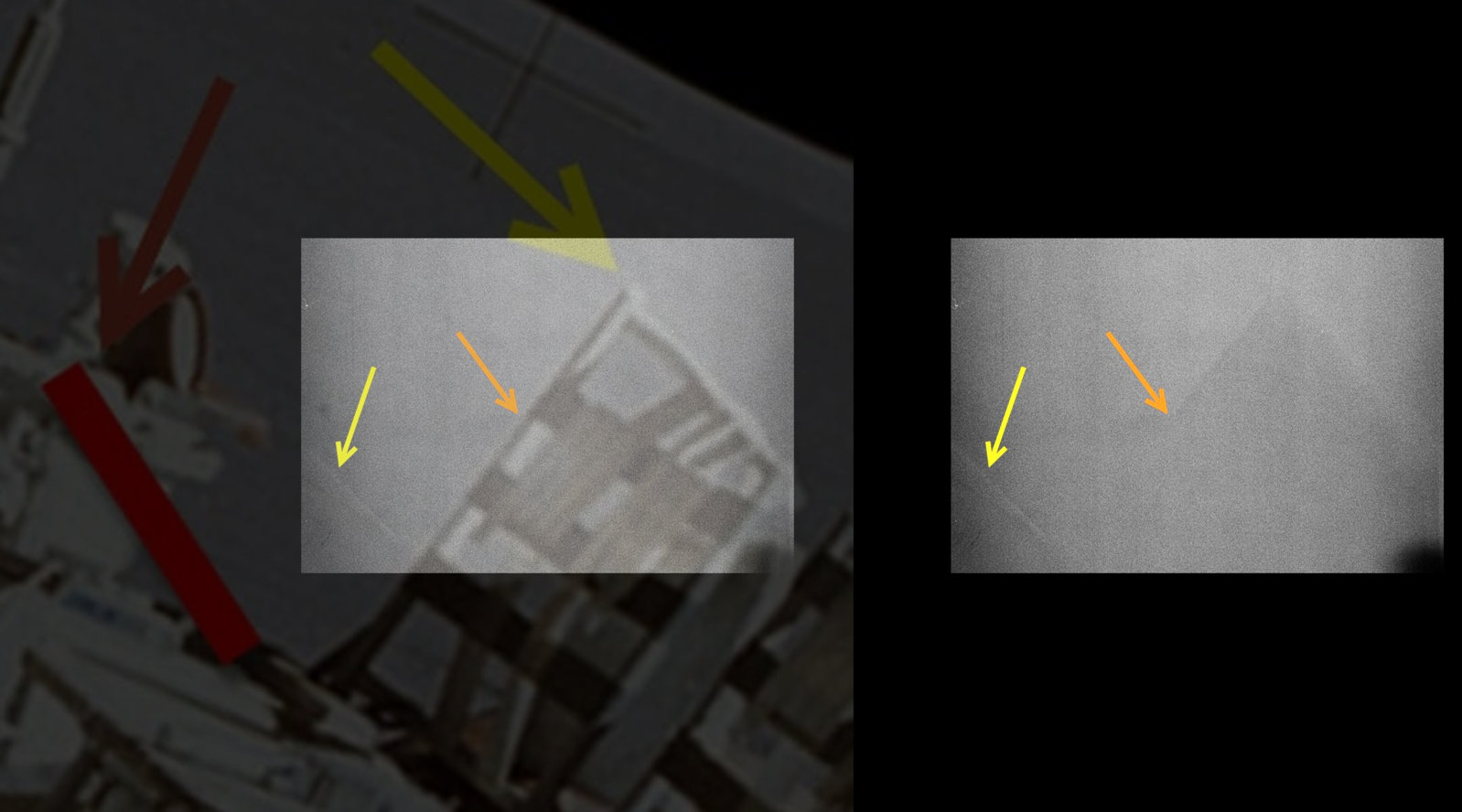 I think Mick was closer. The rest of the shots before AND after, he doesn't appear to move much. So it appears no more likely that he would suddenly stand up straight and take a photo of the seat upright and go back to taking photos bent over, than that he did the same thing with an actual moon pyramid structure.


"Hey Gene, don't you think we should take some photos of that FUCKING GREAT PYRAMID STRUCTURE?"

"Don;t worry, Ron, I got one while I was changing the films over"
"Just the one? what if it doesn't come out?"

"Don't worry about it, it's not like it's at all important or anything"

You're assuming a couple things: First, that the angle of the photograph was the same- (stepping slightly to stage right in the left picture would rotate the red marked bar to the angle of the second "pyramid." Second, with only one point to work with (the seat corner), you've chosen an arbitrary scaling. The edges of the seat give you alignment, but the other ends of both edge are lost in the shadows and the only other point of reference is the second "pyramid." It takes two points at least to match the scale.

Expanded as in the attachment, the edges of the seat still match, but the bar does as well, slightly out of alignment because of the angle, but at the right visual distance from the peak.

and then cover it up?

Is there a term for when one conspiracy shoots down another?

Hi Mr. Data. If you simply move a step to the left you will have the same view. It is impossible to get another picture from the mission with exactly the same position. But the only object with this shape in the scene is the sit back. What else it could be in your opinion ?

Whitebeard said:
Is there a term for when one conspiracy shoots down another?
Click to expand...

Whitebeard said:
I like these conundrums... if that is a

Dang it, you beat me to it.
I was about to write pretty much the same thing.
R

Hi I don't really care if there are pyramids on the moon, but this photo comparison does not disprove it. The chair on the right has webbing which is not represented in the photo on the left. It is impossible that we would be shown the image on the left but not see the changes in contrast which are caused by the webbing. The left pole of the chair is only 1" wide so we would see this apparent in the hazy image above. I am not saying it is not a picture of another part of the structure but certainly it is not this webbed chair back. Also the extremely black top right corner of the image is not shown on the left. The items left of the chair back also do not represent the grey photo
You must log in or register to reply here.

Apollo 12 photo: Is this censorship?