Except that's not true. The victims were in that area, and there isn't just mention of them, but images and video of them.

This was a single gas based weapon deployed in open air, not enclosed environments like the subway attack in Japan or the immense chemical attacks of WWI involving many tons of chemicals. For some comparison, despite the volume of chemical weapons used in WWI, only 90,000 people were actually killed by them, while millions were exposed. The world didn't step up to end the use of chemical weapons because of the horrors a single one can cause, likewise they aren't classed as weapons of mass destruction because of the volume of destruction they cause, but by its indiscriminate nature.

tell you what.. please don't post every [very] wild speculation you run across on the internet in this thread. If Postol comes up with any actual evidence, meaning how he determined wind direction, then you can post that. While this is the Current Event forum, gish galloping without actual evidence is still not allowed.


In my earlier report released on April 18, 2017 I misinterpreted the wind-direction convention which resulted in my estimates of plume directions being exactly 180° off in direction. This document corrects that error and provides very important new analytic results that follow from that error

When the error in wind direction is corrected, the conclusion is that if there was a significant sarin release at the crater as alleged by the White House Intelligence Report issued on April 11, 2017 (WHR), the immediate result would have been significant casualties immediately adjacent to the dispersion crater.

The fact that there were numerous television journalists reporting from the alleged sarin release site and there was absolutely no mention of casualties that would have occurred within tens to hundreds of meters of the alleged release site indicates that the WHR was produced without even a cursory low-level review of commercial video data from the site by the US intelligence community. This overwhelmingly supports the conclusion that the WHR identification of the crater as a sarin release site should have been accompanied with an equally solid identification of the area where casualties were caused by the alleged aerosol dispersal. The details of the crater itself unambiguously show that it was not created by the alleged airdropped sarin dispersing munition.

These new details are even more problematic because the WHR cited commercial video as providing information that it used to derive its conclusions that there was a sarin attack from an airdropped munition at this location.

As can be seen by the corrected wind patterns in the labeled photographs on the next page, the predicted direction of the sarin plume would take it immediately into a heavily populated area. The area immediately adjacent to the north northwest of the road is may not be populated, as there was likely heavy damage to those homes facing the road from a bombing attack that occurred earlier at a warehouse to the direct east of the crater (designated on map below). However, houses that were immediately behind those on the road would have been substantially shielded from shock waves that could have caused heavy damage to those structures.

I think it is important to include other portions of the Washingtonsblog article:


Since the reported wind speeds were very low, and the area is densely packed with buildings, a sarin dispersal would certainly not have simply followed a postulated plume direction as shown with the blue lines in the map below. Sarin aerosol and gas would have been dispersed both laterally and downwind by building fronts and would also have been dispersed downward and upward as the gases and aerosols were gently carried by winds modified by the presence of walls, space ways and other structures. A purely notional speculation on how a sarin plume might be dispersed by the structures as prevailing winds push the aerosol and gas through the structures is shown in the figure at the bottom of page 4.

The complicated wind pattern inside the densely populated living area would have resulted in sarin accumulating in basements and rooms that are roughly facing into the wind. There would also have been areas in spaces between buildings where sarin densities were much higher or much lower as the gentle prevailing winds moved around corners and created pockets of high and low density sarin concentrations.

Even using Postol's own writing, I don't see how he can come to clear conclusions.


I also don’t see how the location of a dead goat is relevant as evidence. 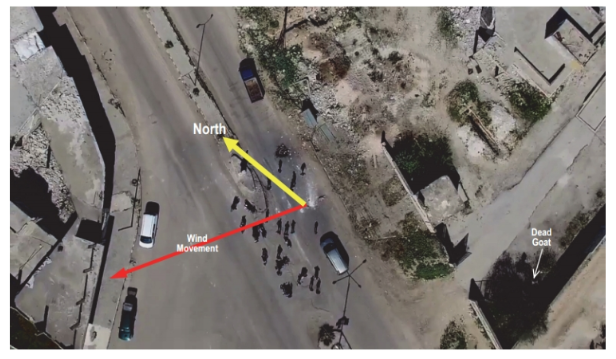 Postol even offers a caveat about the goat:


If one instead guesses that the goat might have been wandering around and had wandered into the path of the newly dispersed sarin, the goat should have been found on the ground near the release point as the sarin dose within the plume would have killed it very quickly.

In other words, Postol is still speculating about the conditions of the attack.

These new details are even more problematic because the WHR cited commercial video as providing information that it used to derive its conclusions that there was a sarin attack from an airdropped munition at this location.


I think it is important to point out that US officials will cite open sources when talking about any national security issue. They will not, however, discuss existing sources and methods for collecting intelligence information.

That is routine practice. We will likely never get a complete idea of American intelligence on this particular issue.

MikeG said:
I also don’t see how the location of a dead goat is relevant as evidence.
Click to expand...

well it is relevant as evidence but not in the way Postol wants it to be. I guess goats running when a missile flies in from the sky never crossed his mind.

Hevach said:
Except that's not true. The victims were in that area, and there isn't just mention of them, but images and video of them.
Click to expand...

Can you provide some evidence of that? thanks

MikeG said:
I think it is important to point out that US officials will cite open sources when talking about any national security issue. They will not, however, discuss existing sources and methods for collecting intelligence information.

That is routine practice. We will likely never get a complete idea of American intelligence on this particular issue.
Click to expand...

But that is irrelevant as the Trump administration could be lying. Otherwise we could use this argument all the time. Saying..."there coyld be other evidence that is being deliberately hidden."

william wiley said:
But that is irrelevant as the Trump administration could be lying. Otherwise we could use this argument all the time. Saying..."there coyld be other evidence that is being deliberately hidden."
Click to expand...

I am not offering the statement about intelligence sources as an argument. It is offered as a fact regarding current practices.

In other words, we simply don't have all the relevant information that is available to policy makers.

The Trump administration could be lying. Or, it could be telling the truth.

I don't think it does much good to plug in a personal bias and speculation into the gap created by incomplete information.

That is essentially what Postol is doing, over and over again.

Skepticism is not evidence.

This is an interesting video from the New York Times in which they point out several inconsistencies of both the Russian and Syrian government claims about where and when the attack occurred. It does not place blame but it does make a convincing case that both Syria and Russia have distorted facts. The video is 7 minutes long and worth a watch:


Claim 2: (2:38) What was hit
Igor Konashenkov "syrian aviation launched a strike in the eastern outskirts of Khen Sheikhoun town on a large terrorist ammunition depot."

(3:00) satellite match ups before and after attacks verify buildings that were hit. No large depots. small buildings, homes 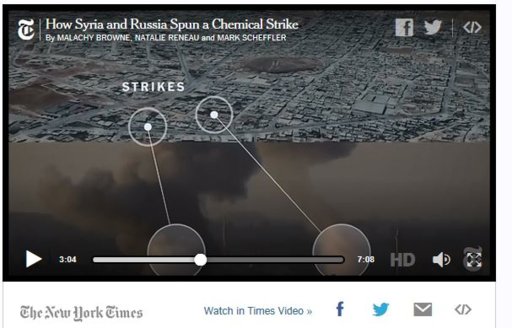 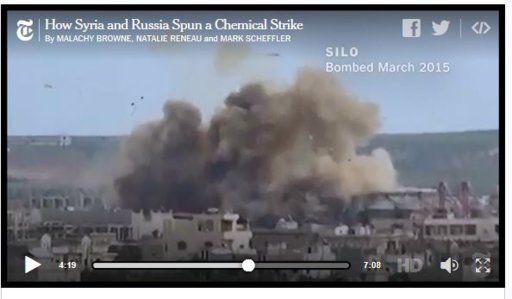 Claim 3: (4:59) Syria has no chemical weapons
"no, no definitely, a few years ago in 2013 we gave up all our arsenal" Assad
But 'Organization for the Prohibition of Chemical Weapons' contradicted that. Ahmet Uzumcu "clearly we cannot say that Syria doesnt process any chemical weapons anymore" ]

Here is a relevant article based on the declassified French intelligence report:

Based on this overall evaluation and on reliable and consistent intelligence collected by our Services, France assesses that the Syrian armed forces and security services perpetuated a chemical attack using sarin against civilians in Khan Sheikhoun on 4 April 2017.

Staff member
This thread seems to have become necessarily speculative, and is no longer really appropriate for a current events discussion. Please continue via PM, or in a more focussed thread following the posting guidelines.
You must log in or register to reply here.