Moore, Oklahoma tornado caused by HAARP According to Some Conspiracy Believers

I'm beginning to think weatherwar is more delusional that Dutch.

In which this stormy wizard person claims that tornado did not rope out or lift up but was instead hit by a massive beam - and then later in the video, at approximately the 13 minute mark, they show the tornado doing EXACTLY that....roping out.....only they are using it show an imaginary vertical energy pulse "terminating" the storm. Just another example of these types of people contradicting themselves and each other and also twisting images, videos, or technical data in whatever way is necessary to suit their theories.

And yet another example of someone not understanding you cannot see a transmitted pulse without over-saturating the radar receiver or destroying it. They just can't seem to grasp onto the fact that radar imagery is the transmitting station's reflected energy, or in the case of some anomalies, intercepted energy of a similar operating frequency from another source. That faint "beam" in the video that they claim "terminates" the storm lines up perfectly with the Vance, AFB WSR-88D.

rather funny comment by Russ Tanner on last Monday's Global Skywatch conference call. Tanner falsely believes that there is some way to control tornadoes. He doesnt go so far as claiming the Moore tornado was caused, but his belief prompted him to claim that he tornado "should have been stopped". Essentially, he is advocating control of weather, if it is beneficial.

Perhaps he has grown to accept things, or maybe the chems have finally taken effect and he has gone over to the dark side.

Not a single person in the group noted the inconsistency, they all remained mute.

Here is Scott Stevens take on the Moore Tornado:

I made some comments about that video in the Scott Stevens debunked thread:

Long story short, he says some things that he should absolutely know are false.
Last edited by a moderator: Nov 20, 2013

scombrid said:
I made some comments about that video in the Scott Stevens debunked thread:

Long story short, he says some things that he should absolutely know are false.
Click to expand...

Keep your eye out for new theories, as there is again increased potential for large tornadoes in and around the Moore area today. Poor folks cannot catch a break.
Last edited by a moderator: Nov 20, 2013

Drew said:
After digging into some of the other threads around here, I see that Kevin Martin and his site have been referenced a couple of times, especially in conjunction with spats he has had with DutchSince. I'm specifically curious about this "haarpstatus" image, what it's supposed to be displaying, and what sources of data he used to make it.
Click to expand...

Kevin Martin was posting for a while on Chemtrails Global Skywatch. Someone kept posting that his site was phony, he was lying, etc etc, till they all ran him off.

plane852 said:
Keep your eye out for new theories, as there is again increased potential for large tornadoes in and around the Moore area today. Poor folks cannot catch a break.
Click to expand...

Guaranteed, Makes me sick. As I am watching, there is a rain wrapped tornado near OKC that is verifiable only via NEXRAD, and with the dual polarization upgrades, it is much easier to tell exactly where the tornado is and if it is still on the ground. Critical, life saving equipment but it will be accused of malicious intent once again.

Right on schedule as the weather situation worsens..... 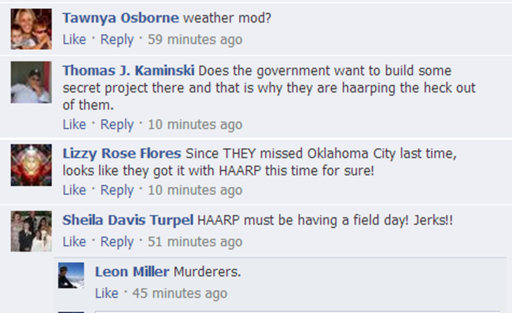