This is the part of the press conference where Stirling discusses timestamped parts of the videos that were shared. I have tried to sync up the relevant clips.

Gabriel Sterling, the voting system implementation manager in Georgia, held a press conference today; he gave some information regarding the current elections, debunked some claims, and asked Georgia voters to not "self-suppress" their vote by deliberately not voting.

Partial transcript, heavily excerpted, as overview of the contents of the video:

14:04 State Farm
14:29 If you go to securevotega.com, we have posted all the videos from State Farm for that day. [at https://securevotega.com/factcheck/ , caution: server may be lagging]
18:35 claim ... multiple scanning
18:58 hand re-tally ... audit
19:44 we put all of these tally sheets online, for every county, so people can look at them ... securevotega.com
19:56 Let's go over the numbers the president's team is claiming
20:00 they're claiming there were 2056 felons that voted ... our data .. upper bound of 74 potential people who are felons voted ... it's going to be lower than that
20:40 Then there's the claim that 66,248 people below the age of 18 voted; the actual number is zero (0).
21:10 They say there's 2423 people who voted without being registered. Let's just be clear about this: you can't do it: there can't be a ballot issued to you, ... that number is zero (0).
21:30 [claim:] 1043 illegally voted using a P.O. box ... you have what looks like P.O. boxes listed in the system, but they're actually the residential address of record for people who live in multi-family housing, like apartments ... we haven't seen anyone actually registering to vote at a USPS P.O. box
22:01 next [claim] is "4926 voters past the legal voter registration deadline", again, it's zero (0)
22:20 [claim:] "10,315 who died before the election" .. so far, our information ... shows potentially two (2), it could change, but it's not ten thousand
22:35 [claim:] "395 cast ballots in 2 states" ... we're investigating that
22:59 not nearly enough ballots [under investigation] to change the outcome
23:30 [claim:] "dominion voting machines using fractional voting or flipping votes" .. the hand tally shows none of that is true
24:55 signature matching ... claims ... not being done .. no specific evidence was ever brought up until, in one of the Trump filings, there was a specific allegation: the signature verification was not being done on the absentee ballot request form properly in Cobb County during the June primary. ... we got GBI .. the outcome .. of the 15,118 absentee ballots they investigated, they found two (2) with potential problems ... and of those two, the ... voter who was ... marked as voting was the actual voter
26:05 [claim:] "vast difference in rejection rates" ... there was not a vast difference in rejection rates ... comparing apples to oranges .. in 2019, H.B. 316 was passed, which allowed there to be curing of ballots
27:09 about 5000 total ballots were rejected for some purpose, and about 2600 of those were cured
27:29 there is no shredding of ballots going on ... shredding of unused envelopes ... shredding of secrecy envelopes .. no evidentiary value
28:05 no-one is changing parts or pieces out of Dominion voting machines
28:24 Secretary Raffensperger does not have a brother named Ron Raffensperger
28:42 [claim] hacking of dominion equipment ... ballot marking devices and scanners [don't] have modems ... the poll pads have wifi ... zero proof
29:40 this office was never invited to come and discuss these items with the State Senate subcomittee
29:53 undermine people's faith in the system
30:02 [claim] "thousands and thousands of fake ballots in Fulton County warehouse" ... these are the emergency ballots that have been sitting in that warehouse since before the November election, in plain view ...
31:55 ... disinformation ... lots of bots .. foreign powers...
32:14 "pristine ballots" .. 3 reasons you can have a pristine ballot ... 1. military and oversees voters ... electronic ballot delivery ... they print it ... not sized properly to go through a scanner ... the county ... will duplicate that on a flat, unfolded piece of paper, on the absentee ballot/emergency ballot. [2.] emergency ballot situation ... when a device goes down ... in the morning in Spalding County ... scanned directly into the machine and not folded [3.] ... damaged or adjudicated ballot ... duplication

This took way too much time to transcribe; I recommend watching the video if you want to see someone who knows what they're talking about debunk and explain election issues. It's a pleasure.
Last edited by a moderator: Jan 4, 2021

This is the chart visible in the press conference video. 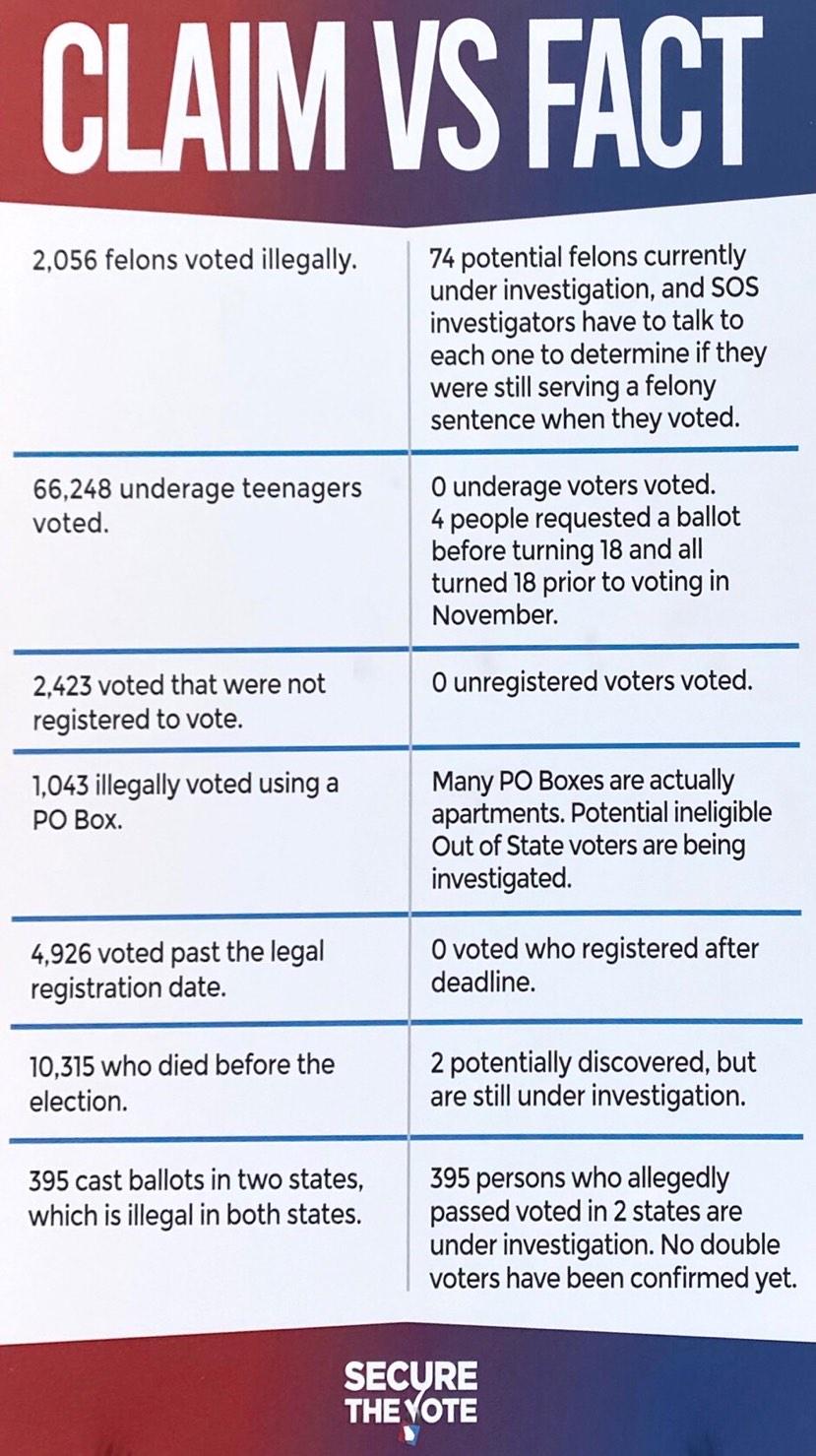 Gabriel Sterling walks 60 Minutes though surveillance footage from Fulton County taken the night of the 2020 Presidential Election.
Because Sterling is commenting on the footage directly, his explanation is more detailed than it was at the press conference that Mick used for his post #1.
Source: https://www.youtube.com/watch?v=pjKXvqSNIkk
You must log in or register to reply here.