VIDEO showing a smoking crater next to a motorway has lead to speculation it could be a UFO crash site.
https://www.express.co.uk/news/weird/908155/Burning-hole-crater-Mexico-UFO-aliens-meteor 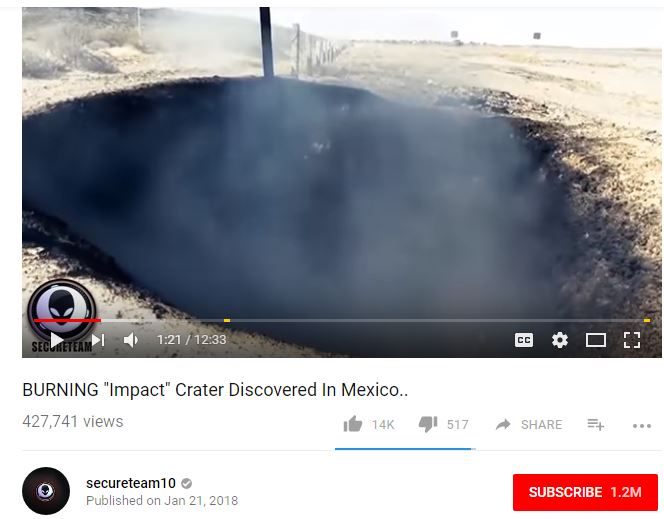 Basically an 8 meter hole was found in Torreon, Mexico. There are many guesses going around (mafia burning guns, meteorite, UFO) but according to Spanish news it is a garbage pit. This news was posted 6 days ago, but apparently no one has translated the news to English. so...

Minutes later the authorities reported that a smoke plume came out of the hole, then confirmed that the smoke was caused by some used tires burning inside.

That evidence led the elements of Civil Protection to conclude that the sinkhole was actually a clandestine garbage dump where residents of the area brought their waste to be incinerated.

Víctor Alardín, commander of firefighters of San Pedro, indicated that his team carried out investigation in the zone to know the origin of the tunnel and that soon they discovered that the ejidatarios of the communities of the Virgin and the Sun were the culprits of the burning of trash.
http://noticieros.televisa.com/hist.../crater-humeante-asombra-habitantes-coahuila/


Given the proximity of the place where the hole originated, elements of Fire, Coahuila Force and Civil Protection of San Pedro, as well as the Federal Police, who located in a depopulated land a huge sinkhole of approximately 8 meters in diameter and 8 deep .

The authorities reported that a smoke column actually came out of the hole, because inside there were some burning tires and it could be a garbage dump.

The commander of firefighters of San Pedro, Víctor Alardín confirmed that it went to the nearby populations to investigate the origin of the tunnel.

Civil Protection of Parras confirmed that the ejidatarios of La Virgen and El Sol, carry out the burning of garbage of the settlers, for which they were recommended to refrain from doing so.

Alarm
A large hole, on the road to Saltillo provoked police mobilization, because they said it was a crater of a meteorite.
⇒ It was confirmed that it was garbage dump.