can you explain what am I looking at these pictures?

There is data about couple bluray discs, also including in some folders the *.RW2 file format.

Here is couple of them zoomed and united some of the most best particles.

The camera is Panasonic G10 and is set to manual focusing so only the most close objects are focused properly: the "angelorbs" which are just round balloons, are objects "out of focus". 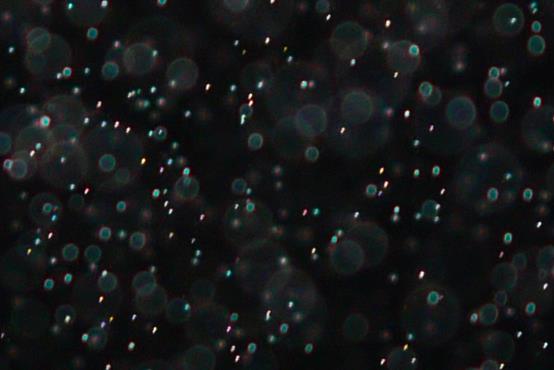 What's the connection to 'chemdust fallout'? What is the claim made about the pictures?

I might preempt any possible claims about airborne dust by mentioning that there seems to be very little public understanding of how common bacteria and viruses are in the atmosphere.
From online discussions I suspect quite a lot of people get their ideas from watching tv commercials for disinfectants with animated cartoon "bugs"... bacteria with faces etc, usually 10 or so getting wiped away screaming by by a cleaning cloth with new advertised product, and the perception is that the surface will now be bacteria free untill perhaps days later?

In reality every cubic metre of air naturally contains between 1.6 million to 40 million viruses, and between 860,000 to 11 million bacteria

The second you finish wiping a surface "clean" it will be re-colonised by tens of thousands of bacteria from the surrounding air.

Natural "fresh" air is full of trillions of living airborne particulates. plus numerous types of dead or mineral inorganic particulates.


If the guy has "discovered" through a carefully staged photographic technique that the sky is full of small, normally invisible particulates then good on him for experimenting but it's no surprise to science.

Yes, some of the pictures seem to have similar formation of a cell: even a clue of the nucleus inside the cell.

Why I refer them as "chemdust" which is kind of illogical term, if we referr to the theory of aerial dispersion of metals in order to make rain: is couse of the particles reflect light so much, that they seem to be like little mirrors.

If you zoom the pictures with water vapour, you do not find those different colour of particles at all, but is is mostly whitish/grey particles: nothing similar to those "mirrorparticles".

Here is one of the best pictures of those "mirrors": http://misc.bonekobrothers.com/ilmastonmuokkaus/kuvat/8.9.2014/P1030154.JPG


If you have time to see all the pictures on BB-server, you find also testpictures when there is fog and also pictures of water vapour from breath: those particles are not similar that I present of reflecting light.

Here is a cool picture of water vapour that came out as rainbow: 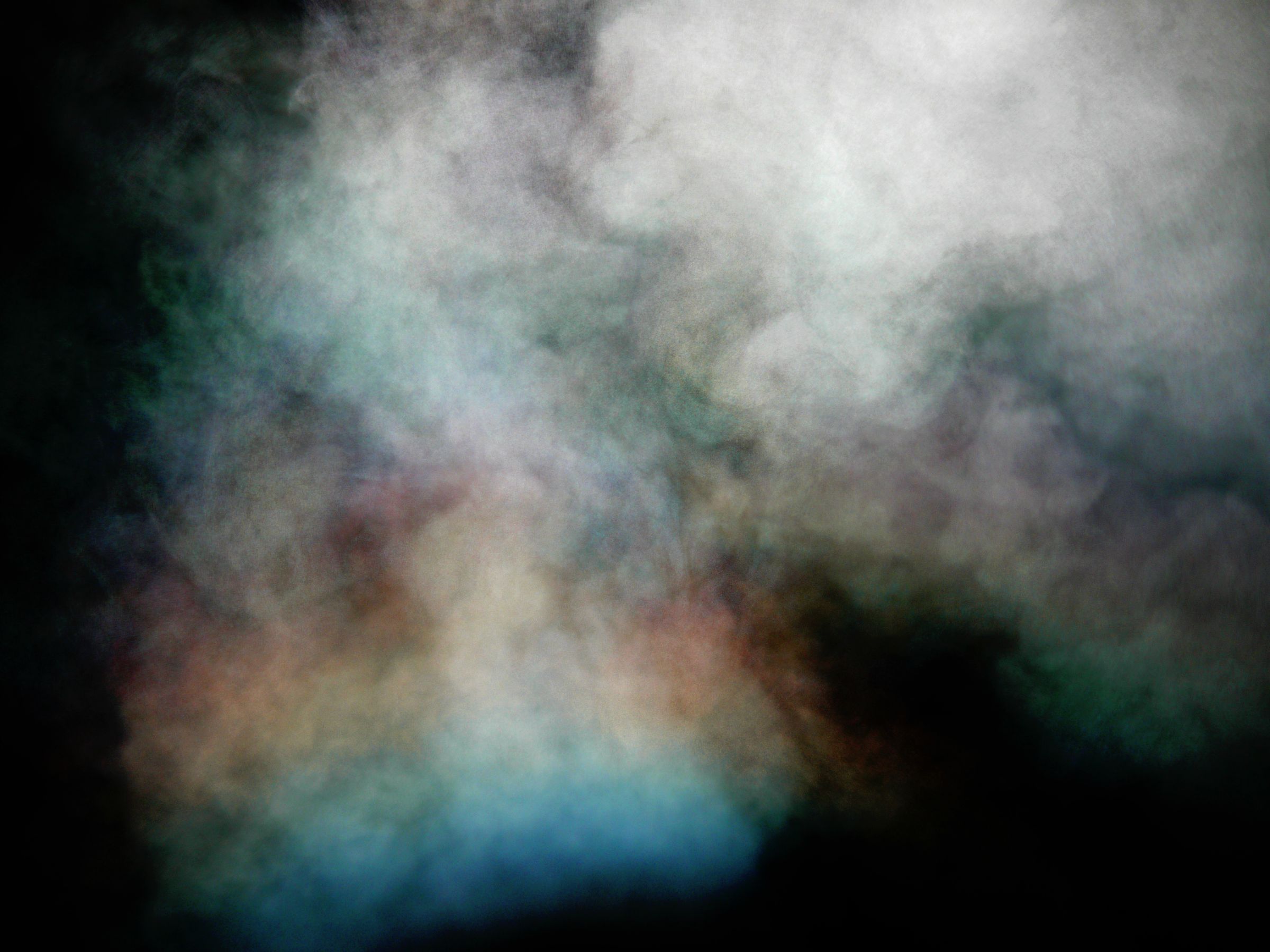 
I do note, though, that on your "Chemtrail" page on Facebook (https://www.facebook.com/notes/783842431703895/)
you seem to be attempting much more of an explanation than you're
giving us on this thread...you seem to have your mind made up there...
could you please (on this site) more explicitly state what it is you're claiming?
Last edited: Jan 25, 2015

Sorry , but you seem to be under a significant misconception.
It is impossible to take photographs of water vapor.
Water vapor is an invisible gas.

What you can photograph however is water condensation.. in the form of liquid water droplets or ice crystals.
It would help your understanding greatly if you looked over phase change in water.

Cloud seeding involves metal salts like silver iodide. You should be familiar with another metal salt... you add it to french fries... Sodium Chloride aka table salt.

"the "angelorbs" which are just round balloons, are objects "out of focus"."

You are refering to the very common photographic phenomenon known as "circles of confusion" or more popularly.. "bokeh"

Here's a vid explaining circles of confusion:
http://www.picturelikethis.com/blog/bokeh-dots-take-a-picture-like-this
As you can see the internal cellular structure often seen in bokeh is not actually something present in the object but aberration in the optics.

NoParty I would like to discuss this as the evidence of only the pictures, not of my own theory about what they are.

What is your opinion of what they are?

GregMc your links presents lights that are out of focus.

That "angelorbs" in your links thing are just reflecting light: it is not the same.

I happen to have a picture of my own of that, these are LED lights where I just zoomed them "out of focus": 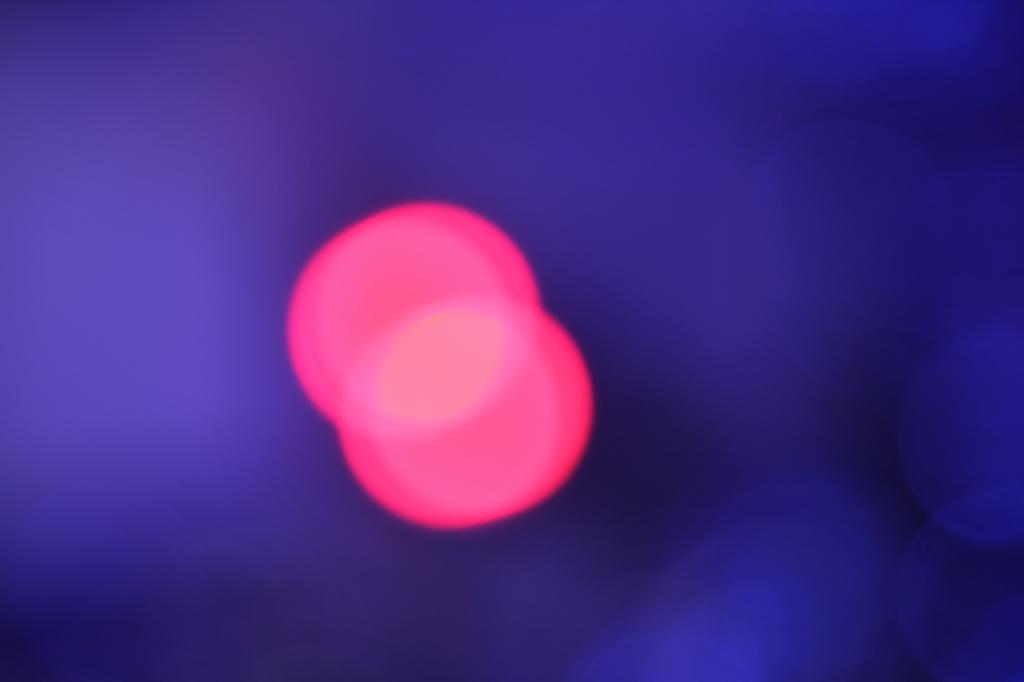 What's your process for taking the pictures?
And they all look like out of focus circles or bokeh to me. Can you point to one that's a good example of what you think isn't bokeh?

WhiteTiger said:
your links presents lights that are out of focus.

That "angelorbs" in your links thing are just reflecting light: it is not the same.

I happen to have a picture of my own of that, these are LED lights where I just zoomed them "out of focus":
Click to expand...


You seem to not understand that with circles of confusion in optics it makes no difference whether the object out of focus is reflecting light or is generating light like an LED. It makes zero difference to the optical physics of the bokeh circle.


Can you tell us what you remember about phase change in water from high school?
I get the impression from your facebook page that you haven't grasped that when water evaporates it becomes water vapor.

Water vapor cannot evaporate because IT IS the evaporated state of water.


BTW your webpage shows a number of aerodynamic contrails which create an iridescent coloured effect due to mie scattering of light caused by growing ice crystals.
http://www.pa.op.dlr.de/~pa1c/JAS66_227-243_2009.pdf

I've noticed references to colour in clouds on other chemtrail adherent pages and there seems to be a general idea that they must be because of "chemicals" because oil is thought of as an "un-natural" chemical and it forms colours sometimes (when a thin film of it floats on water ) .
I think the thought process goes "oil is a chemical.. I've seen oil produce rainbow colours , therefore chemicals produce rainbow colours .. therefore if I see rainbow colours its because of chemicals.."
Ironically , when oil is used deliberately to produce smoke as a fine aerosol it doesn't make colours.
(Skywriters and some types of aerobatic smoke use oil pumped into engine exhaust manifolds to make smoke.)
Interesting when people only familiar with the common colourful phenomenon of thin film interference from oil slicks on water try to attribute a phenomenon they don't understand anyway to everything that resembles it. http://www.explainthatstuff.com/thin-film-interference.html

When all you have is a hammer, everything looks like a nail
Last edited: Jan 26, 2015

WhiteTiger said:
can you explain what am I looking at these pictures?
Click to expand...

all i get from your link is this:

zoomed in on abunch of pics and dont see anything like your photos.. which file and jpg number are they?

ps you were picked up by alex jones Facebook... so kudos! 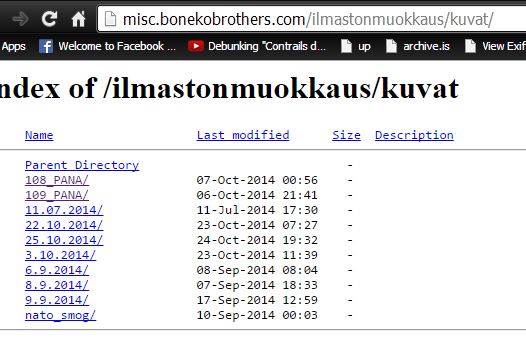 can you explain what am I looking at these pictures?

As @GregMc and others have already said, you are looking at out of focus images of dust particles. Even your "best particles" are out of focus, not just "angelorbs".

You could have done a much better job by collecting suspended in the air dust particles on sample plates and looking at them under a decent microscope with a good magnification.

Also in his photos we are seeing onion ringing effect fairly typical of camera optics that have aspherical components
http://www.imaging-resource.com/new...-panasonic-beats-the-curse-of-aspheric-lenses
With some chromatic aberration to boot (colour shift)
https://photographylife.com/what-is-chromatic-aberration

GregMc said:
Ironically , when oil is used deliberately to produce smoke as a fine aerosol it doesn't make colours
Click to expand...

Just to add to this point. Stage smoke machines produce colourless smoke which is then coloured by the lights or lasers shining through the cloud 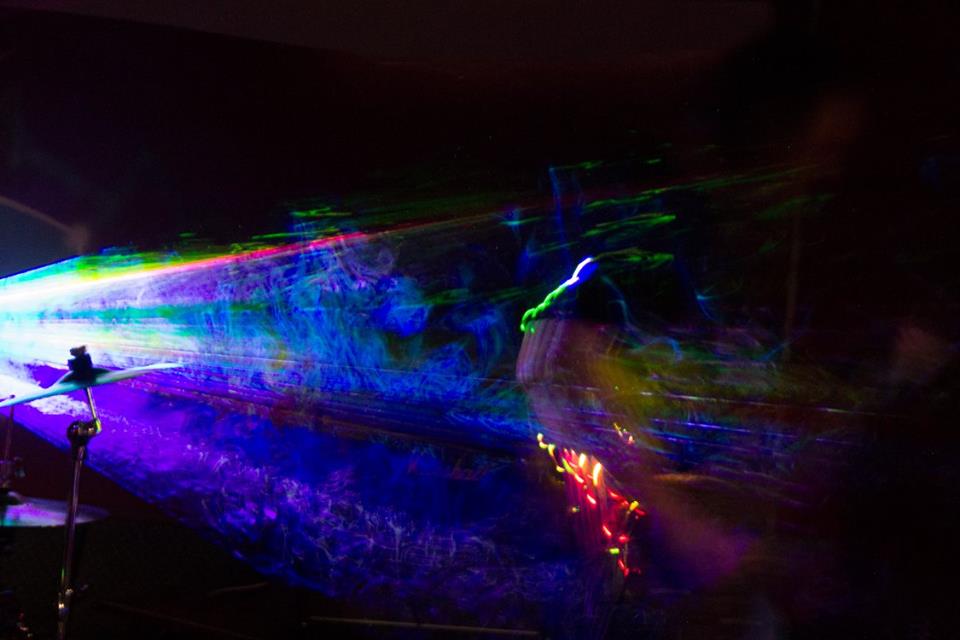 It's impossible to reach to any conclusions if you don't have the full scenario. It's like looking a low resolution photo of an event an conclude there is a big conspiracy going on because things are a little odd.

If we look the images at the OP, they really don't mean anything if you don't have the rest of the context. Like @Pete Tar was asking: Where were they taken? How were they taken? What was done to the image itself to enhance the details?

For example: if I create a thread asking the opinions on what's this, can anyone answer? 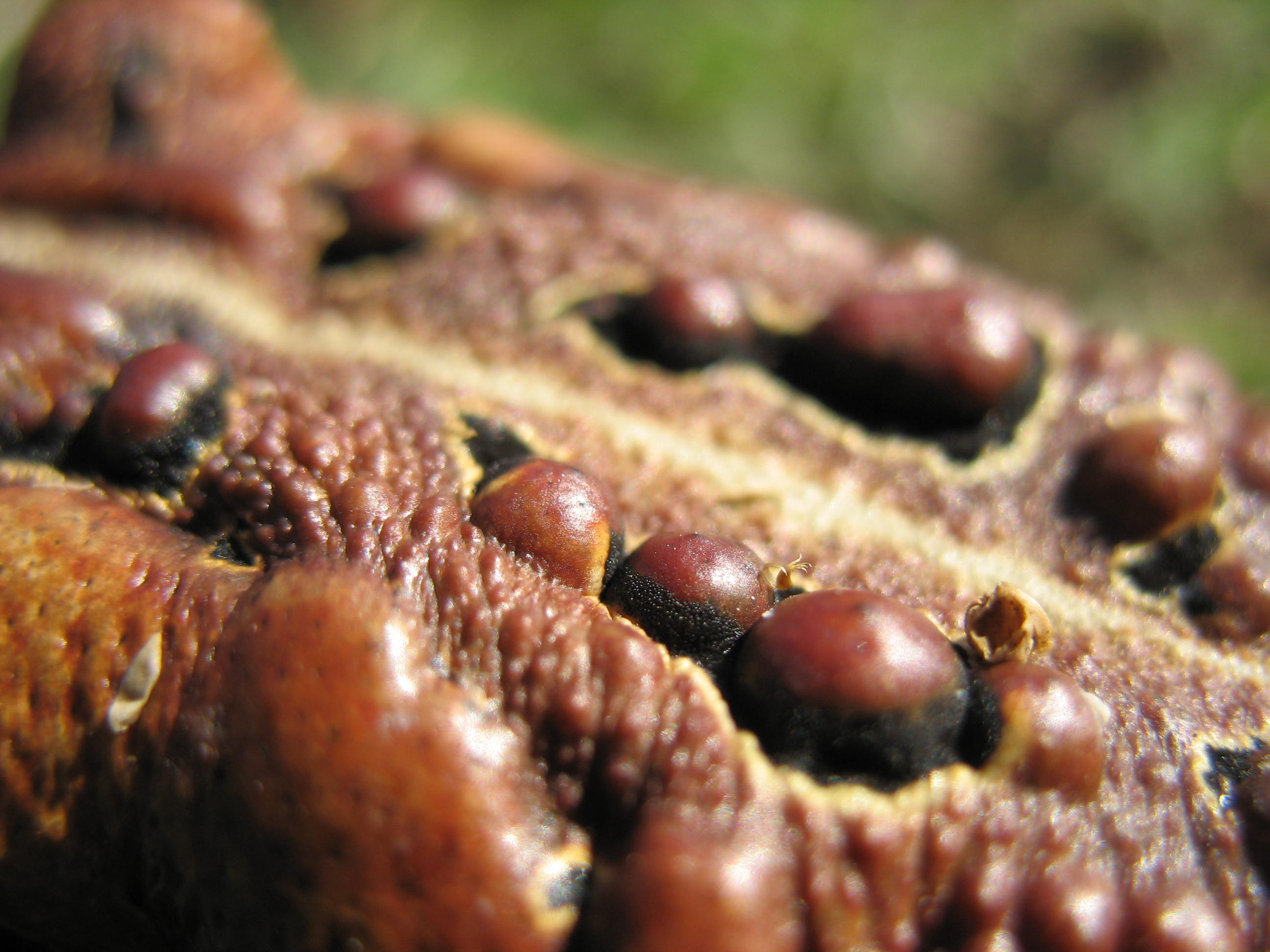 No claims were made, no evidences were shown. It's only a guessing game.

Bruno D. said:
For example: if I create a thread asking the opinions on what's this, can anyone answer?

Trailspotter said:
Google can: a close-up of the skin of Fowler’s Toad
https://buzblog.wordpress.com/2010/10/
Click to expand...

WhiteTiger said:
Yes, some of the pictures seem to have similar formation of a cell: even a clue of the nucleus inside the cell.
Click to expand...

Those are simply "out-of-focus" particles.
Dirt dust or rain mist is the likely cause.
Tiny particles, when out of focus, will appear as "bokeh",especially apparent when using a flash in the dark (or with a dark background).
Add some lens "chromatic aberration", and you will get some unwanted color in those blurred particles.
(see also "purple fringing" and "orbs, optics")
It's the camera and lens creating those shapes and colors.

Do you think you are photographing actual "cells and neuculi" ?


WhiteTiger said:
Why I refer them as "chemdust" which is kind of illogical term, if we referr to the theory of aerial dispersion of metals in order to make rain: is couse of the particles reflect light so much, that they seem to be like little mirrors.
Click to expand...

Without any other research evidence, you seem to be simply guessing what you are seeing, then names are invented for it.


WhiteTiger said:
If you zoom the pictures with water vapour, you do not find those different colour of particles at all, but is is mostly whitish/grey particles: nothing similar to those "mirrorparticles".
Click to expand...

Water vapor is invisible to the eye. When you breathe out on a cold day, your warm humid (vapor) breath "condenses", and you see that. I can assure you, there is no such "fog" in your lungs......before it condenses outside your body in cold air.
Also..."mirrors" (or shiny solid particles) won't create a rainbow effect. To get a rainbow effect, the particles must be transparent (not solid). Light passes through the particles, and gets refracted and dispersed into the spectrums of light.....like in a typical rainbow. 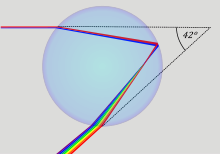 Trailspotter said:
Google can: a close-up of the skin of Fowler’s Toad
https://buzblog.wordpress.com/2010/10/
Click to expand...

This guys Facebook is in Finnish and I guess many of you aren't fluent in it yet.. He says

"What would you like to analyze? Visual analysis in my pictures is university level in file size and in quality. It took a few weeks of tuning, but I converted a regular $200 SLR camera to a microscope."

So I'm guessing this is the reason for the out of focus pictures he is presenting of the "dust". (whatever it is).

Under a real and properly focused microscope dust looks like this 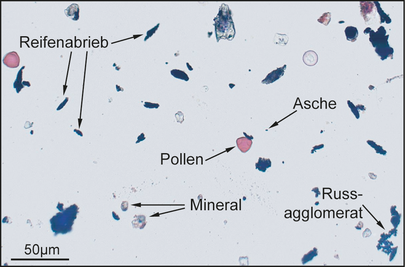