couldn't see this as being done before, so i had a little poke around... 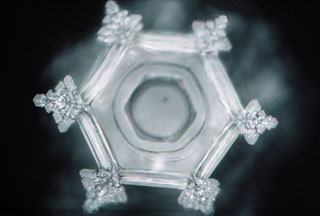 (probably meant to refer to this usage) http://en.wikipedia.org/wiki/Ubuntu_(philosophy) 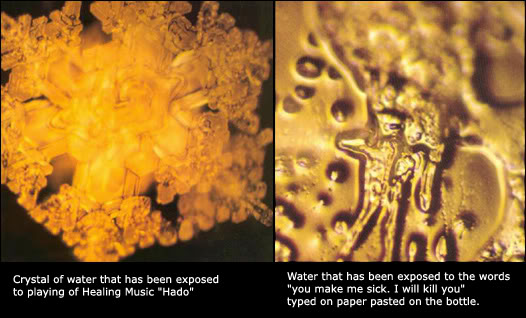 [BUNK]"..... Dr. Masaru Emoto has proven over and over again, through photographing water crystals, that there is a geometrical correspondence between human thoughts and emotions and the very shape of the matter that surrounds us. Water, Emoto has shown, "treated" with love or beautiful music, undergoes molecular change into beautiful, harmonious geometrical forms. And the same happens in reverse: chaotic or "negative" thought and emotion cause the crystals of water to become unformed and unlovely."[/BUNK]

"... However, after many hours of investigation it became increasingly clear that a superior purpose for this project was to review Mr. Emoto’s procedures and results for scientific validity. This revision in the original intent for this project has been very eye-opening and the findings have grounded my opinion of Dr. Emoto’s work in a concrete of scientific rigor and skepticism."

and i guess it would be prudent to include the wikipedia entry...

"Dr." Emoto isn't really a doctor... he paid for his instant doctorate from a McUniversity ("Indian Board of Alternative Medicines"). He's involved with a great deal of pseudoscience involved with peddling products and services that aren't even supported by his study: http://en.wikipedia.org/wiki/Masaru_Emoto

It's important to note that his study was replicated later, with Dr. Dean Radin, using an even greater triple instead of double-blind method:

The results were not significant for some of the groups tested depending on the criteria... but some of them did obtain statistically significant results (but barely).

The theory that "ice crystals might look more pretty if people concentrate on positive things" in no way supports homeopathic quackery, though, which is largely what Emoto is selling.
D

Vinncent said:
"Dr." Emoto isn't really a doctor... he paid for his instant doctorate from a McUniversity ("Indian Board of Alternative Medicines"). He's involved with a great deal of pseudoscience involved with peddling products and services that aren't even supported by his study: http://en.wikipedia.org/wiki/Masaru_Emoto

It's important to note that his study was replicated later, with Dr. Dean Radin, using an even greater triple instead of double-blind method:

The results were not significant for some of the groups tested depending on the criteria... but some of them did obtain statistically significant results (but barely).

The theory that "ice crystals might look more pretty if people concentrate on positive things" in no way supports homeopathic quackery, though, which is largely what Emoto is selling.
Click to expand...

This study is very underated in my eyes. Its a huge discovery!

there is no discovery here. Giving him the title doctor is something of an insult to everyone else who went to the effort to perform a doctoral thesis.

EVERYTHING to this is subjective at best, a scam at worst.

Dontbeafraid, can you tell us why you feel how you do?

I had forgotten about this thread.

My stance is still somewhere between DontBeAfraidEVER, and lotek's... although I disagree with both of you.

It's an interesting study, but I wouldn't say "huge". There are better controlled studies which deal more directly with physical variables when studying "the effect of conscious intention has on anything, or lack thereof".

Doing the math between the fact that our bodies are mostly water (and assuming either of the two studies are valid that "intention affects the way ice crystals look when they're forming")... the math tells me that if you lock someone in a freezer, and you concentrate happy thoughts at them, you might get some pretty formations when you put their frozen blood under a high powered microscope, that most people would tend to agree are more pretty than if you didn't concentrate happy thoughts at them.

What it doesn't imply in the slightest is there being anything to homeopathy. The result (if valid) is not, "Thoughts effect water, we're mostly water, therefore we can make magical cure-all water!" The -effect- was merely the physical formation of the ice crystals, that people happened to find marginally more "pretty" than the control group. If you want to "prove" that, you would have to show how the structure of ice crystals has any effect on any sort of ailment... though I can't think of a single mechanism or explanation as to how that could possibly be true.

Actually, I agree with most of your points. It's disgusting that people can pay a few hundred bucks and immediately start calling themselves "Dr.", without having actually learned anything, or done any sort of work to earn that distinction.

I don't think the study is "huge", but I also don't think its trivial, or unimportant. Although the results were tabulated merely from "opinions" on how "pretty" people found the ice formations, it was shown (Dr. Radin used much better controls) that there was a real difference between the experimental and control group(s)... similar to how most psychological studies are conducted, at least.

But I would agree that "DR." Emoto is running a scam. His/Radin's results don't imply any sort of "healing" effect, or whatever other crazy stuff he's trying to peddle on his website. It's been awhile since I checked out the studies, or his site, so correct me if I'm mistaken on anything.

id hope no one freeze me and think happy thoughts upon me.. lol the idea that this(delectably mythical) effect and our bodies are in any way connected because they both contain water is just... i agree with your last statement on that.

this ventures into bunk because im a little reluctant to venture into another study on this, but i am willing to bet that any results by radin fall within a margin of error, coincidence, subjective interpretation, or other minor effect that is compounded by an attribute of testing. pure speculation tho as i said.

i can freeze 10 thousand samples, get 10 thousand unique crystals, and whatever was going on doesnt matter. due to confirmation bias, the few crystals which in anyway subjectively resemble what you expect will prove to you there is an effect, even tho no actual science is being conducted. Due to sample size no matter what several hundred will seem to show a connection. the ones which dont will be ignored, intentionally or not. i hope to one day see this used as an example of cognitive biases.

why water? to hell with water, lets pick a chemical that forms the same crystal lattice every time it crystallizes under predictable conditions. now do whatever you will to it and see it always form the same shard structure. why is it unaffected? why only water? whats the chemical difference contributing to this? why does copper sulfate note care about your feelings?

It's been awhile since I've gone through either study. If I recall correctly, on my initial "delving" into this subject matter, it went something like,

1) Dr. Emoto published his study
2) "That's pretty interesting. Let me look up more about him and his work."
3) "Okay... not a real Dr., and spends the vast majority of his time peddling magical water, the effects of which aren't even supported by his experiment. More than sketchy."

4) "Huh, Dr. Radin followed up on this. Still a weird effect, with little explanation to explain the mechanism, but the controls used seem valid."

I agree with your criticisms on Emoto's study, but not Dr. Radin's. If I recall correctly, the chance for the "crystal photographers" to pick and choose "good looking crystals" was impossible. Why? IIRC again, the experiment setup was as followed:

1) Freeze a bunch of water, without doing anything to it.
2) Do all the controlled experiments. Have one batch where people meditated happy thoughts on the crystals, another where they played happy music to the water, another where they played Hitler's speeches at the water, etc.
3) Label the samples in code, so you know which ones they are, but the photographers don't.
4) Have photographers take pictures of random ice crystals within the sample, without them knowing which ones are Hitler water or Buddha water.
5) Show those photographs to a bunch of people, who rate them on attractiveness.

The most obvious mundane explanation would be "the photographers just took more pretty pictures of the "goodishly influenced ice crystals", but it appears they controlled for that, ruling that explanation out. It's also worth noting (again IIRC) that not all his results were significantly significant... I think it was only the ones who were subject to conscious intention, and not just "playing good or bad music next to them" that provided statistically significant results.

When analyzing these types of experiments, you have to be -highly specific- as to what you're addressing. For example, the actual results themselves, and their implications. The results were, statistically significant (in lame speak: not due to random chance) for the case of "happy thoughts at water". This just means that more people found the "positively meditated on" ice crystals more pretty looking than the "unmeditated on" crystals.

Why is this significant? Because the most direct explanation is that meditation affected the way they were formed. Other explanations exist, like "meditators telepathically communicated with the people who were rating the beauty of the crystals forward in time to influence their decision", but... well... although hypothetically possible, I'd probably go with the first without further experimentation, as it relies on a lot fewer assumptions about the nature of reality.

Why is it not significant? Well, one, we're dealing with opinions. To be clear, though... this is pretty much how all psychology studies are conducted (obvious exceptions exist). For example, one off the top of my head is "people who wear cologne are rated as more attractive by women than people who are not, even when separated in such a way that they cannot actually smell or tell that the subject is wearing cologne". It's still just a survey of opinions, but the fact that a statistically significant amount of people rated people wearing cologne as being more attractive than those who didn't, despite not being able to smell anything, is still interesting. The same sort of logic applies to this experiment... its an interesting result, because the controls in place suggest that it's not merely an exercise in "cherry picking", as the photographers didn't know which samples "should look more pretty", if they wanted to skew opinions (again, discounting an even more sketchy sort of "telepathy" explanation).

But, mainly, it's not significant because who the hell cares about how pretty ice crystals look? It does not in any way imply any sort of "healing properties, which Emoto (not Dr. Radin) is trying to profit from. It is, fundamentally, a psychological survey, that at this point serves no useful purpose... unless someone did a valid follow up study somehow showing "pretty ice crystals are better for your health", which to my knowledge has never even been attempted.

To your last point... again, it's highly important to be specific about what results imply, what they don't, and what can be reasonably said given experimental evidence. These two experiments were done with water... I would guess because its incredibly cheap, and has a fairly easy freezing point. It says nothing about copper sulfate, or any other sort of liquid, one way or the other. I'm not sure if copper sulfate cares about anyone's feelings or not... there (to my knowledge) isn't any sort of experimental evidence which confirms or denies this, which makes a stance one way or the other a mere assumption.

Naturally, I'm inclined to believe that a fluid which tends to freeze in a more ordered way would be less (if at all) influenced by happy rainbow thinking... but without a controlled experiment to give evidence one way or the other, all I can offer is assumptions and biases on that point. The idea of not assuming conclusions before proper experimentation is key to being skeptical.
Last edited by a moderator: Nov 20, 2013