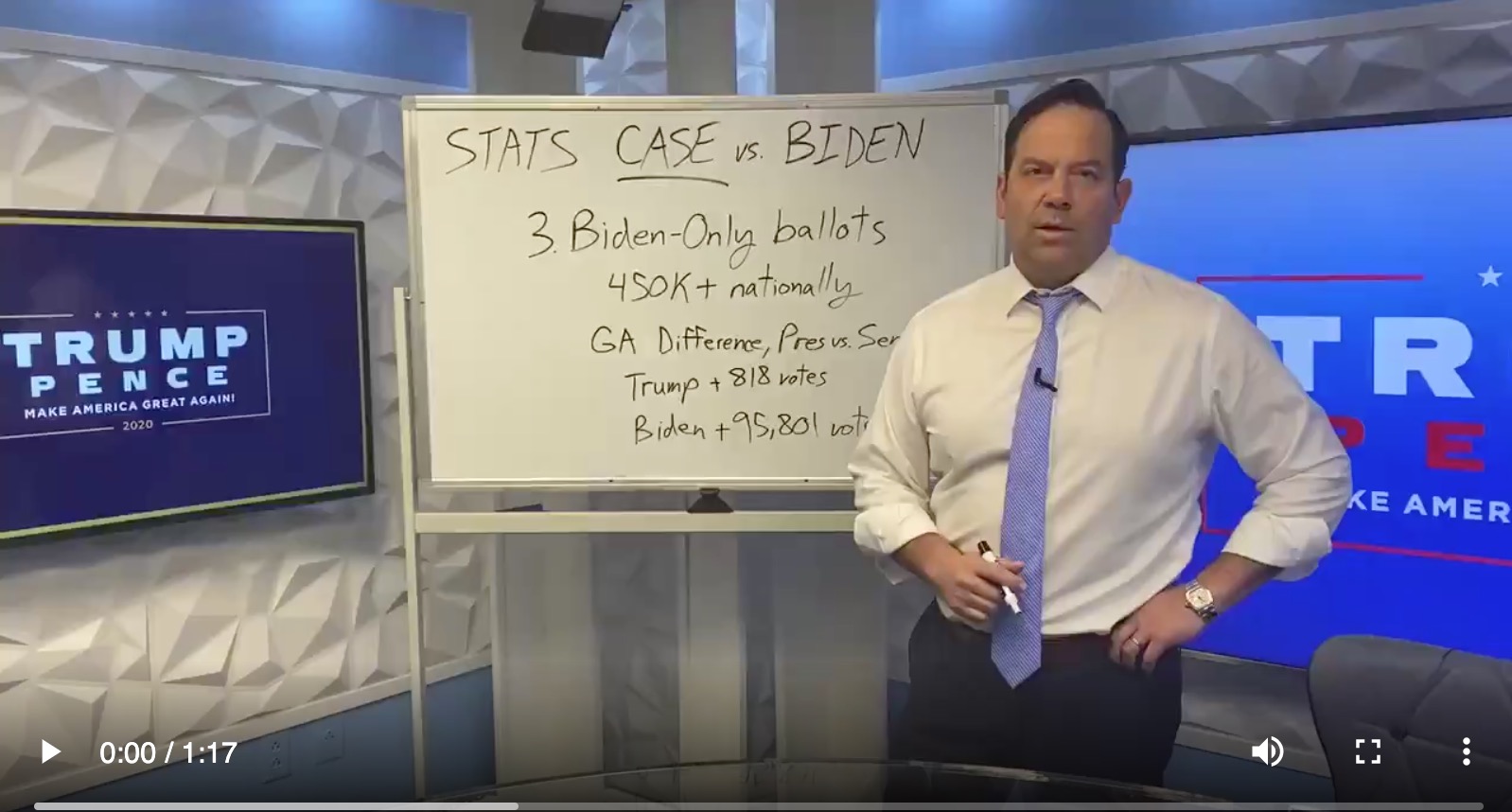 The simple math checks out, although now with updated numbers, it's -789 for Trump and +99,868 for Biden 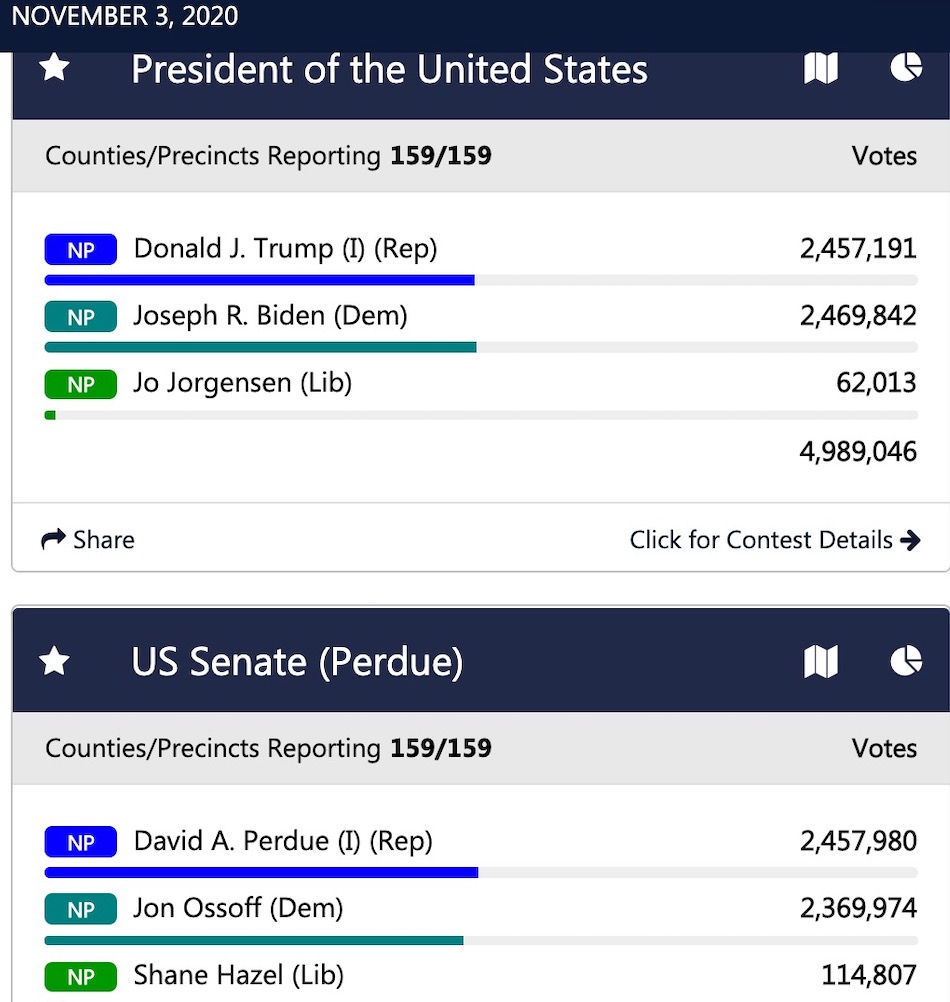 But wait, LESS people voted for Trump than for Perdue(R)? And Jorgensen(L) is at -52,794 compared to Hazel. So what's going on? To understand this, it's useful to also look at the 2012 and 2016 elections for context. Firstly here from the official GA state website: 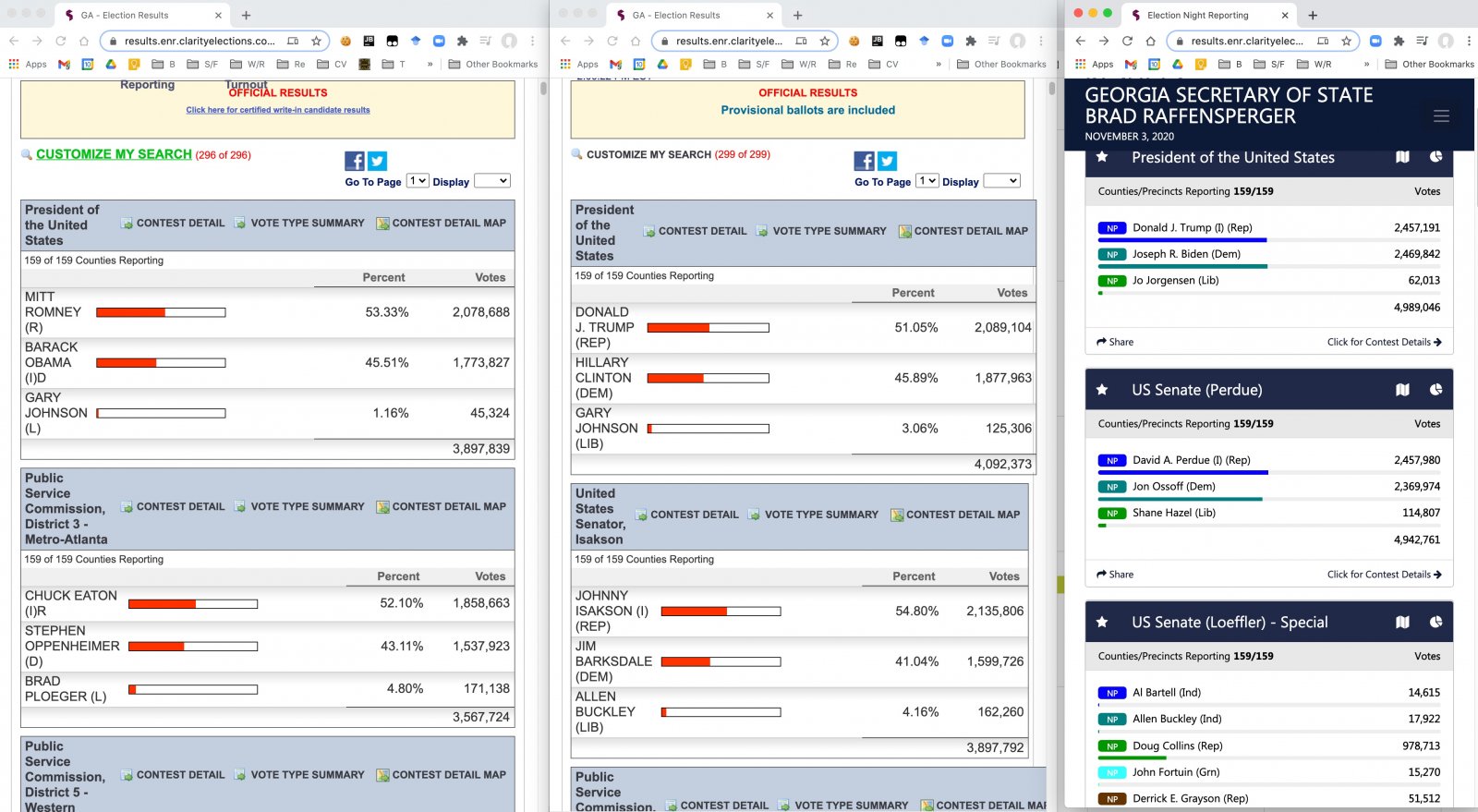 And those same numbers converted into a spreadsheet, with the difference between the presidential votes and the votes for the senator of the same party calculated, at the bottom.

People don't always vote for Senators of the same party as who they voted for Presidents. Libertarians probably felt the Presidential election was more important than Senator, so those 52,794 voters that voted for Hazel but not Jorgensen largely would have voted for Biden or Trump.

And since Trump didn't get any excess votes, you might think they mostly went for Biden.

But what about the other 48,000? For this to be suspicious means you'd expect the number to be really low, or negative, like Trump's number. But in previous years the number has been high for democratic candidates. It was 235,905 for Obama in 2012, and 278,237 for Clinton in 2016, so really 99,868 is hardly surprisingly high. If anything it's surprisingly low.

Perhaps what is surprising here is that Trump got fewer votes than the Republican Senatorial candidate, after all, Mitt Romney had an excess of 220,025 in 2012. The -789 number is actually an improvement over 2016, when Trump received 46,702 votes fewer than Republican Senator Johnny Isakson.

The reality is there are several factors that go into this difference, and it varies wildly from year to year. A big factor is the voters who split the ticket. I.e. they vote one way for President and another for Senate (or House). A nationwide survey of 2020 candidates had 11% doing some kind of split:
https://www.pewresearch.org/politic...-party-ticket-for-president-senate-and-house/ 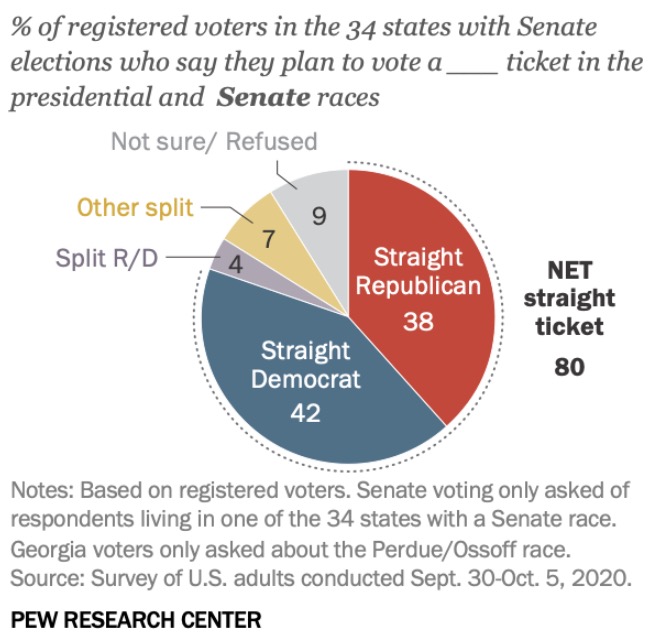 There was also international election observers invited in by the Trump administration. They monitored Georgia amongst others.

A team of international observers invited by the Trump administration has issued a preliminary report giving high marks to the conduct of last week’s elections--and it criticizes President Trump for making baseless allegations that the outcome resulted from systematic fraud.

A 28-member delegation from the Organization of American States followed events in several locations across the U.S., including in the battleground states of Georgia and Michigan, both remotely and with observers at polling stations and counting centers.
Click to expand...

The OAS is considered by some to be part of a US effort to spread democracy in Latin America; with 28 observers, it seems like a symbolic effort that says "look, we are the same as you" that aims at having all OAS countries allow observers at their elections.

On Election Day, the members of the Mission were present at polling places in Georgia, Iowa, Maryland, Michigan and the District of Columbia, and observed the process from the opening of the polling centers through to the close of polls and the deposit of voting materials with the appropriate local authorities. Members of the Mission also visited tabulations centers to observe the tallying of result.

The report reads like press release, it's fairly soft.

Compare with the OSCE, who also sent observers.
From their press release on Nov 4th:

“Nobody – no politician, no elected official – should limit the people’s right to vote. Coming after such a highly dynamic campaign, making sure that every vote is counted is a fundamental obligation for all branches of government,” said Michael Georg Link, Special Co-ordinator and leader of the short-term OSCE observer mission. “Baseless allegations of systematic deficiencies, notably by the incumbent President, including on election night, harm public trust in democratic institutions.”

There were also concerns over campaign finance. While this is regulated at the federal level with ceilings on individual donations to campaigns and full disclosure, the regulations on the unrestricted independent spenders effectively reduce transparency and amplify the impact of money in politics. The total expenditure is estimated to reach $14 billion for these elections.

The international election observation mission for the general elections in the United States totalled 102 observers from 39 countries, made up of 50 ODIHR-deployed experts and observers, and 52 parliamentarians and staff from the OSCE PA.

From the OSCE "STATEMENT OF PRELIMINARY FINDINGS AND CONCLUSIONS" :

The 3 November general elections were competitive and well managed despite legal uncertainties and logistical challenges.

There was an unprecedented volume of litigation over voting processes in the months before the elections, with over 400 lawsuits filed in 44 states, some still before the courts a few days before elections. The legal uncertainty caused by this ongoing litigation placed an undue burden on some voters wishing to cast their ballots and on election administration officials. [..] There was a widespread perception that federal judges often voted on election-related matters along partisan principles.

The allocated federal funds alone were not sufficient to address the additional strain aggravated by the unprecedented rise in online voter registration and postal voting, and officials at all levels acknowledged that election International Election Observation Mission Page: 2 United States of America, General Elections, 3 November 2020 Statement of Preliminary Findings and Conclusions infrastructure is generally underfunded.

Legislation and practices deprive some categories of citizens of their right to vote. More than 4.5 million citizens residing in District of Columbia and U.S. territories, 90 per cent of whom are ethnic and racial minorities, lack full representation in the Congress. Despite some changes in state laws to reverse felony disenfranchisement, an estimated 5.2 million citizens are effectively disenfranchised due to a criminal conviction, with about half of them having already served their sentences. These restrictions on voting rights of felons and ex-felons contravene principles of universal suffrage, and the principle of proportionality in the restriction of rights, as provided for by OSCE commitments and other international standards.

Animosity and heated rhetoric between candidates negatively affected the focus of campaigns on policies and party platforms. The two leading presidential candidates accused each other of corruption, fraud, working for foreign interests, an inability to lead, and support for extremist groups. The incumbent president’s use of discriminatory and pejorative statements against individuals on the grounds of their gender and origin was of particular concern. The distinction between state and party activities was not always respected, as the incumbent president repeatedly used his official capacity for political advantage. On several occasions, President Trump created an impression of refusing to commit to a peaceful transfer of power, claiming that the electoral process was systematically rigged, particularly in relation to postal voting, without presenting any substantial evidence of systematic malfeasance and contradicting election officials at all levels. Such statements by an incumbent president weaken public confidence in state institutions and were perceived by many as increasing the potential for politically motivated violence after the elections.

Legal restrictions on presence of international observers are in place in at least eighteen states, which is not in line with OSCE commitments. While the presence of IEOM observers was welcomed in the majority of states where observers were deployed, state election officials in three out of 30 states visited declined to meet with them or share their views.

Jurisdictions across eight states continue to use voting machines which do not provide for a voter-verified paper trail, making it impossible to ensure an adequate recount or post-election audit.

That's from the first 4 pages, the whole report has 24 pages, and starts to go into more details ("Preliminary Findings") from the bottom of page 4.

Basically, the US elections went great by South American standards, while Europe has some suggestions for improvement. ;-)

Great breakdown, Mick. I have a friend who seems to be drifting into these election fraud conspiracy theories a little bit bring this claim up to me, so I looked into it briefly earlier this week. At the surface level, it almost seems like a reasonable inference, but then you remember 1) that state election boards don't publish the ballots themselves, rather just the number of votes each candidate accrued (so you can't actually tell how many people only voted for Biden), and 2) plenty of people do vote split ticket. My state of North Carolina voted for Trump by a slim margin of ~1.3%, but our Democratic governor beat his Republican challenger by a full three percentage points. Heck, Roy Cooper actually got more votes overall than Trump (2,834,029 vs. 2,757,112).

We all know by now that Trump is a uniquely polarizing figure, so it wouldn't surprise me if some Georgia voters were happy to vote for a Republican senator but weren't willing to abide Trump anymore. No conspiracy theory, just a deeply unpopular president performing worse than a milquetoast, comparatively inoffensive incumbent senator because people split their votes.
You must log in or register to reply here.