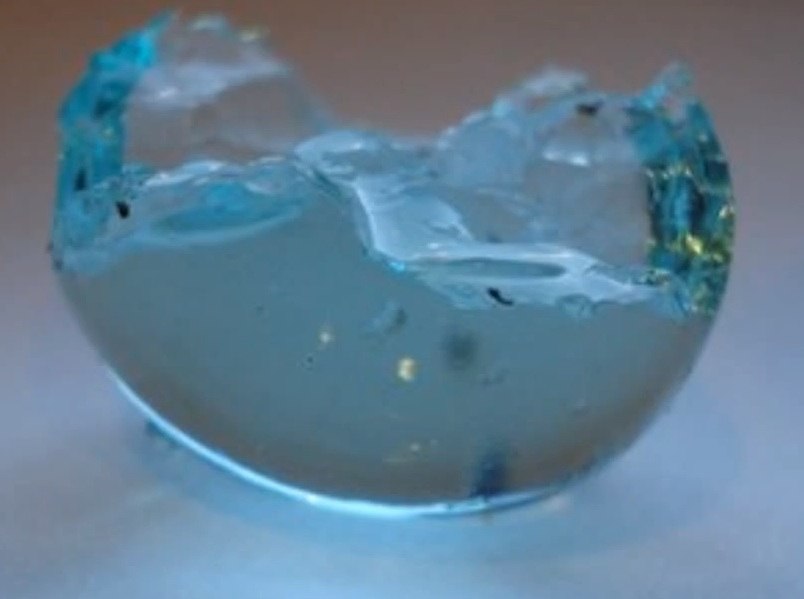 These almost certainly are gel "water beads" aka "jelly marbles", "Orbeez", or "water marbles". Made from superabsorbent polymers, and used for decorative functions, as kids toys, and to water plants. They could qute possibly just have been blown over from a neighboring property, maybe swept up high in the thunderstorm from miles away, or just some local kids playing with them. This type of thing: 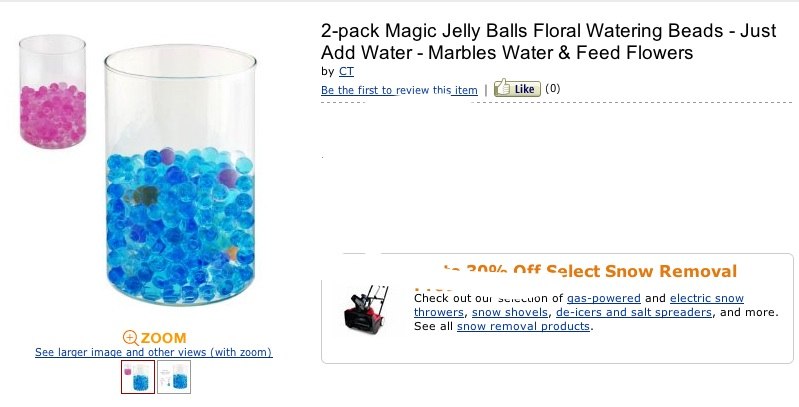 And here's a video of Orbeez, showing how they might end up on the lawn: 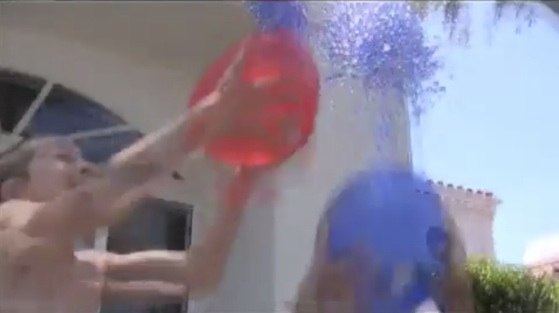 Very timely - thanks for this

Seems like the kind of things kids would like to play with. I'ts not too far a stretch of the imagination, that kids would like to have a play a throwing "war" with these small soft balls......often ending up broken, and resting in neighbor's yards and gardens.

Staff member
A fully loaded one would make an interesting projectile in a catapult or slingshot.

That's exactly what my kids do with the neighbours up and down our street !
The kids like the disgusting slippery sensation and the goal often seems to be to get them inside the others clothing so they squirm in horror. They buy cheap bags of them up at the local craft shop and swell them up in big salad bowls full of water, then run around with plastic shopping bags full of them reaching in for hand-fulls and throwing them and trying to tip the lot down the back of shirt or dress.
I'm sick of slipping on those things when lawn mowing as it's easy to lose you footing on a group of them and I've taken to wearing steel capped work shoes.
They seem to disappear after a few weeks probably breaking up into smaller and smaller pieces and just get covered up by the grass

Staff member
Quite possibly they were chopped up into smaller pieces whilst mowing the lawn, and then swelled up a bit in the storm.

Or course strange things DO fall from the sky from time to time.

"The balls do look very much like the florists' hydrating jelly, as suggested by some eagle-eyed members of the public."
Click to expand...

Lots of people spotted this. It's just sad that the media like to run with stories without ever doing any investigation first. Next thing you know they will be publishing rod and orb photos.

Here's another explanation for 'star jelly'. At work there is a tree that oozes sap which forms jelly-like blobs on the bark. When it rains, these blobs fall to the ground. When these first began appearing on the sidewalk, I initially attributed them to being super-absorbent polymers found in our bio-hazard cleanup kits, but they kept appearing year after year. Finally, we had a drought this year, so the rain wasn't washing them off the tree and there they were, all over the bark about ten feet up on the trunk. It only took four years to solve that mystery. 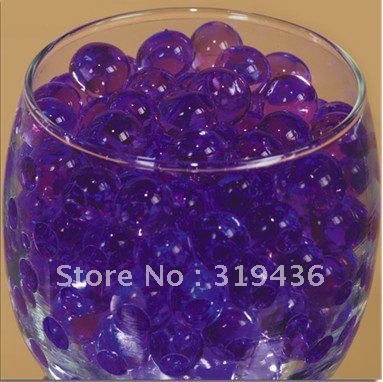 You can buy these things in all colors to set your flowers in. You soak little grains in water and they grow to orbs that release the moisture slowly for the plants. Some of the coyotes [smugglers of illegal immigrants] have told the illegals they are guiding to fill their milk jugs with them and then water so they will last longer, then when they try to drink they find out it is now right next to impossible. I personally think someone found out the hard way that they didn’t work like the coyote said they would and poured them out and someone found them before they were completely dried out and desicated again.

This has come up again. Purple spheres balls found in Arizona and the TV news seems to have no idea what they are.

Chemtrails people jumped on it. But......
How could something dropped from 6 miles up appear on the ground in a nice little pile, though?

Next, they were contacted by a local seller of the beads:

A week later, they seem to have been better informed,but were carrying on with the "mystery" aspect:

There have been cases of children thinking the smaller dried gel spheres were candy eating them.

Some of these swell massively, and have blocked up the intestinal tract.

Don't simply leave thse things about where children can swallow them!

Banned
There are many cases of this which cannot be debunked and remain a mystery to date.

From the Sightings web site, Goo Globs over Washington State
Military Conducting Biological Warfare in Washington
Air Force General Threatens Local Resident
from Anita Sands, 12-12-97
In August of 1994, a bizarre sequence of events began to occur in the small town of Oakville, Washington. Gelatinous blobs of biological material began to rain down over an area of over 20 square miles during a storm. It would happen six times in 1994, and continue periodically thereafter. The latest was during the third week of June 1997. The fact that this was going on would not generally be known outside of Oakville until an episode of Unsolved Mysteries on Thursday, May 8, 1997, hosted by Robert Stack: (9 min, 36 seconds)
(Introduction, Robert Stack): “It came from the skies to wreck havoc on the earth. It sounds like a bad science fiction movie, but for the little town in Washington there was nothing entertaining about the scourge that befell them in 1994. Six times it rained down from above, leaving dozens of local residents ill, and several pets and small animals dead.”
“It all happened in Oakville, Washington, population 665. Here in Oakville, clouds fill the skies daily, bringing rain some 275 days a year. So, when it began pouring on the morning of August 7, 1994, no one was particularly concerned - until they realized it wasn't raining rain. It was raining tiny blobs of gelatinous goo. It came down in torrents, blanketing 20 square miles, and brought with it something of a plague.”

History
There have been reports of pwdr sêr (also pwdre sêr or pydredd sêr, Welsh for 'star-rot') for centuries.[7] John of Gaddesden (1280–1361),[8] for example, mentions stella terrae (Latin for 'star of the earth' or 'earth-star') in his medical writings, describing it as "a certain mucilaginous substance lying upon the earth" and suggesting that it might be used to treat abscesses.[6] A fourteenth-century Latin medical glossary has an entry for uligo, described as "a certain fatty substance emitted from the earth, that is commonly called 'a star which has fallen'".[9] Similarly, an English-Latin dictionary from around 1440 has an entry for 'sterre slyme' with the Latin equivalent given as assub (a rendering of Arabic ash-shuhub, also used in medieval Latin as a term for a 'falling' or 'shooting' star).[10]

Oakville is a beatup - see https://www.metabunk.org/threads/oakville-wa-sprayed-with-toxins-1994.1057/

and as for the ancients...well suffice to say that it is often difficult to accept their "raw" statements with anything other than skepticism - eg for a couple of thousand years "Lyncurium" was thought to be solidified lynx urine.....although it was debunked in the middle ages at the very beginnings of science.
Last edited by a moderator: Nov 20, 2013

and as for the ancients...well suffice to say that it is often difficult to accept their "raw" statements with anything other than skepticism - eg for a couple of thousand years "Lyncurium" was thought to be solidified lynx urine.....although it was debunked in the middle ages at the very beginnings of science.
Click to expand...

and as for the ancients...well suffice to say that it is often difficult to accept their "raw" statements with anything other than skepticism - eg for a couple of thousand years "Lyncurium" was thought to be solidified lynx urine.....although it was debunked in the middle ages at the very beginnings of science.
Click to expand...

If you mean it is debunked... I think that a matter of opinion. Certainly no evidence put forward to say what it was.

The story seems to have changed since that thread. It can only mean it has been expanded on or the thread was devoid of some of the facts/allegations.

It has changed from, 'on a farm' to 'blanketing 20 square miles'... big difference.

Also it is reported many people were very ill, (lasting many weeks or even months and cattle died.

Maurice Gobeil (local resident): “I got sick, my wife got sick, my daughter got sick and everybody that lived here got sick.”
Beverly Roberts (local resident): “Everybody in the whole town came down with something like the flu, only it was a really hard flu that lasted from seven weeks to two or three months.”
Robert Stack: “The local police were among the first to report the perplexing precipitation. Officer David Lacey was on patrol with a civilian friend at 3am when the downpour began.”
David Lacey (police officer): “We turned our windshield wipers on, and it just started smearing to the point where we could almost not see. We both looked at each other and we said 'gee this isn't right'. We're out in the middle of nowhere, basically, and where did this come from?”
Robert Stack: “Officer Lacey pulled into a gas station to de-goo his windshield. As an added precaution, he put on a pair of latex gloves.”
David Lacey (police officer): “The substance was very mushy, almost like if you had jello in your hand. You know, you could pretty much squish it through your fingers. We knew it wasn't something we would normally see, because we had never experienced it before. We had some bells go off in our heads that said that basically 'this isn't right, this isn't normal.”
Robert Stack: “Local resident Dotty Hearn was equally baffled. By the time she stepped outside that morning, the storm had ended, but the blobs were everywhere. “
Dotty Hearn (local resident): “It looked like hail, laying on top of the wood box and everywhere else, so I just went over and I touched it. It wasn't hail. It was a gelatinous material.”
Robert Stack: “By mid-afternoon, officer Lacey had inexplicably taken ill.”
David Lacey (police officer): “I was to the point where I could hardly breathe. I started to put together that possibly whatever the substance was, it had made me violently sick and ill like I had never been before, to the point where it just totally shut me down.”
Robert Stack: “Across town, Dotty Hearn wasn't fairing much better.”
Dotty Hearn (local resident): “I started feeling dizzy, and everything started moving around. It got worse, and as it did I became increasingly nauseated.”
Robert Stack: “An hour later, Dotty's daughter and son found her sprawled on the bathroom floor.”
Sunny Barclift: “She was cold, drenched with perspiration and pale. My mom had been vomiting, had extreme vertigo and had been complaining that she had extreme difficulty with her vision.”
Robert Stack: “Dotty would spend the next three days in the hospital. They diagnosed her with &quot;a severe inner ear infection.”
Sunny: “For some reason, as we were going out the door, I remembered the substance, and I wondered if perhaps it might have had some sort of effect on her. So, I opted at that moment to take a sample of the gelatinous material to the hospital.”

Content from external source
Last edited by a moderator: Nov 20, 2013

I didn't say "debunked" - I said that it was a beatup - by which I meant a lot more was made of it than it was - the "publicity" given it seems tied to a TV programme.

AFAIK no-one knows what the "stuff" was, although there were suggestions.

however some aspects of it are debunked: there was no mass illness for example, and neither did the "goo" appear all over the place - it was only on 1 farm IIRC.