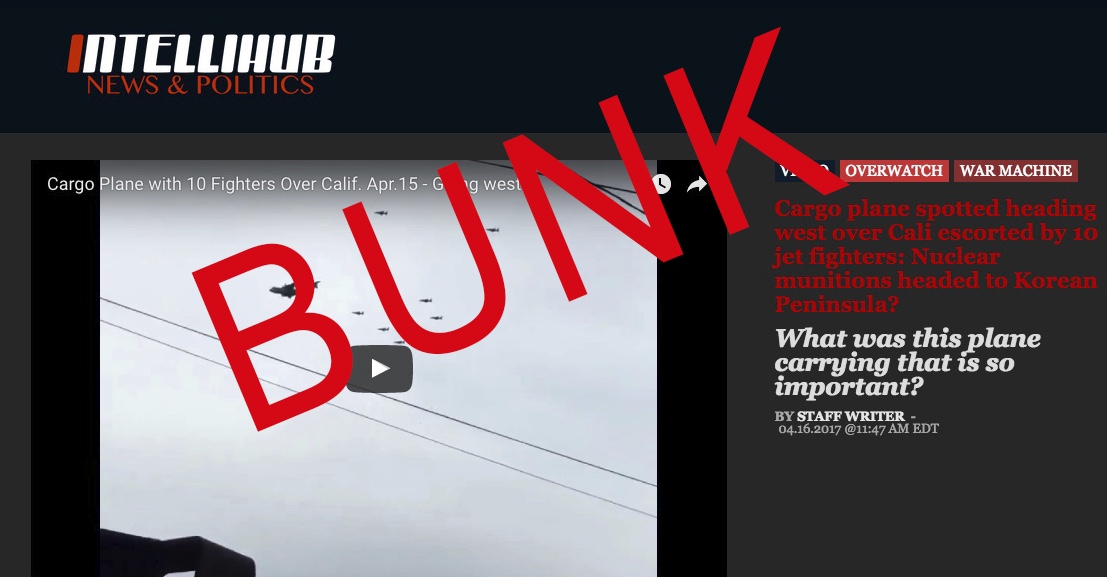 This is a false, and only a few minutes research revealed that the planes were the French airforce demonstration team, Patrouille de France, who were in Sacramento for an air show, and later flew in the this formation over San Francisco. The cargo jet is a french Airbus A400M

I was out for a walk and saw them. It was a bit unnerving given the recent news. Just before 7pm 10 jets flew very fast (and loud) towards the GG bridge, which is about 10 miles south of where I was walking. Then about 10-15 minutes later they headed back in the direction they came from, and a cargo plane followed a few minutes later. I assumed that they were flying in/out of Travis AFB. When I got back from my walk I did a Google news search for "fighter jet" and "san francisco" and found out what was going on.

SAN FRANCISCO (CBS SF)– The sight of French fighter jets over the San Francisco Bay had many residents concerned. They took to Twitter, many offering explanations that were mainly guesses, and for the most part, just plain wrong.

They must have made at least two fly-overs because the linked article was written before I even saw them. I double-checked the time of the pictures I took (in case I couldn't figure out what they were and needed some Metabunk help in identifying them) - The jets flew SW towards the bridge at 6:57 and back NE towards Travis at 7:07, the cargo plane flew NE past me at 7:22.

Edited to add, that one can only hope that an irresponsible article like that Intellihub is never taken seriously by N. Korea...
Last edited: Apr 19, 2017

What could be more natural than the French sending fighter jets to attack San Fran?

MikeC said:
What could be more natural than the French sending fighter jets to attack San Fran?