Debunked: 150 Calories of sugar leads to 11-fold increase in the prevalence of diabetes [1.1%]

Staff member
A recent article in the British Journal of Sports Medicine^ is being widely reported, with varying degrees of accuracy. One piece of data in the article in particular seems to suggest that if you consume an extra 150 calories of sugar daily (e.g. one extra can of soda) then you get an 11-fold increase in your risk of type two diabetes:


A large econometric analysis of worldwide sugar availability, revealed that for every excess 150 calories of sugar (say, one can of cola), there was an 11-fold increase in the prevalence of type 2 diabetes, in comparison to an identical 150 calories obtained from fat or protein.

However this is not correct, the article gives the source of this claim:
http://www.ncbi.nlm.nih.gov/pmc/articles/PMC3584048/ (http://archive.is/wGmbO)
Which says:

every 150 kcal/person/day increase in sugar availability (about one can of soda/day) was associated with increased diabetes prevalence by 1.1% 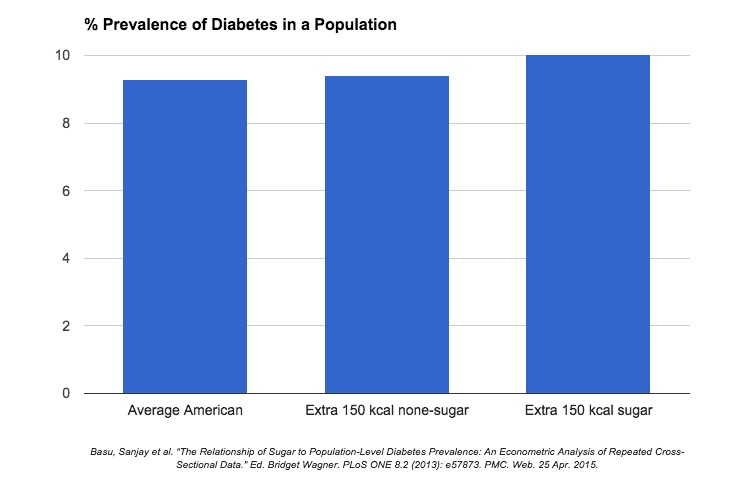 Unfortunately this is not at all clear in the numerous retellings of the story, and nor is it clear that they are talking about daily calories:
http://www.bbc.com/news/health-32417699 (http://archive.is/UXzGA)

research has shown that diabetes increases 11-fold for every 150 additional sugar calories consumed compared to fat calories." - So apparently a mars bar a day amidst a healthy diet will pretty much increase my risk of diabetes 11 fold! I wonder if this adds up, for every mars bar i've eaten its stacked 11 more times. I must have diabetes about 3000 times by now.

The more the retelling strays from the original text, the more significant the error becomes:
http://www.medicaldaily.com/overeat...ot-inactivity-you-cant-outrun-bad-diet-330342 (http://archive.is/mGd7k)

The research team crunched the numbers and found for every 150 extra calories you consume from sugar, your diabetes risk increases by 11 times.

Researchers determined that a person increases their risk of developing type 2 diabetes by 11 times for every 150 extra calories they consume from carbohydrates, specifically sugar.

Here they don't even note this is compared to other sources of calories. At this point it can't really be considered to be simply unclear, these statements are flat wrong.

And when reduced to a Tweet, the misrepresentation is obviously going to get repeated as fact:

For example, drinking one 150-calorie soda is 11 times more likely to increase a person's risk for type 2 diabetes, compared to 150 calories obtained from fat or protein.

"11 times more likely to increase risk" is meaningless, unless you know how much it increases the risk.

These various levels of inaccurate retelling are indicative of a common problem in web journalism. Many sites simply re-tell a story obtained from another source. This in turn may well be retold. And as the writers re-word things to avoid the appearance of plagiarism, they gradually introduce errors, particularly if they do not understand the topic, or the math.

Here the original data is actually in the rather dusty study: "The relationship of sugar to population-level diabetes prevalence: an econometric analysis of repeated cross-sectional data" - so far back down the food chain of article retelling that nobody is likely to check it. At most they might go back to the BJSM article, with the rather misleading "11-fold" description, and not realize they are talking about a difference between an increase of 0.1% and 1.1%, and so they don't clarify.

Then somebody writes and article based on their article, and the error becomes assumed fact.

One of the best attempts at clarifying this was from someone who clearly understood what the numbers meant, and did a better job than the BJSM, but still unfortunately fell short:
http://www.huffingtonpost.com/robert-lustig-md/sugar-toxic_b_2759564.html (http://archive.is/bYiRh)

Just for reference, a mechanism for how type II diabetes develops, the image is from Principles of Biochemistry chapter 23. A lot of factors are thought to contribute to its development, but it is thought that overconsumption or overproduction of triacylglycerols (TAGs) (fats) is a huge factor. Energy from excess sugar is often stored as glycogen or fat, so a high sugar diet could certainly contribute to the risks of developing diabetes.

Mick, Metabunk is a gov disinfo site, we get it. But why be a shill for 'big sugar' as well?

(Here, the 'wink' emoji is a sarcasm trip wire.)

Staff member
And just to be clear, what is being debunked here is the "11-fold increase". There's still quite a significant increase in diabetes prevalence correlating with sugar availability, just nowhere near what the language suggests.
You must log in or register to reply here.