In the Wikipedia entry for Li Hongzhi, it is written that:

In 1996, the city of Houston named Li as an honorary citizen and goodwill ambassador for his "unselfish public service for the benefit and welfare of mankind".

By April 2001, Li Hongzhi had received over 340 awards and proclamations from Australia, Canada, China (before crackdown), Japan, Russia, and the U.S. in recognition of the contributions to people's spiritual and physical health, and to freedom of belief in the world. These include certificates of recognition from several governmental bodies in the United States – including Honorary Citizenship awarded by The State of Georgia and city of Atlanta.


Checking the citations for these, I find that the first one leads to a paper written by C.S. Chan for The China Quarterly, where there is no record of the words "honorary citizen" and the only mention of Houston is as follows:

As early as 1996, Li received honourable recognition from Houston, Texas.
Click to expand...

The source for the claim of "over 340 awards and proclamations" is a document of nominees for the European Parliament's 2001 Sakharov Prize. The sentence above (as included in the Wikipedia page) is quoted verbatim from this document, though the document itself lists no sources for its information, and the whole entry for Li seems somewhat strangely written, as though it was provided for them by someone from Falun Gong (for example, sentences like "Mr. Li Hongzhi was denounced by the Chinese authority as the Most-Wanted criminal, but Interpol flatly rejected the request to extradite him because he has no criminal record and is wanted for political reasons. Mr. Li's character was venomously attacked in the state-run media, and assassins were sent in search of him" seem peculiarly florid and emotive for a bureaucratic organisation).

The source for the claims of honorary citizenship in Atlanta and Georgia is a Falun Dafa website (http://en.minghui.org/emh/special_column/recognition.html) listing "Governmental Awards and Recognition of Falun Dafa from China and the World". This list contains over 1300 entries, up to August 2006, and I suspect it is the source for the "over 340 awards and proclamations" claim that found its way into the Sakharov document (though, up to April 2001, there are actually 538 entries in this list).

The list, by the way, is mostly made up of small towns and counties proclaiming "Li Hongzhi/Falun Dafa/Gong Day/Week" - around 900 of the 1327 entries - plus includes letters, newspaper reports, and welcomes. Most are linked and include pictures, but the links to the Houston honorary citizen and the Atlanta honorary citizen are conspicuously broken. The link to the Georgia Honorary Citizen still works, but all it contains is the headline - "Secretary of State of the State of Georgia Proclaims Mr. Li Hongzhi as an Honorary Georgia Citizen" - and a no longer working image link.

The Secretary of State for Georgia at the time - December 8th, 2000 - was Cathy Cox, but searching for "Cathy Cox Li Hongzhi" I couldn't yet find any results outside of Falun Gong webpages, which seems surprising. I would think an award of honorary citizenship would be mentioned somewhere.

I did find more details about this event on a different minghui.org page, where it is stated:

On December 8th, Falun Dafa practitioners from Atlanta and other states held activities in celebration of Falun Dafa Day and Human Right Week. The event took place in Woodruff Park in downtown Atlanta and was covered by Atlanta's World Daily newspaper.


"Atlanta's World Daily" I imagine refers to The Atlanta Daily World, so perhaps there's an article in there. And maybe there was never anything like a ceremony or meeting between Li and Cox, but rather just a certificate put in the post.

Anyway, by this stage I'm thinking the whole thing's made up - but I did find something that supports the credibility of the claims on another minhui.org article from 2011, which includes an image of the honorary citizen certificate from Houston (dated 3rd of August, 1994, in contrast to 1996, as in Wikipedia):

So maybe they are real, but not that big a deal, even though they sound impressive. Certainly, having a township award a day/week to something doesn't seem like anything special.

Anyway, despite some reservations and feeling that the truth is being stretched somewhere along the line - as well as noting that the Wikipedia entry could be better - I think maybe he did receive "honorary citizen" awards from Atlanta and Georgia, but that they weren't mentioned or recorded elsewhere because it's not as fancy as it sounds.

Could still be bunk though. If anyone else can shine a light. 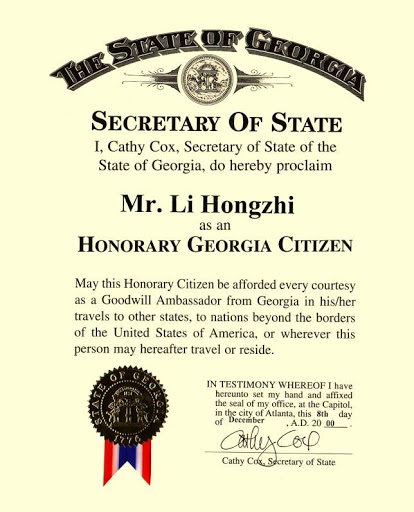 Is Falun Gong Behind Seth Holehouse's "The Plot to Steal America"? It looks like it.