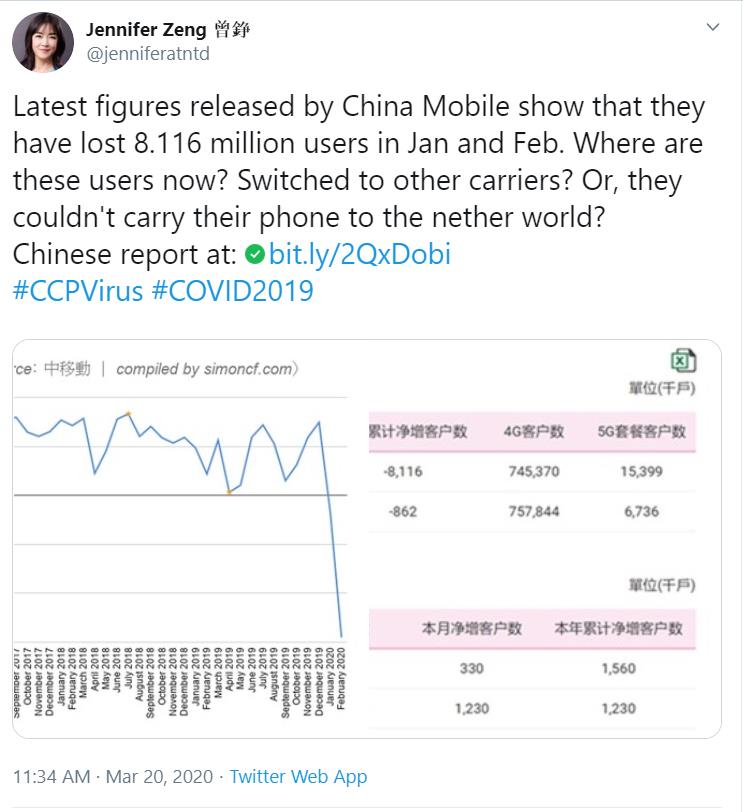 The above tweet is obviously suggesting that millions of people in China are dying of Coronavirus. And apparently China Mobile has some way of detecting when people are dead, and unsubscribing them.

Recently, China Mobile announced operating data for the past two months, and about 7.254 million users were lost from the mainland. Although the decline accounted for less than 1% of China Mobile's 942 million users, the sharp decline in numbers still seemed unusual.

The article raises the coronavirus suggestion, and the "official story"


Although many people think of the new crown pneumonia epidemic, some analysts say that the reason is related to the "number porting network" which was implemented last year, that is, the channel can be freely changed without changing the number.


In February, China Mobile had 942.161 million subscribers, a significant decrease of 7.254 million compared to January, and a cumulative net decrease of 8.116 million in two months, which is definitely the worst crisis in history.
As for the reason, it should have a lot to do with the popularity of number portability.

The second source is by a facebook user, Leesimon.hk, which does not add much:


a friend on Whatsapp told me that China Mobile (941 Million subscribers) has not seen 8 million users in the past two months. Told me to look.
So, I know his subtext. However, as a person who has a requirement for numbers, there is always a fact check.

Sina Tech has two other articles on the topic:
https://t.cj.sina.com.cn/articles/v...d=pcpager_tech&loc=1&r=9&rfunc=2&tj=none&tr=9

Both China Mobile and China Telecom have announced the number of subscribers in February. The data shows that their mobile users lost 7.254 million and 5.6 million, respectively. This shows that both companies are facing unfavorable situations. As a result of the fierce fighting between the two sides, both parties are affected. Wrecked.
China Mobile has experienced net user churn many times in recent years. In February this year, the number of net churn users reached a new record, showing that users are extremely dissatisfied with it. Users' dissatisfaction with China Mobile is mainly due to its high tariffs. China Mobile tariffs are the highest among the three major operators.


Many people think that this is the real consequence of the port number transfer. Because users have a wait-and-see period and will not respond so quickly, the churn in December and January is not serious, but by February, the wait-and-see users acted. , So there will be more churn.

In addition, I think there is an important reason is that since February, mobile has raised a lot of free delivery thresholds, such as free broadband, which was previously available at 38 yuan, but now many regions have increased to 78 yuan. From the data point of view, There were only 330,000 new broadband users in February, which was a big drop from the previous month, and there was less to attract users, and everyone ran away.

So it seems the reasons are largely just economics. Changes in pricing structure, combined with new freedoms to port your number to other networks. Quite possibly compounded by local economic downturns due to movement restrictions around Coronavirus. But nothing to suggest they all died.

I just read a Bloomberg article about this - it could be due in part to migrant workers staying home or returning to their hometowns.


Part of the drop could be caused by migrant workers -- who often have one subscription for where they work and another for their home region -- canceling their work-region account after the virus prevented them from returning to work after the Lunar New Year holidays that began in late January, said Chris Lane, an analyst at Sanford C. Bernstein & Co.

While the drop in users is unusual, the total is small relative to total wireless subscriptions which have risen to a combined 1.6 billion for the three carriers.

Things may improve starting this month as work in factories and other businesses in China resumes, Lane said.

It makes sense, China has a huge migrant network, made up of mostly internal migrants who leave their hometowns to start work in the booming factory cities. When the factories shut down, I would imagine a many people would return to their hometowns, and lose the incentive to keep their mobile subscription while they are out of work.