A dumb name that will confuse alot of actual birdwatchers, but sounds like a good future debunking source. Not sure about it's progress since googling or twitter searching "birdwatch" just gets me actual birdwatching posts.

Hopefully they have higher standards than this example (and a better name...maybe Tweet Defeats or Twit Nitpiks)

Update, 10/3/20: Jane Manchun Wong has now uncovered more details about Birdwatch, including the “Twitter Community” form, where users explain whether or not a tweet is misleading.

Staff member
I applied to join it, which you can do here:
https://twitter.com/i/flow/join-birdwatch

The criticism I've seen so far seems to divide into two camps.

Firstly, there the "Twitter is tricking people into doing their moderation for free, when they make Billions of dollars" camp. To which the response is that Twitter is trying to build a trusted community, and people won't trust Twitter itself as an arbiter of truth.

Secondly, promoters of disinformation, like RT, are pressing it as being naturally and Owellianly biased against them. To be a Birdwatcher means you have to have a verified US phone number with no recent rule violations. So that disqualifies Russian bots, but also disqualifies a lot of people who just repeated disinformation like claims of massive election fraud.


Media critic Mark Dice called the initiative "Twitter hall monitors" and said it was "another reason to join Gab.com." Journalist Alex Rubinstein tweeted: "You too can be a Twitter cop." He added that the "reply button" already gives users the opportunity to dispute the accuracy of a message, and the new program is meant to "marginalize alternative voices and encourage snitching."

Calling Mark Dice a "Media Critic" shows you where they are coming from. Here's Dice's current Twitter page. 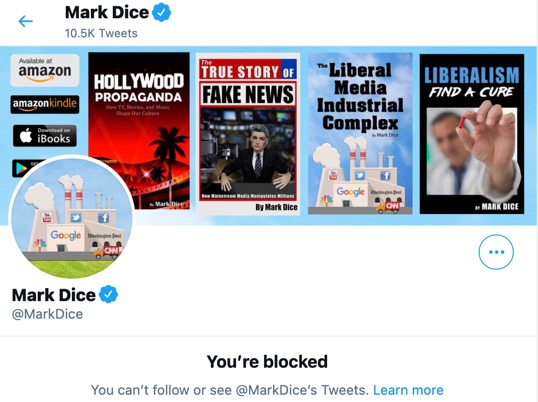 Currently, he's an "everything in major media is a lie, except maybe RT" person. This is a significant reinvention of his previous persona, which was "a satanic Illuminati elite rules the world" - as seen in his older books.

Mick West said:
he's an "everything in major media is a lie, except maybe RT" person.
Click to expand...

yea but the left (esp on Twitter it seems) seems to have a majority opinion that "everything in right leaning media is a lie", so i dont really see a difference anymore.


Mick West said:
but also disqualifies a lot of people who just repeated disinformation like claims of massive election fraud.
Click to expand...

but it doesn't seem to me that it will delete tweets? just that IF you want more info you would click on the notes tab? (and how many bunk believers are likely to do that, i think is probably pretty low.
Besides, i think right leaners are gonna find alternative social media.. so its probably way too little, way too late. Not that i envy social media publishers... not an easy job to balance now that "open internet ideals" have been thrown out of public acceptance.)
You must log in or register to reply here.