Needs Debunking: That the GPS does not implement time corrections from Einstein's relativity

The Global Positioning System is a common illustration of a practical application of Einstein's special and general theories of relativity: To remain in sync, ground clocks must operate at 10.23GHz and satellite clocks at 10.22999999543MHz. These numbers were arrived at by using a combination of Einstein's transformations for special relativity (SR), which accounts for the clocks' differences in velocity, and general relativity (GR), which accounts for their differences in gravitational potential. As explained in many online resources, e.g., [1], the SR and GR effects offset slightly, but GR dominates.

However, there is a subculture of relativity deniers on the internet, and they all claim that relativistic corrections are NOT implemented in the GPS. The approaches to this denial range from claiming that such corrections are too small to be necessary [2], to citing an obscure paper from two engineers at the Aerospace Corporation that cleverly works aberration, the speed of light squared, and the equivalence principle — all Einstein concepts from SR and GR! — into Newtonian formulas in order to make relativity terms seem to "cancel out" [3].

I also found an essay on Medium [4] whose author wrote an entire relativity-denying book titled Logical Fallacies Of Special And General Theory Of Relativity.

These relativity deniers typically subscribe to some fringe science/pseudoscience such as the "electric universe theory," which claims that gravitational interactions on the cosmological scale are negligible, thus GR must be denied and phenomena like gravitational lensing are explained via other means…usually with the tortured logic and mental gymnastics that we see among the most rabbit-holed conspiracy believers.

It doesn't matter how many sources or references you throw at these people. They refuse to believe that the GPS incorporates SR and GR time corrections. Is there any way to comprehensively debunk the claim that it doesn't?

Edward Current said:
It doesn't matter how many sources or references you throw at these people. They refuse to believe that the GPS incorporates SR and GR time corrections. Is there any way to comprehensively debunk the claim that it doesn't?
Click to expand...

It seems unlikely because it's such an esoteric topic where the critiques seem to be based on a creative misunderstanding of it. So you'd have to teach fairly advanced physics to someone who thinks they know better.

With GPS, this came up a while back with Flat Earth, and I think at the time it was suggested you could examine the code in the GPS firmware to see the steps of the algorithm used.

As you note, some relativistic time corrections are done in the satellites themselves, by having the clocks tick slower to counteract the effects of being out of the gravity well (time runs slower down here, which means that for us, it looks like the satellites are sped up, so we need to slow them down to match times. Of course, there's no way of verifying this for regular folk.


20.3.3.3.3.1 User Algorithm for SV Clock Correction.
The polynomial defined in the following allows the user to determine the effective SV PRN code
phase offset referenced to the phase center of the antennas (∆tsv) with respect to GPS system time
(t) at the time of data transmission. The coefficients transmitted in subframe 1 describe the
offset apparent to the two-frequency user for the interval of time in which the parameters are
transmitted. This estimated correction accounts for the deterministic SV clock error
characteristics of bias, drift and aging, as well as for the SV implementation characteristics of
group delay bias and mean differential group delay. Since these coefficients do not include
corrections for relativistic effects, the user's equipment must determine the requisite relativistic
correction. Accordingly, the offset given below includes a term to perform this function. 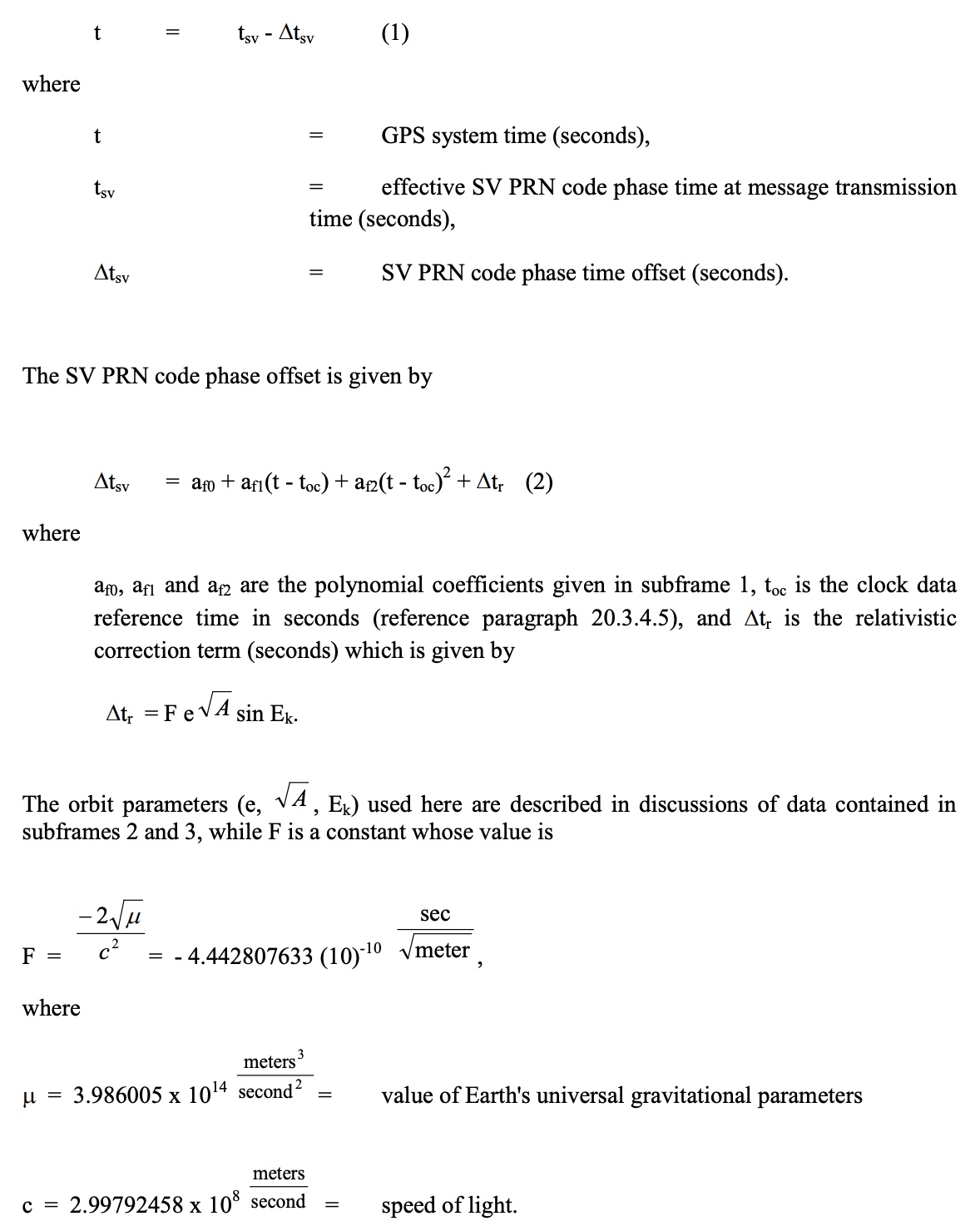 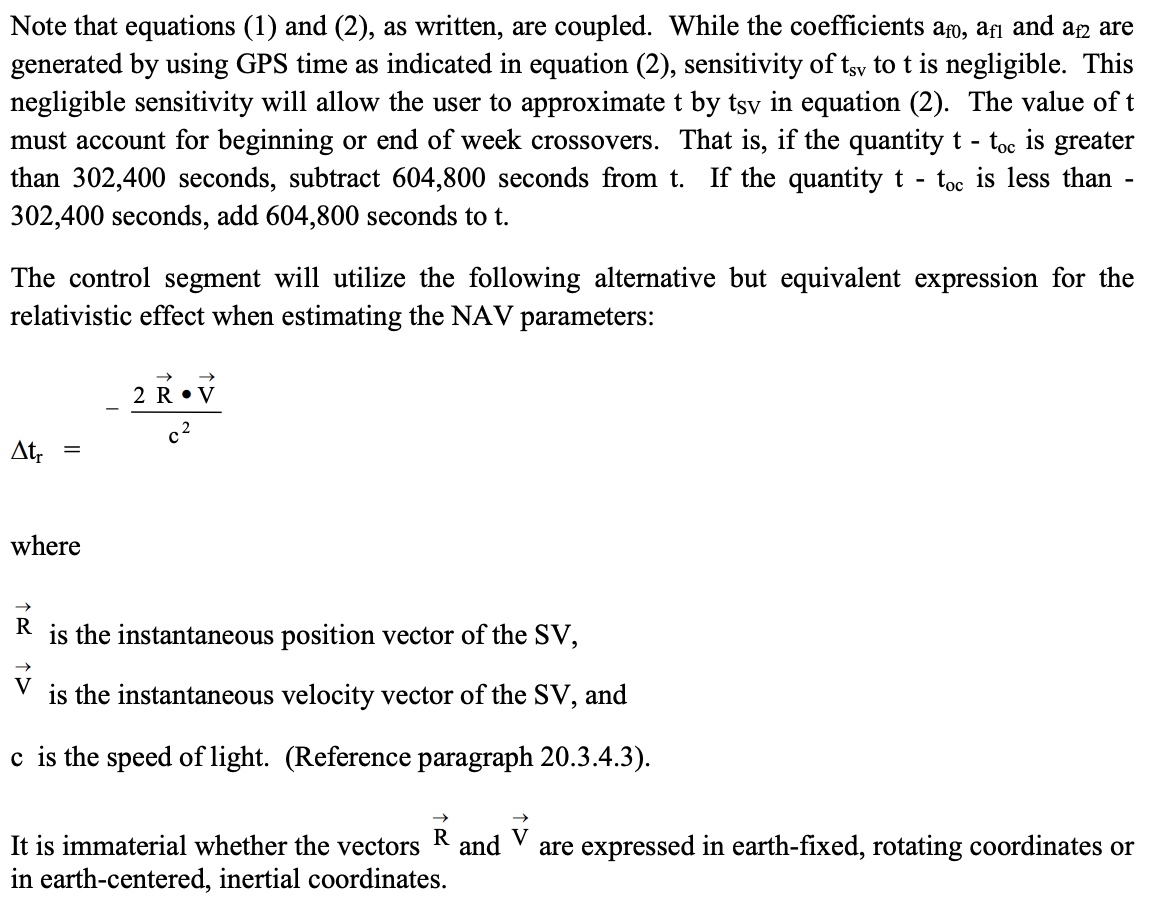 So all you'd have to do is demonstrate why the delta-Tr term is needed, and then show that it's used in the code of some receiver.

Although really the fact that it's in the spec should be enough.

While conspiracy theorists might question the programming code in the satellite clocks, they surely can't question the "code" of muons? We observe muons traveling for much longer through the atmosphere than they exist at rest here on earth. This is predicted/explained via special relativity only (which requires only high school math).

If no time dilation exists, then those muons should decay in the upper regions of the atmosphere, however, as a consequence of time dilation they are present in considerable amount also at much lower heights.
Click to expand...

Then there is the famous Hafele–Keating experiment performed with atomic clocks on jet airliners.

The Hafele–Keating experiment was a test of the theory of relativity. In October 1971, Joseph C. Hafele, a physicist, and Richard E. Keating, an astronomer, took four cesium-beam atomic clocks aboard commercial airliners. They flew twice around the world, first eastward, then westward, and compared the clocks against others that remained at the United States Naval Observatory. When reunited, the three sets of clocks were found to disagree with one another, and their differences were consistent with the predictions of special and general relativity.
Click to expand...

The differences are small (nanoseconds), since the airliners are close to earth, traveling slowly and not for very far. For satellites the problem is far worse.

Special Relativity predicts that the on-board atomic clocks on the satellites should fall behind clocks on the ground by about 7 microseconds per day because of the slower ticking rate due to the time dilation effect of their relative motion
Click to expand...

If these effects (SR and GR) were not properly taken into account, a navigational fix based on the GPS constellation would be false after only 2 minutes, and errors in global positions would continue to accumulate at a rate of about 10 kilometers each day! The whole system would be utterly worthless for navigation in a very short time.
Click to expand...

That's a better source than anything I had found.


qed said:
they surely can't question the "code" of muons
Click to expand...

qed said:
Then there is the famous Hafele–Keating experiment
Click to expand...

I'm sure they can and do...something about the electric charge of the ionosphere and whatnot. They believe the entire universe is explainable via electricity, after all. And they worship Tesla as a god. As for Hafele–Keating, they will claim that the same results are achievable via Newtonian calculations. I even had a guy claim that all references to "relativistic time corrections" in the GPS was referring to Galilean relativity!

I think I will put this in the same basket as flat earthers — not interesting enough of a "controversy," and the followers too far gone in their beliefs to even bother engaging them.

There seem to be two contradictory arguments:

qed said:
There seem to be two contradictory arguments:
Click to expand...