Fake quote? "World events do not occur by accident. They are made to happen [...] by those who hold the purse strings" (attributed to Denis Healey)

This quote pops up on conspiracy theory websites, in facebook posts, and on the cover of at least one book. The full quote is:

"World events do not occur by accident. They are made to happen, whether it is to do with national issues or commerce; and most of them are staged and managed by those who hold the purse strings" - Denis Healey, former British Defence Minister
Click to expand...

I can find no record of Healey having said or written this - many of the pages repeating the 'quote' state that he "wrote" it - and it isn't one that has been removed from or disputed in WIkiquote, as far as I can see.

The oldest source I can find is from a book review dated November 2nd, 2007:

The book in question is Daniel Estulin's "The True Story of the Bilderberg Group". The quote, however, isn't in the version of the book I was able to check (Spanish pdf) but may appear in later English language editions.
Last edited: Apr 23, 2020

This obituary of Healey in The Independent newspaper has a generous selection of Healey quotes.
https://www.independent.co.uk/news/...and-quips-from-the-labour-giant-a6678361.html
My favourite is 'virago intacta' as a description of Margaret Thatcher. You wouldn't get that level of wit from many politicians today (with one obvious exception). The 'world events' quote is however conspicuous by its absence. I don't find it incredible that Healey would have said it, but the absence of any attributed source is grounds for suspicion.

Rory said:
The book in question is Daniel Estulin's "The True Story of the Bilderberg Group". The quote, however, isn't in the version of the book I was able to check (Spanish pdf) but may appear in later English language editions.
Click to expand...

The greatly expanded 2007 English language version is available to borrow at archive.org and it is included there, on page 1: 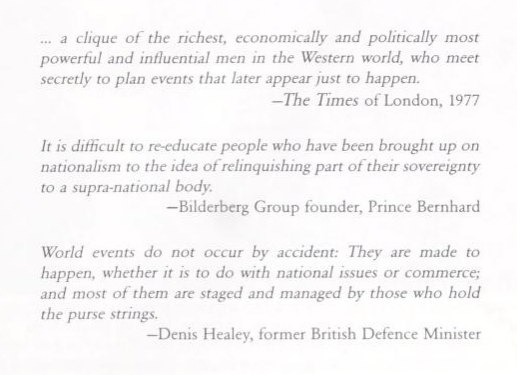 Of course, there's no time or place given for when these words were supposedly spoken.
Last edited: Apr 23, 2020

Healy was a communist for 3 years in his youth. The significance of the quote -- if it is genuine-- varies sharply with whether it was coined before he took goverment office, or afterwards. If before, it's just idle speculation with no weight.

Well, before we debate why he said it, or what he might have meant by it, let's find out if he did actually say it first.

it's not on wiki quote. and nothing similar to it (thinking it might be a paraphrase, im looking for similar sentiments)
https://en.wikiquote.org/wiki/Denis_Healey

@Rory does the sentence structure read ok to you as a Brit? the "do with"... is that how Brits would say that?

deirdre said:
Does the sentence structure read ok to you as a Brit? the "do with"...?
Click to expand...

Yep, reads fine to me. Though now you point it out, maybe it reads more like something that was written rather than spoken.

Rory said:
Well, before we debate why he said it, or what he might have meant by it, let's find out if he did actually say it first.
Click to expand...

My idea was that if you can push the "when" back far enough, the "if" won't matter too much.

Rory said:
maybe it reads more like something that was written rather than spoken.
Click to expand...

i'm taking back my comment. what is happening is my brain is seeing to do and i'm reversing it automatically even when I concentrate.

although 'do' should be 'due'. due to. ignore me.
it has to do with my dyslexic brain issues < see what I did there?

@Rory after watching (auto play) a bunch of his interviews and debates on youtube, I see no reason his statement if true would be meant maliciously. I'm wondering if the topic is "global recession". but ive tried a bunch of rewordings (most of these quotes paraphrase somewhat) and still haven't found anything even resembling that quote.

the quote says british defense minister, but all the youtube interviews etc are about UK budget stuff. they are calling him "Chancellor" and he was raising taxes on cigarettes and beer etc, so he must have had a financial/budget position in the UK too.. so that quote doesn't seem that odd to me, but I haven't found it. he gave alot of interviews! which probably wouldn't be transcribed online.

highly suspicious noone puts a source for the quote though.

some video descriptions call him this

Chancellor of the Exchequer

edit add: oh and in his interviews when he was retired and old he kept reiterating that today is different because "class" was dominate in his day. he worked/championed for the have-nots. so again, i dont think the "purse-strings' comment seems that odd.

Yeah, he was both: