This video and several others from this channel ( Idaho Picker) is attempting to imply that sea foam contains methane and that this phenomenan is emerging worldwide. Any comments.

Staff member
It's nonsense, sea foam is just caused by the aerating action of the waves combined with decaying organic matter. i.e., it's air bubbles in gunk. It's always happened:


Sea foam, ocean foam, beach foam, or spume is a type of foam created by the agitation of seawater, particularly when it contains higher concentrations of dissolved organic matter (including proteins, lignins, and lipids)[1]​ derived from sources such as the offshore breakdown of algal blooms. These compounds can act as surfactants or foaming agents. As the seawater is churned by breaking waves in the surf zone adjacent to the shore, the presence of these surfactants under these turbulent conditions traps air, forming persistent bubbles which stick to each other through surface tension. 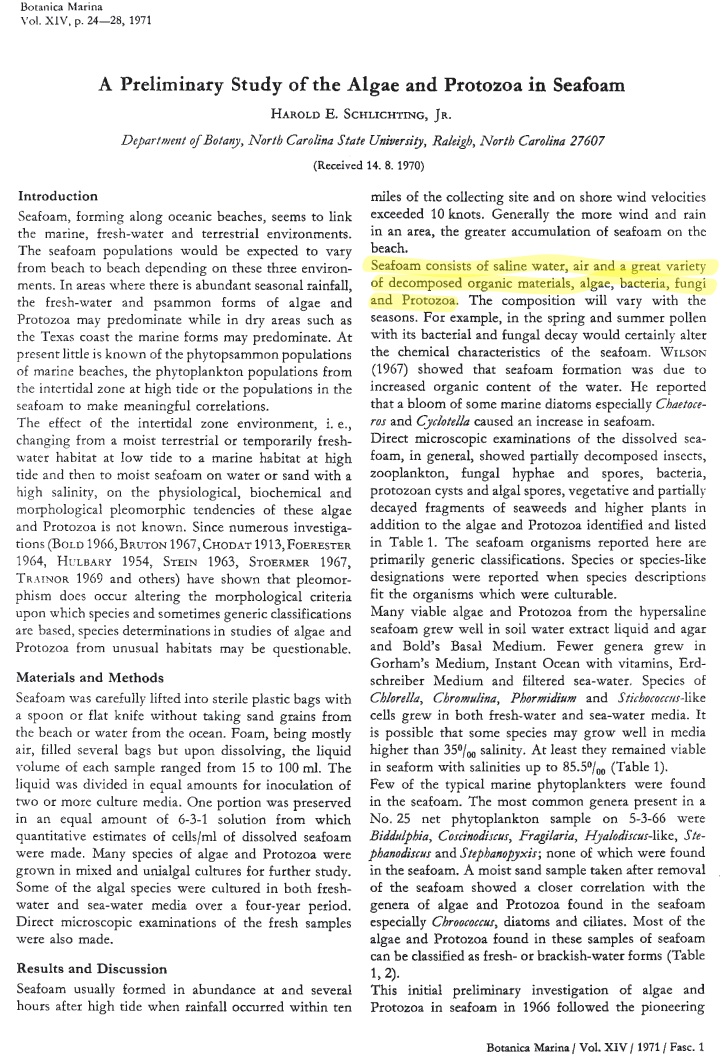 However, he might be thinking about the Arctic Methane problem, which is real, and some scientists are very concerned about it. Just entirely unconnected to this foam.


Arctic methane release is the release of methane from seas and soils in permafrost regions of the Arctic. Whilst a long-term natural process, it may be exacerbated by global warming. This results in a positive feedback effect, as methane is itself a powerful greenhouse gas. The feedback of the undisturbed process is comparably weak, however, because the local release leads to a warming spread over the whole globe.

Thanks for the quick response Mick. It was the idea of methane showing up in sea foam which I have been unable to find any proper scientific basis for his claim. But then again this individual (Idaho Picker) is also referencing haarpstatus.com in other videos he has made, which is nothing but fabrication as you know. This is the link for all of his vidoes. http://www.youtube.com/user/idahopicker?feature=results_main Its getting so everybody with video software is trying to make a name for themselves and makes these fear based postings with no real science involved. You have debunked many of these common topics in here such as "chemtrails". Thanks again.

Light a match, let's find out.

Staff member
He's taking a bunch of unrelated things and trying to connect them. The Mythbusters experiment creates foam because of the soapy water, not because it has methane - any gas would do. The pig foam issue was local bacteria. The methane coming out the ground in Siberia was just regular methane coming out of the ground.

He claims the sea foam is "animated and stands nice and tall", hence it must be methane (lighter than air). However you don't see any of it floating up into the air like the Mythbusters foam. It's just regular foam, and is acting like regular foam (in fact a lot of it is pretty dense and dirty). It's just regular air foam, like here, it piles up to several feet hight, and stands nice and tall.

Deeper into "idahopicker" videos you will see a few more vids showing this foam. The Australian one was quite interesting.

Staff member
If it were methane we'd quickly be having reports of beaches blowing up when someone goes for a smoke.

So what do you think is the motivation behind people who make videos like this? It seems like they take some news with unrelated events or phenomenen and tie it together with a gigantic leap into some story that has absolutely no real proof.

TruthSeeker said:
So what do you think is the motivation behind people who make videos like this? It seems like they take some news with unrelated events or phenomenen and tie it together with a gigantic leap into some story that has absolutely no real proof.
Click to expand...

A) People who think they have special insight. They actually think they have figured something out, and are urgently trying to share the good/bad/important news. You see this a lot with health based things, like orgone, or Morgellons.
B) Hoaxers. People who just make stuff because they enjoy tricking people and/or creating debate.
C) Copycats - just repeating stuff they saw elsewhere. Usually young people who add music tracks over a mashup of other people's video "evidence".

D) People who make money from it - but there's only a few people who can get enough of an audience to even make a small amount of money.
E) People with something to sell, but they are usually pretty obvious.

Given the random nature of the things he strung together, I'm going with B - hoax for now. But I've not looked at his other videos.

[Edit] now I have, and am leaning slightly more towards A.

I agree with your pick of reason A. Thanks

Some people just do it for ego gratifiation, to get their chance at fifteen minutes of fame, not even necessarly believing it or any other motive, just pure attention seekers.

Jay Reynolds said:
Some people just do it for ego gratifiation, to get their chance at fifteen minutes of fame, not even necessarly believing it or any other motive, just pure attention seekers.
Click to expand...

Yeah, that would kind of be option B.

Sometimes of course there's a bit of a combination. Like some of the chemtrail promoters, they believe that something is going on, yet are willing to let untruths persist so as not to jeopardize their following.


we are talking about oil, petroleum, methane, corexit, synthia, etc.!

really Uparrot? i have joined for the exact opposite reason...they know exactly what they are talking about.
U

Just look up the words decayed organic material....It's methane DUH..same as the gas off turds
You must log in or register to reply here.

S
Claim: sticker "glitched" in real life. Fake video or could have other explanation?