Your views on 'What makes a source (of information) reliable'?

From the posting guidelines:


Mick West said:
Back it up - with links and quotes from reliable source.
Click to expand...

This is intended as a 'Meta-level' discussion focused on getting the input/viewpoints of others as to: What makes a source (of information) reliable?

When Googling that phrase there are hundred's of millions of results from various sources, most prominently are the educational institutions and journalism related websites that for the most part concur on certain basics. We can all read those and likely agree on most of the criteria, however it would be interesting to get people's (subjective) input on why they might find some sources reliable versus other sources that they think are unreliable. Ideally it would be interesting if folks would also share how they might classify themselves (ie... Debunker, Conspiracy Theorist, Liberal, Conservative, College Graduate, High School dropout, etc... ).

noun
1.
any thing or place from which something comes, arises, or is obtained; origin: 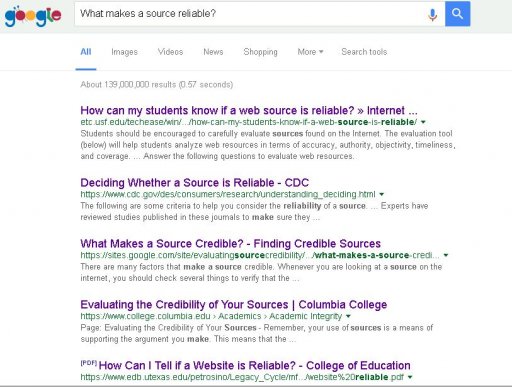 I would classify myself as a Debunker, a Liberal (open to new behavior or opinions and willing to discard traditional values), College Grad in the Sciences.

Whether the source is a website, person, News outlet, etc... I consider the track record they have in being factual and how they address any instances where they had been in error. Some friends I trust as a source more than others, based on that criteria. The same holds for websites and News outlets. People make mistakes and errors from time to time, but how often errors are made and if they readily admit to and address those errors has a great bearing on how much I trust the source. I like Metabunk as a source because when there is a factual error, it gets addressed by the membership, and generally speaking the reasons for the correction and citations are provided to back up the claim.

This is intended as a 'Meta-level' discussion focused on getting the input/viewpoints of others as to: What makes a source (of information) reliable?
Click to expand...

That's a seriously subjective question, methinks! Personally, there are two aspects which I consider when reviewing the source of information -- filtering and bias. "Filtering" has been around since there was news, it's called "editing". Editors make decisions every day as to which story will run or not, and what information within the story is shared or not. In the days of print media, space was a factor, as well as the usual economic (for the newspaper) ones (i.e., advertising -- will this story help or hurt our advertising revenue). Physical space to run a story is not so much a factor nowadays (although you can question the overall placement of a story on the website), so a question I ask is whether or not a source is consistently filtering based on some agenda other than economics of space-to-print the story? That leads to second factor -- bias. That bias may come from both the source (i.e., filtering, editorial policy, etc.) as well as from the reader (confirmation bias, i.e., that a source is "reliable" because it is reporting information that fits into my expectations and worldview). With the internet today, I also look at circular news. Are sites that espouse the same position giving each other credit for posting something?


I look at the web-addresses in top google search results....as sometimes they are spurious.
.....even in Google Scholar

but I still want to see another viewpoint......even if I'm likely not to agree (pre-judge)

Critical Thinker said:
From the posting guidelines:
Click to expand...

When I wrote that I was thinking of Wikipedia's usage of the term, like in:
https://en.wikipedia.org/wiki/Wikipedia:Identifying_reliable_sources

Articles should be based on reliable, third-party, published sources with a reputation for fact-checking and accuracy. This means that we publish the opinions only of reliable authors, and not the opinions of Wikipedians who have read and interpreted primary source material for themselves.
...
Source reliability falls on a spectrum: highly reliable sources, clearly unreliable sources, and many in the middle. Editors must use their judgement to draw the line between usable and unreliable sources.

A source is an aggregation of information. The New York Times for example is a source. What makes it reliable or not has to do with the general reliability of the individual sources contained within. It isn't a very deep question if you think about it. An organization considered to be a source is already defined by its contributors, and what they have in common.

What counts in considering any writer, or group of writers, as credible is the setting on your BS detector. For instance, when a writer is trying to convince you of something by claiming to be scientific, you can disregard what they say if the information is conveyed as "proved" by science. An educated person knows science hasn't anything to do with proving things. Another important indicator is if the information in question is written from a defensive point of view, again often using science, but in this case suggesting that "mainstream science" won't touch the information because of such things as fear of loss of government funding, or the government is trying to prevent mass panic, or there is a corporate conspiracy to suppress the information that could undermine their ways of doing business, or big pharma is suppressing the information for some reason.

Political reporting, where objective "facts" are less certain, is necessarily skewed by the biases of the writer. But a good writer knows this and makes an attempt to frame her opinions in a large enough context that the reader has room to make their own judgements.

In short, a good source of information aims to inform, not indoctrinate. One can learn to recognize that.

Mick West said:
When I wrote that I was thinking of Wikipedia's usage of the term, like in:
https://en.wikipedia.org/wiki/Wikipedia:Identifying_reliable_sources

Articles should be based on reliable, third-party, published sources with a reputation for fact-checking and accuracy. This means that we publish the opinions only of reliable authors, and not the opinions of Wikipedians who have read and interpreted primary source material for themselves.
...
Source reliability falls on a spectrum: highly reliable sources, clearly unreliable sources, and many in the middle. Editors must use their judgement to draw the line between usable and unreliable sources.

When I was studying journalism we had it drummed into us that where ever possible only relay on primary sources. EG if a local councillor says x, or a scientist says y, then you can only know for certain it's true if - a) you get the information direct from the horses mouth and b) there is evidence to back up what they are saying (raw data, etc). Every other form of information should be considered at least secondary.

Any journalist, in any media passing that information on to the consumers (readers, viewers, listeners etc) will automatically become a secondary (or whatever) source themselves. Therefore a good journalist will always refer to his primary sources in their passing on that same information, so that what is presented can be challenged and / or verified by those further down the information.

Sadly these days, in many cases the journalist doesn't always, by neglect or design, make his sources all that clear, and many consumers of information are too damned lazy to check or at least enquire as the validity of those sources.
C

I don't believe in labels or even taxonomies Still I guess I'd describe myself as a self educated metaphysician.

I believe that ultimately we are all wrong and where we appear to be right we take that stance for the wrong reasons with bad or irrelevant information. Sources can only be judged on their internal consistency. News sources, the media, always have axes to grind and lack internal consistency.

Really we shouldn't take even the highest quality sources as gospel since even writers who can pen internally consistent material are frequently wrong from many perspectives.

This lack of good sources for everything from recipes to politics to science exists largely because we lack a proper language in which to express statements that are true after each individual deconstructs them in a unique way. We don't recognize the limitations of language or science because language and beliefs fosters a perspective from which we always see what we already believe. We play "Chinese telephone" as children and never factor this into our thinking again.

Most of what's called "news" in the US is just invented to push some belief of the relatively few who make it up. "Events" rarely happen as they are portrayed and even when they did the "story" was selected not because it's "news" but because it furthers an agenda. Suddenly TV anchormen are using the exact same bad grammar and mispronunciations all over the country because they make no attempt to hide it. "There is traffic jams in Beijenj" doesn't mean this is important or that China is having trouble with infrastructure nor does it mean they changed how verbs are used in sentences. It means they changed the way Americans are supposed to pronounce "Peking" again this week. It's not news, it's not real, and it's not internally consistent.

Here is a Harvard link, explaining how, why, and when to use "Sources", for college essays, research, or papers....

Social scientists in some fields, such as psychology and economics, also consider empirical journal articles (articles that describe the results of original research) published in peer-reviewed journals to be primary sources. These articles provide raw material for other scholars, who may then raise questions about the published results or develop new research based on these results. Social scientists in other fields, such as anthropology and history, however, do not consider research articles primary sources because articles in these fields do not typically present raw data. For these social scientists, journal articles would be secondary sources. For all social scientists, literature reviews and published books are considered secondary sources.

Natural scientists count as primary sources empirical articles published in peer-reviewed journals. These published results of experiments and analyses of data provide the raw material for other scientists to consider as they pursue their own research. Secondary sources in the natural sciences include literature reviews and books

Content from external source
You must log in or register to reply here.
Related Articles
Matching GOES-16 or other Geostationary Satellite Views in Google Earth
Views of Toronto from Hamilton and Fort Niagara Illustrate Earth's Curvature
Stunning views of both sides of a cloud layer
BBC: "Too much weight to fringe views", says review
New tool ChimeIn makes all web sites commentable
Debunked: Boston bombing recovery photo makes no sense from medical point of view
How Dutchsinse makes his "HAARP ring" forecasts....
The Anti Media, makes bogus claim that "CDC admits Ebola could be airborne"
Debunking just makes people believe the bunk - 'motivated reason'
What makes something "debunked"?
Debunker makes a cloudbuster....
Poll . . .What makes people who believe in the Chemtrail conspiracy tick. . ?. . Choo
The UCC makes our Constitution irrelevant?
Debunked: "you become the leader of a country, someone else makes all the decisions."
Fata Morgana as a Possible Source of UFO Sightings
Unidentified Satellite/Star in Southern Sweden 2011?
Some proof The Moon is not it's Own Light Source
Clinton rally numbers manipulation of photograph, I'm seeking the source
Dr. Alan Greenberg....find the source ?
Finding the Original Source in a World of Aggregators, Shares, and Reposts
Original source for Neil Finlay (Canadian physicist) talking about chemtrails?
Claim: MH370 "thrown around like fighter jet in a bid to avoid radar source"? [Dubious]
Flight Magazine- Source of Aviation history
This is going to be a source of some guff
Share:
Facebook Twitter Reddit Pinterest Tumblr WhatsApp Email Link