I take it we are supposed to believe there is special significance to WTC 7? It isn't the only building which had a structural failure due to fire: "The major fire-induced collapse that occurred in WTC 5 involved the portion of the building that had Gerber framing (girder stubs welded to columns, and simply supported central girder spans with shear connections to the ends of the stubs (Figure 2)), but not other areas of the building where girders spanned the full distance between columns. This fact, and observations at the site suggesting that the failure was early in the fire, raised the possibility that this structure had a vulnerability that led to premature failure, perhaps during the heating phase of the fire." http://www.structuremag.org/article.aspx?articleID=525

In what way was WTC7's collapse symetrical? Chris Mohr explains in this video that it wasn't : http://www.youtube.com/watch?v=qnoto0GyEkM
Click to expand...

Could you please point out where the "The major fire-induced collapse that occurred in WTC 5 ", actually was as I can only see what appears to be collision induced collapse from WTC's 1 & 2 ejecta which huge chunks of, can clearly be seen at the collapse points? 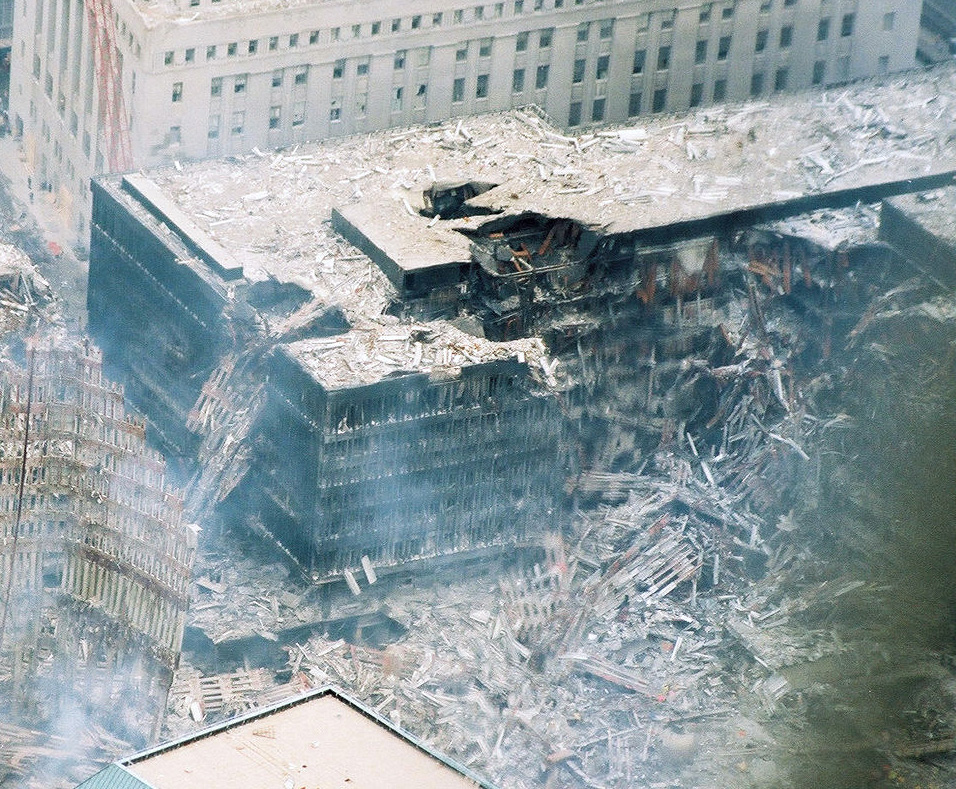 Perhaps these collapsed sections had absolutely nothing to do with the raging fire and had 5 not been hit by debris would have been burned out but with minor or no collapse.

Even so, it is a testament to the robustness of 5 that a good 85 to 90%, (personal estimate) remained standing despite a protracted blazing inferno and multiple massive strikes.

And yet 7 is supposed to have collapsed completely from relatively small fires and minimal ejecta damage. 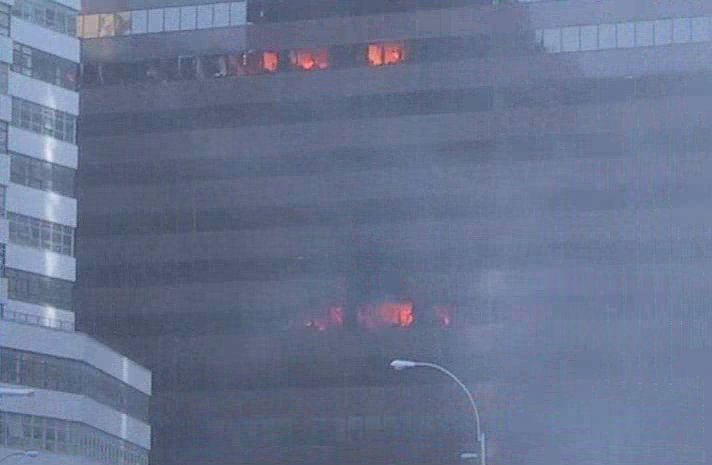 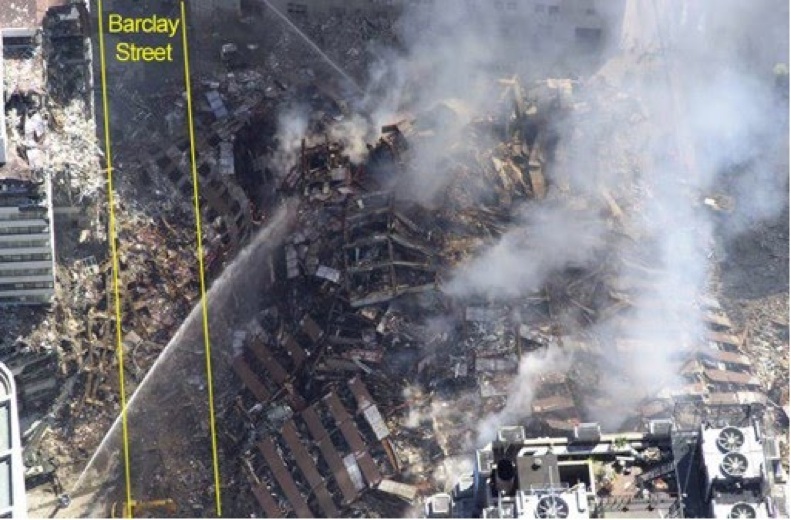 Well-done for the non-mention of the word "footprint". Well, you couldn't.

However the non-mention of the fact that WTC7 was five times higher than WTC5 removes my praise.

One can hardly compare the two. When WTC7 failed at the thirteenth floor, column 79 was carrying its proportion of the weight of thirty-three stories above it.

Oxymoron said:
That's been dealt with pretty comprehensively... and yes, i think it clearly was in it's own footprint as much as the laws of physics allow that to happen.
Click to expand...

I rather hoped you would come up with something useful, like pointing out the bits that were 'fire induced collapse'? But still, guess that is beyond you.
Click to expand...

Yes, beyond me. I was only comparing the different loads they experienced, namely the thirty-three floors' worth of difference. A small point, I know, only important to engineers.

Strange! You didn't say that when RP was astroturfing a thread and he compared them. Wonder why?
Click to expand...

I could have missed that. He probably was saying what I would have said, for he likes a bit of logic.

I'm still wondering why and how these FDNY workers were incorrect (according to conspiracy theorists) about the magnitude of WTC7 fires. As much as they would like to think, we don't have pictures of every fire. Just because fires aren't raging outside the windows, doesn't mean they weren't raging inside the building. Again, that is information that the FDNY would know and information we would not. Rightfully so. But take a look at these quotes.

Link to FDNY testimony courtesy of The New York Times.

There are plenty more, but I will spare you.

gerrycan said:
I quoted you from the thread that is about wtc7 jazzy, not this one.
Click to expand...

Where you stated: "the fires in WTC5 were more intense than those in WTC7" in an effort to imply - whatever - ignoring the difference between NINE floors and FORTY-SEVEN floors.

I believe this thread has sprung from that one.
Last edited: Oct 8, 2013

Be (deliberately?) obtuse if you wish but if anyone with any engineering experience and understanding of physics, examines the facts in the thread
https://www.metabunk.org/threads/debunked-wtc-towers-fell-in-their-own-footprints.1226/ and reads what I said "it clearly was in it's own footprint as much as the laws of physics allow that to happen", they can see that all I have said is the truth.

But perhaps you know better? Perhaps you have pictorial evidence of the collapse of a 50 storey building which defies the laws of physics and remains entirely within it's own footprint. If so please feel free to post it on the appropriate thread.

Yes, beyond me. I was only comparing the different loads they experienced, namely the thirty-three floors' worth of difference. A small point, I know, only important to engineers.
Click to expand...

So even you cannot attempt to show the 'fire induced collapsed sections'? Come on Jazzy, you are a lot more creative than that. It doesn't have to be logical. Any old nonsense will do. Come on, you can just accuse anyone who disagrees of being ignorant, like you normally do.

As an alleged engineer, (not related to anything to do with high rise building construction and collapse scenarios I might add), I would have thought you would have been better aware of the significance of the height in relation to likely collapse.

Buildings above ten floors have never completely collapsed due to fire, so it appears your attempt to compare apples and custard results in the high rise buildings being the proverbial apples, whilst the 1 to 10 storey buildings are the proverbial custard buildings. Hence the apples 1, 2 and 7 collapse as if they were demolished, (7 with hardly any visible fire) and yet the custard building, (5) which was an inferno remains standing. Interesting?


This issue in fact raises an interesting point. When one examines the list of other steel structures that have collapsed from fire that are often cited by debunkers, one thing immediately catches the eye: almost none of them are high-rise skyscrapers. The only building cited by debunkers that is a high-rise is the Windsor Tower in Madrid, and this building did not suffer a complete collapse. Jim Hoffman has examined the partial collapse of the Windsor Tower [4], and notes that all this incident proves is that a huge building-consuming fire, after burning for many hours, can produce the collapse of parts of a building with weak steel supports lacking fire protection, and that the collapse events that do occur are gradual and partial. Hoffman has also examined the McCormick Place roof collapse that is often cited by debunkers, and has shown why this structure is also not comparable to the WTC buildings [5]. Aside from the Windsor Tower, none of the other structures cited by debunkers are high-rises, and some of them are not even buildings.

Here is 7 after the penthouse has gone and just a few seconds from being a small pile on the floor. Can anyone put their hand on their heart and lie straight faced that this "is a building that is fully involved in fire and collapsing chaotically" 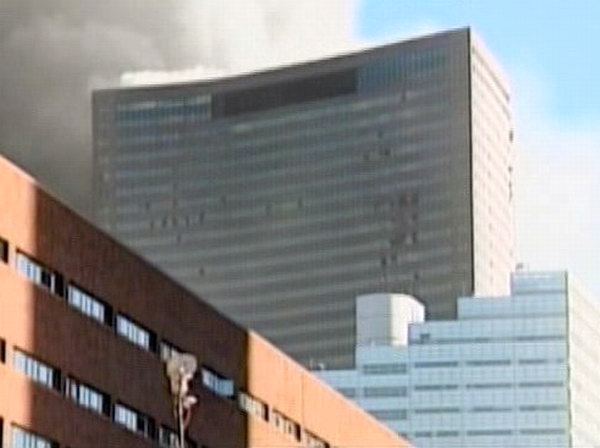 One can hardly compare the two. When WTC7 failed at the thirteenth floor, column 79 was carrying its proportion of the weight of thirty-three stories above it
Click to expand...

Strange! You didn't say that when RP was astroturfing a thread and he compared them. Wonder why?
Click to expand...

I could have missed that. He probably was saying what I would have said, for he likes a bit of logic.
Click to expand...

Yes it is on par with your historical logic processes. A 'debunker' logic? Change it to suit your position as required?

So on one thread it is perfectly valid, (according to you), to compare 5 and 7 to 'prove' that 7 could have collapsed by fire as per the NIST flawed story;(by calling partial collapse of 5 by impact, "fire induced collapse"), but it is incomparable to use it to show, (much more rationally), that it is extremely unlikely that 7 could have collapsed like a demolition due to 'mostly non visible' fires and the alleged/theorised beam walking off a column support plate.

Well I must take my hat off to you for persistence, (far better than RP who appears to have legged it), but whilst it may be true that 'if you tell a lie often enough people will believe it', it doesn't work on everyone and in this case, most of the World see it for what it is... an out and out fabrication, which they cannot even release the data for because then everyone would see the Emperor has no clothes.
Last edited by a moderator: Nov 20, 2013

"...because then everyone would see the Emperor has no clothes."
I think pretty much everyone is naked in this scenario Oxy.
No-one possesses the Special Robe of Omnipotent Insight.
You must log in or register to reply here.