Woody's observations of contrails in MN

Joe said:
Thats what they do along with little innuendos on your lack of understanding . basically insulting you . Keep it up and dont give up .
Click to expand...

I just don't understand why it seems to be so hard for Woody to identify planes. I'm not even really interested identifying planes, and I can sit on my back deck and watch planes flying over the island and identify them easily using FlightAware. What is all the huge photos? Woody himself said earlier in this thread "I'm not sure on this one either, it looked like all the other contrails out there this day." If it looked like the other contrails, what's the problem? Why was this plane, that had the same contrails as the others, unidentified, and the other are identified. And what does it mean? I think he's making everything WAY too complicated for himself.

Woody said:
I do not agree but I do agree that I should have taken a shot of that flight to compare them, I won't make this mistake again. Had I, it would have silenced the audience, this is why next time I won't miss it. Look at the above post, these are the contrails they are all making this day.
Click to expand...

Woody,
It is very clear that you are confusing yourself over distances involved in regards to aircraft and contrails. You are not going to silence any audience simply because you are misinterpreting your 'evidence'.

Download FlightRadar24 Pro app for your phone? I suggest that you try it out and get a grip of reality in regards to what you think you are observing.

Augmented Reality makes it possible to point the camera to the sky and view information about air traffic above your head. AR view uses both compass and gyro, if available, for best precision.
Click to expand... 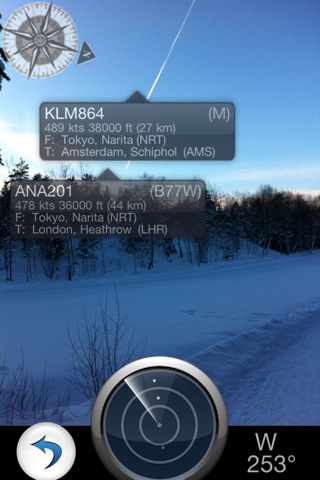 It couldn't be simpler that that to test it out. It even provides the distance that the aircraft is in relation to your location. Will you try it out or will you come back with an excuse?
Last edited by a moderator: Nov 20, 2013

Youtubers Max Bliss, PeeKay, CajunMiracle and many more are able to identify the commercial flights producing persistent and spreading contrails.

What is woody missing?

I took the following photo yesterday in Melbourne Florida at 8:30AM. Winds at the tropopause were out of the NNW. Southbound flights were flying in cirrus clouds and leaving heavy trails. Northbound flights were reducing the headwind and staying out of that layer of air and were not leaving persistent trails. The three newest trails in the photo were all from commercial flights from the NYC area to the Miami/Ft. Lauderdale area. Since flights were traveling along the wind instead of across the wind the trails lingered instead of drifting off-shore. 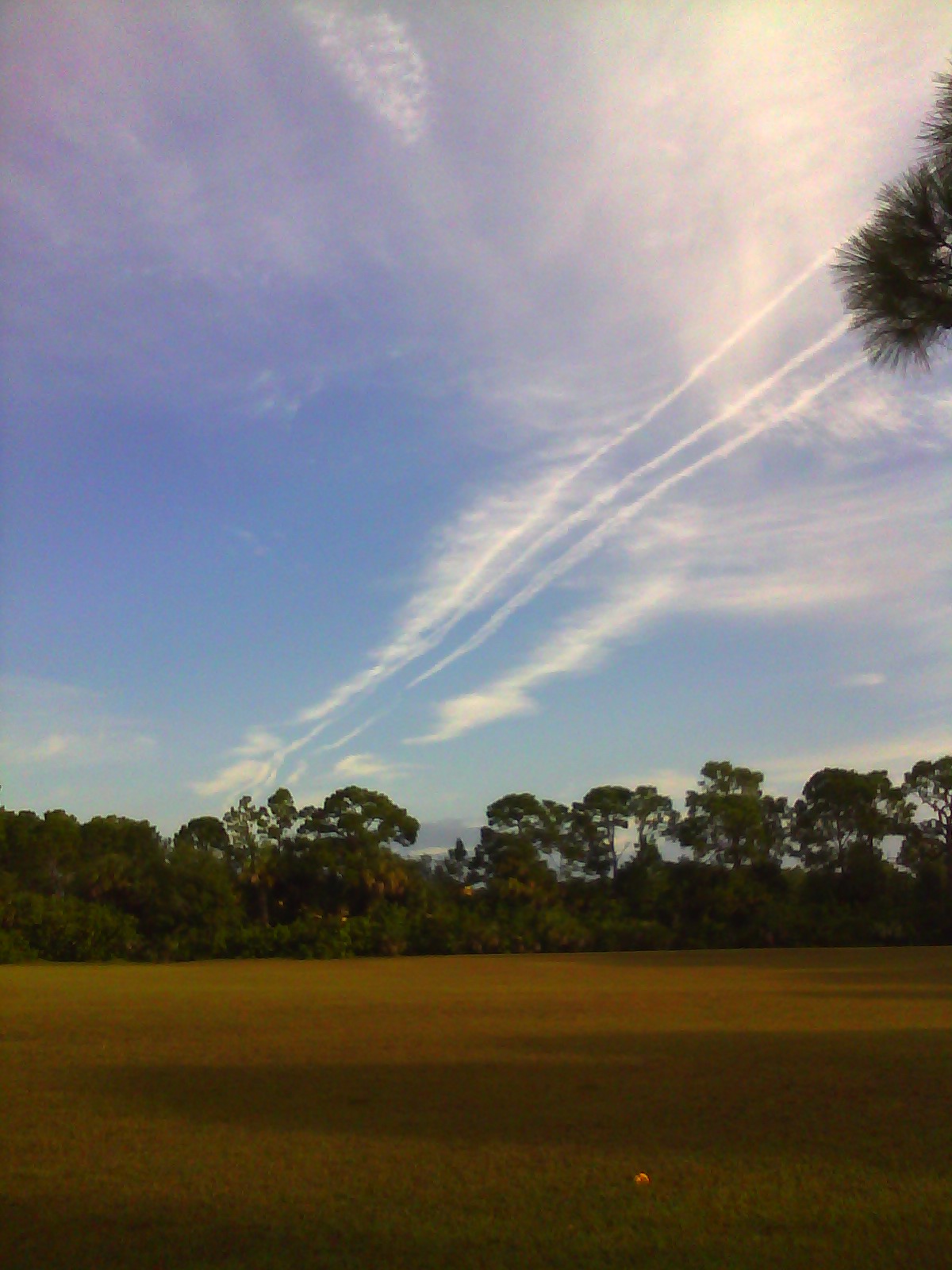 At about 1PM I was on Lake Blue Cypress in Indian River county about 30 miles south of the 0830 photo. The trails were still drifting by and were very aged. 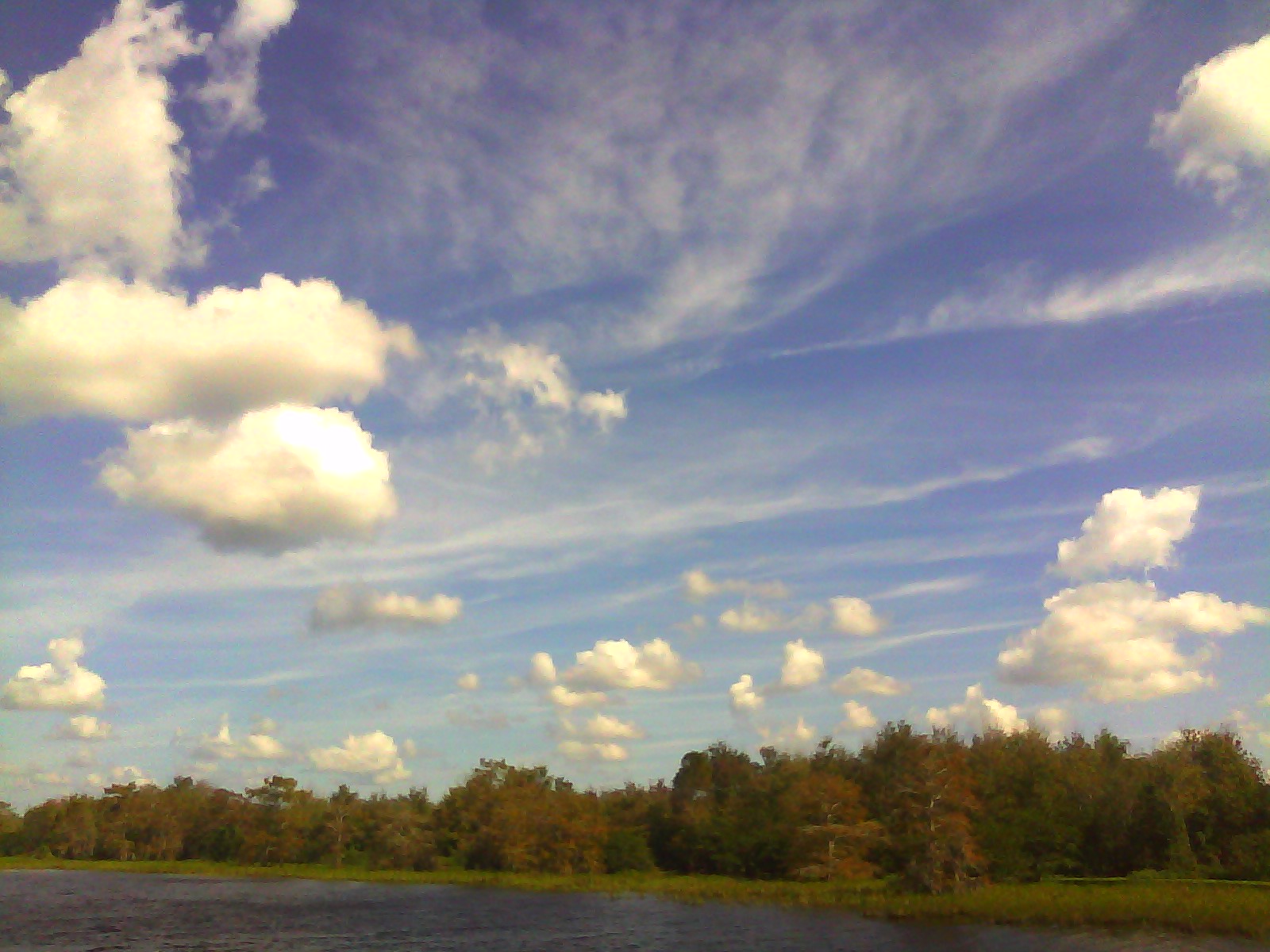 Most of the ones I tracked were infact commericail flights . So im not sure what he is missing ?

I think Woody is not estimating the direction of the trails correctly.
Just because the trail is approaching the horizon to the northeast of him, it does not mean that the trail direction is northeast.

Haven't been here for a while, and after traveling for some time I can tell you that there are two different types of trails in the sky on any given day here in the upper Midwest and they are very evident here in comparison to other parts of the nation. Two things needed for clouds, water vapor and particulates. When an aircraft emits their fuel there is also water vapor within the exhaust. This vapor is instantly cooled where deposition takes place making the water vapor (gas) crystallizes into a solid state by-passing the water state. These ice crystals then go through a process of sublimation returning to a gas state bypassing its liquid state. Water continuously does this in the atmosphere, rising in a vapor state, crystallizing into a solid state where gravity takes effect bringing it back towards earth. Its literally a river of unseen water in the sky even on a clear day here in Minnesota and around coastal areas where water is found in mass quantities. If the temperatures are right these ice crystals can maintain for a long period of time. The other formation that is spoken of in this segment is these other trails that exist and are found here daily, yes, two types. Standard ones we see all the time, and the ones that never leave and can be followed for hundreds of miles. These formations are obvious and intensified in the northern jet stream driving it further towards the equator. For every degree the mid-latitude heat belt grows, the weather will alter 69 miles, a 5 degree expansion of this heated belt would mean weather systems, incoming spring and outgoing fall would alter by over 172 miles, 2.5 degrees north and south, 5 degree total. This means Dallas weather would move north, Kansas City would move north, etc, etc. Coastal regions would not be impacted to the same degree with water acting as their buffer to heat. The goal is simple, compress the mid-latitude heat belt by flooding the jet stream, mathematically its suppose to work because global dimming did it by accident. Three years later we are experiencing these effects, and they are still going strong. -20 the other day, -14 when I took this shot, frickin cold for a long time. The power plant in the back ground is Becker Power Plant and demonstrates this deposition and sublimation taking place, and then there are these other trails left by aircraft. Standard contrails were evident by all large aircraft this day that dissipate rapidly.

Is that your own personal theory, or is it based on some references you can share?
Also, why did you post this here? Do you disagree with the OP?

Pete Tar said:
Is that your own personal theory, or is it based on some references you can share?
Also, why did you post this here? Do you disagree with the OP?
Click to expand...

Don't rattle Woody. Praise him and comfort him in his intense personal journey of discovery.

Woody said:
Standard ones we see all the time, and the ones that never leave and can be followed for hundreds of miles.
Click to expand...

Both types of trails are "standard".

Both have always been observed and both are known as being standard behavior for contrails- this has been documented for decades has Mick has pointed out here:

Woody, is the atmosphere static? Uniform across all altitudes and miles?

One often sees 2 or more types of clouds in the same sky...why wouldn't you expect to see 2 different types of contrails?

Woody, [...] you could start using terms such as "polar jet stream" and "sub-tropical jet stream", instead of norther jet stream. [...]
Last edited by a moderator: Mar 2, 2014
You must log in or register to reply here.